On this day in 1981: U2 release October
Steve Iredale

39 years ago today, U2 released their second studio album, October. To mark the occasion, we're revisiting the band's longtime production manager Steve Iredale's reflections on the October tour. It turned out to be hard work – in more ways than one...

“They were very young, but they were extraordinarily intense”

The Slane Festival gig in 1981 was my first U2 show. Thin Lizzy headlined and Hazel O’Connor and Rose Tattoo were on the bill too, so from a musical point of view, it was a very mixed bag. It was the first outing for many of the songs on October. As it was my first U2 gig it was, as you can imagine, very intense for me.

The band had evolved in the studio, and moved on in terms of instrumentation, and the things they were trying to achieve. You had Vinnie Kilduff playing uilleann pipes, which was quite a radical departure when you think of the directness of Boy. They were looking for someone who played uilleann pipes, and Vinnie was a friend of mine, which is how he came to be on the album. Though he wasn’t part of the touring band, he went on to play a couple of shows, including Slane and then, the following January, the RDS in Dublin.

By the standards of what would follow, the crowd at Slane wasn’t massive. I’d previously worked with people like Horslips, at venues such as the National Stadium in Dublin, which held 1,200 people, which was where all of the big stars played at the time. This was very different. Estimates vary but there were maybe 15,000 people in Slane, which was a very big gig for Ireland at the time. It was an orbit-type stage and U2 went on in the early to mid-afternoon. They did about 15 songs, which is quite a lot for a festival set. For me, it was a heck of a way to start – in front of thousands of people. But we made it all happen! 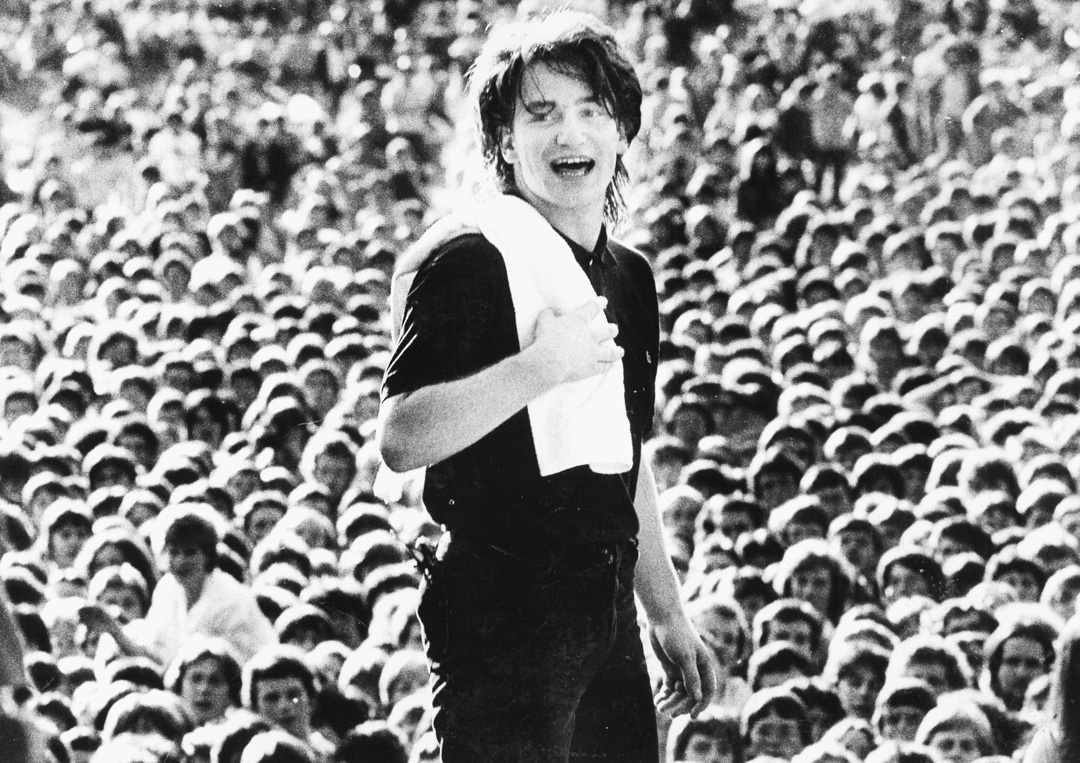 In general, the October album was hard work. I’m not going to say it was easy working with U2 in those days. For a start, I didn’t find the guys the easiest to get on with. They had different ideas as to how they wanted to do things – very different from my experiences with Horslips. They were very young but they were also extraordinarily intense. The fact that they had their own ideas meant that they were demanding – sometimes I found that peculiar where guys of that age were concerned, but we managed to get through. I stayed with them for 20 odd years, so something must have worked!

October was a tough tour – it was somewhere in the region of 105 shows by the time we’d finished. It was one of those long hauls, where the band won incremental battles, gaining fans the hard way by putting the miles and the hours in. And in the middle of that we also ended up supporting The J. Geils Band, who were No.1 in America at the time with ‘Centrefold’. That involved 20-plus days playing to what was a very different audience to U2’s. I wouldn’t say it was a bill made in heaven, but that’s where U2 really shone in my opinion. J. Geils were essentially a Boston bar band, but they had the same agents at Premiere Talent, so that’s how it came about. So U2 had to work really hard to win the audience over. I remember Peter Wolf, who was J. Geils frontman, took note of how hard Bono was working and he upped his game too.

As well as the US, U2 also played across the Continent on that tour. It’s funny the things you remember. We did the Metropol in Berlin and The Psychedelic Furs were on before us. We travelled in the bus back with their crew and it turned out that they had split-up that night – they were so pissed off with each other.

Historically, everyone knows what Adam was like around then. No comment needs to be made there. But I wouldn’t have had a huge amount in common with the other guys in the band.

From a crew point of view at least, there were a lot of Spinal Tap moments. We had a transit mini-bus that we’d got from a guy in Sheffield. The back of the bus was freezing, so the guy we bought it from came up with this ingenious idea of putting a gas heater with a cylinder of gas in the back. When it got cold, we’d fire it up. Gas doesn’t always ignite of course. So one night, the whole van filled with gas and, lo and behold, off she went – a big fireball. Most of the crew lost hair that night. U2 weren’t with us. They were in their own van doing their own thing.

In terms of being focused, they were absolutely the most focused band I’ve been around. They’d come back from the tour and be back in the studio, starting the whole process again. In the long run, that quality was hugely important to the scale of their success.