Patti Smith croaks over the phone in her attractive, husky voice, warm like Southern Comfort. “You’re the guy from Ireland. We’re really glad to hear you’re comin’. If there’s any problem just call me. We’ll take care of you. Don’t worry about anything.”

As it turns out I’m an Aer Lingus day late making the hop, skip and jump to London, finally landing in the Portobello Hotel on Sunday afternoon. Patti’s downstairs on the phone. And since I’ve been invited to hang out, I begin right here and now.

She’s talking to America, discussing the pros and cons of doing a night at the Winterland in San Francisco or spending a week in a club there. Immediately one of the tensions that’s inherent in Smith’s own work surfaces in relation to making the choice. She doesn’t want to aim towards the arty elite that might just be her only audience in the club context.

“They think like, I used to do avant-garde stuff, but now I’m just another asshole rock ’n’ roller. Which is fine...”

But she doesn’t want to avoid that audience totally either. She suggests doing a poetry reading at Berkeley, which she can announce at the big gig.

“Cos I got a poetry book I wanna push,” she adds.

The conversation offers a rare — and somewhat weird — insight into the relationship of business to art. The conflicts seem to be exaggerated in Patti’s case — where she’s so certain of her own integrity as an artist in the first place and yet where she can become so emotional about business. 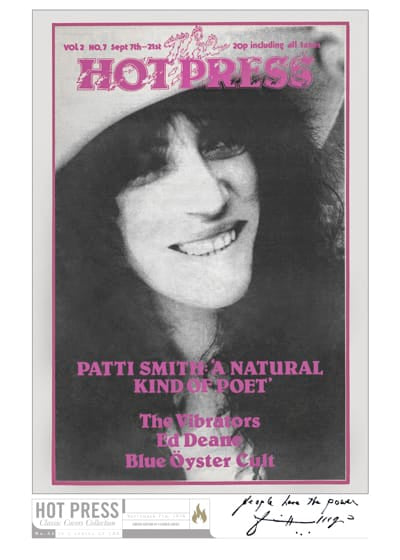 The reason is simple. Rock ’n’ roll as an art form thrives on artist audience contact. It matters in the most immediate sense possible both who you play to, and where. Again, the case is exaggerated in Smith’s case in that she strives to build a really close bond with the fans at any particular gig. So she has to care. She’d be a fool not to.

“You know, I had a revelation last night,” she says, her tone becoming almost enraptured. “We’re really ready for America. Not as one of these super technological groups like Blue Oyster Cult, but as a hot shit rock band. We’re ready for America — I really feel it.”

Travelling backwards and forwards in time, her conversation seems to lose its thread, as she sits up on the couch. Tangents and then back to base: about her book, about the gig the night before, about how she read a poem, about America, about the band. Finally when she comes off the phone, Patti looks shattered.

Which isn’t what I’d expected at all. The image that we’ve been fed of Patti as an undepletable energy-source, always burning at the highest pitch of intensity, setting the kind of pace which would inevitably cause others to crack — well, it was obvious that it just couldn’t be true.

After we’d exchanged introductions, I remarked that she seemed pretty down. “No, I’m just tired,” she said. Thinking of getting a bit of kip before the gig too. Still, she said she had the time and the inclination to talk.

She took up the questioning. The obvious one. “How are things in Ireland?”

I said my bit.

Patti: “This fighting over religion is ridiculous. At this stage of the 20th century. What the country needs is more rock ‘n’ roll. And drugs. Rock ‘n’ roll and drugs.”

Suddenly the realisation: she’s probably knackered because she hasn’t fully recovered from the broken neck she suffered in a fall from stage, and which kept her out of action for over a year.

We talk for about an hour or so, finalising arrangements for the coming day when I’m to get as close to the band as I can.

“I’d really like you to talk to Lenny,” she tells me. “He’s the one who’s most articulate about what the band are doing.” We make a vague arrangement to talk tomorrow.

But what most strikes me throughout the conversation is just how level-headed and sympathetic Patti Smith is. No crazy tangents or verbal diarrhoea. No babble-on. She’s tired but responsive nonetheless, talking about her music, where she’s taking it, what she feels lies within its scope, without either excess or obsessiveness.

Which isn’t to bullshit that she’s just another normal geezer. She isn’t and she knows it, to the extent that she sees herself as an artist, bringing her insights to the people and sharing the gift of her energy with them. She jokes about the latter.

“I was at the doctor yesterday and he says that I’m a great transformer of energy. But he thinks I should be doing something else with it. He says I should give up rock ‘n’ roll, that I should go into a convent. Rock ‘n’ roll is too rigorous. He says it takes too much out of me.”

But before the laughter that story induces takes over, there’s a flash of horror. It’s probably true for the most part. She looks, in that instant, as if he really did tell her she’d have to give up.

One thing for sure: he’s underestimating her guts, whatever about the current state of her health.

Still, there’s an overall feeling of tension in the air. Even while swapping humorous anecdotes, drummer Jay Dee Daugherty and Patti both complain about an inability to sleep at night.

A couple of hours before the gig is due to start, Lenny Kaye arrives back from the sound check and reports that everything’s okay. Patti decides finally to hit the sack. Lenny and I talk at length and then arrange that I’ll travel with him in the early shift to the gig...

I’ve come into this situation with ambivalent feelings about where Patti Smith is heading. Does she have the self-critical capacity to look at what she’s done and come away from it recognising its faults? I’m not sure.

It all arises from the fact that I decidedly did not get off on ‘Radio Ethiopia’ (the track, not the album as a whole) either on record or — more pertinently in tonight’s context — on stage. After the sublime heights scaled by the ground- breaking Horses — and even at this stage, the more I hear that album, the better I like it — 'Radio...' was a bringdown.

But it’s necessary to put that feeling in the context of an awareness that Patti Smith — or The Patti Smith Group — will not be tied down, will not conform to expectations or preconceived notions in the minds of critics, audiences, possibly even themselves.

If they stand specifically for anything, it’s the right — even the need — to follow your own heart, your own impulses. To improvise. To do the unexpected — because that’s how you find yourself in new places and reach new highs.

But either way Patti Smith is a great performer. Put her on stage and she comes alive like a crazed ballerina socking it to the night — caught in the spotlight she’s a bundle of energy igniting, sparking and sending blood-curdling bone- shaking noises out at the massed audience.

She sings, she grunts, she howls, she purrs, she gets down, she gets up — she moves out into the people in the auditorium (and it’s impossible to escape the connection), like a messiah.

She pushes herself, she gives her everything to extend the range of her art.The Patti Smith Group are nothing if not committed. Supportively, they drive one another up and up. And up.

Patti Smith has already taken one serious tumble for the cause. I wouldn’t be surprised to see her die — like any messiah — in the name of rock ‘n’ roll.

And yet I can’t escape the feeling that there’s an air of unreality — that word is inadequate but it seems to be the best available — about the whole thing when she grabs her fender ‘duo-sonic’ and plays like crazy — rhythm guitar, rhythm guitar and more rhythm guitar, coming together for a mock-phallic routine with Lenny Kaye before launching back into more rhythm guitar.

Fields of sound, they call it. At times it’s like broken glass. A bloody assault on your ears. Images of horror. Castration. Let yourself go with it, I think. But there’s nowhere to go.

Patti Smith’s ecstasy. But does ecstasy communicate itself in linear progressions? Because you’re having yours, will I have mine? It’s got to be hit and miss.

At this moment there are no categories. No criteria. Just the endless realms of subjectivity and relativity that refute critical certainty. Your experience and mine are totally different. Patti Smith plays you and you’re either in tune or not. Count me discordant again for ‘Radio Ethiopia’, though I’m closer to the heartbeat than before. Who knows when?

On the other hand, ‘Pumping’, ‘Ask The Angels’, ‘Ain’t It Strange’, ‘Rock ‘n’ Roll Nigger’, ‘Because The Night’ and ‘Gloria’ — ESPECIALLY ‘Gloria’ — are transcendent and magnificent.

They still make me wanna dance to a powerful — gut powerful — rock band.

In the end though, I am no more convinced. I am not even happy. Everywhere around me backstage, people spew congratulations, the usual backstage after-gig routine, in which I just can’t participate. I’d like to talk to Patti Smith, but by now we’d agreed that my eyes and ears would have to be my judge.

In a way it seems ludicrous to feel like this, when a singer and a group have just given so much energy, so much heart, so much guts to what they’re doing. Maybe I just needed to be closer to the stage. Maybe I’d have got the extra lift had I been more familiar with the songs from Easter, which compromised the bulk of the set.

And still I feel that Patti Smith is the single woman most capable of making a major impact on the course of rock ‘n’ roll during the next five years. She has the motivation as well as the ability, the intelligence as well as the heart... I could go on.

The question is whether or not she can fully realise the potential she’s got. There’s nothing I’d like to see more, at the moment, than her elevation to the pinnacle of achievement — and her desire to bring more rock ‘n’ roll to Ireland fulfilled. That'd be an experience to savour, potentially traumatic, even explosive but immensely rewarding.

My response is to return to the albums. To listen again to the seminal, wondrous Horses; to Radio Ethiopia; and to Easter. To immerse myself in Patti Smith’s work. Her talent deserves that kind of commitment, at the very least. From you too.

Jesus died for somebody’s sins but not hers. Happy Easter.