Live Report: We’ve Only Just Begun kicks off with Wyvern Lingo & more
Processed with VSCO with a6 preset
Copyright 2019. All rights reserved.
By: Brenna Ransden

The second annual We’ve Only Just Begun festival opened last night at Whelan’s in celebration of some of the best female lead acts in the country.

The We’ve Only Just Begun festival at Whelan’s kicked off last night with numerous brilliant homegrown acts. When looking at the lineup, there’s note in the fine print: “Notice anything different about the line-up?” it asks, followed by the hashtag #WHENYOUSEEIT. The festival, although not marketed as such, features all-female or female-led artists in celebration of the women who’ve persevered in a male-dominated field.

First up on the mainstage was Dublin native Gemma Dunleavy, who rocked the crowd with her unbelievable runs and charming bops. From the start, Dunleavy flaunted her colossal range with runs that spanned multiple octaves. Often, her voice was reminiscent of a fuller-bodied version of that of Ariana Grande… an Ariana Venti, so to say?

The darker melodies behind ‘Deep Breath’, her 2015 collab with Murlo, rocked the room and was the bop the crowd had been warming up for. She bopped and bounced to the rhythm and really let loose and the crowd followed suit. Dunleavy closed out her set with her latest single, ‘Better 4 U’ which laid off the synths to make room for her voice which boomed throughout Whelan’s. The sensual lyrics and power vocals left the crowd wanting more when she took her final bow.

Next up, Nnic (pretend the second ‘n’ isn’t there – it’s pronounced like Nick) strutted on stage in thigh-high black patent leather boots and an oversized blazer. Flanked by a bassist and a synth drummer, she immediately dove into ‘Grow’, a sultry electro-pop ballad where she proved she could jump octaves all day. Her comfort on stage grew more and more apparent as she settled in, at one point yelling to the crowd, “Let’s see some dance moves!” between verses in ‘8th Wonder’.

“This is the best day of my life!” screamed someone in the crowd as Nnic swayed to the beat. She closed out the set with her debut single, ‘Pillars’, an anthem dedicated to women supporting women; the perfect message for We’ve Only Just Begun. 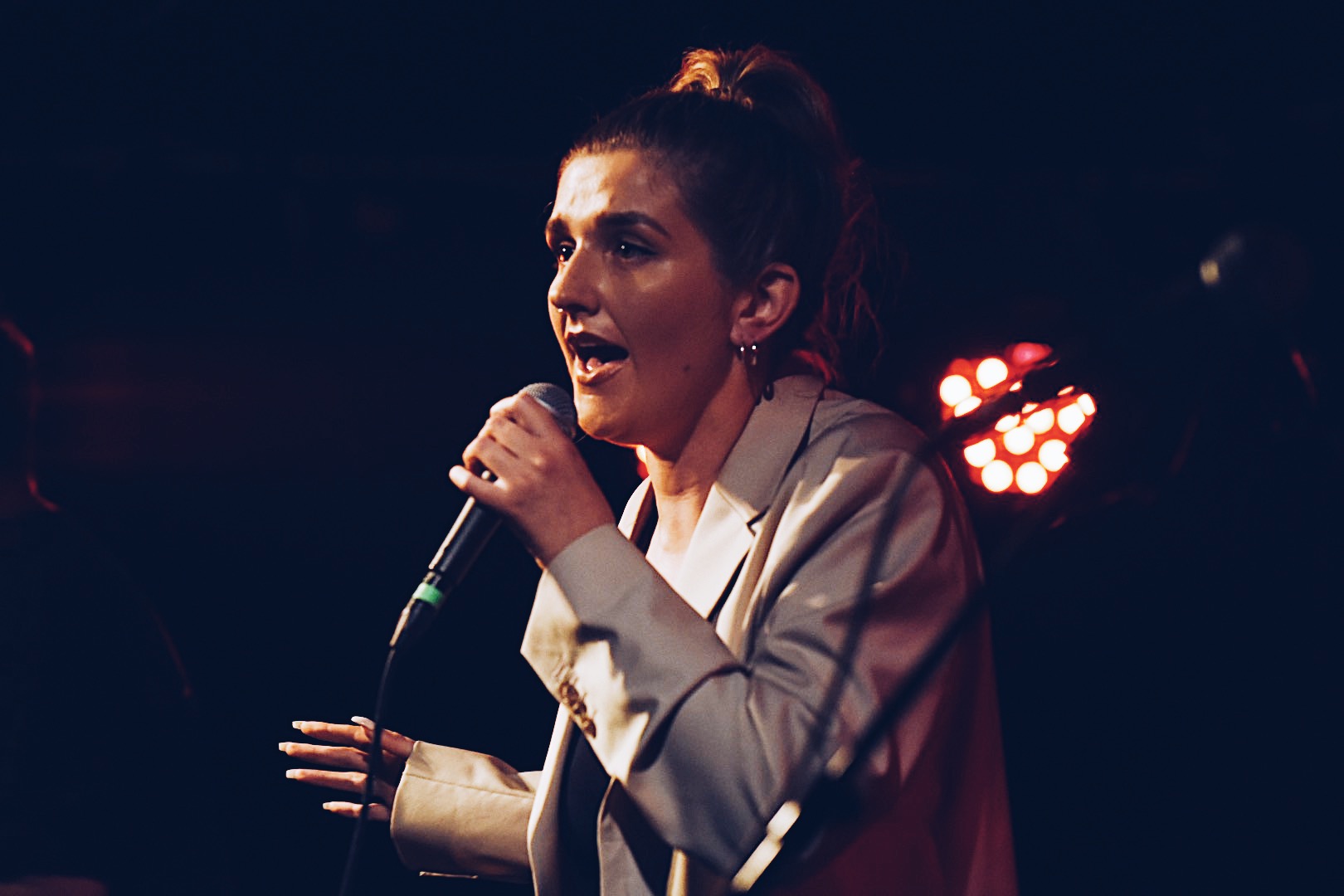 Not only did ELKAE (Laura Keane) literally fill the stage – she had backup vocals, a drummer, a bassist, a guitarist, and someone on the synths – but her electro soul sound echoed throughout the entire room at Whelan’s. Her stage presence was infectious from the moment she walked out on stage and asked the crowd how they were doing to when she took off her jacket and came out from behind the keys to really dance halfway through the set.

The highlight of the set was undoubtedly near the end when Keane sang ‘Girls Like You Like Me’ and levelled up the energy in the room to new levels. The drum line and guitar solo rounded out Keane’s vocals for a stellar performance. Unfortunately, ELKAE’s performance had to end at some point, but she went out with a bang with her hit song ‘Sold’ which brought out the funkier side of her music.

Finally, rising Irish stars Wyvern Lingo pulled out all the stops for the final set. All donning different shades of violet, the Bray natives emitted cool girl vibes to the max. The band dominated the room as each member switched from instrument to instrument. These girls truly are talented.

Each song was particularly phonaesthetically pleasing, but the syncopated chorus and edgy vocals of ‘Subside’ stood out as an emblem of Wyvern Lingo’s uncategorizable sound. Each part of the song, from the keys to the guitar to the vocals, meshed together in a cacophonic symphony. The girls showed no signs of the nerves they claimed to have when they performed a yet-to-be-released single. The emotions were palpable, however, in their moving performance of ‘Maybe Its in My Nature’ which features three-part harmonies and a blasting chorus. Wyvern Lingo closed out the first night of We’ve Only Just Begun with a brilliant set that celebrated a full night of female talent.

We’ve Only Just Begun will continue the whole weekend at Whelan’s in Dublin 2. Tickets for Saturday and Sunday are available here.

Jack Charlton has passed away aged 85
Jeorge II to play the Hot Press Lockdown Sessions' Y&E Series tonight
Somebody’s Child Releases Ambitious New Single, ‘We Could Start a War’
Brian Houston releases new single 'Ivory Tower'
PREMIERE: James Cramer – 'My Darkest Hour'
LISTEN: Pat Lagoon teams up with Project for new single 'Prada'
We use cookies to ensure you get the best experience on our web site - by using this web site you consent to our use of cookies. Read more »