Live Report: Patti Smith at All Together Now 2019
Pat Carty

Coming In In All Directions…

Poetry is too often the refuge of the charlatan. How many trees have needlessly died so questionable academics could self-publish their self-important and artistically dodgy couplets to secure another few years behind the desk? How many teenaged declarations of different have been scrawled across foolscap. I know I did it. So did you. When it comes to poetry you had better be brilliant or you had better keep it to yourself. If you saw the recent Scorsese documentary Rolling Thunder Revue: A Bob Dylan Story, you know that Patti Smith had it, had that brilliance, even before the seismic shock of Horses, talking down a crowded club with the archer and the princess. They say Dylan brought poetry into rock n’ roll, although he used to tell you, quite correctly, that Smokey Robinson was America’s greatest living poet. Patti Smith picked up the baton he handed her and ran with it. Patti Smith is a poet. Patti Smith is rock n’ roll.

Patti Smith is worth waiting for. The longer the wait went on, the more uncomfortable it became as more and more eager faces tried to squeeze into the confines of the All Curious Minds – Here tent. By the time security are clearing a path to the stage – and some ardent admirers, anxious to pass messages to the poet, are extremely loath to move – it’s crammed beyond capacity, but that’s probably less than 200 people so it feels special before it even begins. Smith walks by my perch, and even a tired, old, worn-out and hungover hack has a “my God, that’s her!” moment. Smith wanted “a small gathering for our living memory of John Reynolds. This festival was his great dream. John, the last time I saw you, I said I’d be back, and here I am.” She’s got us before she’s even started.

Two acoustic guitars – Smith on one, her close friend and collaborator Tony Shanahan on the other – open with ‘Beneath The Southern Cross’ from 1996’s Gone Again. “Oh, to be not anyone. Gone this maze of being skin.” Those gathered are agape. At the song’s end, “Cross over, John. Cross over, friend.” It is a tribute befitting the man and his work.

How do you follow that? Sam Shepard, another departed friend, had a Samuel Beckett poem hanging on his kitchen wall, this is the first time Smith has read it to an audience. ‘What Is The Word’ is Beckett’s last poem, written at 83, a meditation on expressing the inexpressible. Smith smiles at the power of Beckett’s word about words as she finishes. Where then? William Blake couldn’t give his poems away but he maintained his vision. The lesson, Smith reckons, is not to worry about being appreciated, only worry about doing good work. ‘My Blakean Year’ from Trampin’, “fortune breathed into my ear, mouthed a simple ode”. The poet’s dream. More Beckett. Smith treads softly though Yeats’ Aedh Wishes For The Cloths Of Heaven. She surprises us with U2’s ‘Love Is All We Have Left’, Shanahan’s keyboard turning to song to a lullaby, a hymn to life, “this is no time not to be alive.” She’s delighted to “steal the song and sing it in its own country”. The young punks that still live somewhere deep in Bono and The Edge would be dancing a jig. Another poem that she’s nervous to read out loud, Yeat’s apocalyptic rumination on a post World War I world, The Second Coming, the lines “the best lack all conviction, while the worst are full of passionate intensity” sadly perhaps even more relevant today. “The sound of a thunder, it roared out a warning. A highway of diamonds with nobody on it.” We’re back with the rock n’ roll poet, Dylan’s ‘A Hard Rain’s A-Gonna Fall’, Dylan the rock n’ roller who has the medal that says he’s fit to stand beside our own Nobel recipients. The poetry of rock n’ roll, our greatest art form. Smith believes it. Smith is it.

The crowd is parted again to let her go, acolytes approach the buggy that’s trying to take her away, anxious to touch the hem, trying to hold onto an experience that’ll be long talked about. We were there.

The Power To Dream

Smith’s main stage (very) electric set opens with ‘Wing’ from Gone Again. The drums are brushed and the electric guitar is gently strummed, “I was free, I needed nobody, it was beautiful.” In a way, Smith is easing us in, standing there before a crowd that will swell to a huge number in black blazer and waistcoat over a white shirt, so imbued with “it” that she even manages to make a black beanie hat look iconic. Scotsman Seb Rochford kicks the drums into gear for a take on Hendrix’s ‘Are You Experienced?’ Smith calling for “new words, new ideas” before her guitarist son Jackson Smith quotes ‘Third Stone From The Sun’ to finish. Rochford picks up orchestral mallets and Shanahan moves from bass to acoustic guitar for ‘Ghost Dance’. Here is where the air starts to change, and the feeling spreads through the crowd, silencing talkers as it begins to dawn on them that something exceptional is taking place. Smith is casting shamanistic spells with her hand movements “we shall live again, shake out the ghost dance” and Rochford offers an appropriate American Indian beat. 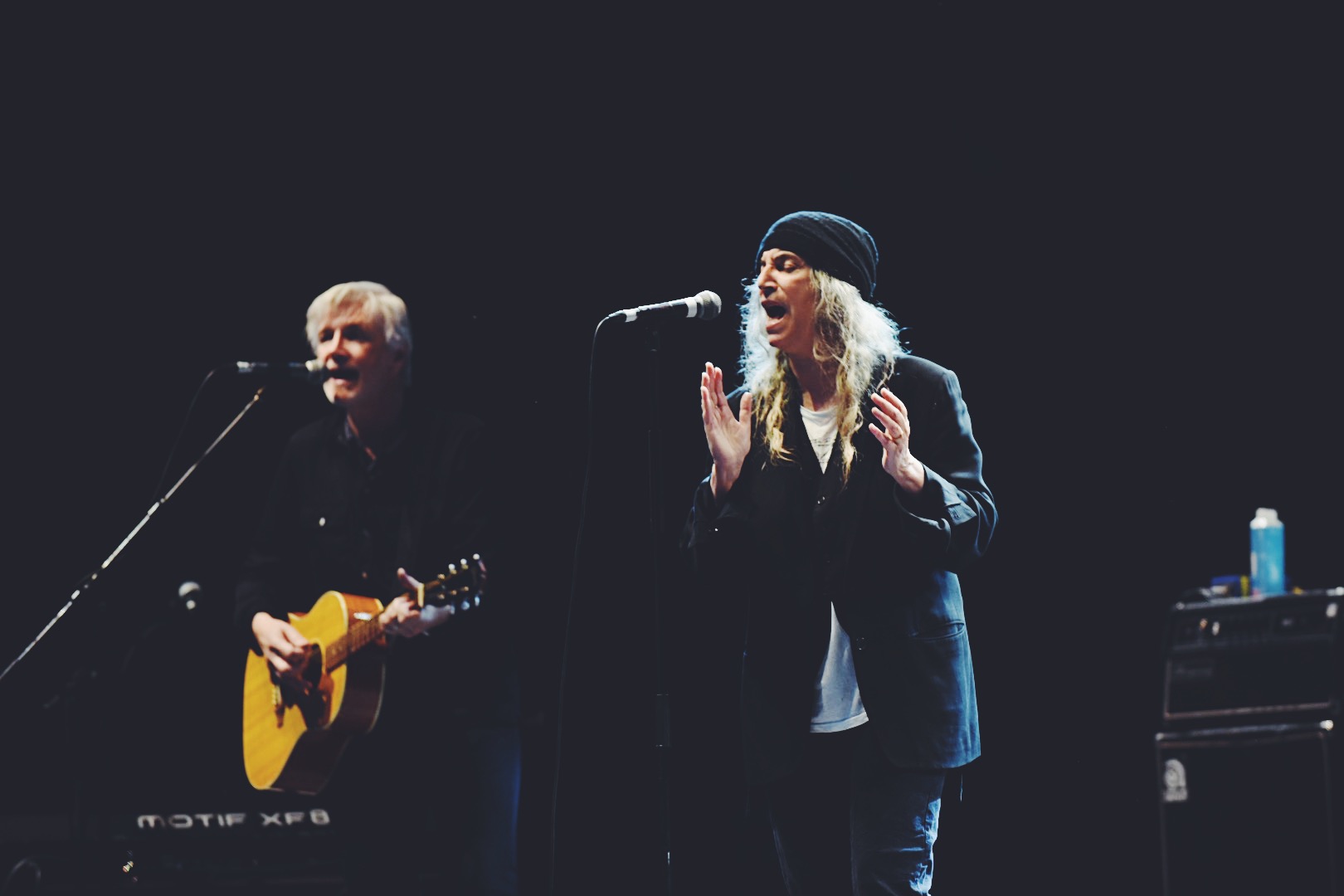 Patti Smith at All Together Now, Copyright Miguel Ruiz/Hot Press

“Turn great circle and go down deep into the Earth to the Gods of dreamtime.” Smith’s poetical flight of an intro sounds like it’s being backed by The Doors, but it turns out she’s ramping up into Midnight Oil’s ‘Beds Are Burning’. She can take a song like this, perhaps not the greatest song ever written, and change it to something vital. The slow chords open ‘Dancing Barefoot’, a song driven by her son’s exceptional playing, combining lead and rhythm so the join disappears. She mentions again “our dear friend John Reynolds. I promised him we would return” We’re back to the start with ‘Beneath The Southern Cross’, Rochford doing his best Moe Tucker, and Lou Reed smiling somewhere at the almost constant D chord, broken by Shanahan and Smith (Jr) quoting The Beatles’ ‘Within You Without You’. Smith’s passion is rising, she’s howling now, her arms raised in a V, demanding we “Raise our arms! Feel Your creative voice! Feel your fucking freedom! FEEL YOUR FUCKING BLOOD!” Those in the crowd who may have been crossing off the “I saw a rock legend” list are getting far more than they bargained for. The air above us crackles with the electricity this woman, this poet, this force of nature is generating.

She needs a minute. Shanahan leads the band through The Stones’ ‘I’m Free’ into Lou Reed’s ‘Walk On The Wild Side’ and Smith makes it back to the stage for the “do,de,do,de,do” bit, taking it back to the Stones’ declaration to finish. Shanahan sits at the keyboard for another cover, Neil Young’s ‘After The Goldrush’, the “mother nature on the run” eco-message a precursor to the earlier one from Midnight Oil. It’s beautifully sung, her voice of sand and glue crackling in all the right places.

“I know you had to endure trials and traffic and rain. Part of it is the fucking journey. It’s about us being here together!” The crowd roar approval although had someone delivered the same speech the night before the response might have been very different. Smith has built on the better vibe that suffuses this festival on its second day. Despite the rain people are smiling, the gloom has lifted. ‘Pissing In The River’ has a false start – “uhh, take two!”  - but it builds from its gentle beginnings to an intensity that you can’t turn away from. “What more can I give you? Baby, I don’t know.” But she has more to give, the show has now become the kind of thing you hope you’ll find at every festival, a communal experience where everyone present knows they’re seeing something, they’re feeling something rare.

“This song was written for Jackson’s father, Fred ‘Sonic’ Smith” That familiar pattern heralds ‘Because The Night’ and the song becomes a sing-along that has Smith grinning throughout because this night belongs to us. As intense as the show has been so far, nothing really prepared us for the power of what came next. Those rolling piano chords and Smith almost mutters “Jesus died for somebody’s sins, but not mine.” Half the crowd are howling, the other half are speechless. “I… walk in a ro-amm and I just get bored” the music starts to build and whirl around in the air, faster and faster, “knocking on my door!” the piano answers. Smith half removes her jacket, then tears it off and casts it behind her. “Ding, Dong, Ding, Dong, DING, DONG! G-L-O-R-I-A!” the crowd explodes, roaring the deafening response. We are in it now, a rock n’ roll maelstrom. Smith gets caught in the wires and throws the mic to the stage. “I got tangled up in my own shit!” She even makes poetry out of this. The song threatens to pull itself apart, Smith is dancing with the crowd, again and again we howl out the refrain until finally it stops “Jesus died.. for somebody’s sins…” she holds the moment and holds it and then at, last “but not mine” A final melee with the chorus and it’s done. The crowd are wild, howling, baying. This is fucking rock n’ roll. Forget the traffic, forget the rain, forget everything. This is what is, this is what makes it. This is what we are all after.