"For what died the sons of Róisín, was it greed?"

The use of this Luke Kelly quote as the backdrop to Fontaines DC's explosively rock n' roll performance on the opening night of All Together Now's second year had a few people in the huge crowd grumbling. It has to be said, for an awful lot of those here, the first day was marred by some disastrous traffic. Let's step around that and talk about the good stuff.

Fontaines DC are having the kind of year that all bands dream of after that first trash in the garage: a hit album, late night American TV spots, fêted in the New York Times. The thing is they've worked for it, and worked hard. The album, Dogrel, might not be to everyone's taste, if certain corners of the media are anything to go by, but there's no arguing with the live show.

'Hurricane Laughter' comes on like an out of control 18 wheeler, Grian Chatten prowling the stage like the fella you said you'd pay last week and now you're asking for an extra few days and he's not happy. Everyone knows a band is only as good as its drummer, and Tom Coll is very good indeed. He beats the drums like they ran over his dog. Conor Curley just looks ridiculously cool, sun-glasses-in-the dark cool. This is the picture you would find were you to look up "guitar player" in an indie rock encyclopedia. His intro to 'Chequeless Reckless' is very fucking exciting.

Grian gives the fingers to someone in the crowd before 'Sha, Sha, Sha', dedicates 'The Lotts' to his Ma, and sends 'Television Screen' to the mired-in-controversy Versatile. Which way was it meant? Who can tell? He spits, he takes out a smoke, "does anyone have a light?", Carlos O'Connell attacks the guitar with a bottle, Conor Deegan leans his head into the bass amp. Is it 'Too Real' for ya? The frenzied crowd let them know it's exactly real enough. The band gather around a bottle of Jameson and a packet of smokes before a great 'Liberty Belle', but 'Boys In The Better Land' goes up another few degrees. Coll's floor tom seems plugged into something elemental deep in the earth, tambourines and guitars rattle, Deegan kisses Chatten who stretches out his vowels like a certain Mr J. Rotten. It's undeniable rock n' roll.

'Dublin City Sky' has the punters down off each other's shoulders and embracing, howling along like patrons in a particularly salubrious late-night snug. They finish with 'Big', which they are, in every sense of the word. 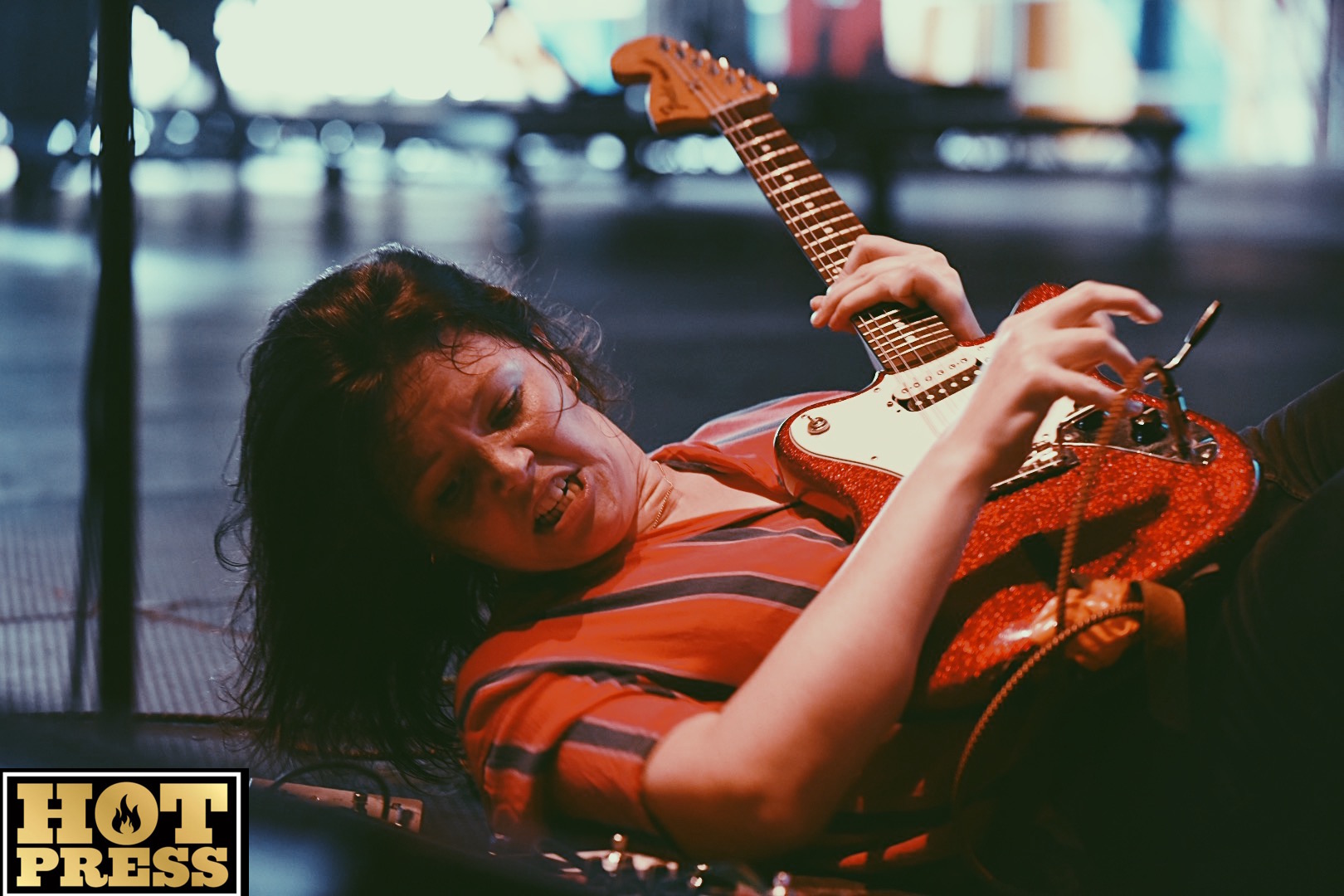 Bitch Falcon at All Together Now 2019. Copyright by Miguel Ruiz/Hot Press

Bitch Falcon give a good and loud account of themselves early in the day, the kind of sonic battering you need to get things going. Neneh Cherry's solo set was beyond packed out in the Something Kind Of Wonderful tent but perhaps even better again was her DJ set at the Belonging Bandstand. She spun everything from Gwen McCrae's 'All This Love That I'm Giving' to Tyler, The Creator's 'I THINK'. Everybody's dancing, everybody's grinning, job done. 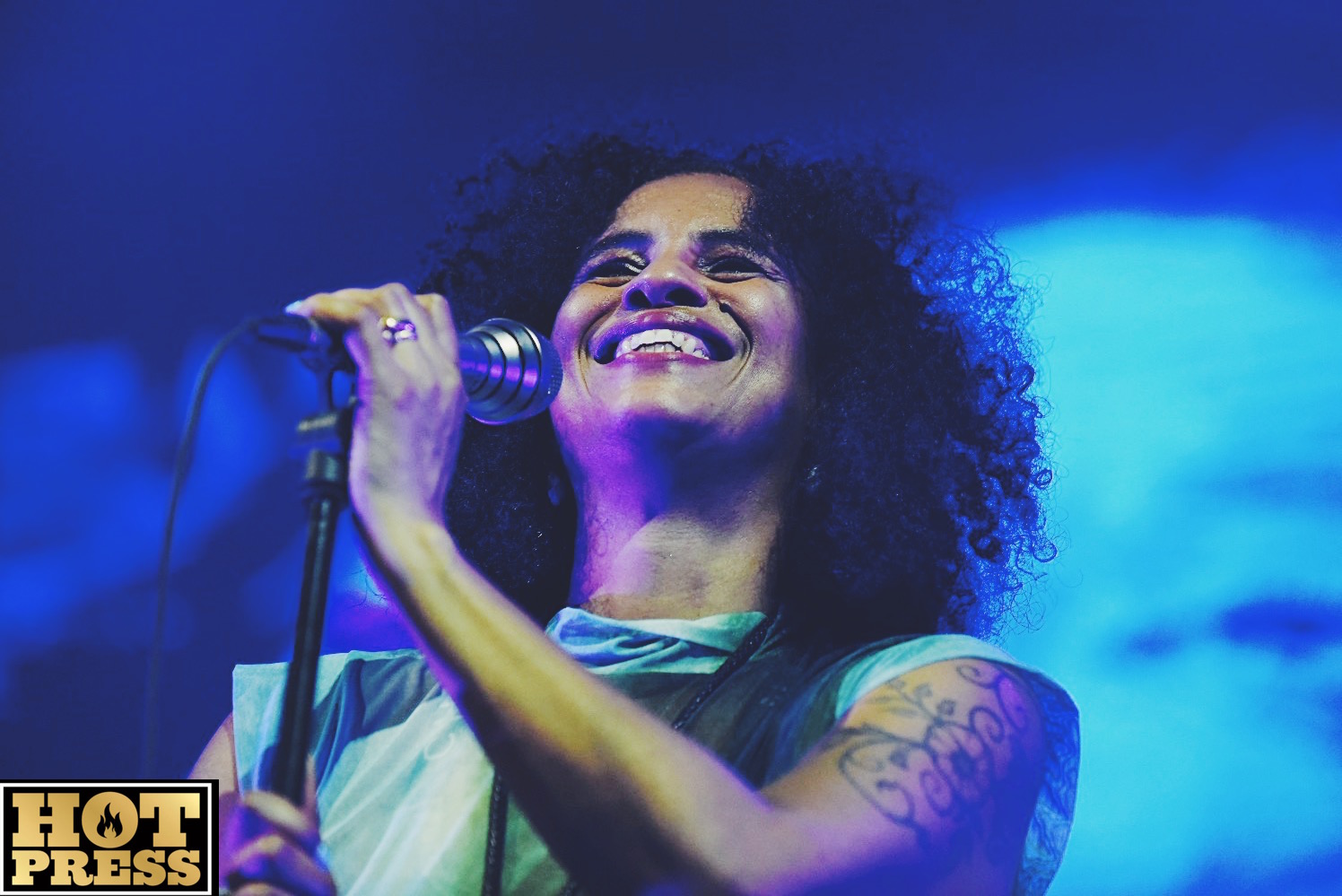 None Cherry at All Together Now 2019. Copyright by Miguel Ruiz/Hot Press

New Irish Songs To Hear This Week
KNEECAP: "The only thing to do is take the piss – because if you don’t laugh, you’d be crying your eyes out"
Student Special: Go Your Own Way – "Keep your options open. Not every decision is final"
Album Review: Alex G, God Save The Animals
Student Special - College Life: "While there are no clear answers, the journey itself is what is most important"
New Irish Songs To Hear This Week