It was a gorgeous summer's evening in Dublin last night – and what better way to celebrate it than joining the Hot Press team at Live @ Aloft, featuring the brilliant, rising Irish rap star, Malaki?

It’s no exaggeration to say that Malaki burst onto the Dublin music scene as if from nowhere.

Back in 2019, he exploded with a stream of genre-blurring, addictive singles. Add the fact that he demonstrated a wonderfully open, forthright disposition, and it quickly became clear that Malaki (aka Hugh Mulligan) was exactly the prophetic rapper-songwriter-poet we needed.

And so it has proven ever since. The Dublin performer navigated his way around Ireland this summer, making appearances at an impressive range of festivals – Body & Soul, Forbidden Fruit, Sea Sessions and All Together Now among them. But he’s never performed in a hotel before – which brings me to last night.

Soaking up the remnants of a golden summer on the Aloft rooftop, in the historic Liberties area, yesterday evening was memorable, to put it mildly. There’s a great 360°-style view across the city to be savoured, and they had special Malaki cocktails, presented in ‘beat box mugs’ to enjoy. 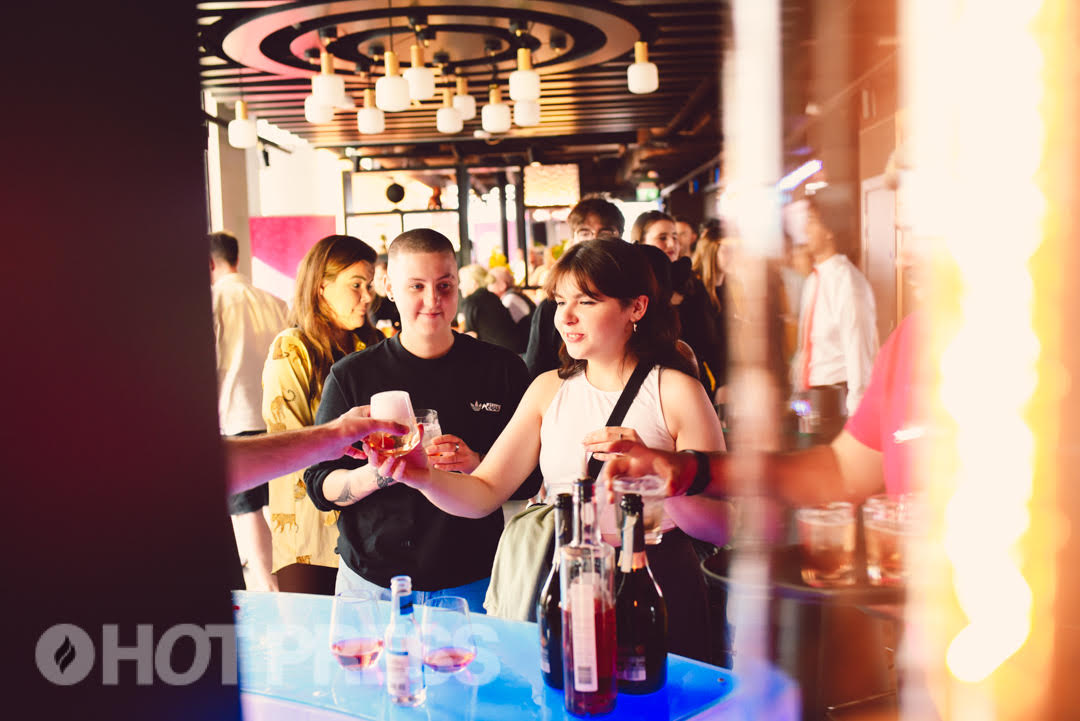 No wonder flocks of friends climbed the elevator to the top floor, swarming through the pink-lit bar, grabbing those crafty cocktails, playing rounds of pool and eagerly awaiting the arrival of Malaki, as the newest guest in the [email protected] series, run by Hot Press. 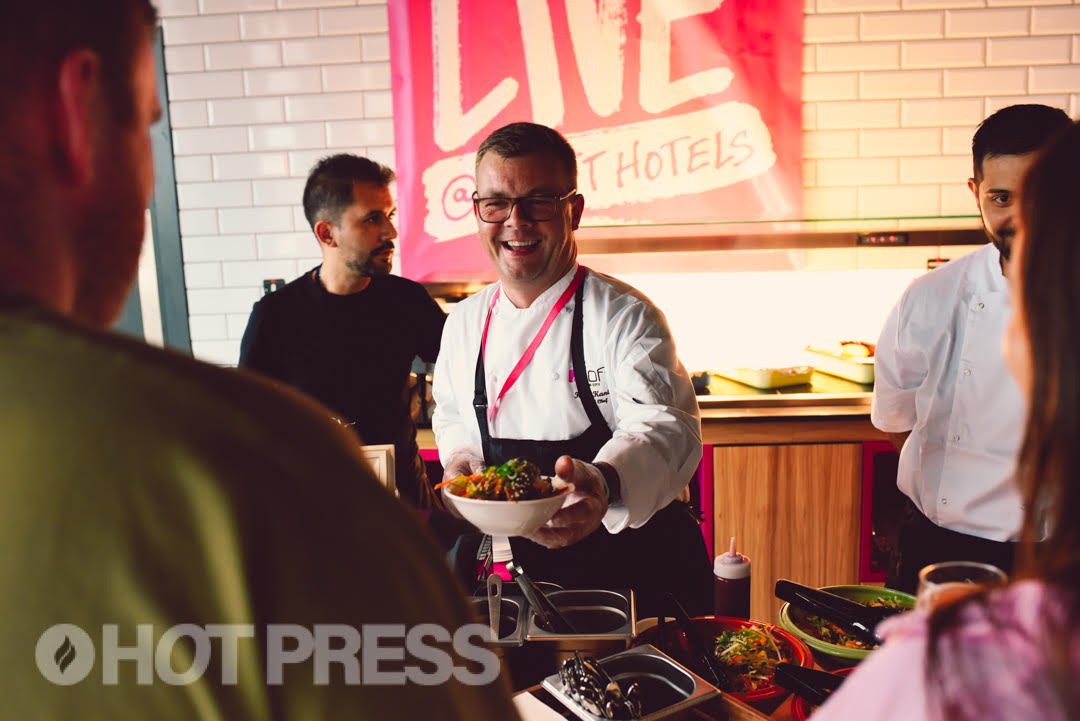 Casually clad in fishnet and khakis, Malaki descended on the Aloft stage as his band unleashed the spiralling intro of ‘Scumbag’. The genre-blurring force of Malaki’s sound hit the crowd from every direction, the guitar evoking a psychedelic quality, while the persistent drumbeat entranced the room into grooving. The vocals, meanwhile, were delivered by Malaki with urgent passion. 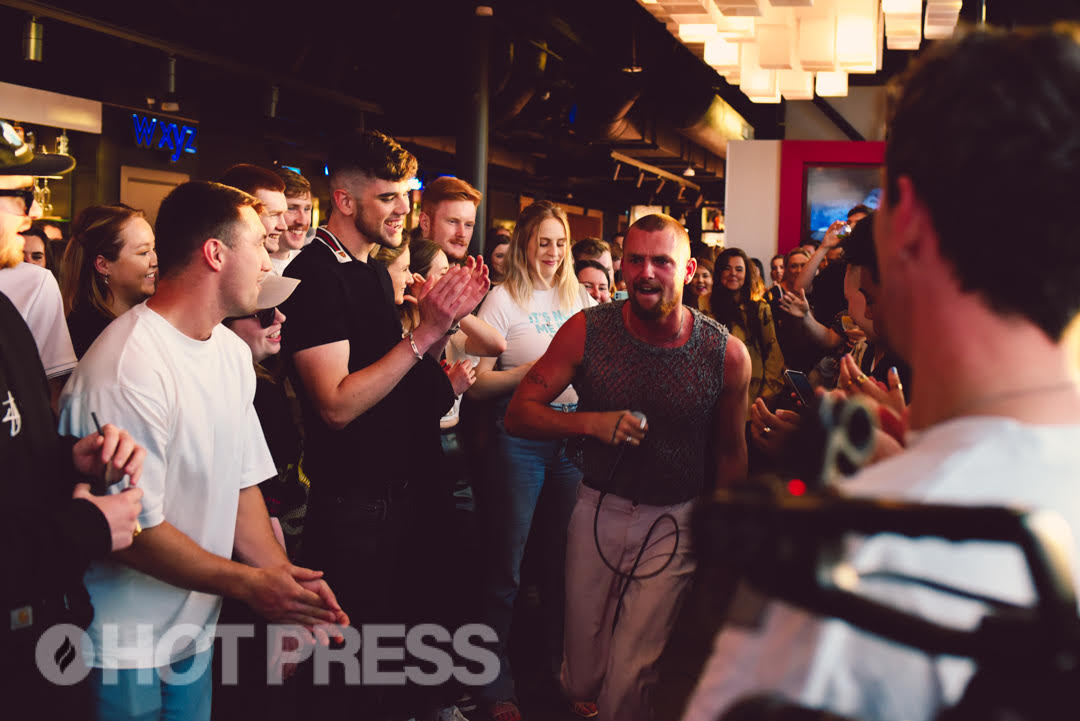 Live and up-close, Malaki’s stage presence is phenomenal, lifting the artist’s entire operation to an otherworldly stratum. He engaged in a riotous, collective party with the crowd, who willingly shouted the choruses right back to him. The rapper was in non-stop motion, twisting across the stage like a pre-meditated tornado.

Commanding the crowd to get louder, he added, “No, like I want to wake up the people asleep upstairs!” He was as unashamedly loud as the words he sang-spat. 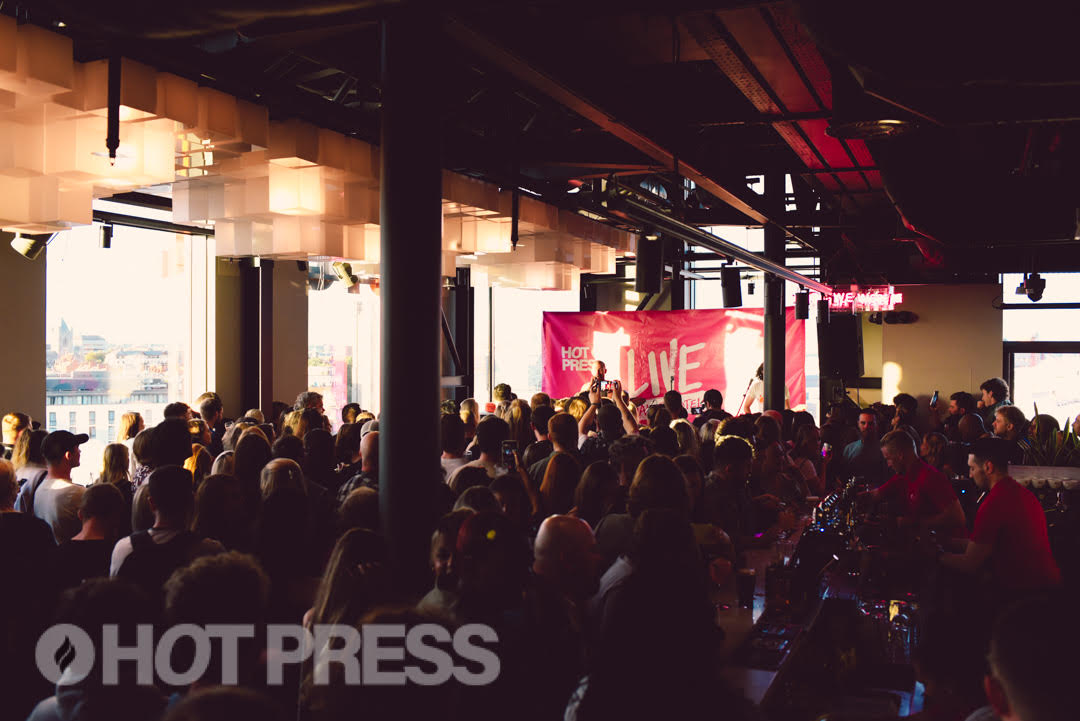 He then took a step down, tapping into a more hushed vocal tone for the beginning of ‘46a'. The tranquillity proved temporary as his wrath spilled over on the fervently delivered bridge, while the audience finished every last line of the hook.

The poetic rapper has been unafraid to shed a spotlight on male mental health, toxic masculinity, and the homelessness which is rampant in Dublin city, to name a few key topics. He also reflected on the many ways the country continues to fail its youth – expressing how it feels to climb out of a hole you don’t remember digging. But he also owned up to his own faults just as candidly.

The 22-year-old narrated his own personal struggles with sobriety and escapism in the spoken-word style ‘Paper Prophecies.’ A single piano key rang out before it was immersed in a sea of enveloping synths. From the middle of the stage, Malaki fluently drove his message home with each stacked line.

Utilising his voice to express his feelings seems like second nature to Malaki, who rarely appears breathless – just elated. As his lyrics gave way to the instrumental breakdown near the end of the track, he released his pent-up fury to the sound of a screaming electric guitar and heavy drumming.

Malaki joined the audience, getting on their level for a hushed rendition of ‘Call Us By Our Names,’ and the room fell silent. As he finished the track, hammering in the line, “Till I turn that page,” an unfamiliar guitar riff, ripe with indie rock energy, cut in. 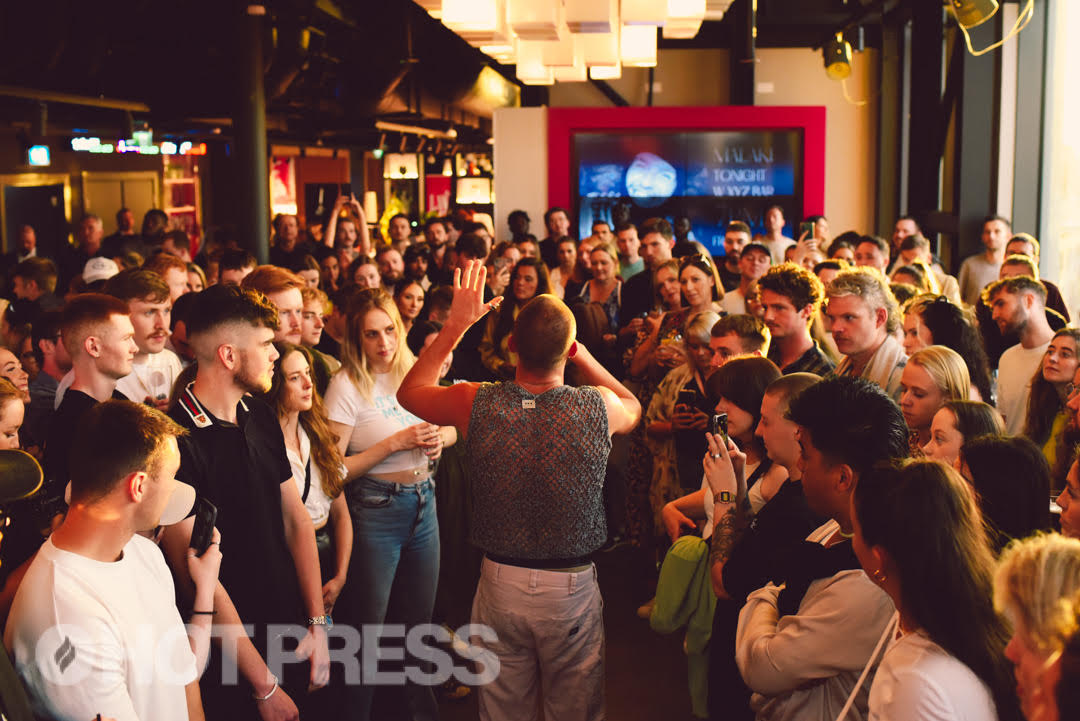 People were bouncing up and down and shouting along to the chorus – they seemed to know this amped-up track by heart. It was only afterwards, as the rapper asked, “So, should I put that one out? Soon?” and was answered by a collage of unanimous yes’s that I realised the song was as yet unreleased.

Hearts still on high alert, Malaki offered everyone a breather with ‘Fair Play,’ which he decked as, “one about drinking too much.” Lucy McWilliams wasn’t on the premises to sing the chorus – still nothing felt missing from the performance. The sunlight seeped in through open windows, soaking the room in warmth and pulling us into the atmosphere created by his sultry vocals.

“This will be my last song,” he announced, before expressing his sincere appreciation for everyone in the room. He ended the evening with ‘Cuppa Tea', a fitting cherry on top of a joyous Dublin night. It was a sprightly finale-for-the-books, as Malaki jumped headlong into the audience for a final embrace. As the outro drumbeat crashed around him, he stood breathless, and radiantly larger-than-life.

Malaki has a penchant for alter-egos, especially on ‘The Ripper’ and his darker tracks. But during his intimate Aloft performance, Dublin’s rising rapper was entirely himself – self-possessed enough to speak his mind on difficult subjects, candid enough to own up to his own past faults and possessed of an electric energy that fuelled what was an inspiring performance.

Most people forget past versions of themselves – Hugh Mulligan has made something extraordinary out of his. Last night, drenched in the setting sunlight of a fading Dublin summer, Malaki's future looked brighter than ever.

For more information on Aloft Dublin, visit their website.

Live Report: Malaki delivers phenomenal Academy Dublin performance
'When people listen to this EP, they're going to wonder if I’m okay - and I think it’s important to note that I am': Malaki on Don't Forget To Take Your Medicine
WATCH: Malaki portrays his manic alter-ego in new visuals for ‘The Riddler’