Dan Deacon is nothing if not an entertainer – and he makes the audience a hugely important part of the show. No wonder the crowd went mental at The Grand Social in Dublin last night...

Split the room down the middle. One half, dance like Tweety Bird. The other, dance as if Tweety Bird is controlling your movements from inside your abdomen.

Standing in front of a small table covered in wires and equipment, Dan Deacon gave these instructions to a sold-out crowd at the Grand Social as he began a performance of ‘Change Your Life (You Can Do It)'. Fully prepared to shed all inhibitions, the crowd flapped their arms and contorted their bodies. As per Deacon’s commands, individuals would take turns dancing in the middle of the room. His rules were simple – be as sassy as possible, and you cannot refuse if someone picks you to take their spot in the middle. 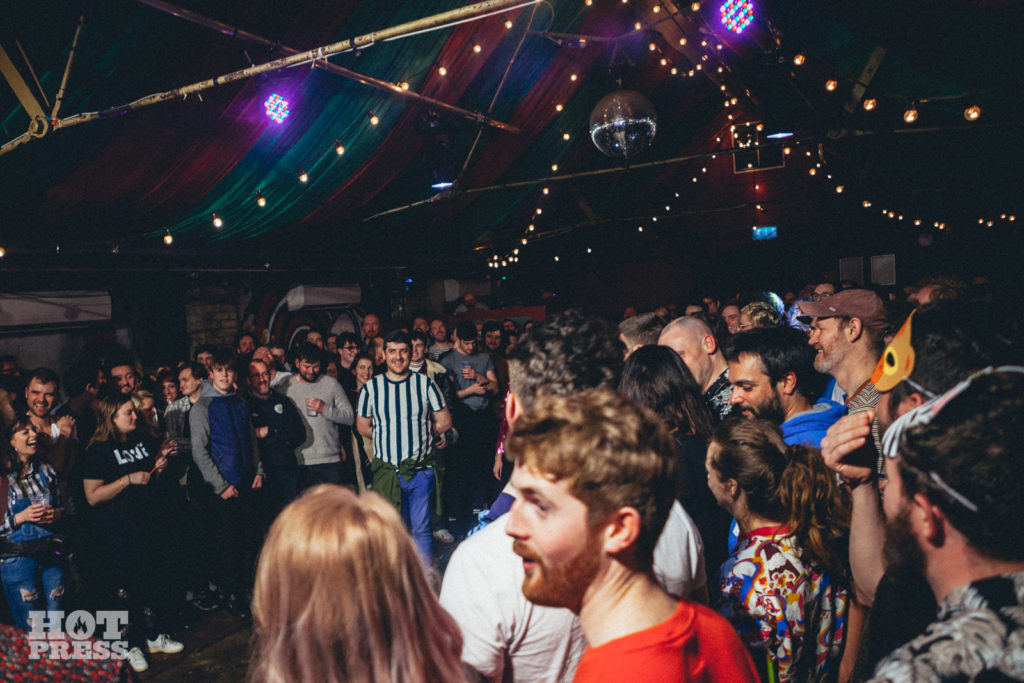 At every Dan Deacon gig, the crowd is as important to the performance as the performer (well, nearly). His trademark is turning up the house lights and turning the spotlight to the floor instead of the stage. Even without his (oddly specific) instructions, fans danced the night away in animal masks to chaotic synth tracks and strobe lights. No one seemed to care what they looked like, just moving their bodies however felt right in the moment. Everyone had a huge smile on their faces that they just couldn’t wipe off.

The Baltimore-based experimental synth pop producer had just released his latest album Mystic Familiar that morning and was incredibly excited to share his new project with the world – even if he did admit he hadn’t fully emotionally or physically prepared for it. Despite the very short turnaround time between the album release and the gig, passionate fans still sang and danced along to the brand-new tracks. A new highlight was ‘Sat By a Tree,’ during which fans led mass interpretive dances.

The gig reached its end with a wholesome 'Wall of Life', where the crowd was once again split in two and ran toward each other to give high fives. By the time he was done, Deacon had made sure that The Grand Social was covered in glow stick liquid, sweat – and an overwhelming sense of chaos. I exited with one takeaway – a Dan Deacon gig should be on everyone’s bucket list.