Enduring its appeal over the decades since its release, Alanis Morissette created a night of nostalgic celebration for her legendary album to an overwhelming Dublin audience.

If not for an introductory video montage recapping the history of Jagged Little Pill’s mark on the world, it would have seemed impossible that 27 years have passed since Alanis Morissette’s third studio album was released.

“Released” is a tame term – JPL was a sonic bomb. Drenched in then-21-year-old Morissette’s jilted rage and yet synchronously sanguine, the 1995 record detonated the bridge between antagonising grunge rock and pop radio play. Selling over 32 million copies worldwide, Jagged Little Pill remains the second best-selling album from a female artist in music history and a fixed symbol in pop culture.

If Alanis Morissette, now 48 and a mother to three, is still the emblem for the Young Angry Woman she embodied in the ‘90s, that’s an era-defining epithet the Canadian singer-songwriter celebrates. She made that fact clear last night at Dublin’s 3Arena from the moment she swaggered onstage, exuding the exigence of a troop leader in command. 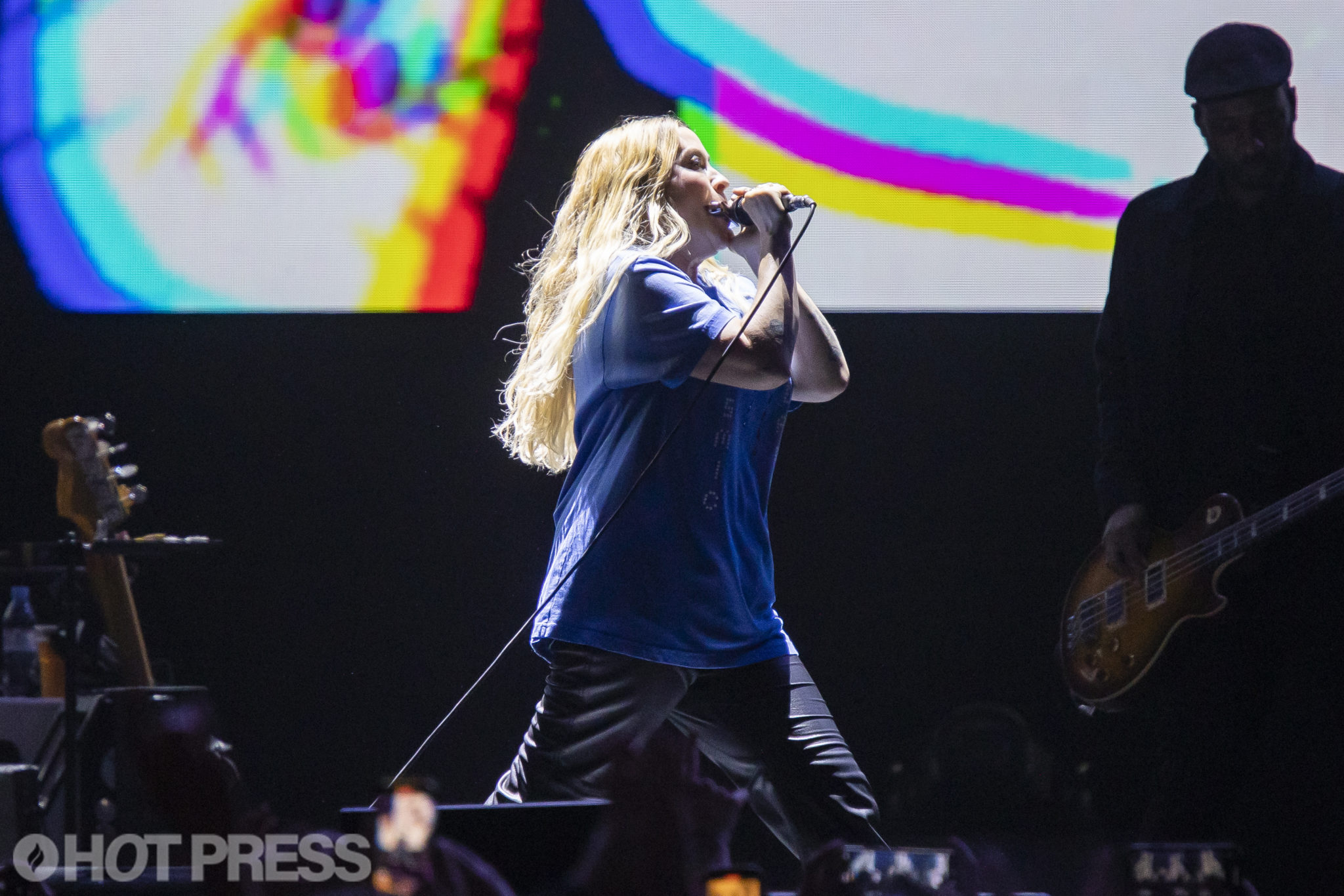 Her soldiers were the sea of standing heads on the spacious ground floor of the arena, surrounded by two tiers of what looked to be every living soul in Dublin. Each lyric and line ingrained in the crowd’s memory, a moment of silence throughout Morissette’s 90 minute set was hard to come by.

Clad in leather pants and electric blue, she slugged across stage to the arresting opening tune of ‘All I Really Want,’ pulling out a harmonica in the face of her guitar player for the bridge melody. The track still works its magic, falling right into place with prime psychedelic guitar hooks that pull you right into her world. She echoed the first of many “thank you, Dublin!”s before merging headfirst into ‘Hand In My Pocket.’

With its characteristic dose of Morissette-style irony, her audience was drunk on happy nostalgia. Guitarists Julian Coryell and Jason Orme drove the track forward with an understated rhythm, leaving more than enough room for the singer’s steadfast charisma to shine. 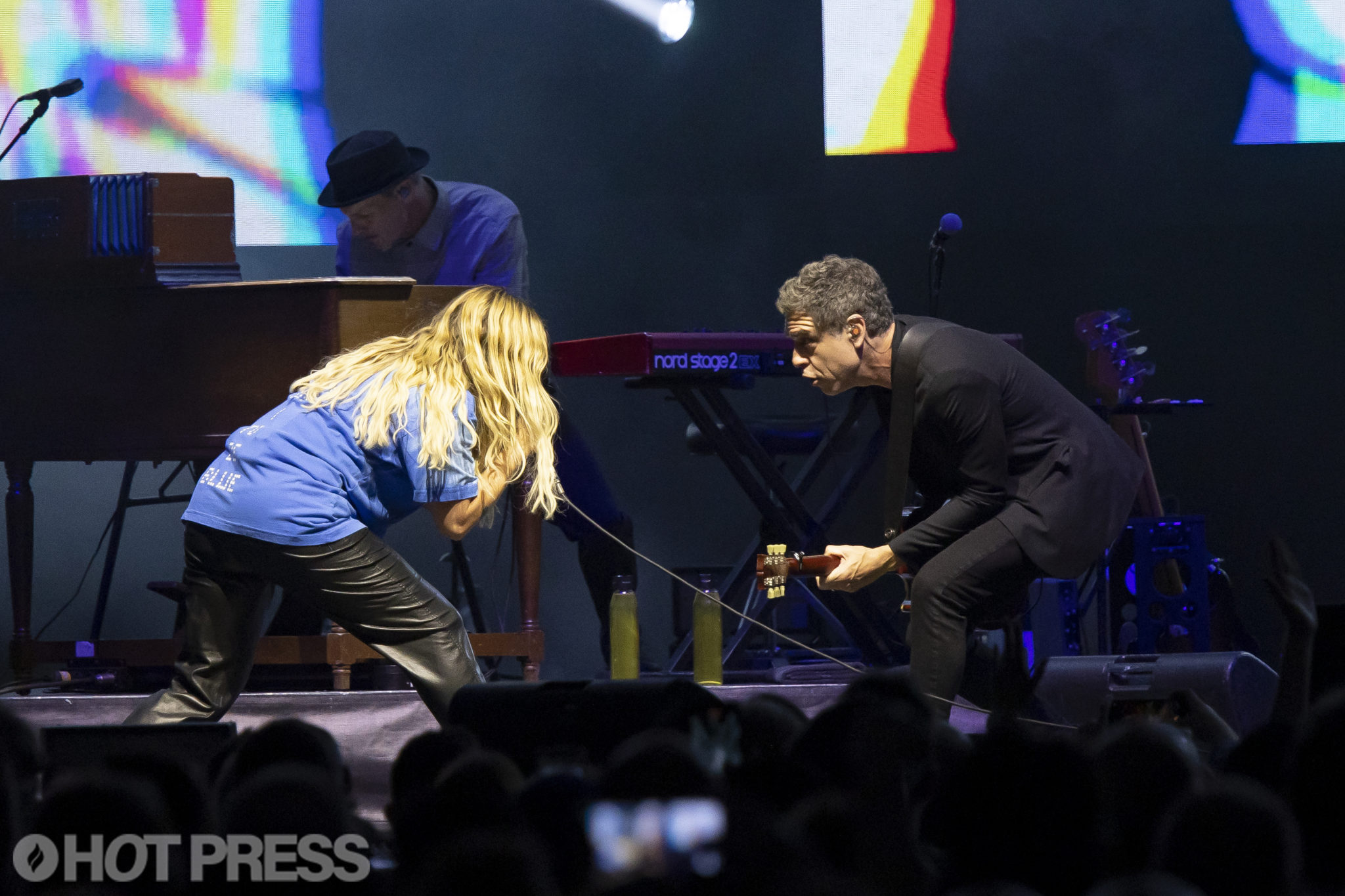 Alanis and her army love to stick it to the man. Nothing proved that to be true more than the volume of the arena as they chanted along to ‘Right Through You.’ “You didn’t think I’d show up with my army,” she sang. Thrashing about wildly, she took flight, punctuating, “and this ammunition on my back.”

Hidden in the rage and rubble of JPL is the hopeful chorus of ‘You Learn,’ which hit hard for an audience that undoubtedly has, since the album’s emergence, learned a few life lessons. Back to back for the chorus, Coryell and Orme summoned an otherworldly descending chord sequence.

When Morissette belts the refrain on ‘Forgiven,’ she whips away from the mic – a courtesy from a singer whose vocal aptitude has the potential to shatter glass. And she nearly did, hitting the high end of her overwhelming range on ‘Mary Jane,’ her tone red-raw against Michael Farrell’s haunting keys. 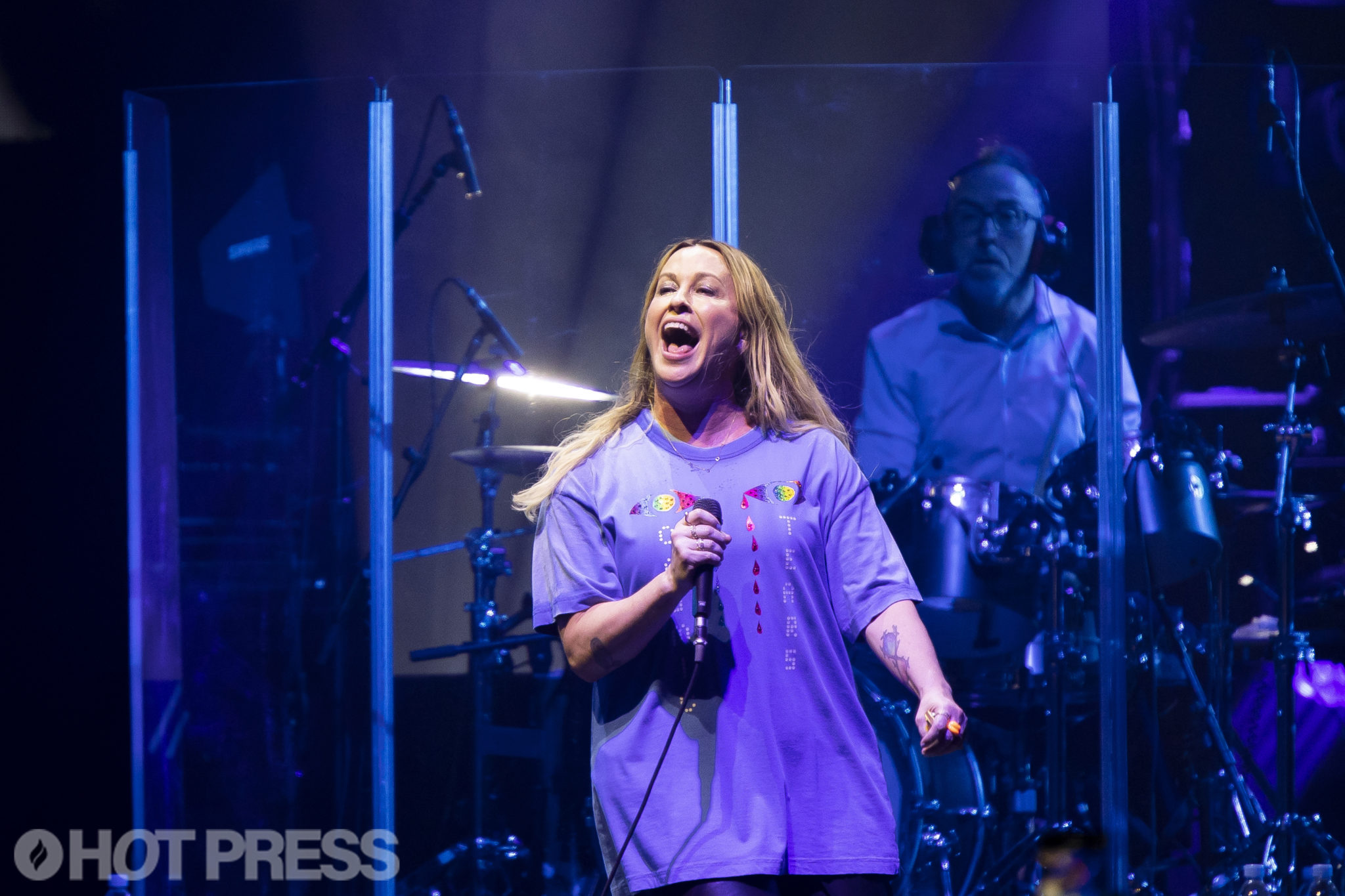 Brandishing a glittery guitar, ‘Head Over Feet’ is still the same sickeningly sweet ballad it was in ‘95, standing out in her discography like a spotlit gem or an aching limb. When it comes to crafting alternative songs, it’s easier to be sardonic than sincere – but Morissette manages both simultaneously. The audience erupted as she sang, “You’re my best friend, best friends with benefits,” before letting go of her acoustic strings for a harmonic bridge breakdown.

Verging into more modern territory, ‘Ablaze,’ a crooning ode to the singer’s three children, began as a sawtoothed whisper and blossomed into a hearty, Morissette harmony. A slideshow of family photos behind her made the whole thing feel like jumping from the chaotic diary entries of a twenty-something straight to the final chapter, fruitfully full-circle.

In live form, ‘Wake Up’ executed the same unexpected turn it did as the last track on JPL. Morissette is impassive on the first half, scorned on the latter. Defeated, perhaps, when she crafted the song 27 years ago. But these days she has settled into her faded rage, having mastered the act of tapping back in for the sake of a powerful performance. She channelled that stored spirit for the outro, engaging in a duelling of guitars and howling, “Get out, get the fuck out,” to the echo of a transfixed audience. 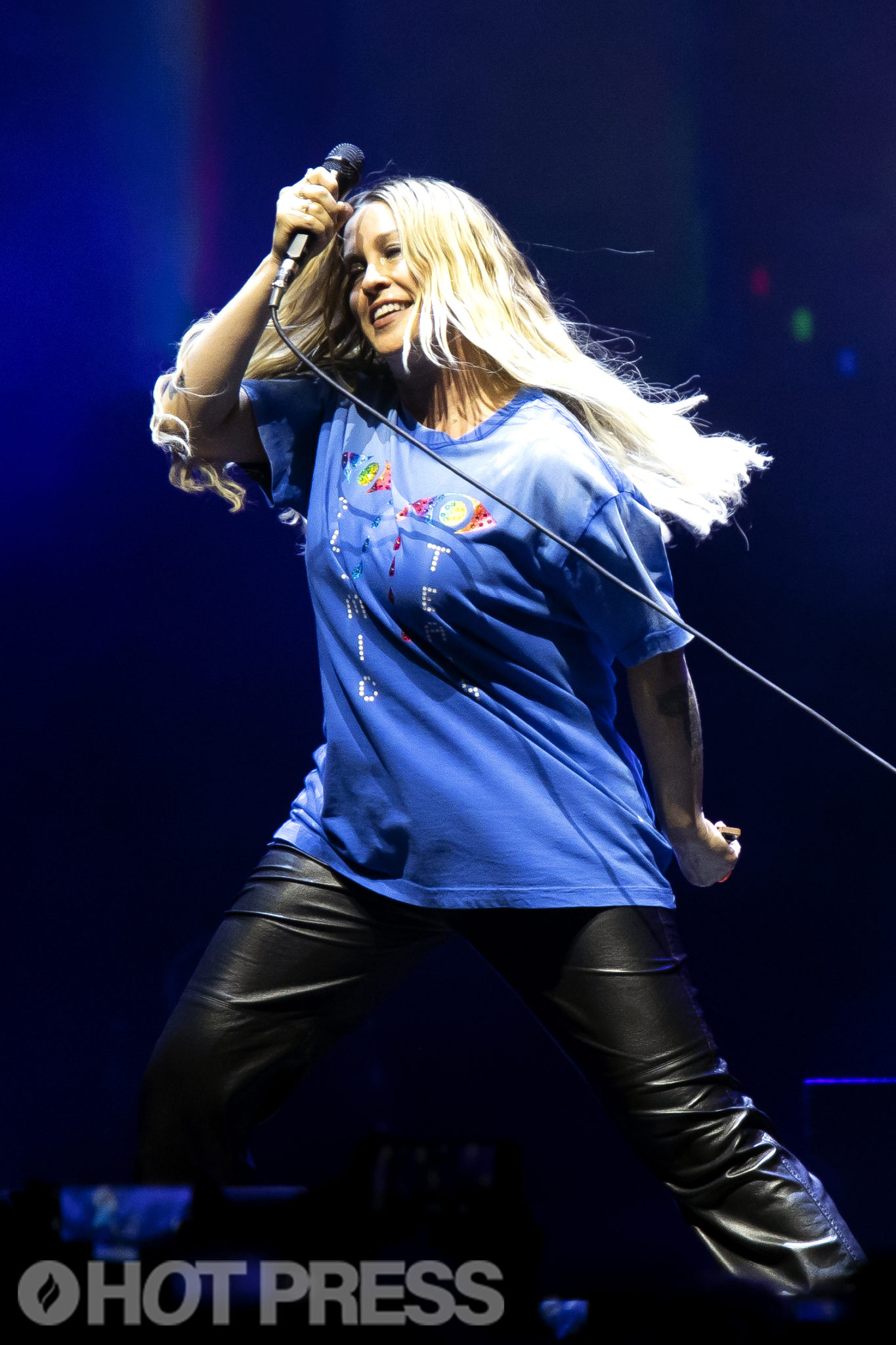 Perhaps the most iconic song on an already standalone album, ‘Ironic’ is the sonic essence of a decade – ‘90s with a capital 9. Morissette was barely audible over the chanting of the crowd, wherein even the least knowledgeable attendee would know such witty lines by heart.

She changed things up, singing, “Meeting his beautiful husband,” with a nod of affectionate pride. As the track faded to an end, the late Foo Fighters drummer Taylor Hawkins flashed on the projector screen in memoriam, paying tribute to the beloved musician who long ago toured with Morissette and her band.

The singer was the picture of demolition, spinning headfirst into the warped intro notes of ‘You Oughta Know.’ Her voice travelled into soprano territory through a dizzying guitar interlude, summoning the addictive anger out of each note. Only after entering the final door of Morissette's layered vortex did the singer shout a warm, “Thank you, Dublin!” and then prance offstage, skipping like a giddy kid. 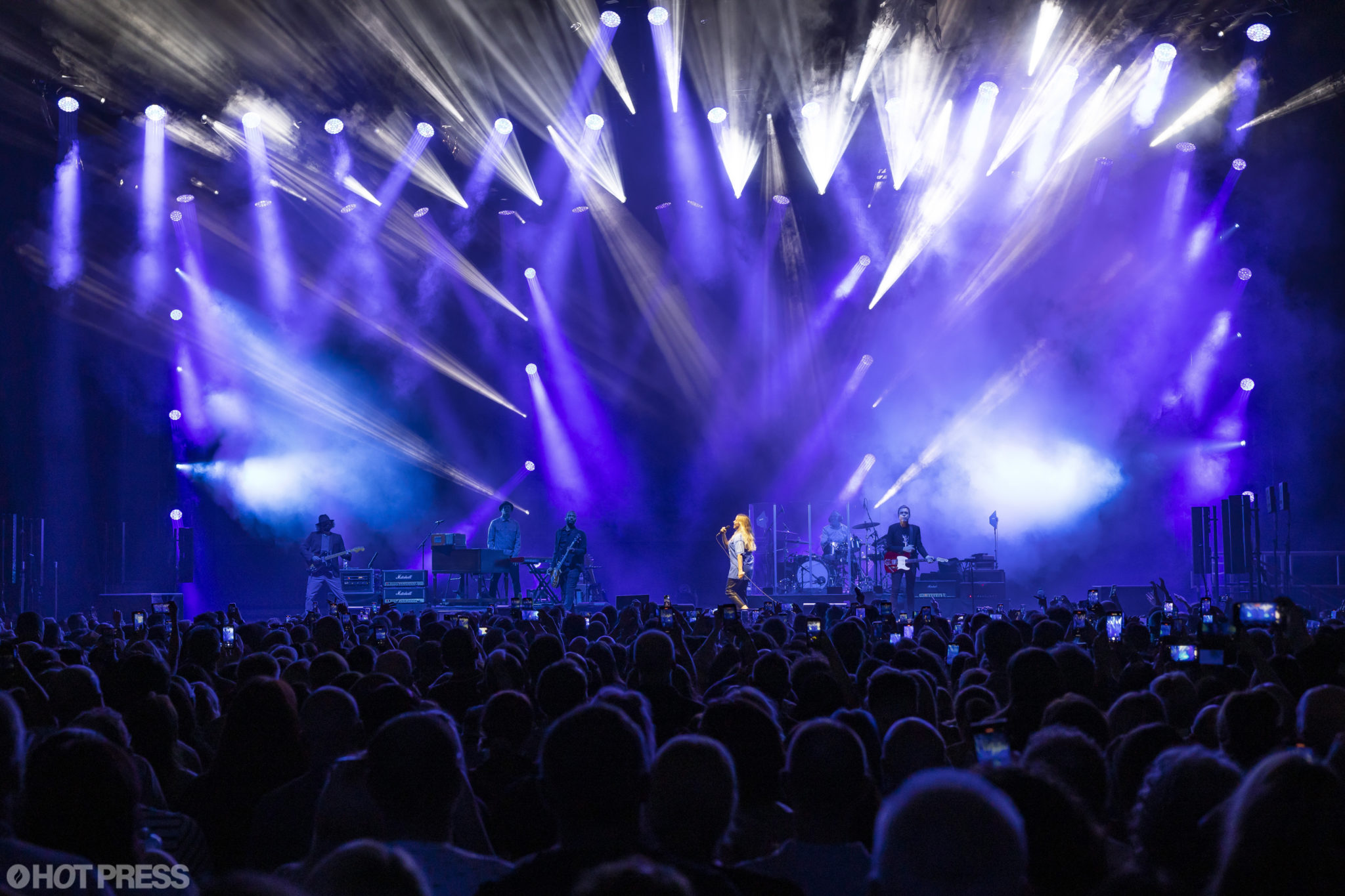 Even the arena lights refused to come up as pleas for “one more tune” filled up what little air remained. Her band wasted no time returning to their places for a brief but appreciated encore, followed by a jovial vocalist. The night ended to the mid-tempo tune of ‘Thank U,’ as a montage of JPL anniversary tweets decorated the screen behind the star. Morissette's series of provoking questions and relentless expressions of gratitude were a gentle embrace, warm enough to last the journey home.

Jagged Little Pill transformed narrative songwriting, with its singer refusing to apologise for having something to say. In the decades since its release, the enduring beauty of Alanis Morissette's Jagged Little Pill lies in one proven truth: she was an artist ahead of her time, thriving in the radical now.