King Princess: "I had so much positivity, and I was still feeling negative about myself"
Credit: Collier Schorr

She became an overnight sensation and Harry Styles favourite with her hit ‘1950’, but it’s taken until now for King Princess to feel truly comfortable in her skin. She talks about learning to be a pop star, her unlikely starring role on a Netflix reality series – about cake! – and why rumours of her being heir to a secret Titanic fortune are greatly exaggerated...

Mikaela Straus is ready to come into her kingdom. When the artist who records as King Princess released her single, ‘1950’, in 2018 the instant acclaim caught her unawares. Harry Styles was tweeting about her; magazines tipped her for imminent hugeness (Hot Press was one of the first to acclaim her as a voice to watch). Her streaming figures ran into the millions. It was a lot and it feels that it has taken until now, and the release of her second LP, for her to make sense of it.

“To put out one song that wasn’t promoted at all,” she considers. “and for it to literally just come out and people find it and love it, to have Harry Styles tweet about it – it definitely was trippy. What people don’t understand is that, when something goes viral, it doesn’t mean you have done the groundwork to be a long-term artist. I was playing catch-up with myself and my abilities because of the success of that song. I was like, ‘Well, I have one song out. I’ve never made an album before. And now I’m expected to make one’. Guess what? it’s fucking hard.”

Hard it may be – but Straus has made it seem effortless. Her debut album, 2019’s Cheap Queen, was a sinewy triumph and a vehicle for both her R&B-infused indie and her expressiveness about her queer identity.

And now she gives us the follow-up, Hold On Baby – a gut-punching, emotion-filled rollercoaster. Across its 12 tracks, Straus dips and weaves from pop to alternative rock and torch song soul-searching. It’s July, but I think I’ve found my Album of the Year.

“It’s a lot more introspective. I’ve had time to reflect,” she says. “I’m in a relationship. I have a lot of beautiful, stable, wonderful parts to my life. And sometimes, in those moments, where everything around you feels stable – that’s when you realise you maybe haven’t analysed yourself enough. In those happy moments you’re looking around and you go, ‘Wow, this is incredible’. Look at my dog and my fish tank and my girlfriend… And I get to go on these beautiful tours.”

You can, of course, possess all these things and still feel inadequate and incomplete. And it is with those unhelpful voices that she wrestles on Hold On Baby.

“I had so much positivity,” she says, “and I was still feeling negative about myself.”

Straus is an intense writer and it would be facile to describe Hold On Baby as upbeat. It is full of hope and joy. And yet she has a gift for turning sunshine into something darker and more interesting. For bringing drizzle to the parade.

You can hear this on the new number ‘Winter Is Hopeful’. It is a valentine to her partner Quinn Wilson (a creative producer who has worked with Lizzo among others) that re-lives an accidental row between the two.

The argument began when Straus told Wilson she adored her so much that she wished she [Quinn] was absent just so that she could pine for her. Wilson felt this was a strange method of communicating her affection and took it as an insult. On ‘Winter Is Hopeful’, Straus attempts to retrieve the situation by doubling down.

“Oh Quinn, I love you,” she whispers over and over. It is unclear whether this is a declaration or an invocation intended to dispel her partner’s stormy mood. Whatever it is and wherever it is coming from, it takes your breath away.

“Usually I write about heartbreak, and this is about one of those bittersweet moments,” says Straus. “I’m talking about love and having something being taken wrong. And then saying, actually, ‘All I do is think about you’. I feel a lot of times writing allows me to be self-deprecating. In a cheeky way this song, to me, is the perfect summation of that. It’s talking about the emotional and verbal clumsiness that happens when you’re in a relationship." 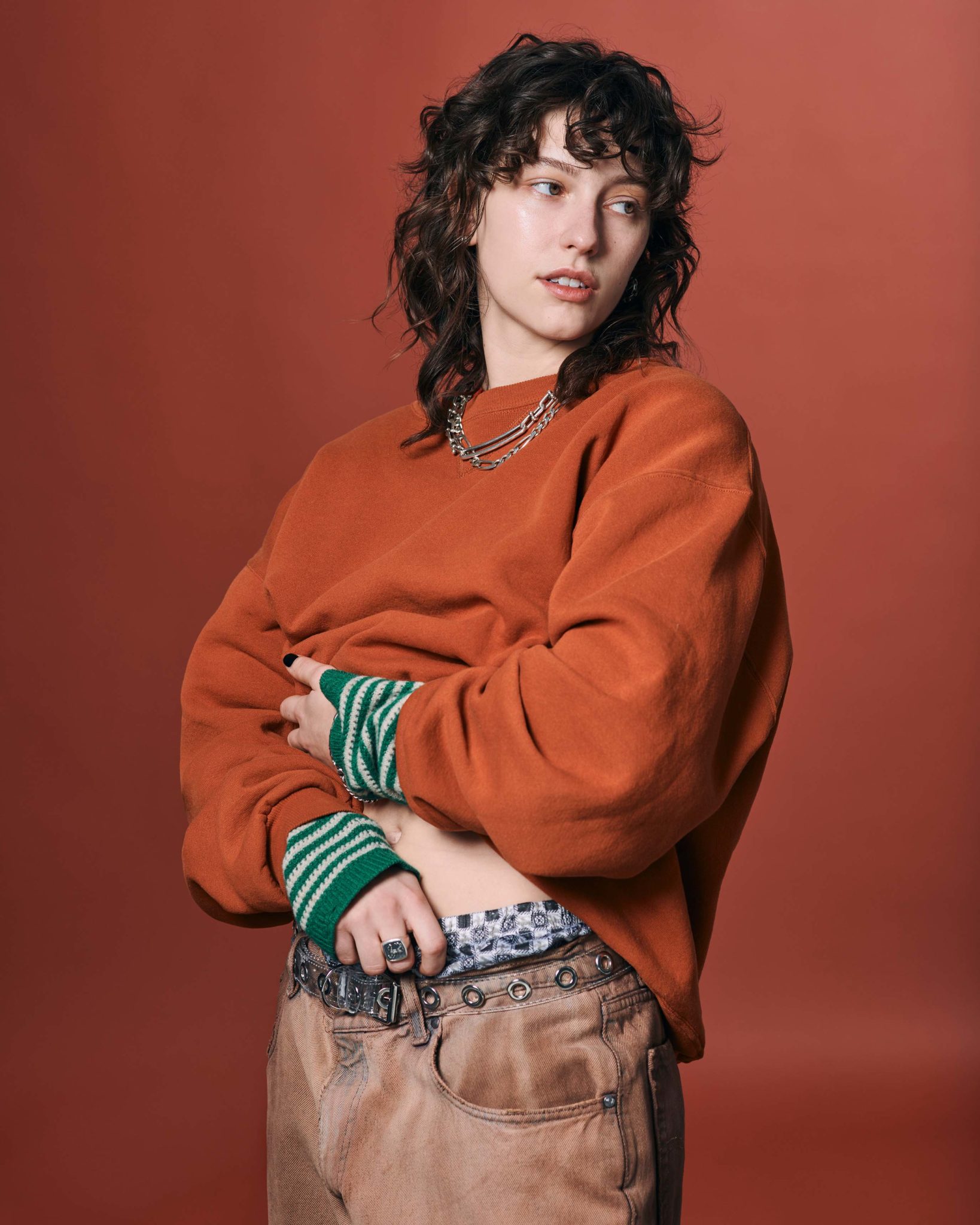 Hold On Baby comes with its own origin story. In February 2021 Straus’s grandfather passed away. She went to the funeral and then travelled straight to the rural New York studio maintained by The National’s Aaron Dessner. Dessner has a parallel career as a producer and has worked with Taylor Swift on evermore and folklore (as well as with artists such as Sharon Van Etten and Lisa Hannigan).

“I went to the funeral and from the funeral to Aaron, and honestly, I was in a vulnerable position,” says Straus. “And yet, I’m glad because, his honesty and his kindness and that of his family… it was this perfect thing.”

That 100-mile drive from Brooklyn to Dessner’s base near the Hudson Valley (where Swift made folklore) was understandably emotional. Straus doesn’t necessarily believe in the afterlife. Still, as she got out of the car and heard the birds and the wind through the trees, she felt her granddad’s presence.

“My grandfather was extremely connected to nature. To go to a place that’s surrounded by nature, where I’m being creative and being myself and I’m with my dog – that’s exactly his vibe. I felt that sometimes life works out that way. It’s one of those times when, in the moment, you’re not thinking about the meaning. And now looking back, what a beautiful thing – to go from a sad place to somewhere that was very, very symbolic of what my grandfather was about.”

Straus grew up in Brooklyn where her father runs a studio, Mission Sound, that Mark Ronson, Shawn Mendes and Dermot Kennedy have recorded in. There is some blue blood in the family: one of her great-great-great-grandfathers was Isidor Straus, a co-owner of department store Macy’s and a US congressman, who went down with the Titanic.

Inevitably this titbit became public knowledge as her star ascended: people put two and two together and added it up to millions. In the end, Straus had to go on Instragam and clarify that no, she wasn’t a trustafarian who’d inherited a fortune from the Titanic. Could people go back to discussing her music instead?

“That was annoying because, in addition to it not being true, how does that in any way have anything to do it whether my music is good?” she reflects. “We’re so quick to read something and tear people down. I don’t understand. That attitude is so antithetical to what we need right now. Like, internet trolls – you’re gonna really spend part of your day getting up on Twitter and saying something fucked-up to someone? Something that is rude and crazy. Like, why?”

“It’s almost as if, when you achieve a certain level of success, people stop seeing you as an individual. I think that’s really interesting. But also, at the end of the day, it’s about good music. If you don’t like my music, then I respect you. That’s cool. I will take that criticism. If you think that my music is shit, fine. If it’s not a fair critique of my music, if I’m not hearing this criticism, it bores me.”

She’d had a few unlikely adventures on the way to Hold On Baby. A few months ago, her team called her up with some “good news”.

The show, Is It Cake?, is a star of Netflix’s gonzo reality TV slate alongside Sexy Beasts and Floor Is Lava. It proved every bit as wacky as its title, and premise, suggest.

“I went and, I mean, they have you standing like 35 to 50 feet away from the cake,” says Straus. “I had no fucking idea if something was a cake or not. And my manager was like, ‘I would not be shocked if this becomes one of the biggest shows on Netflix the week it comes out’. And I was like, ‘Honestly, in this world we’re living in, anything is possible’. And that’s exactly what happened. Now I get people who are like, ‘Oh, are you from Is It Cake?' And I’m like, ‘Yes, I guess that’s me’.”