Phil Lynott and Luke Kelly are to be similarly honoured.

Following from last week's news of the announcement that the Central Bank of Ireland is issuing a new €15 coin to commemorate the life and work of Rory Gallagher, the date of its unveiling and its design have been revealed.

To be presented on September 17th, the design features Rory, with trademark Fender Strat, striking a rock ‘n’ roll pose in front of a record label bearing the title of some of his best-loved songs.

It’s the first in a three coin Modern Irish Musicians series that next year will feature Phil Lynott, and in 2020 Luke Kelly.

“Proof coins are collectable coins and are not intended for general circulation,” we’re told. “They are minted using specially polished dies and blanks that give them a mirror-like finish. These coins are struck at least twice during the minting process. They are individually handled and protectively stored in order to prevent tarnishing. This is in comparison to general circulating coins, which are struck once during the minting process and are handled in bulk. The defined, intricate and shiny appearance of proof coins gives them their collectable quality. For more information on commemorative coins, go to www.collectorcoins.ie.”

The Rory Gallagher coin will presented by the Central Bank Governor, Philip R. Lane, to President Michael D. Higgins in Áras an Uachtaráin on its day of release.

We have to say it looks amazing! 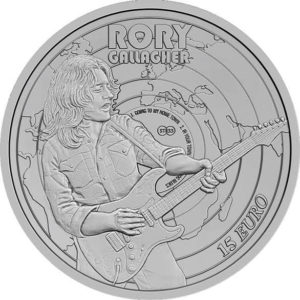 Kendrick Lamar tells young fan 'You are special' in heartfelt letter
The Year Of Living Dangerously: "Is there any sensible way back from the brink?"
On this day in 1981: The first Slane gig took place – featuring Thin Lizzy, U2 and more
A&R Department: M(h)aol, Hannah Horan, Jack Dora, Local Boy and more
Ross Killeen's Damien Dempsey film Love Yourself Today to have TV premiere on RTÉ One this week
Solange announces composition for the New York City Ballet