Star struck? Ever so slightly. It’s not every day that you get to meet – apologies to Taylor, Miley, Lana, Beyoncé etc. – the hottest pop star on the planet. And with oodles of credibility to boot. We’re backstage at Electric Picnic where in just over three hours, Eilish will play to one of the biggest Main Stage audiences ever - and get a humongous roar when she mentions her Irish roots. Photos don’t do justice to her hair, which is a none too delicate shade of neon green, and appears to radioactively glow every time the sun hits it. I’m not sure I could pull the look off myself, but on the prodigiously talented 17-year-old it’s stunning.

Accompanied by her mum, dad and elder brother Finneas, of course, Billie arrived in Dublin yesterday afternoon. Time has been tight, but they managed to drive round the Phoenix Park, which she proclaims to be “stunning.”

“We saw some deer, which you don’t get too many of in L.A.,” she jokes. “It was really pretty. Our hotel’s right next to the river, which looks incredible. I don’t really get to walk anywhere these days, but I get the sense that it’s a great city to just dive into and explore.”

She genuinely couldn’t wait to get to Dublin because that’s where one of her all-time favourite movies, John Carney’s Once, was shot.

“Our schedule didn’t allow it, but the next time I’m in Dublin I want to recreate that photo of Guy with his guitar on his back and Girl walking through Temple Bar,” Billie says with a grin as wide as the aforementioned Liffey.

The whispers I’d heard earlier about Once co-star, Glen Hansard, coming down to Stradbally to meet Billie turn out to be true.

“I’m not sure I’ll be able to hold it together when we meet because I’m such a massive fan,” she confides as we sit down for our natter. “Once was my mum and dad’s movie and my brother’s movie, so it was sort of handed down to me by them. I love Glen Hansard. Meeting your heroes is sometimes disappointing, though. I hope this won’t be.”

When I tell her not to worry, Glen’s lovely, she almost yells back: “Great, I love hearing that! Actually, dude, I’ve met some really great people recently. Sporty Spice who’s so nice, Billie Joe Armstrong from Green Day, Avril Lavigne and Justin Bieber. It was very surreal because for all my childhood and teenage years I had posters of Justin on my wall. He’s a really nice guy.”

Billie has only nice things to say as well about Pharrell Williams who interviewed her recently for V, the style magazine for cool kids who think that Vogue has passed its sell-by date.

“He’s so sweet,” she coos. “That was a couple of months ago on the ‘phone. I was in Seattle on tour but we’d met a couple of times before. It was so wild to be hanging out with Pharrell; he’s always been such a legend.”

The striking cover shot by Dutch brother and sister fashion duo, Inez and Vinoodh, makes her look like a Goth princess.

Pharrell’s gob was comprehensively smacked when Billie told him she literally dreamed up the video for ‘Ilomilo’ – that’s the one where she’s slo-mo sitting on a giant ladder – in her sleep.

“I immediately woke up and was like, ‘Oh my God, that’s a video I have to make!’” she explains. “My dreams are so random and so intense no matter what I do. I dream a lot of my visuals; like the whole album is based around a drawing of this character who repeatedly features in them. It’s kind of cheating because I’m doing the work subconsciously!”

Another of Billie’s A-List celebrity pals is Stella McCartney who supplied her with the psychedelic Beatles-inspired two-piece she wore at Glastonbury.

“Billie, her brother and her whole family have a musical story which completely fits with my own upbringing,” McCartney enthused afterwards. “We’re all vegetarians, vegans and animal lovers; we spent a lot of time talking about our obsession with horses and how they are completely healing and save our souls. In my eyes, she has been really great at self-preservation. It’s important for me to align myself with people that believe in the same things as I do, so I can have honest and true conversations.”

Which, as endorsements go, is pretty damn ringing.

“I went to Stella’s headquarters when we were in London,” Billie resumes. “I totally respect that she doesn’t use any animal materials in her products. There’s no leather, there’s no fur. It’s all vegan and animal cruelty-free, which with global warming and everything is really, really important. A big part of the problem is people not realising the impact that the meat and dairy industries are having. The Amazon forest is being fucking burned down to make way for farms where they kill and butcher cows. That’s why it’s happening.

“It may sound stupid and simplistic, but enough of us doing the right things will make this world a happier and better place.”

I’ve been dabbling with veganism myself recently; the biggest conundrum being which milk substitute to go with?

“Oatly’s great,” she recommends. “They do a special barista one for coffee.”

Has Billie got to meet Stella’s old fella yet?

“I’ve not, no, but when we went to meet her at her headquarters she was like, ‘Let’s FaceTime dad.’ I was there with my whole family and we all grew up on The Beatles.”

“Dude, tough questions! I only have to listen to ‘Something’ to be reminded of all that’s good and beautiful in the world. I love that song. ‘A Day In The Life’ is amazing too.”

“Yeah, so I’m like, ‘But your dad’s Paul McCartney…’ and she goes, ‘Er, yeah, I know.’ Stella gets him up on screen and my mum cries, may dad cries, my brother cries and then I cry; it was a chain reaction. We were all blubbering, but it was cool!”

Billie’s belief in herself and her generation was evident earlier in the year when she proffered that, “Teenagers know more about the country we’re living in right now than anybody. We’re being ignored and it’s so dumb. We know everything.”

Which given what the likes of Greta Thunberg and gun control activist Emma González have been up to recently is impossible to argue against.

“I’ll be eligible to vote for the first time in 2020,” she eagerly notes, “which I can’t wait for. Last year I took part in a registration drive in Los Angeles with the mayor, Eric Garcetti, because one of the most fundamental ways to feel empowered is to vote. People think, ‘Oh, I’m only one person’ but it’s like, ‘Bro, if we all thought that way nothing would ever change.’ You gotta vote!”

Billie Eilish seems to take this pop star lark in her stride, but there must be moments when she goes, “Hang on a second, this is insane!!!!”

“Oh my god, that thought has been floating around my head more than ever before recently,” she confides. “How can walking out to all those tens of thousands of people at Glastonbury be anything other than crazy? My first ever arena show was in March, so this is still new to me. I was standing on stage in Prague the other night with all these people screaming my name and just started crying. The crowds in Russia didn’t know what the fuck I was saying but, oh my god, the energy coming from them. Getting to meet Justin Bieber and FaceTime Paul McCartney; that’s never going to be normal.”

Does she feel the pressure of people, particularly young teenage girls who are out in force at Electric Picnic, being so emotionally invested in her music?

“Growing up I felt exactly the way that they feel,” she concludes. “When somebody comes up to me in what might seem an inappropriate way or says something weird, I remind myself that the reason they’re doing it is that they have an intense feeling for you. I never ever met any of my idols when I was little, but if I had I’m sure I’d have lost my mind and sobbed. It’s such a privilege to be doing what I am right now.” 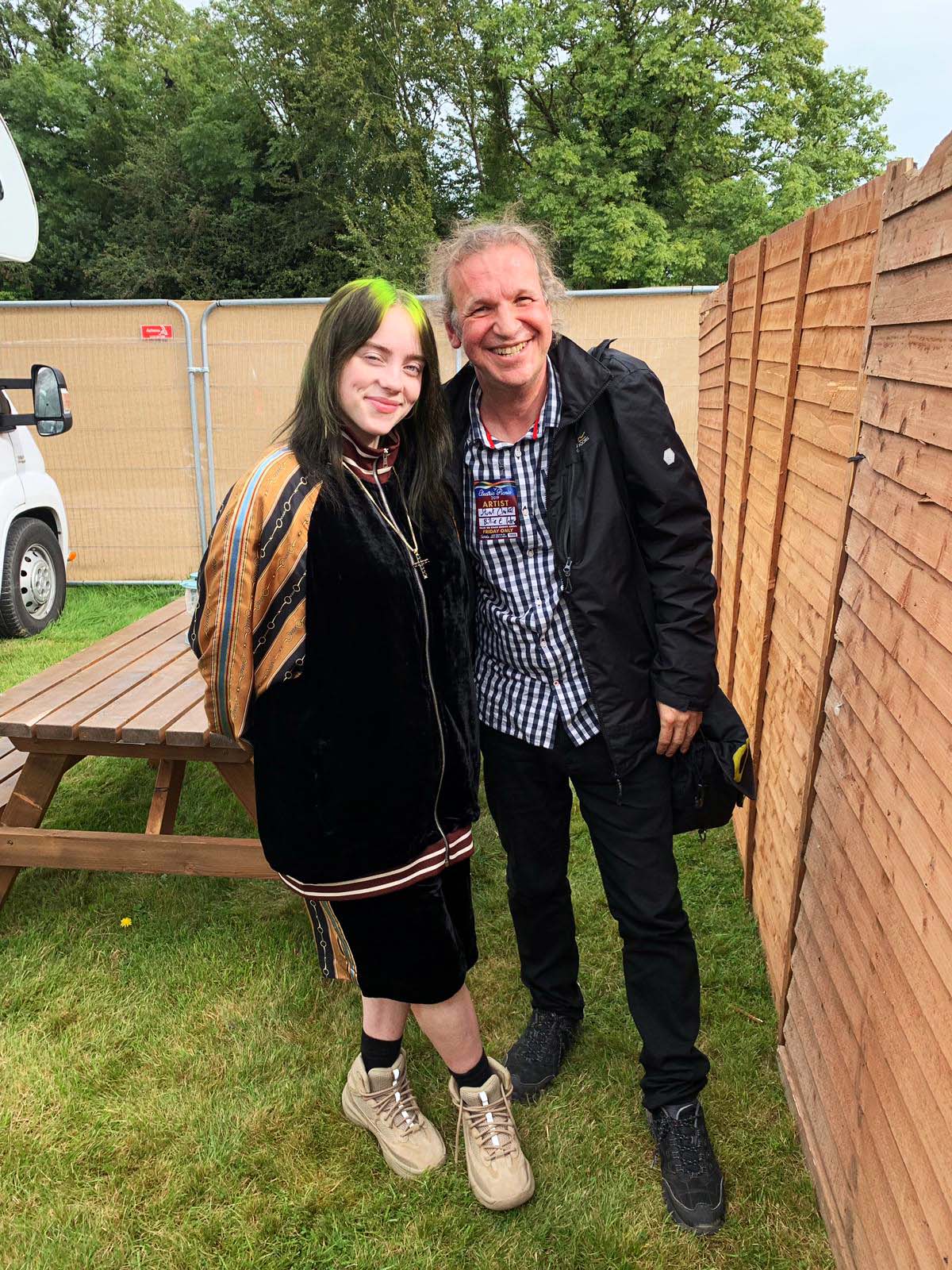 WATCH: Billie Eilish shares video for new single 'Your Power'
Billie Eilish announces release date for sophomore album Happier Than Ever
Rough Trade, Music Declares Emergency to present 'Music in the Climate Crisis' panel tonight
VIDEO PREMIERE: DeCarteret infuses neo-soul magic into new track 'LuvSeat'
Best-Selling Recording Artists, Singles and Albums of 2020 Revealed in New Report
Track of the Day: Holly Bealin - 'Nothing Left'
We use cookies to ensure you get the best experience on our web site - by using this web site you consent to our use of cookies. Read more »