Women's National League: "These are exciting times for women’s football in Ireland. The time to jump on board is now…."
Credit: Paul O'Mahony

Paul O’Mahony was at Tolka Park for what turned out to be one of the most memorable nights in Irish domestic football, as Galway Women’s FC unexpectedly dismantled leaders Peamount United and gifted the title to Shelbourne. It made a powerfully dramatic finale to this season’s SSE Airtricity Women’s National League.

Peamount United might have only themselves to blame. There’s been a rumour going around in certain football circles that when Peamount convincingly beat the Galway Women’s National League (WNL) team earlier this season, they were, shall we say, less than gracious to the Westerners. In the vernacular, some said they started ‘taking the piss’.

Whatever the veracity of that bit of spice, Galway – who had little to play for in terms of the league – certainly seemed to be extraordinarily motivated for their final-day clash with the West Dublin outfit.

Peamount may have hoped for a stroll on their home turf at Greenogue to make it three-in-a row of league wins. Those hopes were left in tatters, however, as Galway battered them 5-2, effectively presenting the title on a plate to Shelbourne – who were simultaneously putting Wexford Youths FC to the sword 3-2, in a tense second-against-third battle in Tolka Park.

‘All’ Peamount had to do was win: any margin would do. Shelbourne also had to win to have any chance of capitalising on a Peamount slip-up. It seemed unlikely, but sport is based on chasing dreams. A Peamount-Galway draw and a Shels win would mean a playoff between both three days later. You’d never know.

That the two matches were happening simultaneously magnified the drama. It also reaped big dividends for TG4 who, in classic ‘showdown’ TV style, ran a split screen between the two venues as the goals rained in, 12 in total, on one of the most memorable nights in recent Irish domestic football history.

It was a ringing vindication for the Irish language channel, who took the bold step of beginning to televise live women’s soccer in this country. Having already been repaid with some excellent games over the past few months, this was the ace in the pack, the crazy climax that surpasses all expectations.

All appeared to be going to script as Peamount went up 2-0 against Galway. The fact that Shelbourne, a classy outfit all season under new manager Noel King, also went 2-0 up didn’t seem likely to matter. But Galway were not done. Not yet.

Anyone who had seen Galway lose 2-0 to Shelbourne recently would have been impressed by a very fit, energetic side possessed of some fine footballers. Like DLR Waves, they are knocking on the door. And now was their moment to show just how hard.

There should be a terrace song called ‘There’s only two Emma Starrs’. She gets everywhere on a football pitch. One of the most mobile and intelligent players in the league, she was hugely impressive in that recent Shels match, covering every blade of grass and brilliantly knitting together some scintillating moves and one-twos. Now, against Peamount, the American-born midfielder was doing the same thing. She began to terrorise Peamount.

A menacing presence throughout, she opened the Galway account with a stunning strike off the underside of the crossbar from outside the box. 2-1. The news filtered through to Tolka Park that Galway had pulled one back. Reds fans are, shall we say, ‘philosophical’ at such times, ready to accept whatever fate might throw at them. There was no immediate surge of belief.

But they hadn’t reckoned on Galway’s drive and motivation. The Westerners equalised before half time. 2-2! Meanwhile, Shelbourne were cruising against Wexford, playing some wonderful football. They went in at the break two up.

What happened in the second half in Greenogue defied the form book. Galway set about finishing-off Peamount with brutal precision. They slotted away a third, then a fourth goal. Peamount were reduced to a shadow of their all-conquering selves.

Meanwhile, over at Tolka Park, Shelbourne’s joy was tempered by the concession of a goal, which put everyone’s nerves on edge. Supporters upped the volume in Tolka every time news broke from Greenogue. The Shels players looked in shock themselves: their game starting to unravel, their flow disturbed by an increasingly boisterous crowd egging them on. Shels conceding a second added to the escalating tension. 3-2. Across Dublin, Peamount conceded a disastrous fifth to a now rampant Galway. 2-5. Their goose was cooked.

It was at this point that Shels fans began wondering if they were about to witness ‘the most Shels thing ever’ – being presented with the title only to ‘blow it’ by conceding a third and equalising goal for Wexford and potentially giving Peamount a lifeline to a playoff.

The tension in the ground became unbearable. Wexford started to dominate. Presumably intended to be rested by her manager before the Cup final a week later, Shels brought on the mercurial Alex Kavanagh, she of the defence splitting passes and game-changing vision. Shels players Saoirse Noonan, Noelle Murray and Ciara Grant took every opportunity to take the ball to the opposition corner flags to kill time. With seconds remaining, Wexford had an effort on goal saved by Shels keeper Amanda Budden.

The final whistle blew. It was all over, bar the screaming and shouting and people having delirious fits on the sacred Tolka turf!

The pitch-invasion scenes were akin to the ones that happened in the glory days of the men’s teams. People were crying. Laughing. Cheering. Running around in circles. Hugging. Kissing. Collapsing in a heap on the ground. Of course, the celebrations were made all the more expressive, and expansive, by the completely unpredictable turn events had taken on the night.

Word got out that the SSE Airtricity WNL trophy was being driven at speed from Greenogue across to Tolka Park, allegedly ‘under escort’. More drama. That must have been a tough watch for the defeated Peamount team. Bye bye league. Bye bye trophy.

For their part, Galway must have relished their place in deciding the destination of the title. It was no surprise when TG4 awarded Emma Starr with the SSE Airtricity ‘Player of the Match’. She was that, and so much more besides. 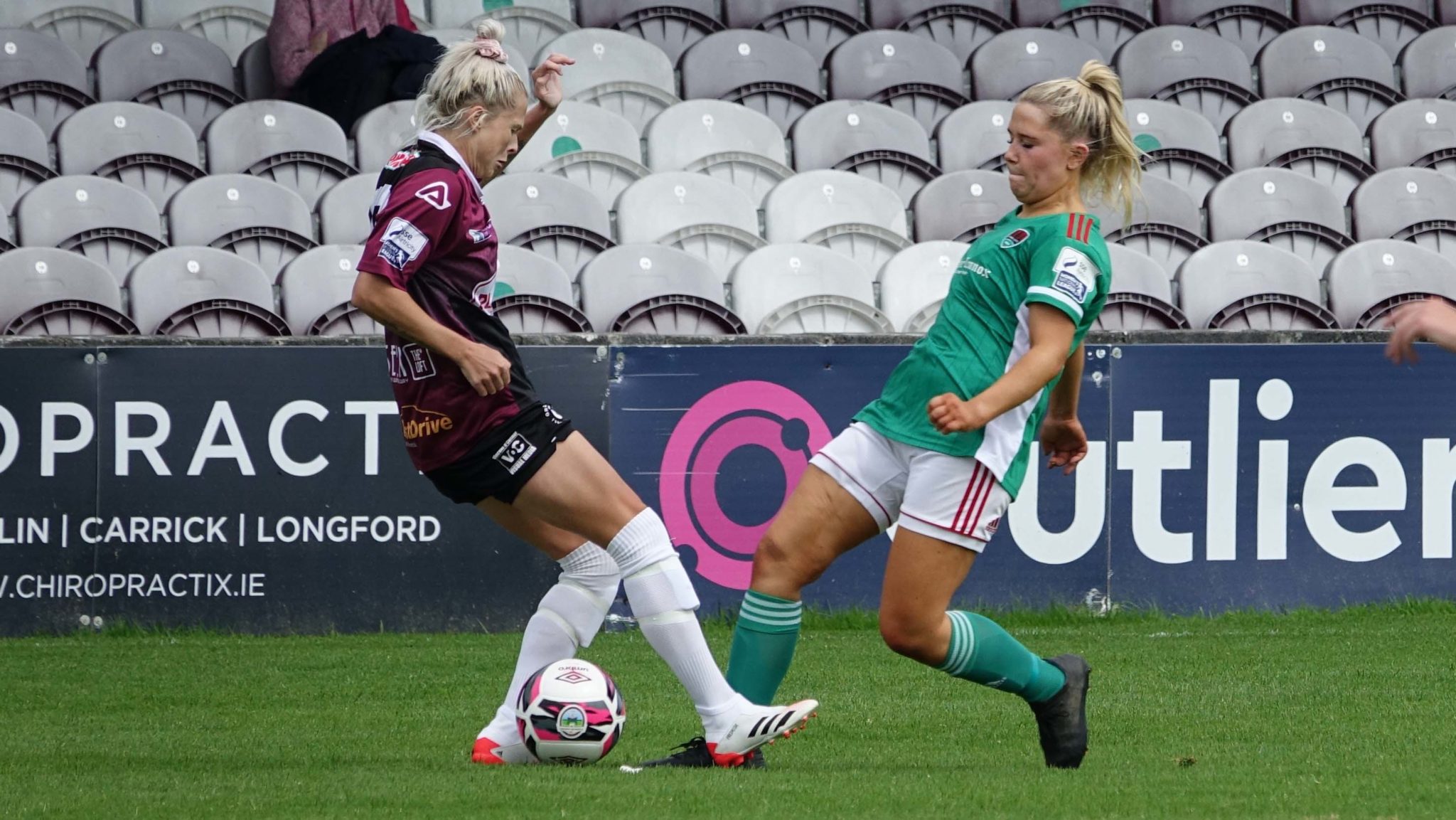 Even within their own club, it is arguable that the Shels women have consistently played a more attractive brand of football than the senior men’s team these past few seasons. You can argue that winning the title is just reward for sticking to such an entertaining philosophy. Then again, you can say that Peamount blew it royally!

2016 was the last occasion Shelbourne won the WNL. This season, they lost some key players to the English Super League, but compensated by bringing through exciting new youngsters like Abbie Larkin and Jesse Stapleton. That bodes well. If the conveyor-belt of talent keeps functioning as efficiently, there could be happy days ahead.

Back in 2019, there were sometimes less than 50 people at a Shels WNL game. Shels club legend, Frank Young had a team sheet for almost everyone in the audience back then. This season, since the pandemic restrictions were lifted, attendances have swelled to between 300 and 600 depending on the opposition. Women’s football is developing rapidly. The hope is that it will continue to grow. Certainly, if Shelbourne can keep the momentum going, they are better placed than almost any other club to begin attracting thousands rather than hundreds of supporters.

One’s things for sure, however. Peamount will be very determined to bounce back next season. DLR Waves and Wexford Youths will continue to make progress. And Galway will be a force to be reckoned with if they can keep Emma Starr and channel the spirit the team showed in their dismantling of Peamount more consistently.

For Shelbourne women, this was a very special moment indeed. They had finished second for the previous three years. Now they had finally attained the summit. Sometimes you need a break. Galway – and Emma Starr in particular – should be on their Christmas list.

The overall message is clear: women’s soccer in Ireland is developing at a great pace. The players are improving quickly too. The quality is better than ever. So is the entertainment. Try giving the screens a rest for a few hours next season, and go see a few live games.

These are exciting times for women’s football in Ireland. The time to jump on board is now…. 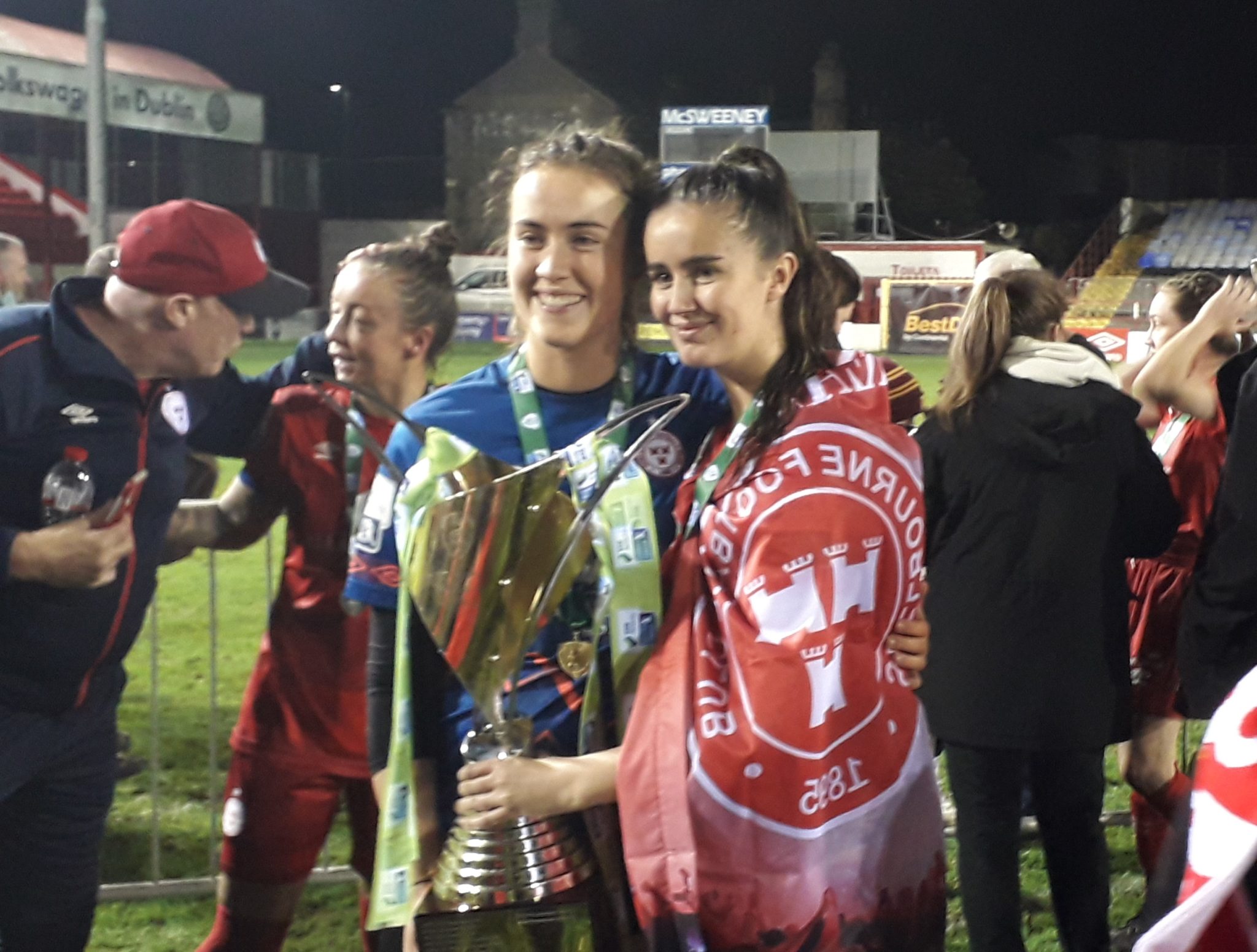 AFTER THE BALL IS OVER

Many a heart is aching, if you could read them all, many the hopes that have vanished – after the ball. The old song pretty much sums up Shelbourne’s experience as they failed to do the double this year…

There was always a strong likelihood that newly crowned WNL champions, Shelbourne, would suffer ‘the mother of all hangovers’ after the previous week’s league title drama, when they squared up against Wexford Youths FC in the Evoke.ie FAI Women’s Cup Final.

And so it proved. Before a record crowd of 3,053, Wexford Youths took full advantage of a disjointed and incoherent display from Shels.

The newly crowned league champions were not helped by what seemed like a very strange team selection by manager Noel King who, again, omitted his best playmaker in Alex Kavanagh. For Shelbourne fans, it was dispiriting to see pass after pass being either overhit or under-played as Wexford got a grip on midfield and responded to Shels’ sloppiness with quick counter attacks that had the Reds scrambling.

In particular, teenage sensations Ellen Molloy (17) and Aoibheann Clancy (18) were running the show. Remarkably, King failed to make any Shelbourne substitutions until inside the last 10 minutes, eventually introducing Kavanagh and young Abbie Larkin. Too little too late. “A King-er trademark,” said one Shels fan behind me. Maybe he was being unkind.

TG4 may have reaped the benefits of the fine entertainment on show during the title showdown last week, but this was far from the greatest game for the RTÉ2 TV cameras to have caught. A combative Wexford Youths fully deserved their win 3-1 victory. Double-chasing Shels can count themselves fortunate the margin of defeat wasn’t greater.

Congratulations to the women from the Sunny South East.