"It's your moral obligation to speak out" – Congressman Jim McGovern on impeachment, guns, and the border
Brenna Ransden

Amidst the chaos surrounding American politics, Democratic Congressman and Chairman of the House Rules Committee Jim McGovern discusses the most pressing issues of the moment.

Yesterday, the United States House of Representatives formally began an impeachment inquiry against President Trump. Democratic Congressman and Chairman of the House Rules Committee, Jim McGovern, who has been calling for Trump's impeachment for months, voiced his adamant support.

"The president asked a foreign power to make up political dirt on a potential opponent," he wrote on Twitter. "He abuses the power of his office, threatens our national security & undermines our constitution which he swore to uphold. As I have said before, he is unfit for office & should be impeached."

The president asked a foreign power to make up political dirt on a potential opponent. He abuses the power of his office, threatens our national security & undermines our constitution which he swore to uphold.

As I have said before, he is unfit for office & should be impeached.

However, for Congressman McGovern, there are myriad other issues facing the American public that deserve air time as well.

News of the senseless massacre of dozens of people in violent mass shootings seems to be impossible to escape in the U.S. right now. The horrific image of kids being kept in metal cages along the border is burned into the psyche of a generation of young Americans. Meanwhile, the reckless foreign policy pushed by the Trump administration has continually diminished America’s global reputation throughout his tenure in the White House. So, with a mere 13 months to go until the 2020 election, all eyes are turning stateside in the hope that, just maybe, we’ll be able to turn it all around.

In the the previous issue of Hot Press, 1988 Democratic Presidential nominee Michael Dukakis argued that the Democrats must recover control of the White House and the Senate in 2020, in order to regain order and effect positive changes in America. However, Democratic Congressman Jim McGovern – who has represented the Massachusetts 2nd District in the House of Representatives for the past 25 years – believes that’s only part of the problem.

With a never-ending spate of mass shootings on American soil, one of the most critical issues of the next election will be gun control. According to McGovern, this is not an issue of red versus blue: it is about money and power.

“I always tell people to follow the money,” says McGovern. “The NRA and the gun lobby poured tens of millions of dollars into Donald Trump’s campaign for the Presidency. So, nobody should be surprised that Trump doesn’t want to do anything that’s contrary to what they want.”

Mitch McConnell, the Senate Majority Leader and the most powerful Republican in Congress, has been the focus of much criticism for stalling gun legislation this summer. McConnell has refused to bring to debate, or to allow a vote on, two bills that have already been passed by the House of Representatives this spring, which would require background checks on all gun purchasers.

In the most recent mass shooting in Midland and Odessa, Texas, the shooter took advantage of this loophole after failing a federal background check on the basis of mental instability.

“Yet again,” says McGovern, “the NRA’s money has become the lifeblood for a lot of these Republican candidates, the President and the Senate Majority Leader included.”

Following the spate of massacres this summer, dozens of Congress members – including McGovern – wrote a letter demanding that the Majority Leader should bring the Senate back into session to vote on the measures. President Trump and Senator McConnell initially expressed interest in getting the bills passed, but Republican support seemed to fizzle out fast in the following days, as the NRA retook control of the narrative.

“Follow the money with regards to who supports Mitch McConnell and his allies in the Republican party,” says McGovern. “It’s the gun lobby and the NRA. So, you know they value that money more than they value the lives of innocent people in the United States. The fact that the Senate Majority Leader refuses to act – in my opinion – means he has blood on his hands. I don’t know how he can look at himself in the mirror every morning.”

With obvious pain in his voice, Senator McGovern recounts his conversations with the parents of the slain children in Sandy Hook; the friends and parents of those murdered in their classrooms in Parkland; and the survivors of the Las Vegas massacre. 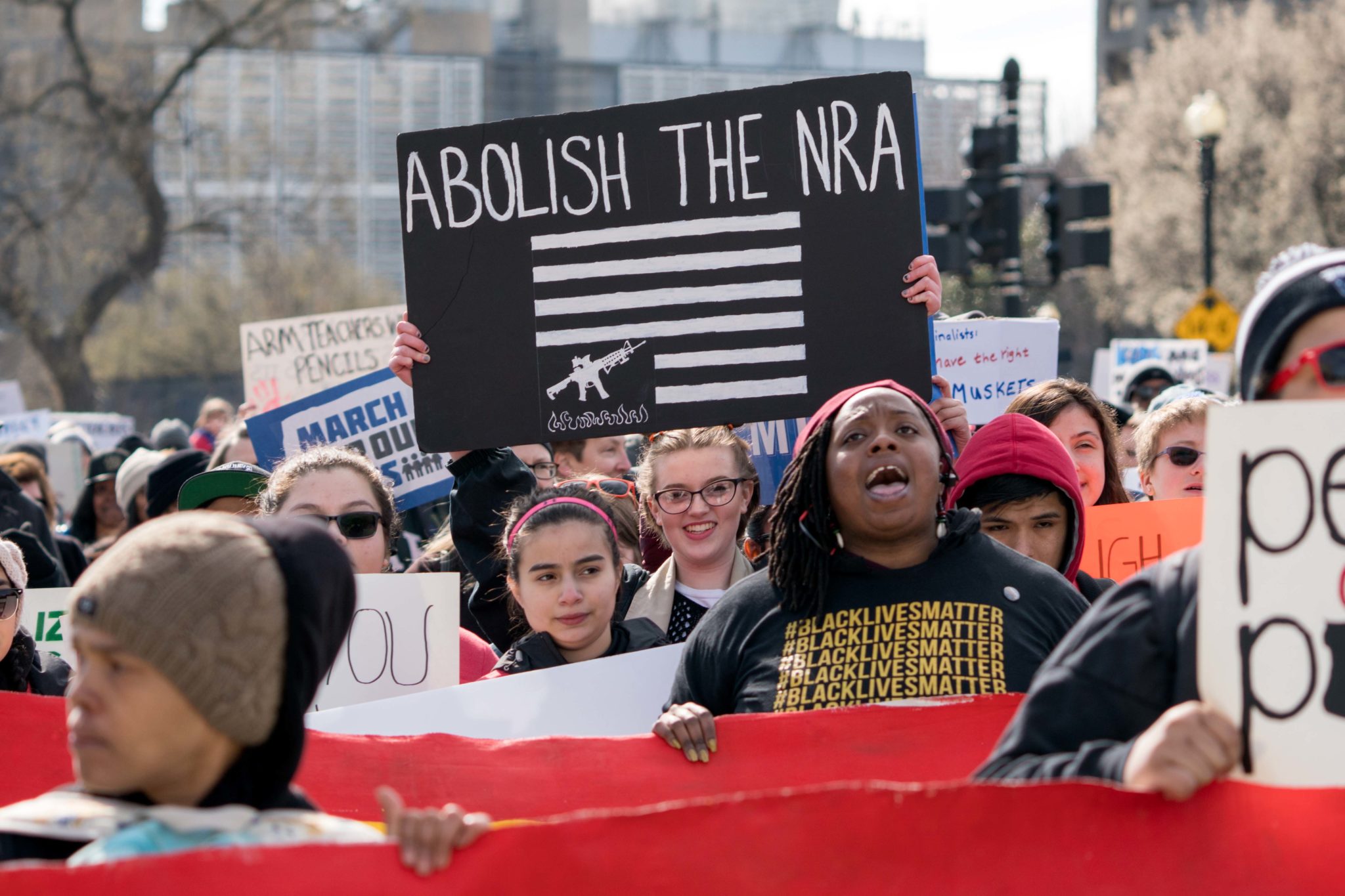 In fact, McGovern adds, neither party is fully innocent. Back in 2008, when Democrats controlled the House, the Senate, and the White House, no major gun legislation was passed.

“I think that was a shame that Democrats blew an opportunity to enact sensible gun laws when we were in charge of all three branches of government,” says McGovern. “We should’ve dealt with this issue more forcefully a long, long time ago. But the one thing I do know is you can’t change the past, but you can shape the future. Shame on anybody who allows the status quo to remain in place. And the only way to do that is to change our laws. Not make excuses.”

There is hope that the future might be reshaped in 2020. A recent New York Times study of the NRA and Congress revealed that legislators who defected from the NRA, and saw their ratings from the group downgraded, did better electorally than those who moved closer to it.

“I believe that the renewed activism on this issue,” says McGovern, “is influencing not only incumbents, but people who are running for office. I feel it everywhere I go. It’s not just in urban areas – it’s in rural areas as well. And not only in Democratic-leaning states, but in Republican-leaning states as well.”

Representative McGovern first visited Central America back in 1983 and witnessed El Salvador in the midst of a civil war. Since then, he’s been returning regularly to Central America to monitor the US’s foreign policy in the region, most recently this August.

“One of the things I remind my colleagues of all the time,” he says, “is that the United States has a long history of intervention in Central America. And much of that intervention has been bad. We have overthrown governments. We have supported militaries and security forces that murdered their own people. We have deported gang members to these countries. We supported wars, but when the wars ended, we stopped supporting the rebuilding of these countries. So, we have a long and not very positive history in the region.” 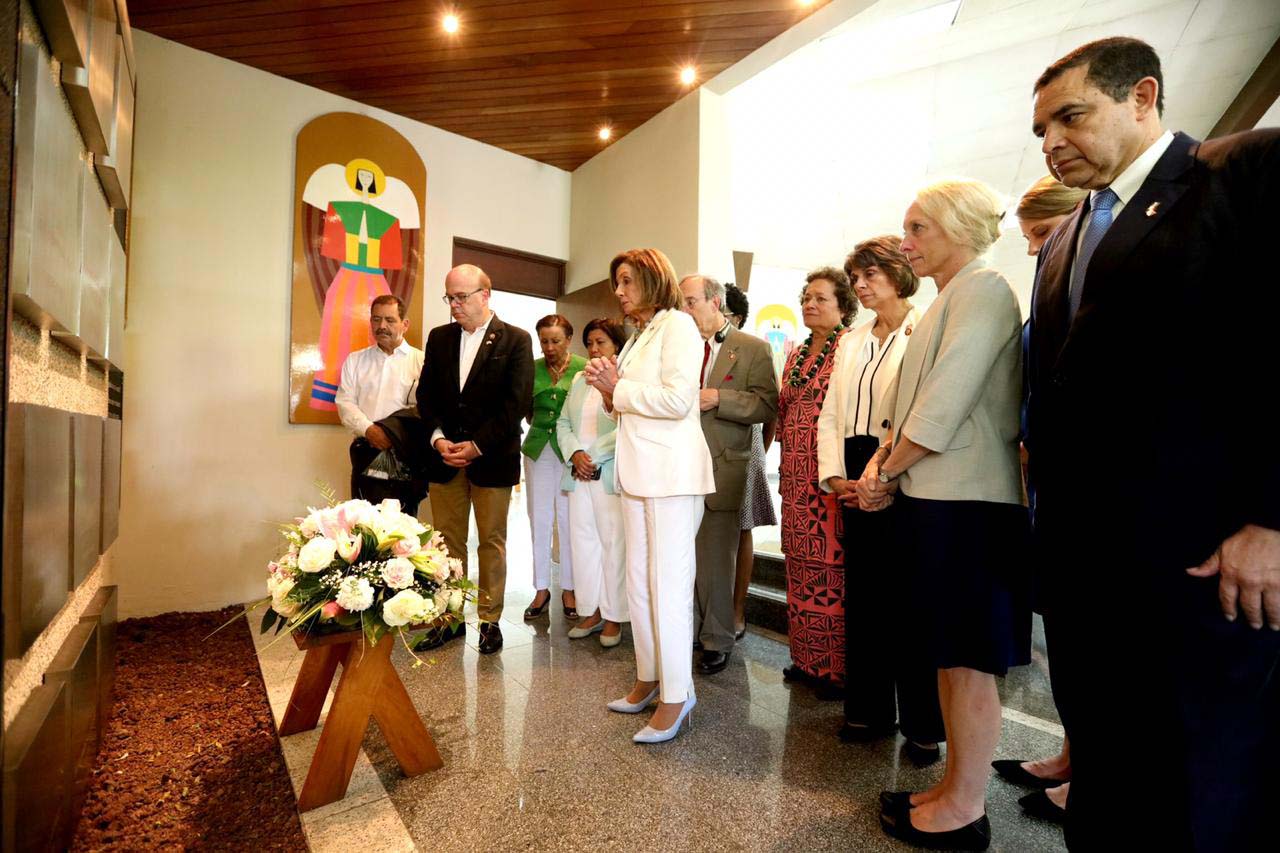 Congressman McGovern and Speaker of the House Nancy Pelosi in Guatemala.

Contrary to what Trump may say, many immigrants at the country’s southern border are not rapists and murderers from Mexico. Rather, they are people from Central America seeking asylum from the violence they fled back home; violence that is in fact perpetrated by American guns.

“Many of the guns that are used by violent gangs and by criminal organisation are purchased in the United States,” notes McGovern. “It’s easy to get them here. So, criminal groups basically purchase arsenals and then transport them to Central America where they’re used in violent crimes.”

And the US government knows it. Between 2014 and 2016, nearly half of all guns recovered in criminal investigations in both El Salvador and Honduras were originally purchased in America according to the US Bureau of Alcohol, Tobacco, and Firearms. So are we actually perpetrating the so-called border crisis with our gun fetish?

“Absolutely,” nods McGovern. “People are coming to the United States because conditions in their home countries are unacceptable. I just came from El Salvador, Honduras and Guatemala. I went to the border. I talked to many of those in Mexico trying to apply for asylum. Most of the people I talked to are fleeing violence. And there’s no question that the violence is being exacerbated by the guns coming from the US.” 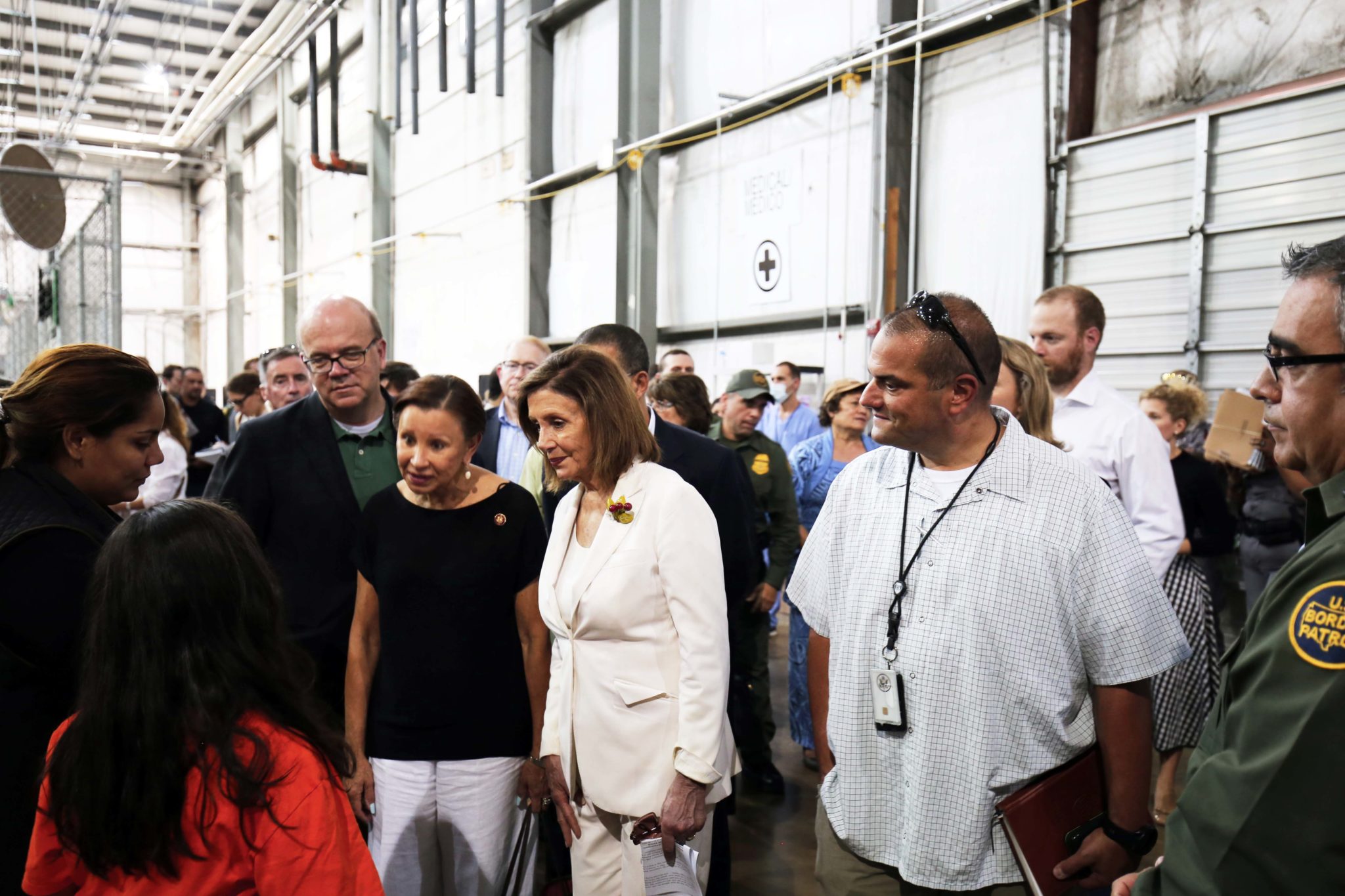 Congressman McGovern and Speaker Pelosi at a US Border facility.

As for how this all ties into the 2020 election, the border remains a contentious topic. But the ramifications of the next government’s border policies, and foreign policy, will extend well beyond Texas.

“If we want to deal with the migration issue at our southern border,” says McGovern, “we ought to start with the realities in some of these countries that are dealing with the worst violence you could imagine right now. People who have come to our border don’t make that perilous journey from their home country because they have nothing better to do. They do it because often they’re fleeing for their lives or the lives of their kids.”

Recalling the history of disastrous policy in the region, McGovern asserts, “We have a moral obligation to help these countries deal with some of their internal struggles. And it requires a President, a State Department and a Congress who understand the importance of engagement and the importance of providing support.”

The youngest demographic of eligible voters has always shown the weakest turnout in federal elections in the US. However, if the bump of participation in the 2018 mid-terms is sustained, the youth vote could be crucial next year. This demographic, according to McGovern, has the power to change the tide of American politics.

“I think young people in particular, but also the overwhelming majority of Americans, do not want mass shootings to be part of who we are,” he says. “They don’t want to accept that as the new norm. People are becoming more active in the effort to enact gun control legislation. More and more people are showing up to town halls where they’re raising this issue. The number of people who lose their lives each day from gun violence in the United States is unconscionable. And I think people are also outraged by the number of massacres that are occurring.” 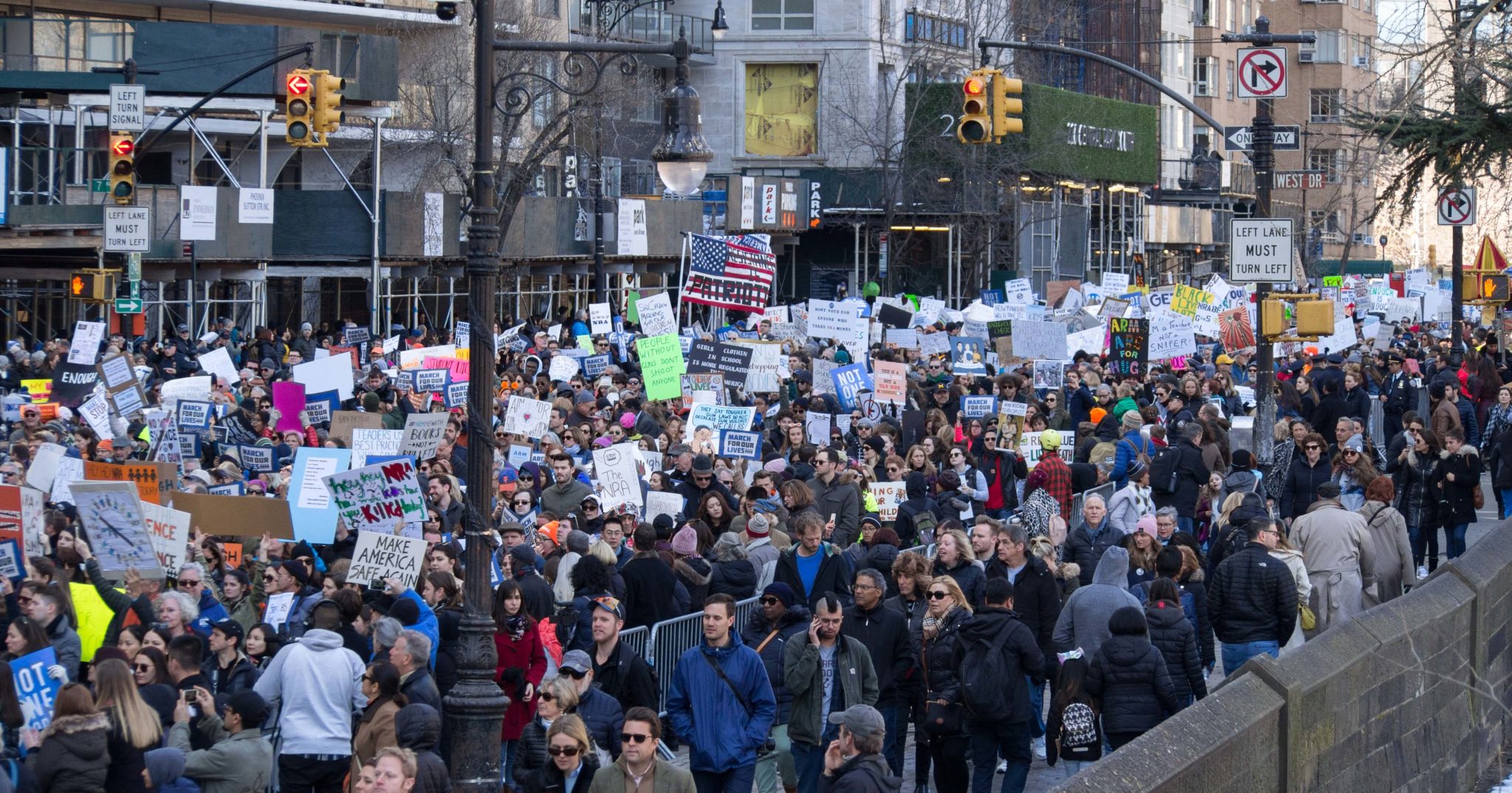 A Congressman since 1996, McGovern says the resurgence in youth activism is unprecedented.

Youth, whether they can vote or not, will indeed be crucial in 2020.

What’s McGovern’s advice for young Americans who fear they won’t have a future because of guns or the climate crisis?

“I always tell people,” he says, “if you love your country, and your country is doing something wrong, it’s your moral obligation to speak out . That that’s what true patriots should do. To be silent in the face of policies that you deplore, that’s moral cowardice. It gives me great hope for the future that I see so many young people who are really stepping it up. If gives me hope that we’re going to get through this.”

As for who he’d like to see get the Democratic nomination next year, McGovern is backing Elizabeth Warren.

“She’s smart,” he says. “She gets it. She actually has a plan for dealing with the crisis at our border that’s compassionate; it’s consistent with our values. She has a conscience and a heart. I believe she’d be a great President. I know her. I’ve seen her in action and I believe in her.

Fontaines D.C. Grace The Cover of The Hot Press Annual 2020
The dream has come true! Ireland set for the Tokyo Olympics!
CAO Special - Rachel Fogarty: "I’ve definitely benefited from the opportunities BIMM has brought me"
Lyons of Limerick: Introducing A Great Irish Motoring Phenomenon
Education Special - CAO 2023: "It’s important to recognise that your future is in no one’s hands but your own"
Veganuary: 5 of the tastiest plant-based restaurants in Ireland