The rowdy podcast duo are making their way to Cork in June 2023 for a massive outdoor show featuring special guests.

The 2 Johnnies have had a breakthrough year, smashing through goals many podcasts can’t fathom. The Tipp boys have reached a weekly audience for their show of 500,000, scored a second series for their TV show, secured a daily radio show on 2FM and were all the buzz at this year’s Electric Picnic.

Now, the podcast duo is taking on “their biggest challenge yet,” a one day festival at Cork’s Musgrave Park next summer, June 24. Moving the show that sold out Dublin’s 3Arena (twice) outdoors, ‘The 2 Johnnies “Pints in a Field” – The Usual Podcast Madness – In a Field,’ will mark the first stadium show for a podcast to date. 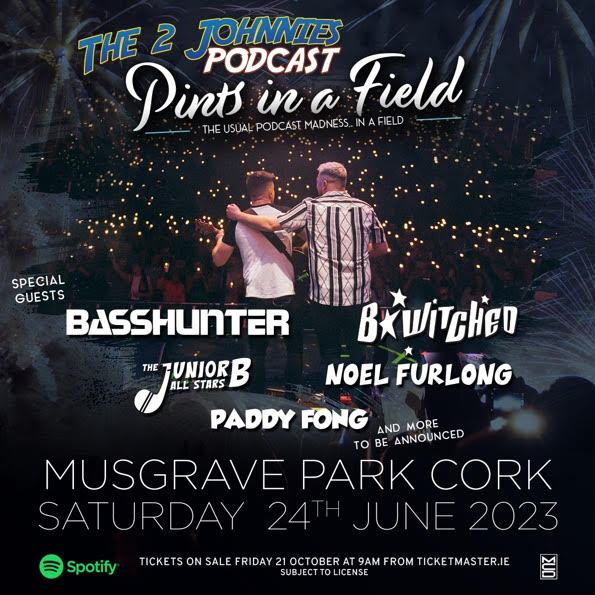 Tickets are on sale from €49.90 today, October 21 via Ticketmaster. The massive outdoor show will also feature special guests Basshunter, B*witched, The Junior B All Stars, Noel Furlong and Paddy Fong with more still to be announced.

Of the event announcement Johnny B expects the day to be, “Bigger than Live Aid but of far less benefit to society.

“It’s going to be the greatest atmosphere in a rugby stadium since Ronan O’Gara kicked a drop goal to win the Grand Slam in 2009.”

The announcement is part of the nation’s biggest podcast’s “masterplan” to have 70% of the Irish population in attendance at their shows by 2027. Well, they’re well on their way.

Tickets for ‘Pints in a Field’ are on sale now from €49.90 including booking fee via Ticketmaster. The one day festival takes place June 24, 2023 at Musgrave Park, Cork.

Disney+ share trailer for Extraordinary, starring Irish actors Máiréad Tyers and Siobhan McSweeney
Rian Johnson: "I wrote the Glass Onion script in the middle of the 2020 lockdown, wishing I was on a Greek island!"
Hot Press' TV Moment Of The Year: Derry Girls – "I can't remember half of the scene because I was just so distracted by Liam Neeson being sat across the table from me"