Normal People, Teenagers and Sex
Daisy Edgar-Jones at a scene from the Normal People official trailer.

The sex scenes in Normal People, the TV series based on Sally Rooney’s novel, have been the subject of considerable controversy. It may indeed be by far the most explicit film or TV series ever shot in Ireland. But are complaints that it gives a bad example to teenagers justified?

I would be lying if I said I wasn’t nervous about how the Hulu/BBC adaptation of Sally Rooney’s Normal People would handle sex. As much as some people might be loathe to admit it, sex is a central – if not the central – theme of the novel.

I was lucky enough to grow up in what you would call a "sex positive” household in Canada, where I was born. My parents established and encouraged open, honest conversation about sex from an early age. My mother’s instinct was that because I was bound to be exposed to it anyway, she might as well beat the Internet to the punch and explain it in a way that would leave as little wriggle room for miseducation as possible.

Growing up, most of my information about the world came from popular culture. Millennials like me matured in the era of endless, boundless content. There was always something new – a TV series, film, or book – to be consumed and digested. It added to the pressure that everyone else already had access to it.

On occasion, however, my parents insisted on reading a book or watching a film I was desperate for, in order to assess whether it was 'age appropriate'. More often than not, regardless of its sexual content (within reason, of course), they’d allow me to view it in their company. They would happily pause and explain when I had questions or if they felt it necessary to contextualise.

Still, when I watched the second episode of Normal People – the one in which Marianne has her first sexual experience with Connell – I felt incredibly emotional. Maybe, I thought, if the sixteen year old version of myself had this scene as a reference point for positive teenage sex – as opposed to the (relatively useless) public school sex education I’d received – my first experience of sex would have been different.

Perhaps it would have been more enjoyable. Perhaps I would have felt the confidence to ask for what I needed and wanted, rather than just “doing the deed”, essentially to get it over with. Sadly, even two sex positive parents can't erase decades of subliminal messaging in pop culture: that women are there to serve the pleasures and needs of men, to be gazed upon unflinchingly by men, to be vessels for men.

What ensues in Marianne and Connell’s first sexual encounter is perhaps the most unforced and natural display of ongoing consent I’ve seen on screen.

Both of the central characters in Normal People, played by Daisy Edgar-Jones (main pic) and Paul Mescal (below), seem to understand that it is necessary to ask, “does this feel good?” or “is this okay?” Connell tells Marianne that they can stop if she needs to, ensuring that she's aware that there won't be negative repercussions if they have to put their passions on hold. In short, he does everything right. They are equal and active participants in their own sex lives. 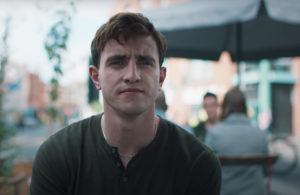 Paul Mescal in a scene from the Normal People official trailer.

At the same time, I struggled watching the intimacy. Their onscreen chemistry is so palpable that the scenes between them almost feel too intimate – and not just because you’re watching sex. You’re watching something deeply personal and emotional.

This might sound cringeworthy, but you are effectively watching two people fall in love without hearts or flowers or a score of swelling strings. In place of all the conventions of cinematic romance, or the self-deprecating awkwardness of comedic sex (à la Sex Education), in Normal People emotional connection is represented in straight-forward physicality.

I’d assume the caller had only watched the first two episodes, as they were all that was available to the nation at the time. Further on in the series, as Marianne’s mental health takes a dip, her relationship to sex – particularly violent sex – changes and is further explored. Those scenes – though fleeting and always focused on why Marianne is feeling a certain way about sex – might be more relevant to the world of pornography. But they are, frankly, beside the point.

One of the other triumphs of Normal People in its portrayal of sex is the relatively equal ratio of female-to-male nudity created by directors Lenny Abrahamson and Hettie Macdonald. There is little doubt that the involvement of Ita O’Brien, Normal People’s on-set intimacy coordinator (a profession that has exploded in popularity and necessity in the wake of the #MeToo movement) made a real difference here.

For other graphic television shows, the onus is nearly always on the female body to provide titillation before, during and after sex scenes. That’s hardly surprising, given decades of sexism in the film and television industry. But it seems that the people of Ireland (or at least those who listen to Liveline) were less concerned about the show’s nudity than they were about the sexual content of the second episode.

The second caller to the Liveline debate suggested that his problem with the show is that it “sets the wrong example for young people.” He also made comments about a different show, where the “scenes in the bedroom” showed women “covered up”.

There’s a lot to unpack in these statements, and honestly, I don’t have space (or strength) for it all! But what I gleaned was that this man thought that his daughters and their peers, in secondary school, would be encouraged to have sex by watching the explicit scenes in Normal People.

To suggest that teenagers shouldn’t watch Normal People because it might encourage them to engage in sexual activity is, frankly, ridiculous. For a start, I’d put money on it that they’re already consuming content that is far more explicit: just because they aren’t sharing information about their sex lives with you does not mean they aren’t engaging in the behaviour.

It is the prevailing culture of secrecy around sex that inhibits young people from asking their parents questions, or coming forward with issues. Secrecy, particularly around female sexuality, meant that my grandmother was unaware of sex until the night of her wedding. Thinking about how frightened she must have felt at the time makes me nauseous.

The culture of secrecy around sex is not and has never been helpful, and Ireland need look no further than the Catholic Church, and its legacy in this country, for confirmation.

I’m completely on the side of any parent who, having thought intelligently about it, decides that certain content is just too mature for a child of a particular age. My parents did that more times than I can remember.

The reality is that there are programmes out there which should be of far more concern than Normal People. In fact, if your children are going to view sexually explicit content, I can assure you that Normal People is a great, nuanced place for teenagers of all genders to satiate their curiosity.