Dublin gets set for the glamour of the big screen as Virgin Media Dublin International Film Festival returns.

The Virgin Media Dublin International Film Festival returns for its 17th year. Ireland's premier film event returns to the capital from February 20th to March 3rd, and will paint the town red with a plethora of the world’s leading movie stars and filmmakers flying in especially for the Festival.

The packed programme, which was launched today Wednesday 23 January, features over 125 events across 12 days including the finest local and international feature films, short films and documentaries, along with a dedicated children’s and young people’s programme and a host of special events featuring industry leaders. For more information and to purchase tickets visit www.diff.ie

What to expect from the festival

Kicking off the Virgin Media Dublin International Film Festival in style will be the Opening Gala and Irish premiere of Papi Chulo, the new film from Irish director John Butler, known for the award winning Handsome Devil and The Stag. Joining John on the red carpet for the premiere will be the stars of the film, Matt Bomer, known for A Normal Heart, Magic Mike and The Magnificent Seven, and his co-star Alejandro Patiño. The comedy drama tells the story of a well-heeled, lonely, gay TV weatherman who strikes up an unusual friendship with an older straight migrant worker from Mexico and deals with themes of friendship, class, ethnicity and economic migration.

Fans of cult TV show The Office will be thrilled to hear that Stephen Merchant visits the Festival for the premiere of his new movie, Fighting With My Family, bringing with him the true, colourful and crazy story of the rise of WWE Superstar Paige. Merchant wrote and directed the film, which tells the story of reformed gangster and former wrestler Ricky, his wife Julia, daughter Saraya and son Zak who make a living performing in tiny venues across the country. Ricky and Julia want a better life for their children and when brother and sister get the chance to audition for WWE, it seems the family dream is coming true and all their troubles will be solved, but their family bonds are soon put to the test. Wrestling fans seeing the movie should also keep an eye out for a memorable on screen appearance from champion wrestler turned movie star, Dwayne 'The Rock' Johnson who also produced this film.

One of the most exciting talents to come from Ireland in recent years and 2019 BAFTA Rising Star Award nominee, Killarney actor Jessie Buckley, attends Virgin Media DIFF with her new film Wild Rose for the Closing Gala. Starring alongside the much-loved and twice Oscar-nominated Julie Walters and Hotel Rwanda’s Sophie Okonedo, Jessie displays her considerable musical and dramatic talent as Rose-Lynn Harlan in this inspiring, infectiously joyous heart warmer, where Rose-Lynn dreams of getting out of Glasgow and emulating the country singers she idolises by making it as a singer in Nashville, but life decisions and circumstances soon find her facing what she perceives as a choice between family and stardom.

Other high profile guests to walk the red carpet at the Festival include Josh Hartnett (Pearl Harbour), Lucy Fry (Wolf Creek) and Eiza Gonzalez (Baby Driver) who visit for the world premiere of She’s Missing. The drama thriller by Irish writer and director Alexandra McGuinness is about a young woman, Heidi, whose best friend goes missing at a rodeo after meeting a mysterious man. She sets out across the desert, unveiling astonishing secrets and encountering the unexpected violence of life on the road.

Speaking about the Virgin Media Dublin International Film Festival 2019 programme, Grainne Humphreys, Festival Director said: “As well as celebrating the best of Irish film talent, the programme for this year’s festival once again features a global line-up including world premieres and visits from the industry’s best known stars. We’ve found some fantastic titles for this year and we’re looking forward to sharing these discoveries.

"Whether it’s feature films, documentaries exploring topical themes or a celebration of Charlie Chaplin’s iconic The Kid, the 2019 Virgin Media Dublin International Film Festival definitely celebrates the love Irish people have for cinema and those who make it. We're delighted to be working with Virgin Media as the festival’s title sponsor for three years too. They’re known for their association with the best movies and television content as Ireland’s leading connected internet provider and our partnership will allow us to bring some of the world's most exciting cinema to a wider audience.”

As always, Virgin Media DIFF supports established and emerging home-grown talent and the programme is packed with a terrific line-up of new Irish features. Neil Jordan’s Greta, a psychological thriller about a lonely, mysterious widow whose friendship with a naïve young woman becomes increasingly disturbing. The film stars Kick-Ass’ Chloë Grace Moretz alongside César Award-winning French actress Isabelle Huppert whose performance is described as a dark, delicious treat; while Dark Lies The Island, written by Irish author Kevin Barry and starring some of our best acting talent including Pat Shortt, Charlie Murphy, Tommy Tiernan and Moe Dunford is a pitch-black comedy centring on a small Irish town over a week-long period.

According to Senior Brand and Communications Manager of Virgin Media Niamh O’Driscoll,  “The Virgin Media Dublin International Film Festival programme is designed to be diverse, exciting and a meeting point between audiences, critics, talent and industry. We’re thrilled to be associated with such a prestigious event, and underlines our commitment to foster creativity in film production and television content as Ireland’s leading connected entertainment provider and commercial broadcasting company. Dublin will once again become a global showcase for the best films and talent. We want this to be a signal to the world of everything Ireland has to offer as a film industry hub and where we are also focused on encouraging home produced content for our own TV channels and services.”

Audiences’ continued love of documentaries is reflected in the 2019 programme. Maiden is the critically acclaimed sailing documentary centring on the first ever all-female crew to enter the Whitbread Round the World Race in 1989 skippered by Tracy Edwards and also featuring Irish woman Angela Heath on the crew. Irish produced Shooting the Mafia is Kim Longinotto’s powerful documentary, through the eyes and lens of photographer Letizia Battaglia, which strips back the glamorous image of the Sicilian Mafia, showing the harsh reality of life, death and business at the hands of those who wield it. Virgin Media DIFF also hosts the world premiere of Land Without God is a deeply personal documentary which movingly centres on Mannix Flynn and his family as they recall the effects of decades of institutional abuse, and the impact it had, and continues to have, on their lives.

This year’s shorts programme includes some exciting titles, including Psychic, the directorial debut by one of Irish cinema’s most respected actors, Brendan Gleeson, about a charismatic psychic and his two manipulative sons who are gaining a cult following, played by his real-life sons Domhnall and Brian. Oscar long listed and BAFTA nominated Wren Boys is the story of a Catholic priest from Cork who drives his nephew to prison to marry a maverick gay inmate on a bleak Stephen’s Day; while War Paint, written by and starring Yasmine Akram, who previously starred in TV’s Sherlock, is the dark story of an enigmatic narcissist who befriends a despondent loner from her book club and drags her on a gruesome misadventure.

The Inspirations Strand of the festival features movies chosen by some of Ireland’s best loved authors, including Tana French who selects Picnic At A Hanging Rock, Peter Weir’s 1975 classic, widely acclaimed for its sense of mystery, sexual fear and hysteria, stunning cinematography and cultural undertones; Liz Nugent has chosen Perfume: The Story of a Murderer starring Ben Whishaw as a perfumier who uses the scents most evocative to him to create his unique fragrances; and Sinead Gleeson picks Stanley Kubrick’s cult horror The Shining starring Jack Nicholson.

Awards to be won 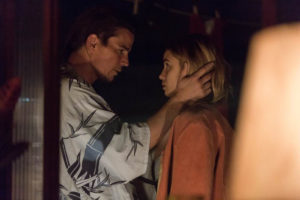 Filmgoers will also have the chance select the Virgin Media Audience Award, their favourite film from the programme. Other awards include best Documentary and Short.

The Fantastic Flix strand of the festival for mini movie fans marks the 40th anniversary of one of pop culture’s most iconic movies, The Muppet Movie, and also celebrates difference and diversity in film with highlights including Rosie & Moussa which looks at embracing multiculturalism; Kenyan film Rafiki, a gorgeous LGBT film which shows how love can bloom even in difficult circumstances; and a visit to Dublin by Bo Burnham for the Irish premiere of his new movie Eighth Grade.

The Surprise Film continues to be one of the most popular events in the Virgin Media DIFF programme but, as always, its identity remains a tightly-guarded secret known only to the Festival Director. Another exciting event from the Festival’s Creative Catalyst series, which recognises the passionate advocates who are changing what we see on screen, is Sean Bailey in Conversation with Eoin Colfer and sees the author of the Artemis Fowl series chat with the President of Walt Disney Studios Motion Picture Production. A 25-year industry veteran, Bailey’s feature film producing credits include Disney’s Tron: Legacy and Miramax’s Gone, Baby, Gone.

The Festival is known for setting the agenda of the year with its programme of outstanding Irish and international film. This week saw the announcement of the 2019 Oscar nominations with a number of titles which will be shown at the Festival receiving nods. Element Pictures’ The Favourite, which had a special preview with Director Yorgos Lanthimos at the Virgin Media Dublin International Film Festival in November, received ten nominations; Talal Derki’s Of Fathers and Sons, nominated for Documentary (Feature), centres on a radical Islamist family and their harsh existence as war rages around them in Syria; and from the shorts programme, Mother and Detainment were both nominated in the Short Film (Live Action) category. From last year’s programme Paul Schrader, who also visited the festival, is nominated in the Writing (Original Screenplay) category for First Reformed.

Previously announced events include An Evening With David Shire, a career retrospective interview with the Academy Award and two-time Grammy winning composer hosted by Aedín Gormley from RTÉ Lyric FM’s Movies and Musicals; and the Irish premiere of Australian comedy drama The Merger, which will also tour to six other Irish venues around the country.

Groundbreaking new series The Third Day will be world's first immersive TV drama with special live event
Cast announced for world premiere of Maeve Binchy's Circle of Friends
WATCH: Wes Anderson's new film starring Saoirse Ronan, 'The French Dispatch,' gets first trailer
Winners react to the results of last night's IMRO Live Music Venue Awards
Track of the Day: Madison Front – Sleep Off
BIMM Institute Dublin launches 'The Sinead O'Connor Scholarship'
We use cookies to ensure you get the best experience on our web site - by using this web site you consent to our use of cookies. Read more »