The musician joined the Dublin folk-rock band in 1985, remaining an active member on and off until 1998. Barnes played in Gavin Friday’s band around 1988-89, playing gigs in Ireland. Leo also appeared on albums by Michelle Shocked, Two Way Street and Shane Howard. 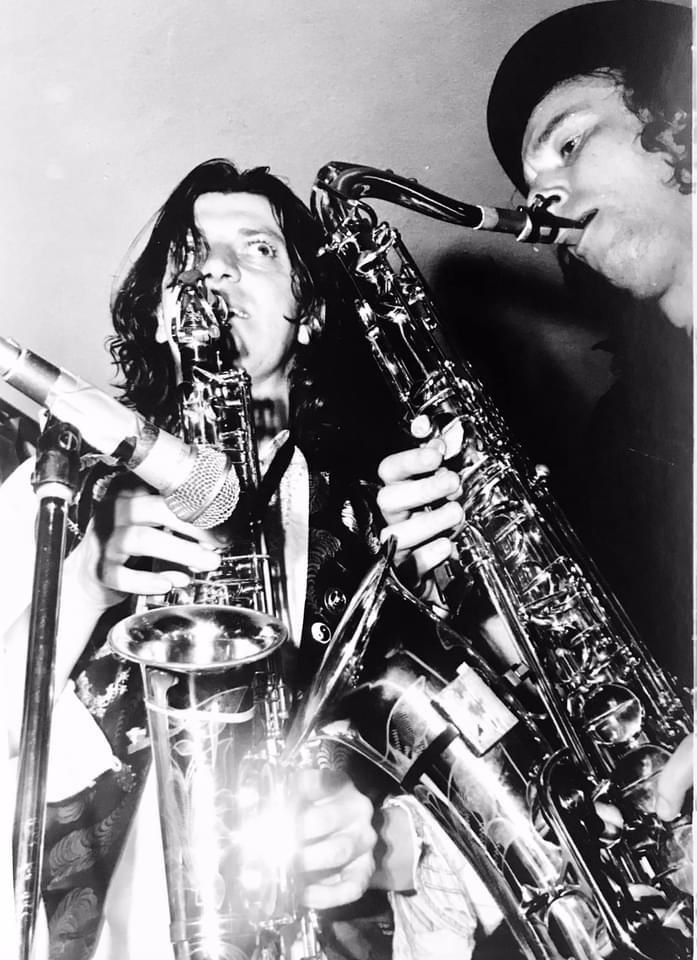 Leo Barnes on stage with Anto Thistlethwaite of The Waterboys, during an 1989 Mary Stokes Band gig at the Wexford Inn.

Hothouse Flowers formed that same year when Liam Ó Maonlaí and Fiachna Ó Braonáin (who had known each other from their school days in Coláiste Eoin) began performing as buskers on the streets of Dublin, calling themselves The Incomparable Benzini Brothers.

They were later joined by Peter O’Toole, and had won a street-entertainer award within a year. They renamed the group Hothouse Flowers (suggested by singer Maria Doyle Kennedy at the Trinity College Arts Block cafe) and began writing songs and performing throughout Ireland. Rolling Stone even called them “the best unsigned band in Europe". Their ranks then further swelled with the arrival of first Leo Barnes and Jerry Fehily followed by Wayne Sheehy, Rob Malone and Dave Clarke.

Leo was brought up as a child in the notorious Artane Industrial School and became a prominent member of the Artane Boys Band, which also provided a musical springboard for Larry Mullen. He then joined the armed forces and became a member of the Army Band whilst at the same time moonlighting on the local Dublin circuit.

Every note he played took my breath away….

My teenage years were all about Hothouse Flowers💜I first saw them in '88 at RDS, bought all the records, went to the gigs, joined the fan club, talked about them A LOT. I still have 2 scrapbooks filled with newspaper articles & interviews.
RIP Leo Barneshttps://t.co/NYXQqJRsC8 pic.twitter.com/xAG8B5EV8j

Sincere condolences to all of you, everyone who knew Leo, and those who loved his musicianship. Cherish your memories, I know I will 💛

This gig was my first time seeing @hothouseflowers perform. Cork Jazz 1986. The sax playing by Leo Barnes was the standout of their set. Ar dheis Dé go raibh a anam pic.twitter.com/vqpyNrg3bI

Sorry to hear about #LeoBarnes from @hothouseflowers passing away. Such an integral part of the sound. https://t.co/zGIYJaAZ6O

In 1986 Bono saw the Flowers performing on television and offered his support. They released their first single, 'Love Don’t Work This Way' on U2′s Mother Records label, which led to a deal with the PolyGram subsidiary London Records.

Debut album People was released in May 1988, and was the most successful debut album in Irish history. It reached the No.1 slot in Ireland within a week and eventually reached No.2 in the UK Albums Chart. The group’s sophomore album, Home was released in June 1990. It was recorded sporadically during extensive touring. Sessions took place in Dublin, London, a rented house in Carlow, and one day of work with Daniel Lanois in New Orleans, while Bob Dylan was taking a break from his Lanois sessions.

The album may not have made the same waves in Ireland and the UK as People, but it went No.1 in Australia. 'Give It Up' and Johnny Nash cover 'I Can See Clearly Now' both landed in the UK Top 30 Singles Chart.

Songs From the Rain was released in March 1993. Worldwide sales did not meet label expectations, despite positive reviews and Irish and Australian chart positions. The record label and the band’s management kept the group on the road almost continuously for the entire year. By early 1994, Ó Maonlaí decided that the group was suffering from physical, mental and creative exhaustion, and he called for a year-long sabbatical.

The year-long break turned into several years, as the band members recouped their energy and experienced changes in their personal lives, including divorces, marriages, the birth of children and the death of Ó Maonlaí’s father. The group also split from their long-time manager, and Leo Barnes (saxophone) and Jerry Fehily (drum kit) left the group.

In May 1998 they released Born. By 1999 they had reached the end of their contract with London Records, and both the label and the band decided not to renew. Sheehy and Malone left the group shortly after the release of the record. Dave Clarke joined on drums and O’Toole returned to the bass. In February 2004 the band released their latest album, Into Your Heart, produced by the band and John Reynolds. 'Your Love Goes On' reached No.3 on the Irish charts, as did the album.

2020 saw the release of Let's Do This Thing, following 2006's The Platinum Collection hits compilation.

Bono opens up about discovering his half-brother in 2000: "I’m at peace with it"
U2's Bono and The Edge in talks to compose music for Jim Sheridan's semi-autobiographical film
On this day in 1998: U2, Ash, John Hume and David Trimble took part in the historic Good Friday Agreement gig in Belfast

WATCH: Bono reads an extract from his upcoming book SURRENDER: 40 Songs, One Story
€9.1 billion in pledges secured following #StandUpForUkraine campaign, featuring U2 & more artists
Franz Ferdinand: "I’d been obsessing over David Bowie all my life, and there he suddenly was in our dressing-room"
Liam Gallagher says U2 are "too boring" to be considered rock 'n' roll
U2's Bono to be awarded Fulbright Prize for International Understanding at ceremony later this month
U2 scripted Netflix series alongside JJ Abrams in 'early development stages'