The Mary Wallopers: "At the core of it, we don’t like being told what to do"
Credit: Sorcha Frances Ryder

As The Mary Wallopers release their long-awaited self-titled debut album, brothers Charles and Andrew Hendy get vocal about the Church, the border, the roots of their rowdiness, and capturing their famed live energy in the studio.

“I’m a man of leisure,” says Charles Hendy, currently wrapped up in a white dressing gown on my laptop screen, Zooming in via-the patchy reception of rural West Cork. “There’s a jacuzzi here and everything.”

His younger brother, and fellow Mary Walloper, Andrew joins us from the slightly less leisurely setting of a car pulled in on the side of the road – which is a much more apt representation of a ballad group who have spent these past few years zig-zagging across the country, in their superheroic pursuit of justice, craic, stout and songs.

The endearingly defiant spirit that they bring to Irish folk music has been evident since the first time I saw The Mary Wallopers live, playing a support slot in Dublin in late 2018. Around that time, however, the Dundalk brothers’ primary focus was their hip-hop group, TPM, famed for their viral hit, ‘All The Boys On The Dole’ and their diss-track aimed at the national broadcaster, ‘Fuck RTÉ’.

But by 2020, it was The Mary Wallopers – made up of the Hendys and their friend Sean McKenna – that had found an even bigger audience than TPM, particularly following the unprecedented success of their lockdown livestreams. Boasting the same punk ethos and enterprising, DIY spirit as TPM, The Mary Wallopers continued to build on that momentum, selling out Vicar Street earlier this year before they’d even released their debut album.

Now that self-titled debut album is finally here, and alongside their recently expanded live line-up, they’ve embarked on a major Ireland and UK tour – including a headline gig at the National Stadium in Dublin.

Embracing a much bigger, full-bodied sound than their 2019 EP, A Mouthful Of The Mary Wallopers, their self-titled debut was recorded in Dublin with Chris Barry. The producer, who’s previously worked with Maija Sofia, Junior Brother and Myles Manley, was key to helping recreate their raw live energy in the studio.

“He’s fucking great, and great craic,” Andrew says. “The atmosphere is so good when you’re recording with Chris. And when you’re having fun, it’s easier to relax and do something really live like that.

“Our biggest strength is definitely the live gigs,” he continues. “Even with TPM, the way we’ve learned music is just by doing gigs all the time. We’re actually not that used to recording, especially with The Mary Wallopers. But I think we captured our live energy – and the rowdiness – on this album.”

That inherent rowdiness is something that has always come naturally to the Hendys.

“I think it was just the way we grew up with our parents,” Charles considers. “Our father was very anti-authority, and I suppose our brothers and sisters were too. In school and everything, we were anti-authority as well. It’s no sweat off our backs to challenge stuff.

“At the core of it, we don’t like being told what to do,” he smiles. “And sometimes, we’d cut off our nose to spite our face a little bit.”

The alignment of folk music and social movements is nothing new, but in Ireland today, there’s arguably no other genre of music that’s taking such a solid anti-establishment stance.

“That’s why we added a verse to ‘The Frost Is All Over’ about landlords,” Andrew grins. “It’s worth saying it, and it’s worth subtly adding it into songs. We need more of that.”

The Mary Wallopers also found themselves in the eye of the storm of KNEECAP’s recent mural controversy. At the hip-hop trio’s invitation, the Dundalk group played a session at West Belfast’s Hawthorn Bar in August, to celebrate the unveiling of KNEECAP’s new mural, which depicted a PSNI Land Rover in flames.

“All the loyalists got angry at us,” Charles recalls. “I tell you one thing: they’re always angry about fucking something! So it didn’t really worry us too much. And we love the KNEECAP boys, they’re lovely fellas. Dotes.”

It wasn’t their first experience of online backlash either. The Hendys attracted the ire of the far-right after staging a parody protest, complete with tinfoil hats, in Dundalk in 2020 – to coincide with Gemma O’Doherty’s own protest against Covid-19 restrictions at the same location.

“We’ve only really got backlash if we were doing anti-racist things, or anti-fascist things,” Charles reflects. “They’d all send us death threats and stuff.”

“Sometimes, if we say something political, people will comment under it and go, ‘Why is music so political nowadays?’” Andrew laughs. “As far as we’re concerned, music should be, number one, political. Especially folk music.”

As such, they weren’t afraid to wade into the frenzy surrounding the Irish women’s football team singing ‘Celtic Symphony’ following their historic World Cup qualifier, posting on Twitter at the time: “They don’t need to apologise for anything.”

“I felt so sorry for that player [Chloe Mustaki] who had to apologise on Sky Sports,” Charles tells me. “And that fella saying, ‘Do you think more education is needed about these sorts of things?’ Fair play to her, she said, ‘No, there’s not.’ He’s the one who needs to get educated.”

Charles also reckons that “there were elements of misogyny” in the response to the controversy: “If that was the men’s team, I don’t think it would have been the same,” he says.

“The reporter wouldn’t have been like, ‘Now, do you think maybe you should educate yourself?’” adds Andrew.

“What a condescending cunt,” smirks Charles, shaking his head.

As Andrew points out, a strong generational divide has emerged regarding attitudes to Irish history, and how that past continues to play out today.

“Our generation are a lot more proud of being Irish, and are a lot more outspoken about the situation with the border and all that,” he asserts. “I think older generations in Ireland experienced a really strong media that was manipulated by the British Empire. Our generation are able to look at the Troubles in a more open way, and are able to see all the collusion that was happening, and all the interference from MI5. And that’s making people go, ‘We want a 32-county republic.’

“Every few months there’s something else happening – like The Wolfe Tones going into the charts,” he continues. “There’s a pulse in the country, of people being like, ‘No, actually, the Brits have done loads of bad things over the last hundreds of years.’ And it’s okay to say that. Whereas I feel like our parents’ would be like, ‘Oh Jesus, now you can’t be talking about the English like that! That’s all in the past!’ But it’s not all in the past.”

Having grown up close to the border with the North, it’s a subject the Hendys are well familiar with.

“The border is nearly like the Iron Curtain for Irish people,” Andrew notes. “Even some people in Dundalk never go up North. They always go towards Dublin but Dundalk is halfway between Dublin and Belfast.

“I was talking to someone a week or two ago,” he adds. “He was from Clare, in his 40s or 50s, and he said to me, ‘I think we should have a united Ireland but we’re not ready for it yet.’ I said to him, ‘Have you ever been to the North?’ And he was like, ‘No.’ I said, ‘You should spend a weekend in Belfast. Just go there and have the craic. It’s a lovely place!’”

“Well,” Charles interjects. “Dundalk is actually the best place in the world.”

Dundalk, where The Mary Wallopers are still based, has certainly produced more than its fair share of musical talent, including the Hendys’ major influence Jinx Lennon, as well as Just Mustard, David Keenan, Æ Mak, Elephant and Negro Impacto, to name a few. And it’s not the only Co. Louth town that’s currently bringing the local scene to the world stage – with Drogheda drill collective A92 also making major waves.

“It’s class, that scene, and what they’re doing,” Andrew enthuses. “A92 are probably one of our favourite groups in the country at the minute.” 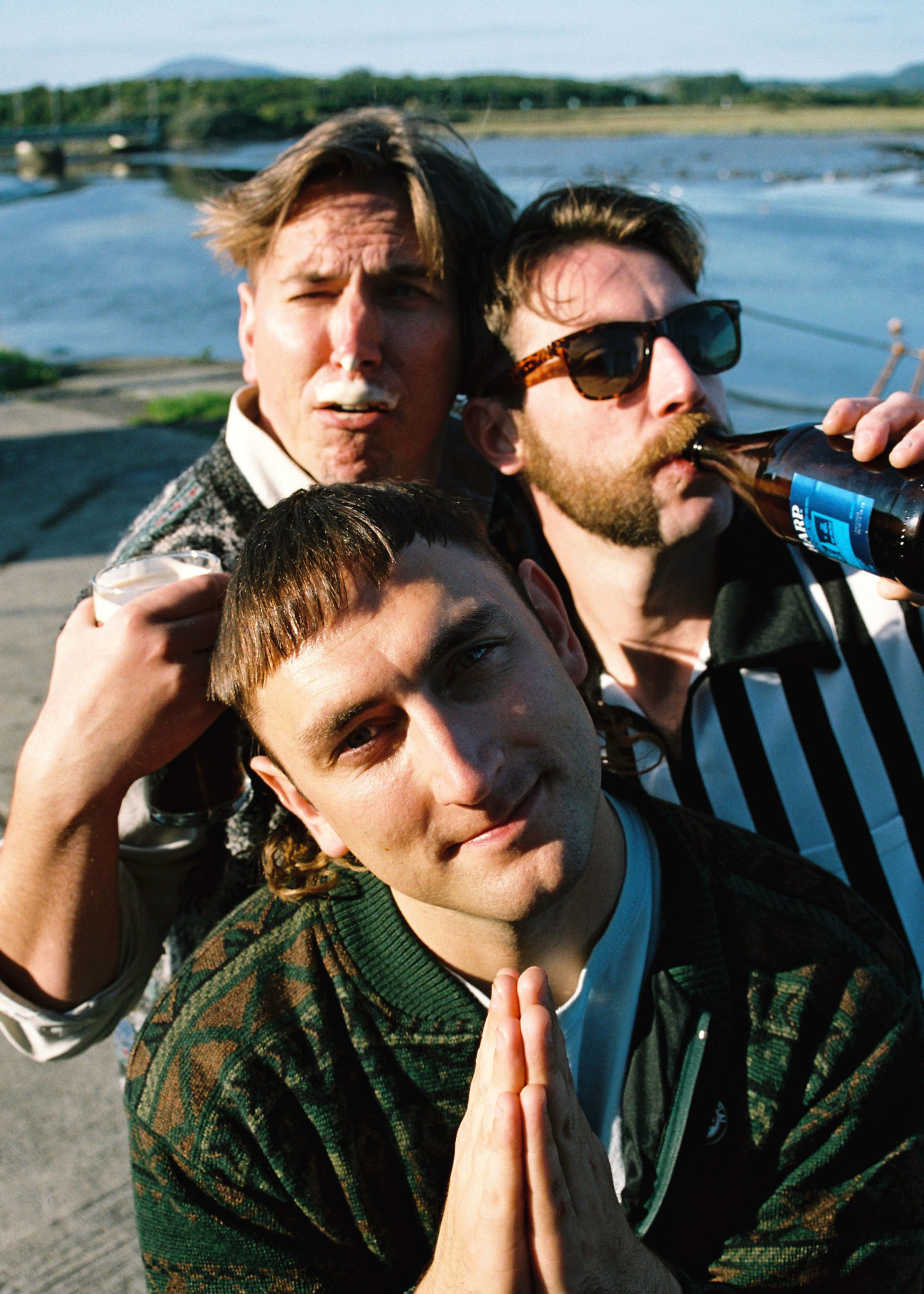 While there’s no crossover between the hip-hop elements of TPM and the collected folk songs that appear on The Mary Wallopers, the ballad group tell me that they have new original songs in the pipeline, which “won’t be that dissimilar to the topics of TPM songs.”

“We actually recorded some demos that were originals already, so we’re definitely moving in that direction,” Andrew says. “It’s all about sneaking our agenda into our music!”

“Yes, we’re brainwashing people,” Charles deadpans. “Over the next while, there’s going to be a lot more originals in our set. But we just want to make sure that we’re happy with them.

The Church, and the horrific legacy of its abuses in Ireland, is a topic the Hendys are particularly passionate about addressing.

“We’ve known about the evils of the Church our whole lives,” says Andrew. “Our father was Protestant and our mother was Catholic. Our sister was stolen by the Catholic Church and we don’t know whether she’s alive or dead.”

Given that tragic aspect of their family’s history, The Mary Wallopers’ participation in last year’s Breaking The Silence event – live-streamed from the National Concert Hall in the wake of the Commission on Mother and Baby Homes report – was especially powerful. Onstage ahead of their performance, Charles explained how, shortly after their sister’s birth in the ‘70s, their parents were told that she had died, though they were never allowed to see her. They spent the subsequent years looking for answers, with their father always believing that his daughter was still alive.

“We were lucky enough that we didn’t go to church growing up,” Andrew tells me. “It’s funny how people still cling onto ideas of being Catholic or Protestant so much – like it’s a good thing.”

“We absolutely and wholeheartedly despise the Church,” Charles adds. “After all the Catholic Church did to this country, I feel priests should be afraid to walk around the streets. The evils that they committed are unimaginable.”

“Even from a republican standpoint, I think a united Ireland will never happen until the Church – the Catholic Church and the Protestant Church – is totally disbanded,” Andrew resumes. “They’ve so much power around the country and they shouldn’t have it. And they shouldn’t own all the schools. They’re stinky heads and we hate them!”

Coming from that socially-conscious standpoint, The Mary Wallopers are well aware, as they take their music overseas, of how perceptions of Irish music can be wrapped up in stereotypes and misrepresentations.

“It’s important for us to be responsible with the idea of what Irish music is in other countries,” Andrew states. “We don’t want to be doing, ‘Yeah, we’re the fighting Irish!’”

“We’re just going to be honest,” Charles muses. “As we always are. What will surprise people that are maybe used to the more naff interpretations of Irish music is the edge of it – or the cursing even! It’s all just about being honest.”

Meltybrains?: "It's a bunch of people who are very very good at what they do, but who are innately messes"
Nicola Coughlan cast in Sam Mendes' Oliver Twist Audible series
In the new issue: Dermot Kennedy stars on the cover of our special festive edition
Panti Bliss, Mary Lou McDonald and more to appear on The Late Late Show
Creative Europe: Funding A New Generation Of Irish Culture
Mad Hatter Q&A - Gearóid Farrelly: "My jeans falling down when I walked off stage at Edinburgh was pretty embarrassing"