The Canal: Last Refuge of the Young and Broke in Dublin
Matthew Tallon. Copyright Miguel Ruiz.

The closing down of Portobello Plaza – one of the last remaining places young Dublin people could meet outdoors during lockdown – again highlights how the capital has failed its younger citizens.

If you are fortunate enough to afford to live in Dublin South-East, you may have noticed something over the past few months. Let's say you go down to the Grand Canal. Maybe you're on an evening jog, or clearing your head between Zoom meetings at your high-pressure business job. On this trip, if you glance up from checking your heart rate on your Apple watch, or Instagramming a croissant, you will see, to your horror, that the place has been overrun by Youths. Students, shift workers, drunk teenagers and skateboarders: basically everybody under 26 who doesn't work in finance is there.

At this point you may be thinking: how did this happen? How did this panoply of vagrants and undesirables, who don't even know the meaning of low equity margins, end up in my neighbourhood? Why is the canal, an idyllic staple of LovinDublin city, suddenly filled with freaks and losers?

Hi, I'm Matthew, freak and/or loser. I am here to address your concerns and explain the situation.

In the gaps between lockdowns, places along the canal bank, notably Portobello Harbour, have been periodically flooded with young people, engaging in what Dublin City Council and certain facets of the media have dubbed '"anti-social behaviour": this is referring to an amount of littering, urinating and occasionally defecating – things which usually take place indoors. This phenomenon culminated in the sudden appearance of a huge, Garda-patrolled fence around Portobello Plaza. Problem solved! The fence keeps out the bad element and lets D8 to return to what it always was: a beautiful, serene, stately place with a giant hideous fence in the middle of it.

In all the discourse around the fence, however, not a lot has been said about why everyone was there in the first place. The tacit assumption is that gathering in hordes to get wasted, littering and defecating in the street is just the kind of thing kids like to do. This is untrue. Well, okay, it might be true, but it isn't the problem here.

Believe it or not, the recent influx of people to hang out at Portobello Plaza is not because we love it so much. Truth be told, the canal is kind of a bad place to hang out. It isn't very central. The benches are too small. And let's face it: unless you're especially interested in the history of domestic trade routes, a canal is essentially just a lame river.

No. The reason that young people hang around the canal is, quite simply, because we have nowhere else to go.

It is obvious to anybody living in Dublin, during the past decade, that the Council and An Bord Pleanála get their construction philosophy from the board game Monopoly: houses are fine, but hotels are way better. This attitude has led to the steady erosion of public spaces and the indomitable construction of corporate and commercial buildings. Gin bars arise, open squares crumble. With most of these commercial spaces closed, town revealed itself as the claustrophobic and alienating metropolis it has long been becoming.

Every time you try to meet a few people, it's the same question: "Where can we go?"

The parks all close in the evenings. If you try to sit down anywhere, the Gardaí come along within a couple of minutes and tell you to move. The idea of one of you having a garden is borderline science-fiction. You spend a few minutes wandering aimlessly, but eventually the same reserved look settles on you and your friends' faces, and you start the trek up to Portobello.

The Grand Canal is the only place for us. It's the last refuge of dislocated youth. And the only reason that it's still there is because the Council can't physically remove a major body of water to make space for a hotel – yet. Who knows? Maybe in a few years, we'll all waken up to find the whole thing filled with concrete to make room for a really trendy canal-themed bar/restaurant.

While Covid is obviously a major catalyst to this dearth of non-canal centred amenities, the worst mistake one could make is to treat it as a short-term thing that will resolve itself once the pubs and restaurants re-open. Unfortunately, this is precisely the attitude the DCC have demonstrated with their fences. In reality, there is a far deeper problem, which affects the vast majority of twentysomethings (and increasingly thirtysomethings). It existed long before Covid, and will keep getting worse after Covid's gone. At the risk of sounding corny, it is a problem of the soul. 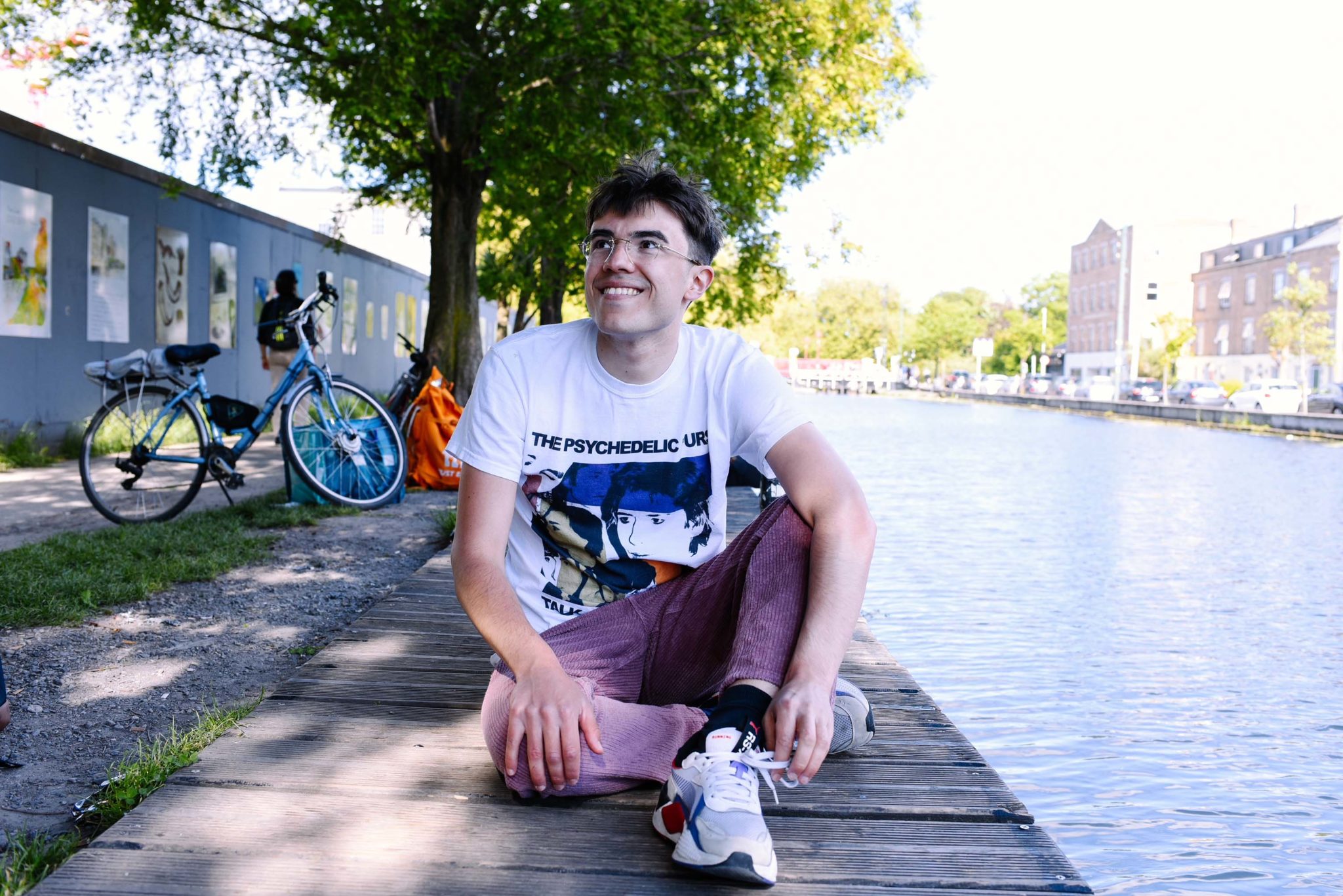 There is an intense feeling of despondency right now amongst people of my age. Renting a place to kip in is becoming increasingly bleak. We don't believe we'll ever be able to afford a home, because the vast majority of us won't. And with the passing of every month, there seem to be fewer places we're able to socialise without shilling out for €15 cocktails. Or the fear of getting baton-charged by the cops.

To make things worse, we're all so accustomed to this that it feels somehow trite to even say it. The walls are closing in on us, yet saying, "Oh hey, those walls look like they're about to crush us" is gauche.

This rising feeling of despair comes from the fact that the very space we occupy is rejecting us. Dublin is being wilfully designed to exclude anyone who doesn't have a lot of disposable income (which students and young workers famously do not). For a long time, it's felt like Dublin doesn't really want us living here. In recent times though, it's gone beyond this: now it feels like the city doesn't even want us standing there for one moment when we aren't spending money.

It's horrific to have people relieving themselves outside your doorstep. Or scrapping on the street. But can you imagine for a second how degrading it is to know that when planning the re-opening, it doesn't seem to have occurred to even one person in charge that you might at some point need to pee? That they reopened all the places to buy food and drink, encouraged you to support them, and then didn't spend a cent on extra bins or toilets?

Do you see how dehumanising that is? Dehumanising in the most literal sense: it shows that the authorities see you only as an entity that consumes, with no other human needs or desires.

A city communicates something to the people who are in it. And what our city is communicating to young people right now is that it would rather we didn't exist. We're an inconvenience. We're not buying enough, and generally getting in the way of the grown-ups conducting business.

Historically, young people are supposed to be the cool ones in culture. We decide what's in, which types of music suck, and what type of jeans people wear. It's the fake power we're given to appease us in lieu of any actual financial or political power. Now we don't get even that most pyrrhic of victories.

We've been relegated to spending our time at barges and artificial waterways, a territory traditionally held by upper-middle class dads having a midlife crisis.

Even still, we had started to make the canal a home, to make memories and have good times there. With the closure of the Plaza, it would appear that they have finally started coming after the canal, that this social space too is being designed out of existence.

Maybe this is just my youthful despondency talking, but to be honest this felt like such an inevitability it was ridiculous. Another thing that's gone unspoken in the media discourse around Portobello Plaza is that the property right next to it is being turned into a 6-storey, 178-bedroom luxury Nyx Hotel. It's hard to imagine the freaks and losers will be allowed to congregate in what will essentially be rich tourists' front garden.

We'll have to move further up the canal. Then that area will get shut down and we'll go further again. Until eventually the canal-themed bar gets built.

On the last Friday in May, I went to a protest at the bordered plaza. It was nowhere near as well attended as the social gatherings there are, which did not instil much hope. The speakers at the rally (a mix of PBP reps and locals) said they believed that the real function of the fence is to get us used to not having the plaza for when the hotel opens.

I spoke to the Lord Mayor, Hazel Chu, of the Green Party, and she insisted that the railings weren't even brought up as a possibility at council rep meetings until the day before they were erected. Whether or not there's any causal link between the hotel and the fences, the poetics of the moment are very clear. The symbolism of the main hub of one of our few social spaces being replaced by yet another tourist-baiting monolith is as heavy-handed a metaphor as one could concoct.

I hope we get the square back for now, but I can't shake the feeling that we're fighting an unwinnable battle. The walls are closing in, and my landlord just raised my rent on the closing walls that are about to crush me. The best young people can do for now is to continue to exist, loudly and angrily (without violence, obviously); to constantly remind the city that we are here. And to demand that it recognise the most basic of physical principles – that we are human beings and we take up SPACE.

“We needed to get back together and make a record for our sanity": The Specials' Horace Panter on Protest Songs 1924 – 2012
Oasis unveil live rendition of 'Some Might Say' from Knebworth documentary
Track of the day: MAIA - 'BOSS'
Liam Neeson & Catherine Corless curating film about the Tuam Babies scandal
Revisit a classic 1985 Hot Press interview with Brendan Kennelly
David Keenan to host WHAT THEN? listening party tonight on the Hot Press socials