Hot Press reviewed the second installment of SoFFT Nights which featured Soda Blonde, Maija Sofia and Callistan in what was an excellent and relaxing day out. Attendees were brought on mindfulness adventures and enjoyed the brilliant live acts on a beautiful sunny August day.

Festival revellers returned to Dunderry park on Friday, August 27th for the second edition of SoFFT Productions’ SoFFT Nights. The grounds were once again brilliantly decorated, with reused materials from the Spirit Of Folk Festival bringing colour and character to a festival that is rapidly building a reputation for itself as one of Ireland's most exciting new ventures.

SoFFT Nights was once again blessed with fantastic weather for the second edition of the new festival. Callistan, the night’s first music act, were just finishing up their sound check as festival goers ambled into the park.

This month’s festival had a different layout, that complemented the intimate nature of the event. The main stage shifted to the opposite end of the grounds so that it faced the house as opposed to sitting in front of it as it had in July.

Benches speckled the surrounding area of the Beehive stage with bouquets of flowers – handcrafted by festival organiser Natasha Duffy – set in the middle. SoFFT Nights is set apart by the little details.

Various pop-up shops for tarot card readings, handcrafted jewellery and great food lined the exterior with many of the same traders retained from July’s festival, and Igloo-like structures built by Clare McCloskey were laid in the middle of the grounds. The pieces were eye-catching in the daylight however the real show was at night, when they lit up.

The atmosphere was relaxed and open, even with the COVID-entry point being a chilled procedure. Once inside, attendees were free to remove their masks but were required to maintain a social distance.

In the Beehive tent, people were divided into their pods with white tape as opposed to the layout of chairs which were set up for Cormac Begley’s headline show. The restrictions however were second-nature for the crowd and made no impact on the enjoyment of the occasion.

Catching up with organiser Natasha Duffy, she was excited and anticipating another great event in Dunderry park. Duffy also spoke about the decision to change the layout of the festival.

“We totally changed the site around. For curating an audience of 200, we’re better off tightening it in and making it a bit more intimate. We put a lot more detail into the decor.”

The programme structure remained the same with workshops in the day and then the musical acts at night. Duffy was looking forward to the evening's acts, as was the traveling crowd.

“I’m really excited for Soda Blonde. This is gonna be one of the first times that they’re doing the album live. And with Callistan and Maija Sofia, I think it’s going to be great.”

There were also plans for the night-time once the acts had finished up. “We haven’t told anyone but tonight we’re having a big fire performance as well,” she said.

“A lot more work has been put into the lighting this time. There’s a whole design around the lake and all the trees are going to be lit up. It’s gonna be properly sparkly.”

In the Covid-compliant beehive tent, Aisling Leonard got the workshop ball rolling with her sound meditation. Using a variety of instruments, she guided attendees through the process of resetting their energy. 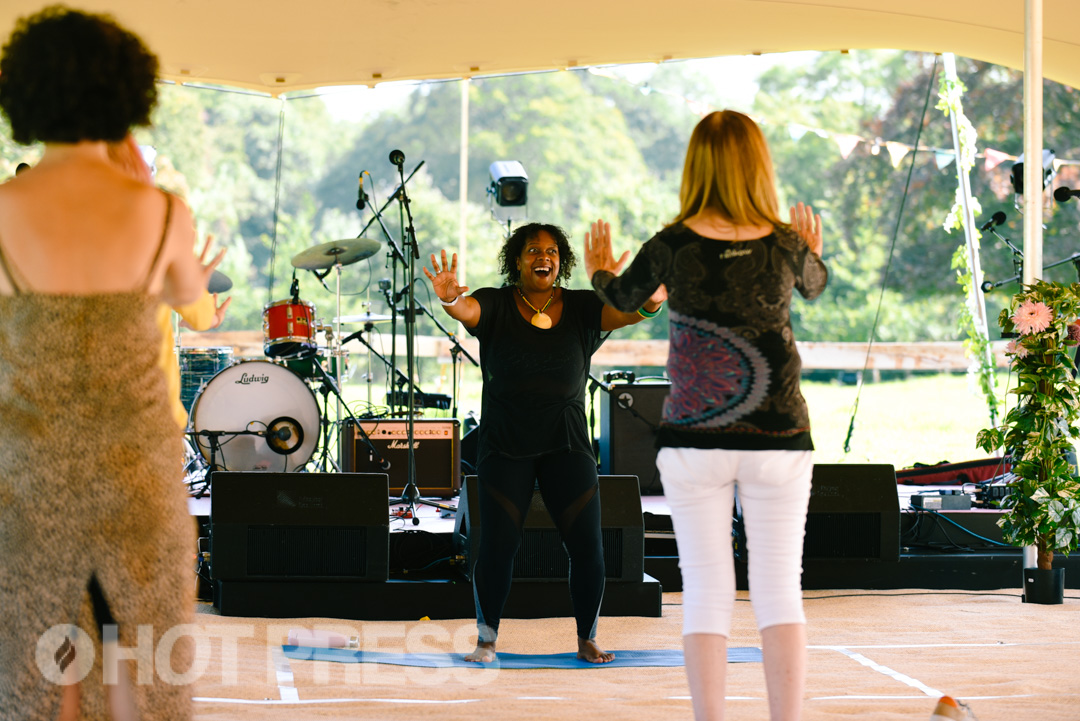 Reeta Wilson was up next with Reggae Yoga which got festival-goers bouncing about to the Reggae bangers that were blasting. Despite the workout, those who danced along came out more refreshed than when they went in.

He was burning sage to clear the energy around him as I talked to him about the work he does to help people with mental health issues.

“The idea is bringing people together and having people reconnect with themselves.”

Coffey also saw great importance in Irish mythology as part of his work. “I think it’s essential,” he said. “If you look at Youngian psychology it’s all based on myths and archetypes and in Ireland we have such a rich culture in our myths. I think it’s really important that we remember the stories.”

Conor Ruadh took to the floor shortly after Coffey’s talk on psychedelics, for his Mantra agus an Gaeilge workshop before Darren Clarke brought attendees on a meditation journey with his sound gongs down at the Badger Stand.

The sun remained high in the sky as the air grew slightly cooler. Children danced to Will Softly's DJ sets as people gathered in circles to chat and laugh in anticipation of the evening’s entertainment.

Callistan was Callistan Ahern, a singer and songwriter who was backed up with a band consisting of D. Cullen on lead guitar, Joey King on bass and Anton Shovlin on drums. Speaking to the lead singer before the gig, he was excited to get up on stage.

“I don’t know if anybody remembers Spirit Of Folk, I’m sure a lot of people do. It was an amazing festival in this very spot and now they’re kind of recreating the magic again with Sofft Nights,” he said.

The guitarist was also looking forward to listening to the other live acts as well. “I heard Maija there and caught a bit of Soda Blonde as well so it’s just gonna be a savage night.”

It was his first gig in over two years and his first outing as Callistan along with the band. He is currently working on an EP for which the songs and the album remain untitled, but the band opened the live acts brilliantly and set the tone for the evening.

“We’re gonna play some sad songs” said Callistan before launching into their first nameless number. It was a swell of a sweetly distorted guitar with the lead singer pouring the vocals out with emotion.

The band were extremely tight and were buoyed up by the strong foundation set by Anton Shovlin on drums. “I am weak and if I ever see you again it’ll be too soon,” sang Callistan in the second song which was another example of the emotional depth present in his song-writing.

Their third cut was a mellow track which exploded towards the back end with D. Cullen using a slide to eke every ounce of distortion out of his guitar. They finished with a cover of Smashing Pumpkins’ ‘1979’ before hopping off stage.

Suddenly, the stewards broke into ‘Happy Birthday’ before the crowd realised it was Callistan’s birthday. It was a touching moment as a cake was brought out for the lead singer who blew the candles out to officially end the set. 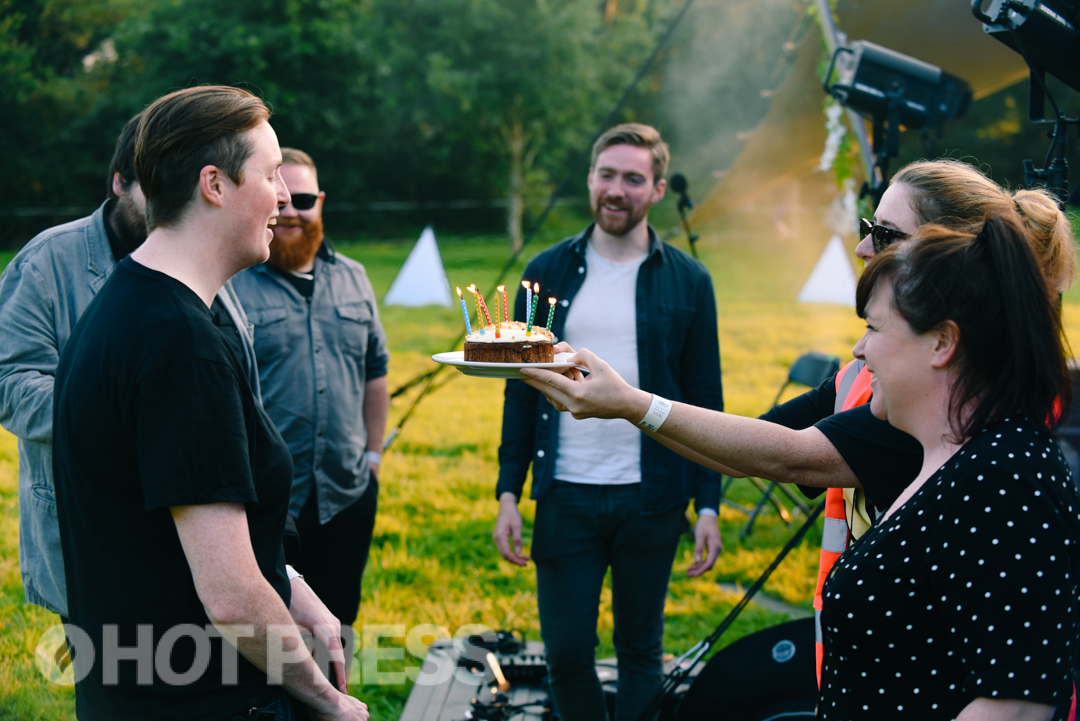 Between Callistan and Maija Sofia’s set, Will Softly played a tribute to Charlie Watts and spun The Rolling Stones’ ‘Wild Horses.’ The DJ was a late addition after Rónan Ó’Snodaigh and Laura O’Brien cancelled.

The sun was setting as the air cooled slightly and they set the stage for Maija Sofia.

The singer took the stage with harpist Maeve McKenna and opened her set with ‘Weary Night.’ Sofia entertained the audience throughout with not only her beautiful songwriting and stirring performance, but also with her stage presence.

On a number of occasions she had the crowd in stitches between songs of incredible beauty and poetic lyricism. Switching between keyboard and guitar throughout she played ‘The Glitter’ from her album Bath Time, ‘Love Is In The House' and the heart-wrenching ‘Four Winters.’ 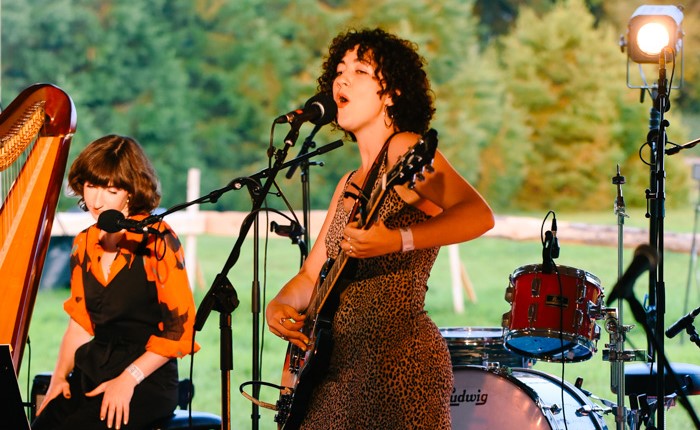 She forgot to bring copies of her latest record, “Because I’m not very good at being a businesswoman,” she said. “That’s why I write songs.”

The highlight of Sofia’s set came when she played ‘Smile Please.’ Her haunting vocals were beautiful and crisp as she delivered each impactful lyric.

Sofia described herself as a “ball of adrenaline” as she was overcome by the joy of finally playing live for a real audience. “Thank you for reminding me that this is my life,” she said before launching into her closer ‘The Wife Of Michael Cleary.’

As the night rolled in and the breeze started to bite attendees with its chill, Soda Blonde came on. Those in attendance were eagerly awaiting their fist chance to hear their new album Small Talk. They opened with ‘Tiny Darkness’ and had the crowd dancing in their Covid-friendly squares.

It was one of the band’s first gigs back and they sounded like they had hardly stopped playing together. Drummer, Dylan Lynch was rock-solid and provided some pitch-perfect vocals throughout. Faye O’Rourke brought her enigmatic stage presence to the fore and backed it up with her powerful vocals.

‘The Dark Trapeze’ was a brilliant explosion, with ethereal harmonies supplied by Adam O’Regan and Donagh Seaver-O’Leary. ‘Don’t Mind Them’ from their Terrible Hands EP followed, as O’Rourke hopped on the acoustic guitar for a brilliant song about confidence and brushing off haters.

The greatest part about the band’s set was their ability to get the sober crowd – SoFFT Nights is a dry festival – all dancing to songs that were released just over a month ago, with many singing the lyrics word for word. The band were searing through their set with the power and control indicative of their experience and skill.

There were a few familiar faces in the crowd with Harry Hudson Taylor and Stephen Byrne present to support the band. 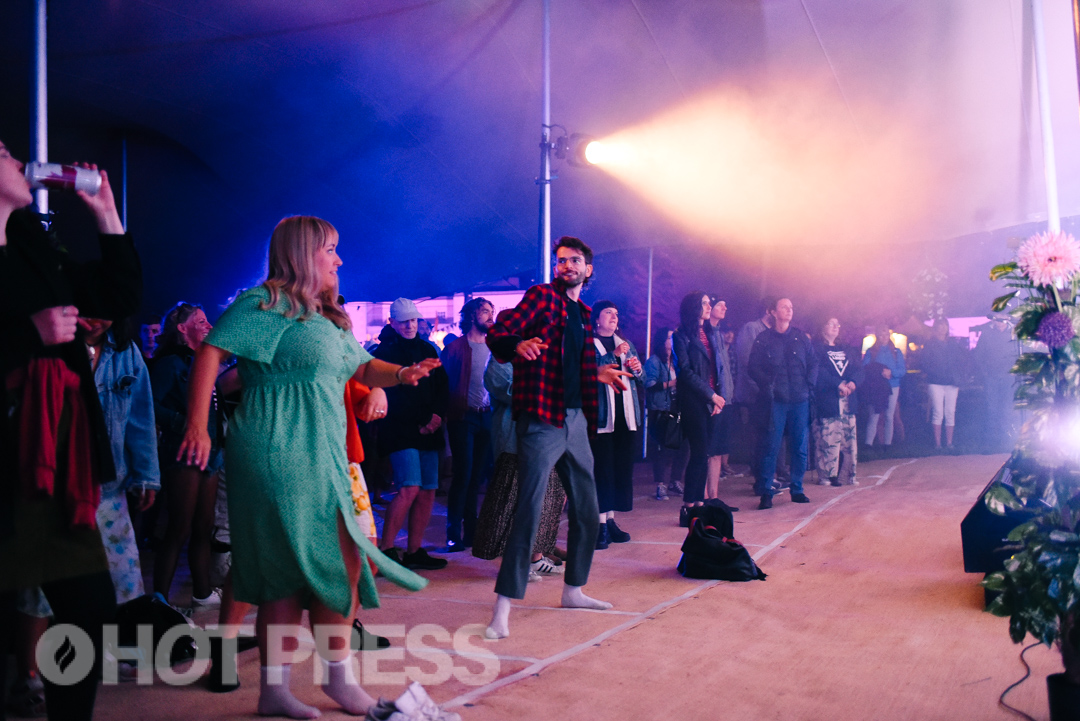 ‘Motion,’ was followed up by ‘Love Me World’ which featured a “fucking killer bass line” from Seaver-O’Leary, as described by O’Regan. And he wasn’t wrong. This track was a highlight from their set with the bass at the forefront throughout.

They took it down with ‘Perfume’ which was a beautiful example of their ability to play slower and more mellow songs. ‘Champion Of My Time’, a “vulnerable” song for O’Rourke, followed, gripping the crowd with its emotion.

The band finished with ‘Small Talk’ before they thanked the crowd and went to the side of the stage to sign records and talk to the audience. 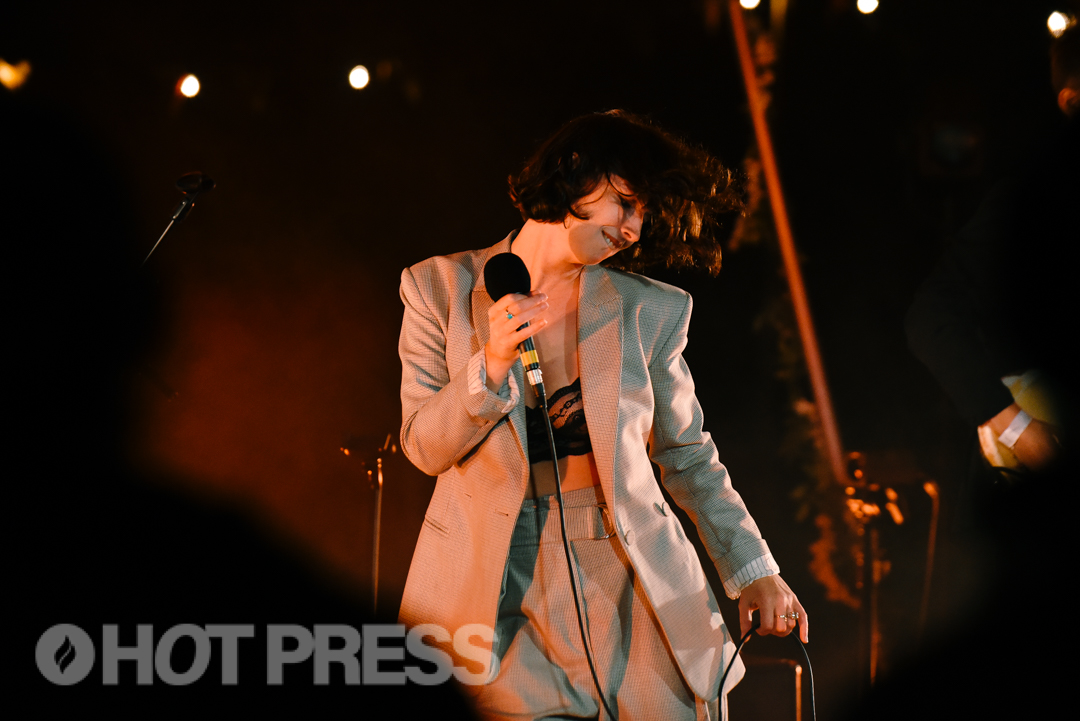 The excitement Soda Blonde stirred up remained in the air as the audience flocked around the fire show, both for the heat and the spectacle. After another brilliant festival, the SoFFT production team gear up for the third and final installment next Friday – with Pillow Queens headlining.