Sigrid: "Other Voices is the best, honestly. That night in Dingle was the most fun I’ve had in a long time"
Sigrid (pictured).

Sigrid is sitting in her label office, signing vinyls on the day her Irish promo campaign kicks off. “It’s not tiring, I love the Irish,” she beams. If I was ever in doubt, the Norwegian pop star’s recollections of her time in Dingle dispel any uncertainty.

The ‘It Gets Dark’ singer’s latest Other Voices episode aired last month, with the 25-year-old yet again captivating the church’s audience.

“Other Voices is the best time, honestly,” she enthuses. “That night was the most fun I’ve had in a long time. It was great. The first time we went to Kerry, I remember the band and I were just looking at each other like, ‘What if this is the last time we see Dingle?’ and we got really sad! I always feel the need to go back. It happened again this year where I was like, ‘This can’t be the last time I’m here’.

“Other Voices, if you see this, I’ll just show up and make it an annual occasion. It can be our thing (laughs). The show had such a good vibe. I didn’t get to do the hike I wanted on the other side of the fjord, but we did manage to get a mini, very hungover, walk in. We tried to go from pub to pub, but they were closed. We were at one that looked like a hardware store but it’s a bar? (Sounds like quite a few Irish pubs we know.)

“We ended up in the hotel lobby and I was playing the piano," Sigrid beams. "We didn’t play any of my songs, it was only The Beatles and The Killers. I have a lot of great footage of the whole town, there were probably 70 people there by the end. Everybody showed up!”

Did she listen to any Irish acts during the trip?

“Dermot Kennedy, I love his music,” she replies. “He’s so lovely as well, I was actually hanging out with his family in Dingle! They were the nicest. Someone also told me about this Irish band when I was there [hometown heroes Walking On Cars]. I must have found them because of Dingle. Their music was super catchy, very indie-pop-rock.”

With an effortlessly charismatic personality for someone who declares herself to be introverted, Sigrid is quietly confident and always authentic. She’s made a name for herself over the last five years for defiant pop anthems that take no prisoners.

Having first emerged with breakout EP Don’t Kill My Vibe in 2017, 2018’s Raw EP and 2019’s debut album Sucker Punch cemented her star status. Not to mention the gargantuan success of ‘Strangers’, produced with Martin Sjolie, which made her a bona-fide hitmaker.

In the last three years, Sigrid has kept a low profile, often staying with her parents in her hometown of Ålesund and writing her second album, How To Let Go. The Griff collaboration ‘Head on Fire’ – plus teaser singles ‘Mirror’, ‘Burning Bridges’ and ‘It Gets Dark’ –  assured fans that electro-pop anthems and defiant sincerity remain on the menu for the 25-year-old. 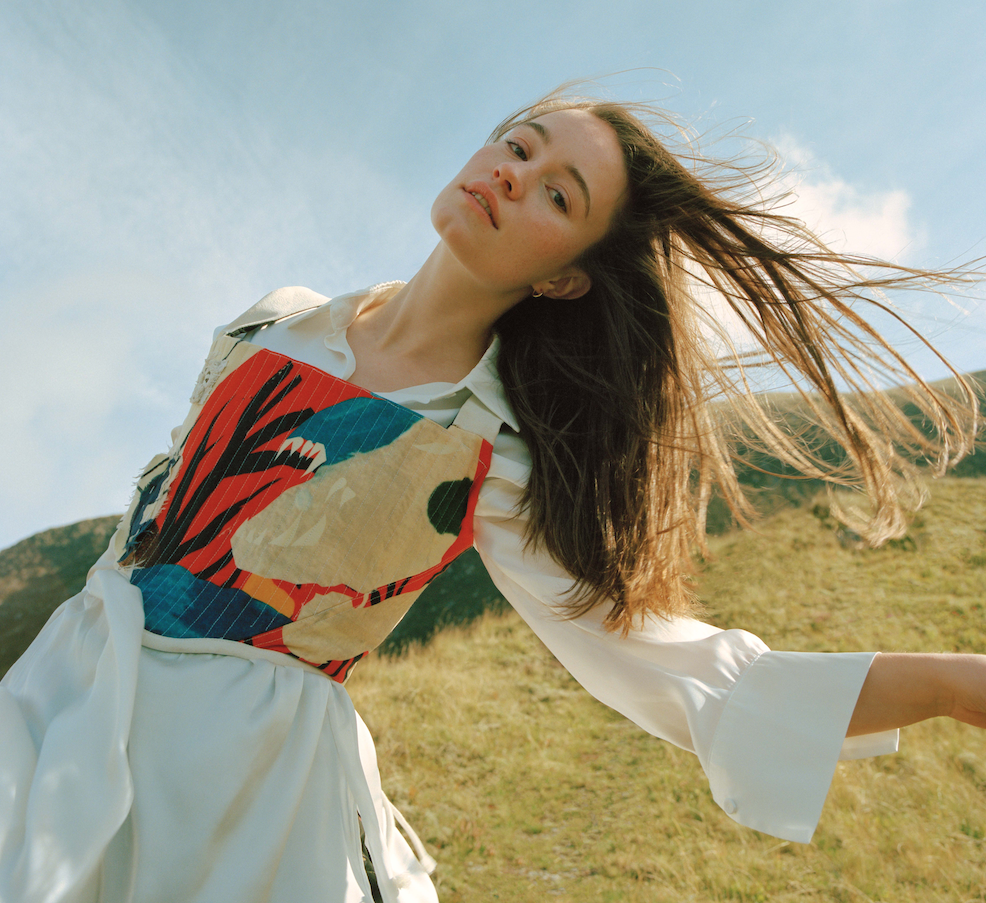 “We were, as was the rest of the world, listening to Taylor Swift’s folklore and evermore albums at the time we were writing I Can’t Let Go,” Sigrid recalls. “They were everywhere at that time. There was also a lot of Arctic Monkeys, Elton John, ABBA, Fleetwood Mac, Tame Impala, Maggie Rogers and Kacey Musgraves playing, but Coldplay are my forever inspiration. I’m a huge fan.”

The artwork sees the Scandinavian singer standing confidently atop a flashy red car in a billowing red dress, surrounded by stunning Welsh landscapes.

“We shot that in Snowdonia. I always manage to get a work trip to the mountains!” laughs Sigrid who’s an avid skier and hikes regularly.

“The label and I went to a tiny village, and it looked like something out of Harry Potter. I was just happy to be surrounded by nature. The car is a kind of continuation of the ‘Mirror’ video as well. I also feel like travel, journey and growth is a big feature of the album, so it felt natural to have a car there. To be honest, I just think I look really cool in the image.”

It’s not bragging if it’s true! I Can’t Let Go isn’t all floor-fillers and power pop, however. Equally adept at piano ballads as pop bangers, it’s often the quieter tunes that highlight Sigrid’s immense talent. The likes of ‘Thank Me Later’, ‘Last To Know’ and ‘Mistake Like You’ are emotional break-up numbers with powerful melodies.

“I try to be as respectful as possible in terms of the people I write about,” says Sigrid. “I’m the one who has chosen to be public, not the people in my life. It’s a choice you make. No one asks me in interviews, which I really appreciate as well, because I’m not going to tell anyone names. It’s important to me that I don’t say who my songs are about. I never give away timelines. I’m not a very mysterious person, what you see is what you get, so it’s important to keep some semblance of mystery for the songs.

“It’s vital as creatives to be able to feel free in our writing, because the minute that doesn’t feel like a safe space anymore, you put up a wall. You need to be comfortable talking about it in your music. I will never say who the song is about, because it’s more important to realise what the song is about.  There’s a lot of relatable stuff on I Can’t Let Go. The songs are about my life, but being an artist is part of everything I do. I don’t distinguish it – my two worlds just float in between each other. It’s also a record about being in your mid-twenties.”

‘A Driver Saved My Night’, meanwhile, has the feel of an unreleased, ‘70s ABBA track.

“That song is very much inspired by travelling,” Sigrid offers. “I’m always in a car somewhere, going from A to B. I spend a lot of time on my own, in some sort of transportation. The song is like being on a highway in London or LA and you’re having an ‘ugh’ day. Maybe you’re tired, homesick or lonely. Then a song you really like comes on the radio, and you ask the driver to turn it up a bit. And you both sit there jamming. Moments like those make me really happy, it can make my day.”

It’s hard to believe that small moments of kindness or joy are what Sigrid craves, when we list the sheer amount of ‘pinch me’ moments in her life. From winning the Sound of BBC 2018 poll, to performing at the Nobel Peace Prize ceremony, there’s plenty of highs to compete with the more mundane stuff.

“I never thought this was going to happen,” she muses. “I didn’t know what the music industry was growing up, I was so far away from it. I knew I loved making music and playing piano, it was my safe space – just playing with melodies and chords. I never, ever thought that I had what it takes to be an artist. I was very shy growing up as well. I wasn’t comfortable onstage at all. I quite often get a pinch me moment of like, ‘Oh my God, you’re doing this and you’re not freaking out!’ I’m not saying this just because it’s an Irish interview, but I truly do think of the 3Arena show a lot.”

Sigrid returns to the same venue on November 24 this year for the rescheduled show, which is sure to be a scorcher judging by her 2019 outing. The singer’s Irish fanbase is huge, as her packed-out Electric Picnic performance in 2018 first showed.

“If I’m imagining my dream place to be, I think of Glastonbury or the 3Arena in Dublin,” says Sigrid. “That was the first arena show I ever did and it wasn’t even in my home country. I’m only doing that in Norway now! The amount of love that I’ve gotten in Ireland and the UK is incredible. When I think of my happy place, it’s me onstage screaming and having the crowd scream back. Most of it is connected to live moments.

“My booking agent, as a present, gave me a picture of the 3Arena show framed. It’s in my living room – I haven’t told anyone this. I look at it whenever I’m home. It’s a really nice shot. Most of all, you see the crowd. I just remember feeling like each and every person there was having a great time. That was my impression, at least. I hope they were.”

I confirm they were, having been there on the night alongside thousands of die-hard fans.

“It was a room very much filled with love. I can’t wait to go back.”