Lucy Dacus brought the magic to the 3Olympia Theatre last night, with a fantastic supporting performance by SOAK.

The 3Olympia Theatre by design lends itself to magic — rows of seats soaring into a vaulted, ornate ceiling, whispers of its 140 year history trapped inside the meticulously decorated walls. When combined with Lucy Dacus, a spellbinding force herself, the result was an enchanting, unforgettable night of music.

The seats had been removed from the floor, making room for the hoards of fans to pack into the space. Looking from above, the rows of people looked like a sea, small waves of excited fans crashing against the main stage. For a performer like Lucy Dacus, theres a sense of majesty ahead of her shows, a slightly hushed awe that settles lightly over the space.

For fans, Dacus isn't simply an artist they like. She's a writer who doesn't shy away from the hard things, balancing bluntly candid takes on friendship, life and self worth with gorgeously crafted metaphors — all sung in her warm, comforting and honey-thick voice. For many, the deep emotionality that she infuses into her music is a sign that they're not alone. Therefore, there's a sense of camaraderie at shows like this, the audience operating not as individuals but as a collective whole.

The show began with SOAK, a Derry-based indie-artist who, armed just with their electric guitar, perfectly primed the audience for an incredible night. "I am both excited and terrified to be here," they joked, before launching into a stripped-back rendition of 'last july,' a single from earlier this year. 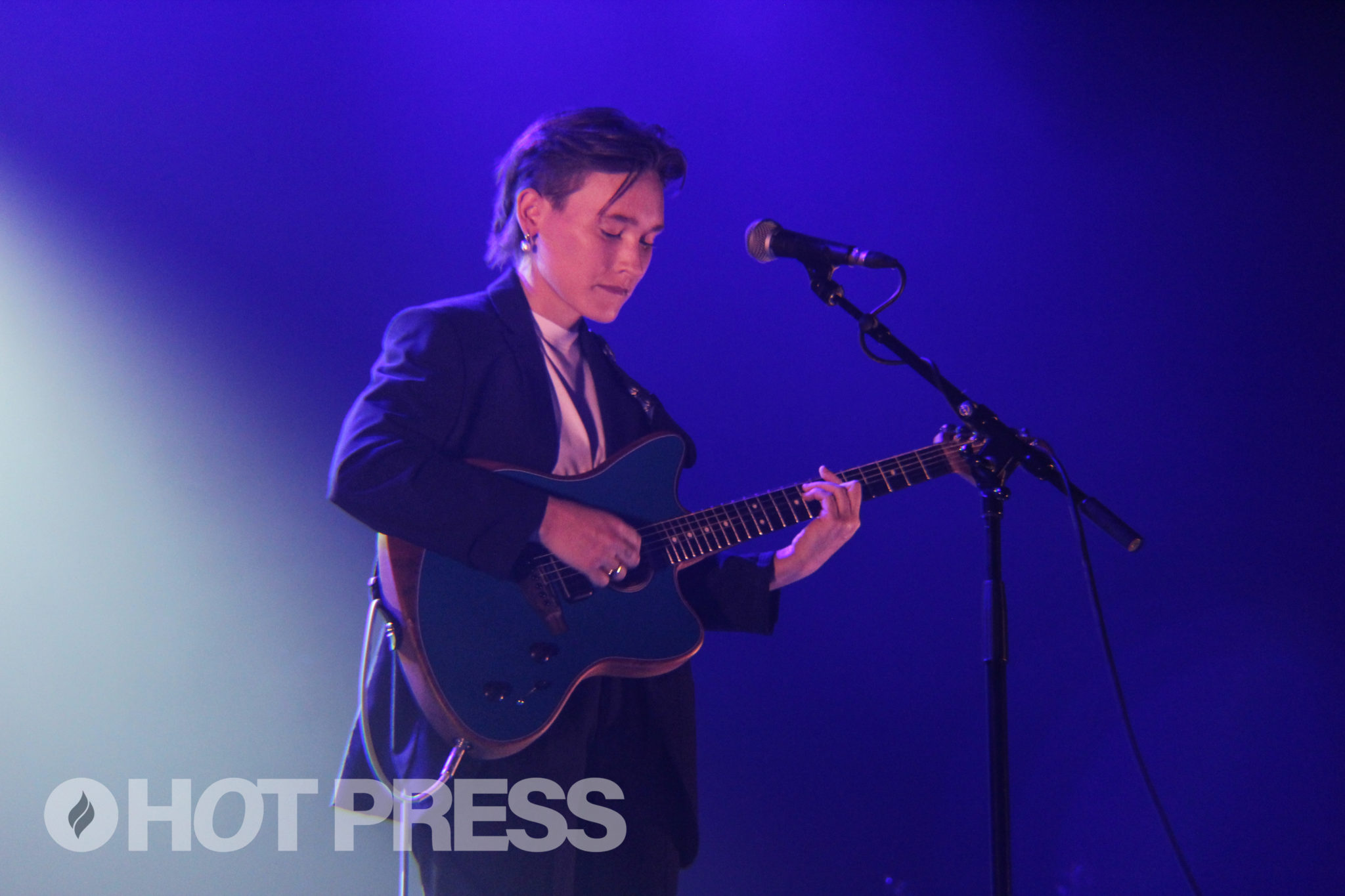 Though without a backing band, the performance still felt incredibly full. Rising and falling in step with the guitar, the punchy lyrics reached the very back rows of the theatre, voice filling the empty space with a smooth, slightly grunge tinted vocals.

After finishing their set with 'Pretzel,' SOAK thanked the audience, gathering their pedal-board to the sound of thunderous cheering. The show marks both their and Lucy's last show of tour, after they supported her for several previous performances. 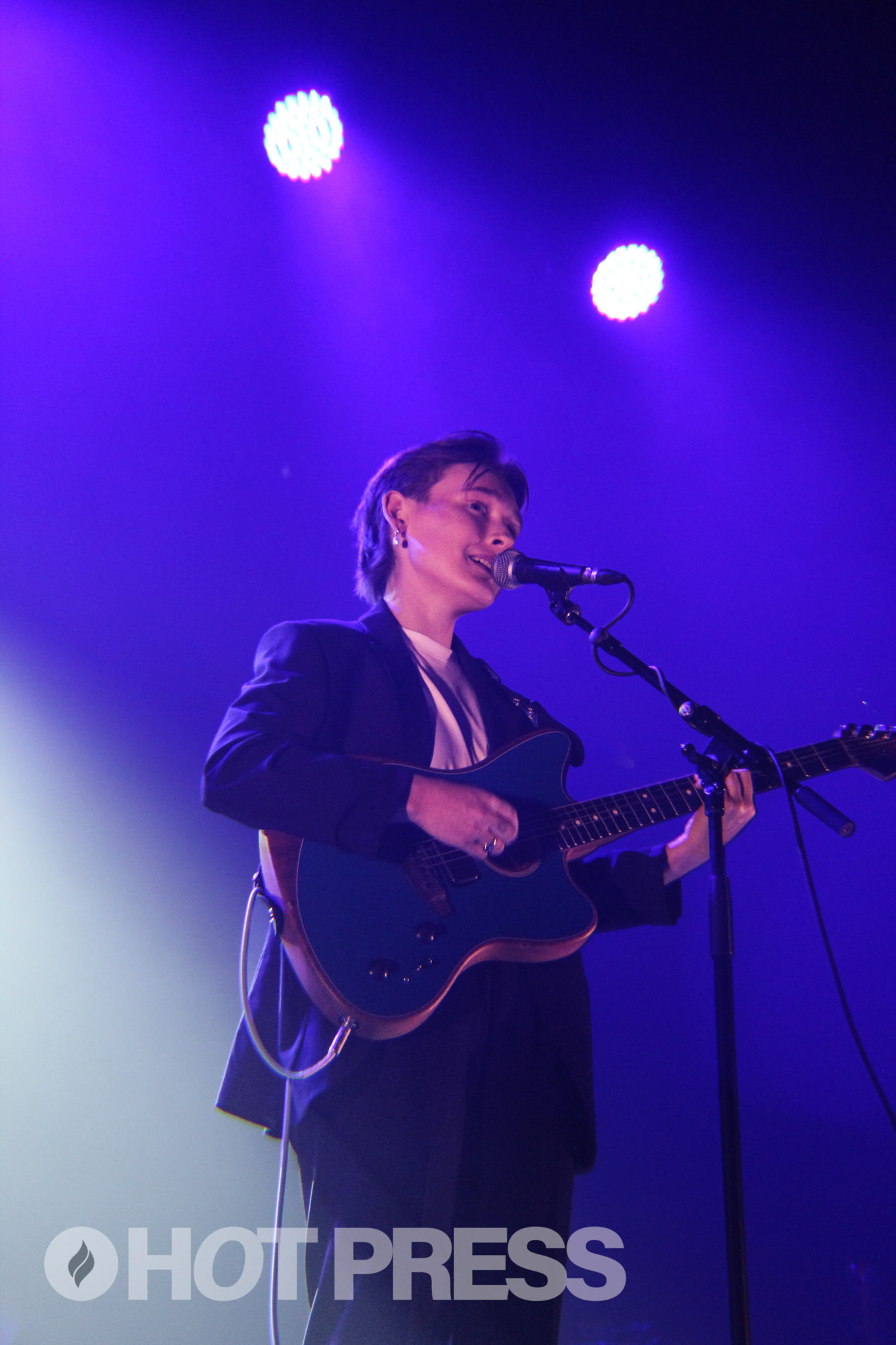 Then, it was time for Lucy, who walked onstage in a floor length blue gown, jewelry glinting in the stage lights. From the first note of 'Triple Dog Dare,' the quality of performance was established.

It's hard to describe the sonic quality of Dacus' voice. Simultaneously light and rich, smooth and emotive, it crests and dives effortlessly, yet intentionally. Combined with the raw edges of electric guitar and heavy drums, the effect is of a beautiful, yet undeniably indie-rock forward sound.

"This is our first show in Dublin," she said to cheers from the crowd. "I walked into this venue and thought I needed to wear a gown and jewels." 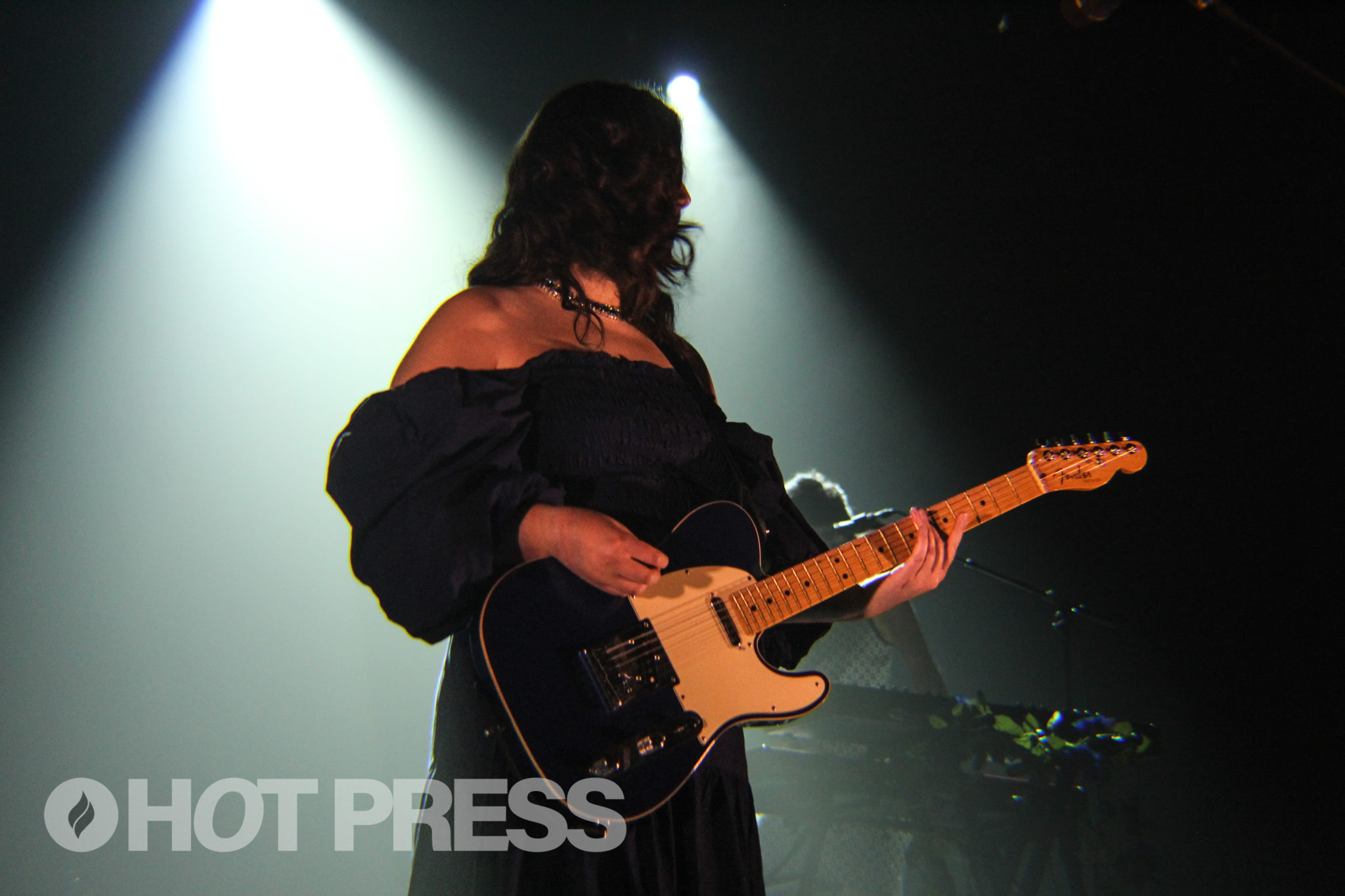 Weaving throughout her 3-record discography, it was made clear the full range of music Dacus creates. Whether it's the delicately heartbreaking 'Christine,' the bluesy 'Timefighter' or danceable 'I Don't Wanna Be Funny Anymore,' there's no way to pigeonhole her sound. It's her voice that stands as the common thread, carrying the potent sentimentality that is woven throughout each of her projects.

Not only was the show the last of her tour, but it also was the culmination of several delays, upgrades and more delays. Originally slated to take place in March of 2021, the pandemic continued to push it just out of reach. Now, after the monumental success of her latest record Home Video, fans are even more excited to see the singer live. "Thanks for waiting," she smiled, clearly equally thrilled to be playing the historic venue. 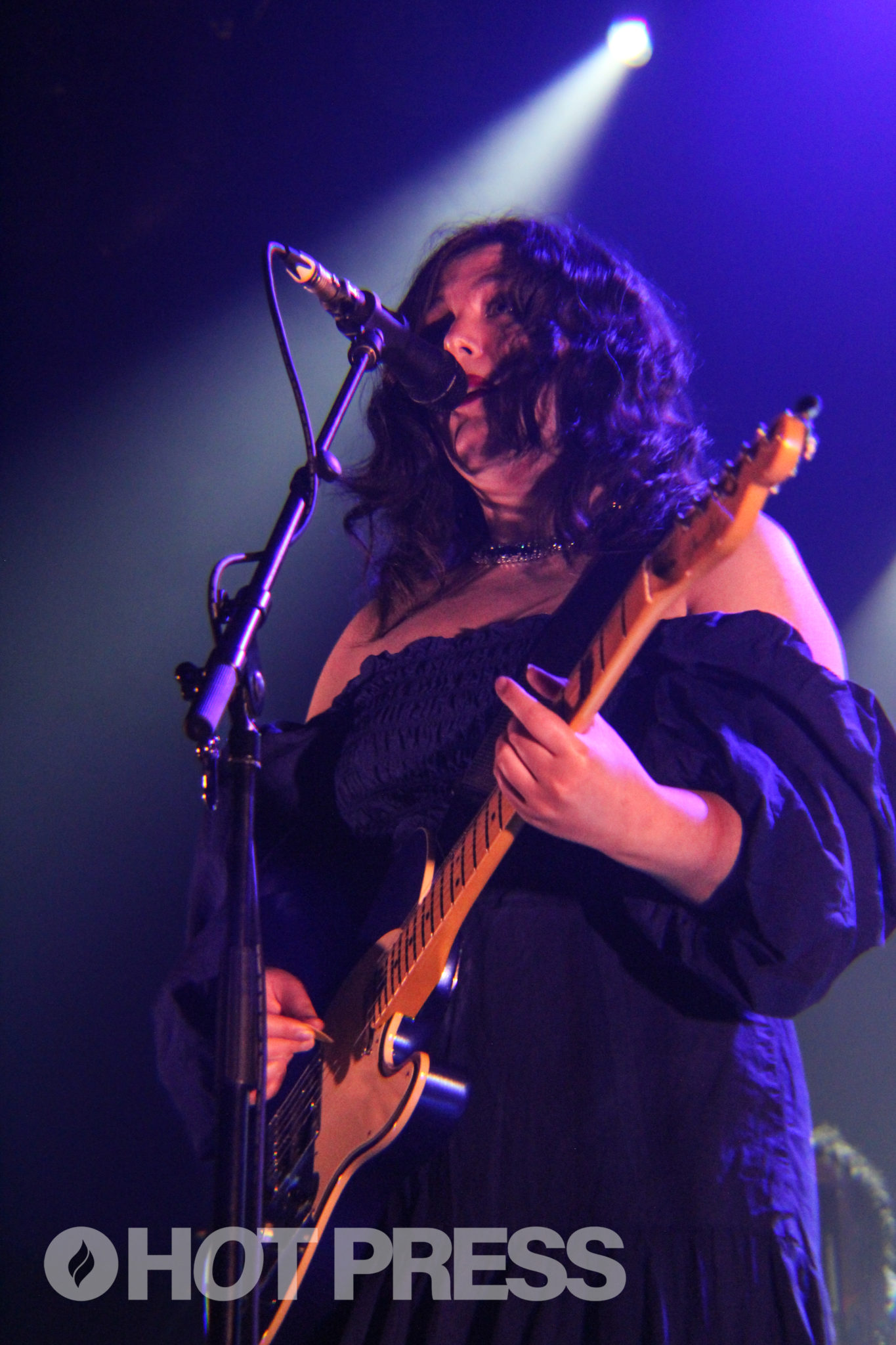 Throughout the set, the songs would be broken up by something slightly different. After a heartbreakingly beautiful performance of 'Thumbs,' a track chronicling Dacus' hatred for a friends absent father, the band swapped their instruments for acoustic guitars for a campfire-like rendition of 'Going Going Gone.' Here, they would sing to the audience, and the audience would sing right back. During 'I Don't Wanna Be Funny Anymore,' her and the bassist performed a well-oiled little dance.

It was the end of the show though, that was the most special. After a soul-shattering showing of 'Night Shift' and an encore rendition of 'Dancing in the Dark' by Bruce Springsteen — "this is the best song I've ever written," Dacus joked beforehand — she finished the set off alone on stage. 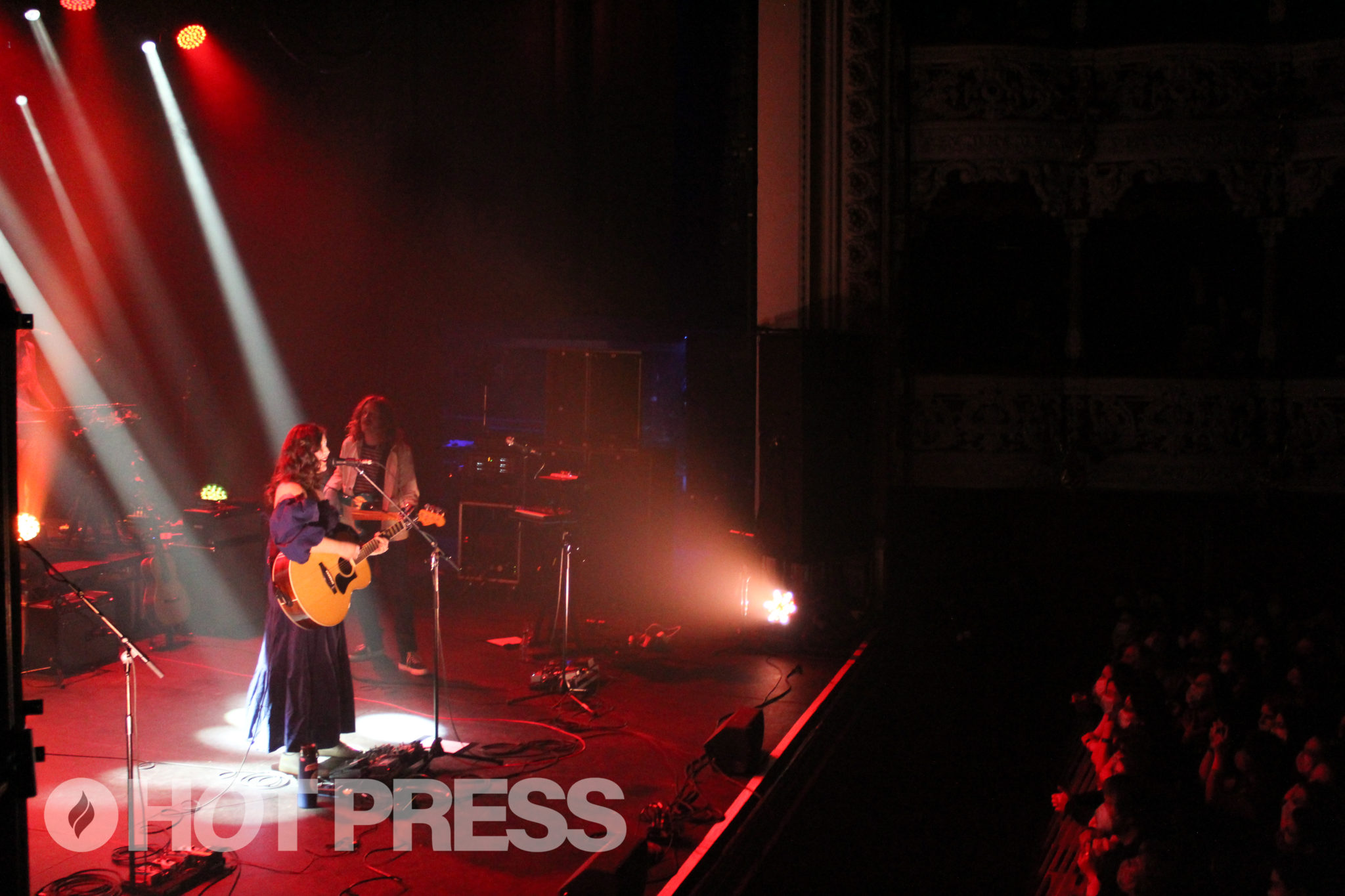 "No one is allowed to record this, I want to record it first," she said. "If you see anyone videoing, I give you permission to unleash your worst self on them." Historically, Dacus has given performances of upcoming songs in this sort of environment. During her Historian tour, she played 'Thumbs' to the locked down crowd, before releasing it as a single — offering a sneak peek to what's coming up next.

Due to feedback issues, she unplugged her acoustic guitar. "Everyone has to be super quiet," she said — and the audience listened. After some shushing, the space was pin-drop quiet, all faces upturned towards the stage as she played a delicate, beautiful and wrenching song. If it has a name, she didn't tell us — and I'm not sure if I could write it, anyways. 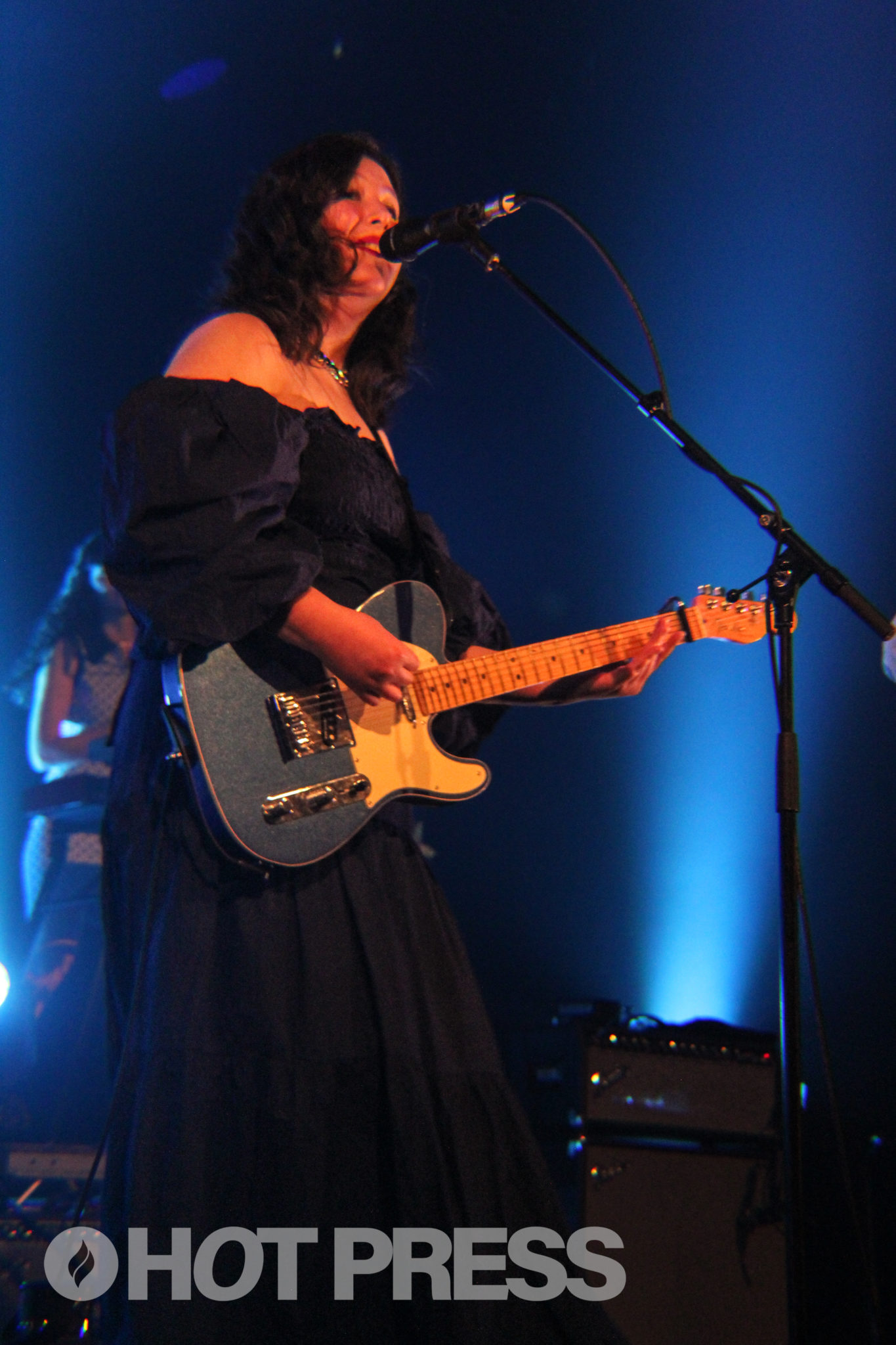 Lucy Dacus is one of those performers that stays with you long after their set. Masterful both musically and lyrically, above all it's the unabashedly honest way that she delivers her songs that is most impactful. Candid and bold, yet vulnerable and gentle, there really is an indescribable magic woven in.

Listen to Home Video, below: