James Joyce And A Disturbance In Barney Kiernan's Pub
By: Pat Carty

The Incident On Little Britain Street. A Bloomsday Eye-Witness Report From Our Archives

It’s a little known, and rarely mentioned, fact that my great grandfather, Byron ‘Blazes’ Carty got his start as a reporter for what was then known as The Hot Press Cultural Periodical in the early years of the last century, covering the chamber music and theatre beat. It was good, hard, honest toil, for which the satisfaction gleaned from seeing his name in print, had to, for the most part, suffice. Fortunately, he had his Boer War pension to make up any shortcomings when it came to satisfying creditors. As was the custom of the day, he kept a journal, a few volumes of which recently came into my possession, following a clear out at the old family seat. His entry for this day, 16th June, in the year of our lord 1904 may hold a passing interest…

Having put another issue to bed, and with the ear full of the sounds of the presses being hand cranked in the basement of 100 Capel Street, I thought it only right and proper to repair around the corner, along the short walk to Little Britain Street, and take a celebratory refreshment or three in Barney Kiernan’s pub. I almost made it out of the building unseen but alas, as my hand reached for door handle, I heard a throat being cleared behind me. It was young Stephen, a recent addition to the staff, vouched for by the owner, Commodore Stokes, who, as usual, was away tending to business on his country estate, still shunned in the town, as he was, following his alleged part in Parnell’s fall. This Stephen chap, whose surname escapes me – Delaney, was it? – had already been booted from a teaching position and was now trying his hand in the 4th Estate. He was of the know-it-all persuasion, given to classical quote and would-be-clever allusion, most times amusing only to himself. In short, he was a trial, but good manners got the better of me, and I invited him along.

Into Kiernan’s with the pair of us just as the clock chimed five bells, and I raised two fingers to Terry who was manning the pumps, to indicate our requirement of two pots of the wine of the country.

“I presume that’s alright by you?” I asked of my companion. “You’re not on the dry or anything blasphemous like that?”

“I’m not taking anything between drinks,” was the younger man’s attempt at wit, delivered with the usual annoying grin.

His company was torture enough, but I very nearly turned heal and left again when I spotted a patron best given a wide steer, already, it seemed, on the outside of a few good ones. In the interests of avoiding the courts I won’t record his name, this citizen with an opinion on everything, an unpleasant air about him, and his one good eye in which a tear and a smile strove ever for mastery, but too often lost out to a filthy look. I was in luck. Joe Hynes and another, who I didn’t know, were giving our man the low down on the meeting in the City Arms, pertaining to livestock and the foot and mouth.

“If there’s a further outbreak,” speculated Hynes, “we might well be confined to quarters for a period of months, with all events of interest and distractions of worth cancelled!”

A round of guffaws was his reward for such a ridiculous notion. Terry had fulfilled our request and we took our seats. I raised a beaker to the Lord Of The Vat and then the first mouthful hit the bottom of my bag with an almost audible click. I lit the cigar I had also troubled Terry for and exhaled in satisfaction, feeling all was well. The plucking of an acoustic guitar from the corner shattered the reverie. Another bookish looking chap, dodgy of eye – one looking at you, the other searching for you – sat on a stool, giving it out in far from fine style. 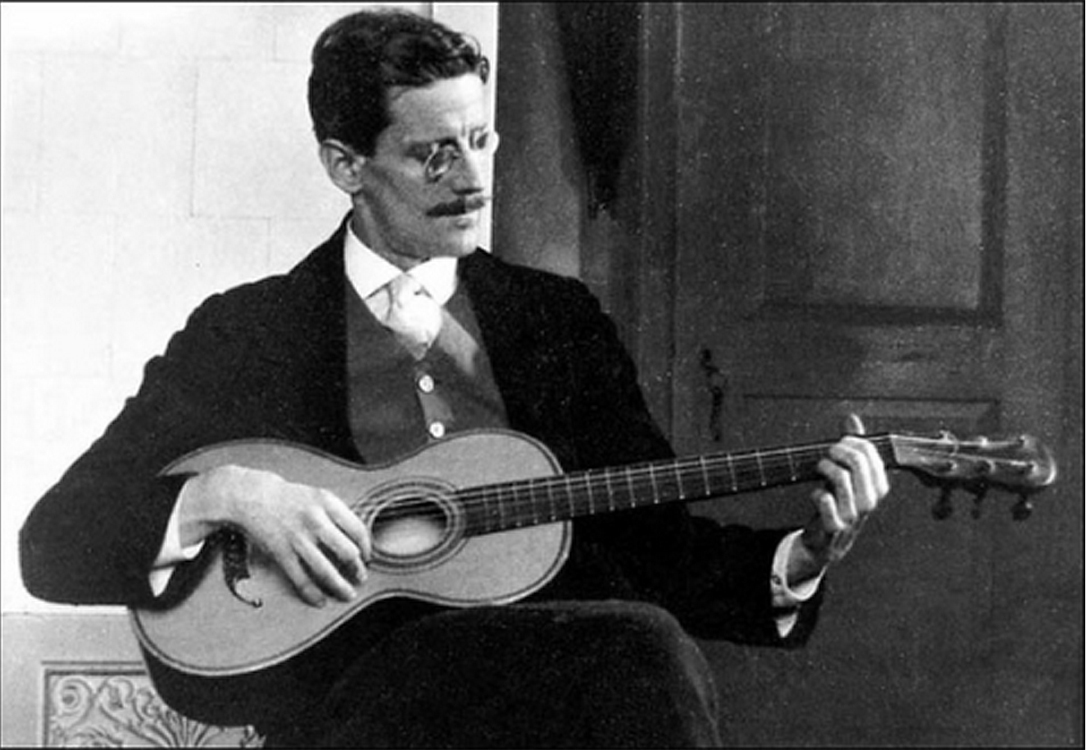 “Lightly come or lightly go:
Though the heart presage thee woe,
Vales and many a wasted sun,
Oread let thy laughter run,
Till the irreverent mountain air
Ripple all thy flying hair.”

“He’s no son of Euterpe, or Erato for that matter,” quipped Stephen as he quaffed, although his syllogism fell on stony soil.

“Has he no auld ballad or amhrán?” spat the citizen.

I had recently attended a performance by the noted tenor Harry Plunket Greene in St. Jame’s Hall and was most taken with his reading of Elgar’s ‘A Song Of Flight’. I caught one of yer man’s eyes and called for the tune, clanging a pint pot against the marble for emphasis.

He looked at me, quizzically, and then it came to him.

“It soared, a bird, it held its flight, a swift pure cry, soar silver orb it leaped serene, speeding, sustained, to come, don't spin it out too long long breath he breath long life, soaring high, high resplendent, aflame, crowned, high in the effulgence symbolistic, high, of the ethereal bosom, high, of the high vast irradiation everywhere all soaring all around about the all, the endlessnessnessness...”

What was this rot, sure to sour the stout in the gut? My head began to hum as I called for ‘A Song Of Flight’ a second time.

“Ah,” says he. “A Dedalian bird that would utilise the arms of silence, exile and cunning to soar above the clutches of church and state, but not so close to the eye of heaven for fear of melted wings?”

The nature of my patience was as follows: wearing thin.

“Are you going to play the tune, or no?”

“And yes I said yes, I will yes,” this singer spoke, heart going like mad in his faraway look.

I was just about to send Stephen around the corner to collect my winnings, having had a bit of luck with a long shot called Throwaway, winnings I planned to use to encourage Terry to repeat the dose, when I saw Bloom come in. He’s a good sort, worked on and off for the paper, hawking advertising space, and the like. The opposite end of the spectrum from the citizen, they were now engaged in spiky chat. I overheard tell of the effect on the lower reaches of the body as a result of being strung up on state’s orders.

“A tumescence engendered by tumult, what?” I nudged Stephen, but the witticism sailed over his head.

The citizen had the bit in now and was questioning Bloom’s parentage and background. Hats off and fair play to Bloom, he tried not to rise to it.

“Hatred? That’s not life for men and women. Love, I mean the opposite of hatred”

Love loves to love love, you could not help but admire the man, but this was not a sentiment the citizen shared.

“I’ll hit you a puck in the wind that’ll make you puke what you never ate! I’ll give you a rousing kick where it won’t blind you!” he roared, through spittle-flecked lips.

When Bloom called on our Lord’s name, rightly claiming him as a son of David, the citizen, as well as his mangy hound, made a go for him. It was at this point I stepped in, hustling Bloom out the door and into Cunningham’s waiting cab. I was rewarded with a belt from a biscuit tin, thrown in anger by this true son of Éireann. I’d had enough. I withdrew, like a shot off a shovel, with the slip in my hand, to collect my winnings and secure a bottle of Tullamore for the digs.

President Michael D. Higgins: "We Are Facing An Emergency In The Cultural Sphere"
Aidan Gillen on how Ulysses was the Never Mind The Bollocks of its day
Bloomsday 2020 to be celebrated differently due to Covid-19

Playlist: Carty's Golden Hour #10 Bloomsday
Minister for Agriculture Barry Cowen Issues Statement Denying That He Attempted To Evade Garda
PREMIERE: James Cramer – 'My Darkest Hour'
President Michael D. Higgins on Rory Gallagher: "A musical genius"
Johnny Marr on Rory Gallagher - The Full Hot Press Interview
Office of the Ombudsman Will Make Skellig Star Visit A Priority
We use cookies to ensure you get the best experience on our web site - by using this web site you consent to our use of cookies. Read more »