The autumn events series at the famed Donegal hotel is supported by the Department of Tourism, Culture, Arts, Gaeltacht, Sport and Media.

Letterkenny's Mount Errigal Hotel is set to host a slew of live music events this autumn, starting from October 2nd and running until the 24th.

Dublin-born musician Eleanor McEvoy has been playing music since she was four, and graduated from Trinity College, Dublin with an Honours degree in music, has long been an integral part of the Irish music scene. Her song with Mary Black, 'Only a Woman's Heart,' is part of one of the best-selling albums in Irish history. One year after its release, McEvoy shared her self-titled debut album in 1993.

Alongside her music career, McEvoy is the chairperson for the Irish Music Rights Organisation (IMRO), an organisation dedicated to promoting and sponsoring musicians and live music in Ireland.

One of Ireland’s most respected performers, Jack L (Jack Lukeman) has toured internationally with artists like Imelda May, Jools Holland and The Proclaimers. That work stopped in its tracks, the Athy songwriter and performer achieved huge lockdown success with his Facebook Live shows online, subsequently releasing an album of songs titled Streamed: the Best of the Lockdown Sessions. With the series standing at over 400,000 views; Jack L has recorded his new album of original material, set for release in 2022. He has also announced a new podcast series titled 'Postcards from the Edge'.

Birr-born singer-songwriter Mundy, founder of the independent record label Camcor Records, has broadened his horizons outside of the folk genre since releasing his debut album Jelly Legs in 1996. Real name Edmund Enright, the former Grafton Street busker found international fame in the 1990s and has toured with some of the biggest names in music over the last two decades.

The Ballyraine establishment's autumn events programme looks better than ever, with some of Ireland's finest live talent set to perform.

Tickets for all gigs are available now from €20 here.

Check out the full line-up with dates below: 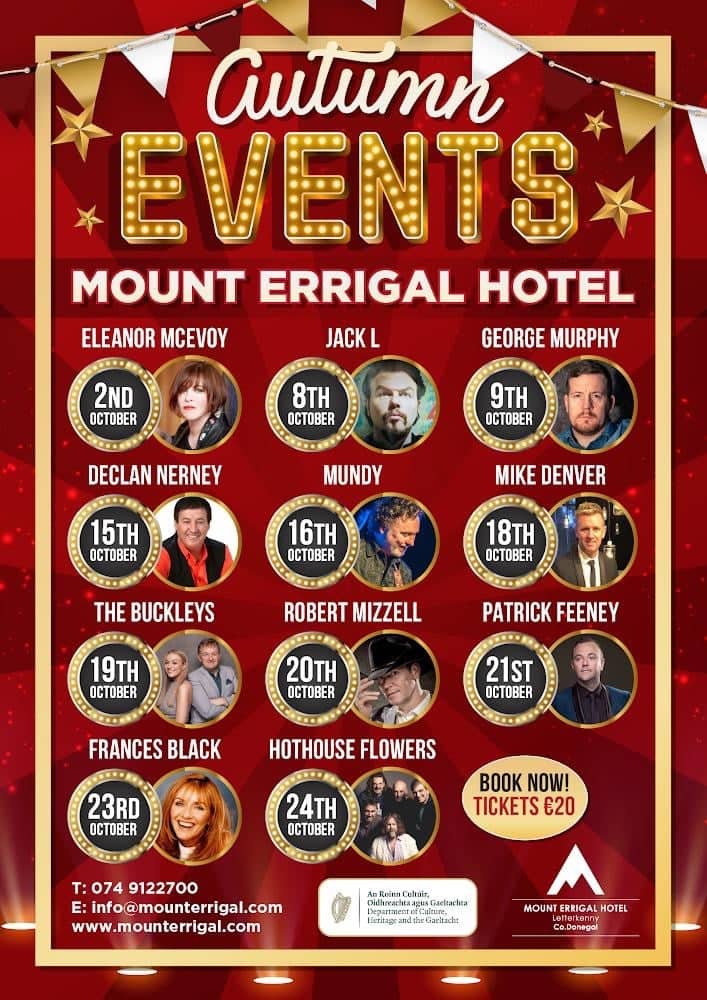