Book Interview: Bewildered By The Dying Of The Light
By: Pat Carty

The Vicissitudes Of Modern "Culture" Have Stranded One Of Society's Echelons Higher And Drier Than All The Rest. Declan Lynch And Arthur Matthews Throw Some Light On The Plight In Their Gas New Book, Notes From A Lost Tribe: The Poor Ould Fellas.

There is, as we all know, no country for old men. It turns out there’s not much room for ould fellas either. Ten years after they first uncovered this strange caste that haunts the edges of our reality, Declan Lynch and Arthur Matthews have returned to these tattered coats, and hats, upon sticks for Notes From A Lost Tribe: The Poor Ould Fellas, a Ginsbergian Howl – albeit one hardly involving the best minds of any generation - at an era that has left them behind. Every aspect of modern life, from advertising to wi-fi, is a source of torment to these poor souls. But the most shocking realisation is that we are all similarly hollow men, useless in a dead land, whimpering. It would have you reaching for the straight razor if it wasn’t so painfully funny.

Why write a second book? Lynch’s answer is as sad as it is obvious. “The issue is still out there, they haven’t gone away, at least some of them haven’t. Before the first book, I was writing this stuff for the Sunday Indo, and I thought there has to be a book in this because they’re all self-contained pieces that deal with the various issues. Arthur Matthews, who I started out with in Hot Press, enjoyed the stuff as well, and he does such beautiful, poignant drawings of the Ould Fellas.” It’s the cap and dog that brings it home. “Yes, the writing is very savage, full of rage, but the drawings add a kind of softer dimension.”

The flat cap in question does raise the spectre of the Healy-Rae Brothers though. “Michael Healy-Rae has donned the iconic garb of the ould fellas, realising its power. In fairness, they do represent the voice of the poor ould fellas but in other ways they are light years away. For a start they’re not poor, and they’re very connected to everything. Yes, they’re a bit ould, and they’re fellas, but in almost all salient aspects of their lives, they are not the same. But they would know ould fellas and they would have a better sense of them than say some Fine Gael TD for Dún Laoghaire.” 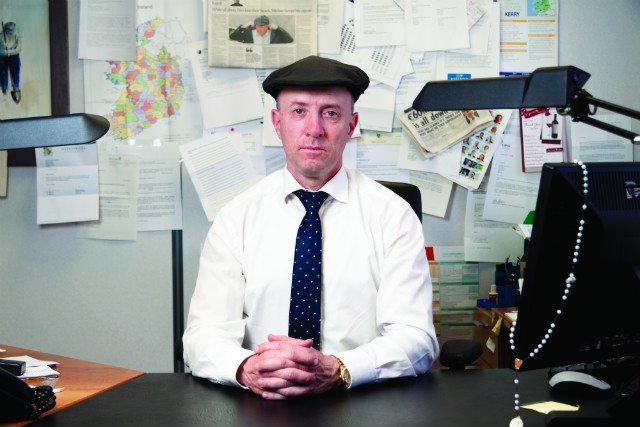 Has their plight worsened in the interim decade? “We didn’t want to do another book but there have been huge changes which have adversely affected these men. The Internet is far more prevalent and there has been fundamental social changes, such as same sex marriage. None of which they have any objection to in any kind of self-righteous or moral way, it just complicates their lives a little bit more. For the already bewildered old man, life has become a little bit more bewildering.”

Mention of the internet brings up a particular Lynchian bugbear, the modern notion of ‘content’ and how it is, to quote the book directly, “all fucking shit”. Lynch expands on this. “Everybody feels a little bit out of place in the modern world and I think that’s the key to it. The thing about the idea of ‘content’, I absolutely believe that. Do you know what Oppenheimer said when he discovered the formula for the nuclear bomb?”

I have become the destroyer of worlds?

“Yeah, the fucker who thought up the word ‘content’ should have had the same kind of reaction because that one word is the destroyer of worlds, it really is. Once you call everything content, you diminish everything. Once you liken a Van Morrison record to some shit that some guy puts up responding to an article on the internet, you’ve done some basic damage to the culture, and we’ll never get over it.” 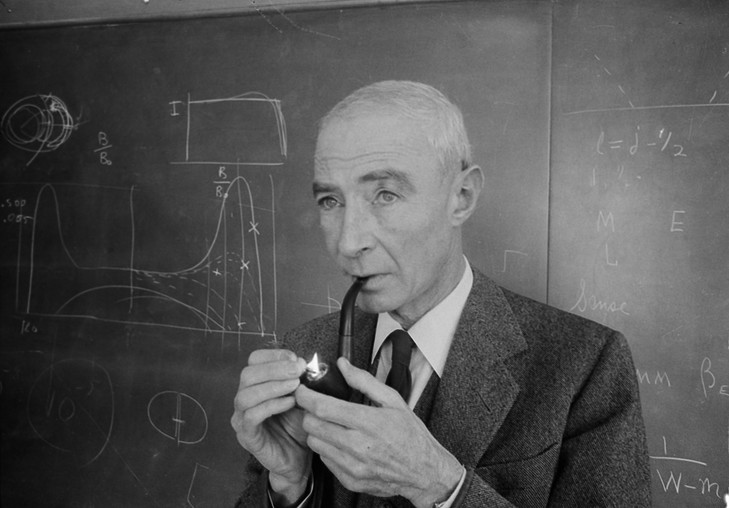 It's a King Canute situation surely, there’s no way to hold back the tide of shit at this point? “I guess the comedy, or the black comedy, in the book and in the whole idea is  based on this endless misery and hopelessness, that there can never be a chink of light. If you think of any good sitcom, they have to live in this permanently repeating hell, and they’re always defeated.”

That being said, towards the end of the book these men, who have never suffered “FOMO” or any such modern angst, become almost something to aspire to, largely unaware of this torrent the rest of us constantly face. “They have something that the rest of us now want”, according to Lynch. “They never actually embraced change in the first place. They realised all change is bad. They don’t seize the day, they kill the day. All of their instincts are the opposite of the way we are told to approach life, and yet, because of that, they have actually emerged in a slightly envious position. They never had to wean themselves off smart phone because they never weaned themselves on to the bloody things in the first place”

As Lynch points out in the book, there’s a Beckettian hum off the whole enterprise. “That was only something that occurred to me as I was doing the first book: Vladimir and Estragon are just poor ould fellas. They’re in this permanent limbo, the almost certainly hostile world around them means nothing and they’re bewildered. John Hurt in Krapp’s Last Tape, that is the perfect poor ould fella, isolated and abandoned. There’s an almost Buster Keaton quality to the manner in which life always conspires to leave them at the wrong end of things. They are a kind of a conduit for the general state of abandonment that most of us feel. We all suffer from these modern malaises, it’s just that they suffer from them most acutely, because they cannot understand why any of these things are happening, and in a way they are fucking right.” 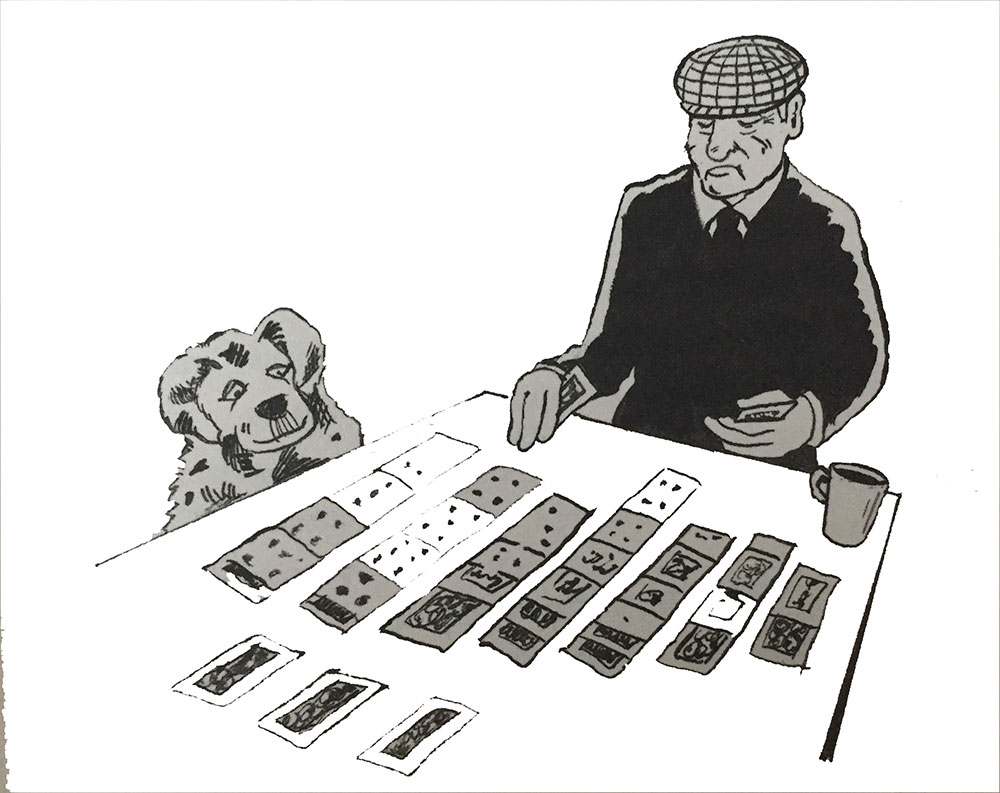 There’s a possible comparison to be made with the Cruiskeen Lawn columns of Myles na gCopaleen too. “His kind of humour was always terribly dark and angry, so in that sense, yeah. The really funny things are terribly serious. Jewish people have always understood this. I felt in writing it that the angrier it gets - and I am genuinely enraged on behalf of these people - the funnier it gets. Things that are quirky or whimsical are just never enough, the real funny stuff tends to be dark. Fawlty Towers is built on the incoherent rage of one man and his inability to deal with the horror of the world around him. Rage is really funny if it’s done in a certain way and I think that’s the strongest energy in the book.”

“Most of these things are quite reasonable but it’s just that the modern world has made them seems unreasonable.”, Lynch continues. “It is quite reasonable not to spend your life just texting or tweeting. A good example is the drink driving thing. I under no circumstances condone drink driving but what’s extraordinary is that the one thing that is really dangerous on the roads is people using phones, and the last people in Ireland who would be doing that are the poor auld fellas! In a really perverse way, no matter what issue is out there, they always seem to end up on the butt of it.”

Couldn’t this then, in a certain light, be seen as a self-help book, a guide against the tide, so to speak? “Self-help books are all badly written and woefully over-simplified but I think anything that is true has a weight to it so I get what you mean, the ould fellas have something that other people have lost, but they don’t even realise it.”

Notes From A Lost Tribe: The Poor Ould Fellas by Declan Lynch with Arthur Matthews is out now.

Album Review: Laura Marling – Song for Our Daughter
WATCH: First look at After Life Season 2
Asylum Seeker Tested Positive For Covid-19 Was Refused Entry By Direct Provision Centre
Willie Nelson to host Digital Farm Aid with Neil Young, Dave Matthews and more
Luan Parle releases homegrown video for 'Change Your Mind'
EXCLUSIVE: Radiohead's Ed O'Brien on COVID-19 recovery, his solo debut, OK Computer and Northern Ireland
We use cookies to ensure you get the best experience on our web site - by using this web site you consent to our use of cookies. Read more »