The U2 frontman’s ‘Crazy Mountain’ will form part of the Climb With Charlie campaign, in which the RTÉ broadcaster – with the support of Bono – aims to raise money for the Irish Motor Neurone Disease Association and the mental health charity, Pieta House.

U2 main-man, Bono, is set to release a special song, dedicated to the broadcaster Charlie Bird. The release is timed to coincide with the former RTÉ news stalwart’s Climb With Charlie campaign .

The song is titled 'Crazy Mountain' and will receive its first spin on The Ryan Tubridy Show on RTÉ Radio 1 on Friday February 4. The show runs from 9am to 10am.

Born in 1949, Charlie Bird announced in October of last year that he had been diagnosed with Motor Neurone Disease, a neurologist degenerative disease which often results in difficulty speaking. In a broadcasting first, listeners to the Ryan Tubridy (pictured below) Show will hear Charlie Bird’s new, cloned voice for the first time, as he introduces the song himself. 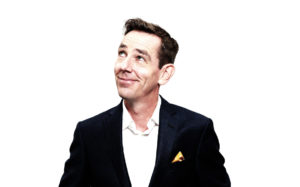 Following its first airing on The Ryan Tubridy Show, the song will be available to the public via the Climb With Charlie social media channels, on Facebook, Instagram and Twitter. Charlie Bird will climb Croagh Patrick in aid of the Irish Motor Neurone Disease Association and Pieta on Saturday April 2.

"This is an outstanding gesture,” the campaigner said today to RTÉ. "I am overjoyed and could not believe the message that I received from Bono.

"He has been hugely supportive of the Climb With Charlie campaign, which aims to raise funds for two amazing charities, the Irish Motor Neurone Disease Association and Pieta.’’

Bird was himself diagnosed with Motor Neurone Disease, one of the outcomes of which is that he will lose his natural voice.

‘’I want to encourage everyone to log on to www.climbwithcharlie.ie and donate what they can or set up their own fundraisers to climb in their local area – be it climbing a set of stairs, or a short walk around the house, around a local park, a walk to the beach, whatever you are able to do.
"Climb With Charlie is a nationwide initiative to recognise the huge physical and emotional mountains so many of us have to climb in our daily lives.’’

Charlie Bird first met Bono in Washington DC when the U2 frontman was involved in a series of humanitarian visits to the US government. At the time, Charlie was the RTÉ Washington Correspondent.

On this day in 1984: Bob Dylan was joined on stage at Slane by Bono and Van Morrison
Countdown to Forever Young Festival: In Tua Nua's Leslie Dowdall
Bono opens up about discovering his half-brother in 2000: "I’m at peace with it"
U2's Bono and The Edge in talks to compose music for Jim Sheridan's semi-autobiographical film
On this day in 1998: U2, Ash, John Hume and David Trimble took part in the historic Good Friday Agreement gig in Belfast
WATCH: Bono reads an extract from his upcoming book SURRENDER: 40 Songs, One Story