'Free Dope, Make Hope': The War Against The War on Drugs Comes to the Phoenix Park
Izzy Rowley

Why the hell are we criminalising people who enjoy a joint? Why are we denying access to medicinal cannabis to people who badly need it? To the organisers of the Major Smoke Up demonstration in Dublin last weekend, these are key questions in the battle to have weed legalised in Ireland…

It’s a sunny Saturday afternoon in the Phoenix Park. Over the course of the day, 1,200 people will gather by the Wellington Monument to assert their right to use cannabis.

This is the scene for what has been titled ‘Major Smoke Up 2021’ – a march and demonstration, organised for July 9, by the volunteers who make up the eponymous organisation.

A little after 3pm, a large group marches past the Criminal Courts of Justice on Parkgate Street, the office of the Director for Public Prosecutions on Infirmary Road, and Garda Headquarters (with an address in Phoenix Park), before returning to the Monument for a “picnic in the park.”

“My biggest thing is normalising cannabis consumption and ending prohibition,” says Charlene Flynn, who is the head of the Major Smoke Up initiative. 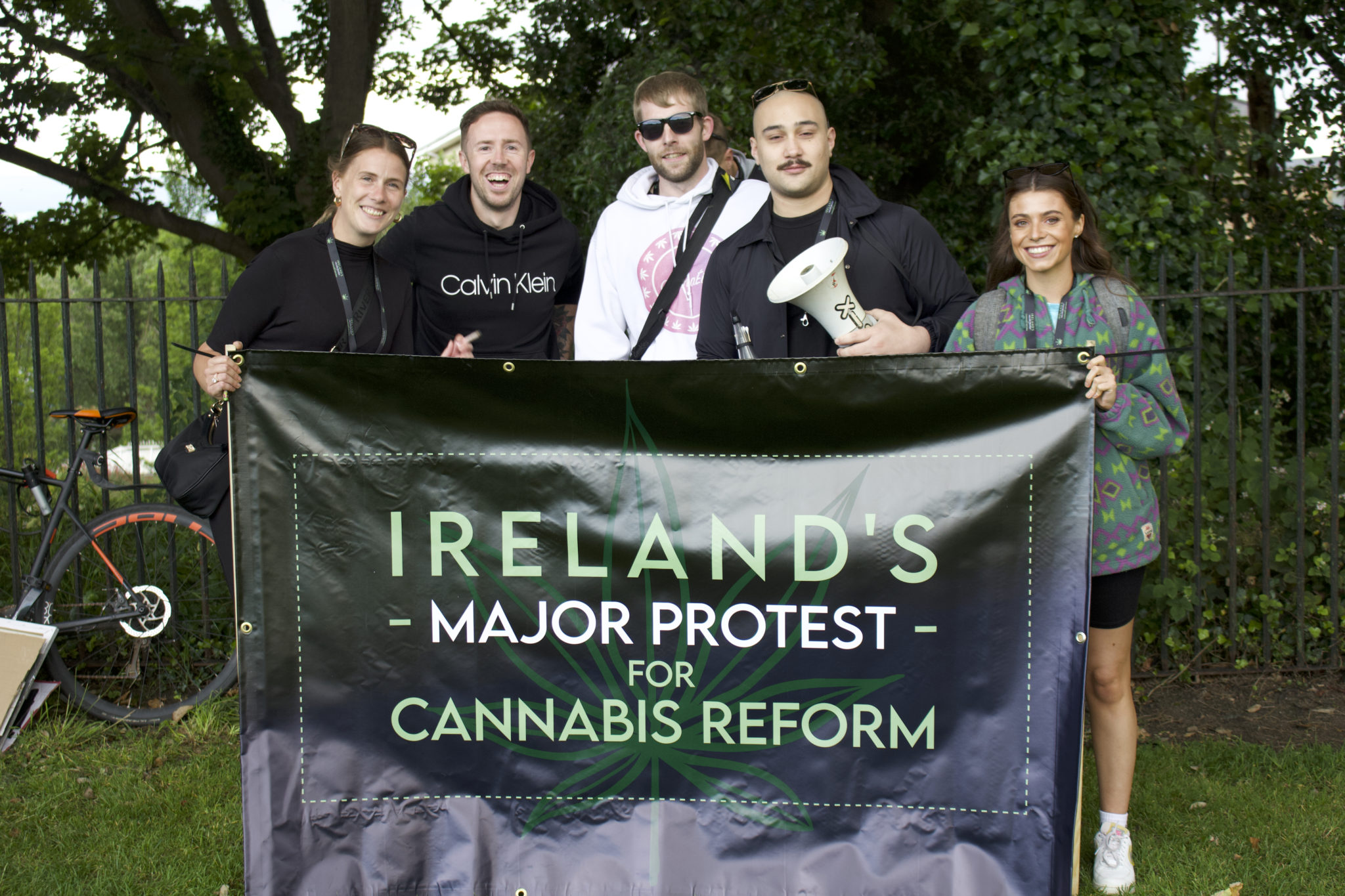 The Major Smoke Up team

“For me it’s a huge class issue. It’s easy to blame drug problems on working class people, or to blame problems in those communities on drugs, but drugs go across all classes – it’s just more visible in working class areas because we don’t have to support or the education to be able to find the help when it’s necessary.”

Charlene is in no doubt that the legalisation of cannabis would be the right decision for government to take.

“If cannabis was legalised, it would mean fewer [criminal] charges for young people,” she explains, “and more opportunities for them to succeed later in life because they don’t have a label hanging over their heads from being caught with maybe a half-empty grinder, or the end of a joint.”

Pauric, who has combined his professional skills as both a horticulturalist and chef to create a business selling everything from CBD-infused treats to animal bedding made from hemp, knows exactly what Flynn is talking about.

“I was caught for personal use in 2007,” he recounts. “I got a fine for it that I never paid. Ten years later, I got a job, on the spot, at a nursing home, as a commis chef. Once the Garda vetting was done, they rang me and said they couldn’t take me. I didn’t think that was a conviction until then, but it obviously was, so now it’s coming back to haunt me.”

Last year, it was announced that those caught with cannabis could be cautioned rather than arrested, with Gardaí being told to ‘use their discretion’ to determine what was appropriate.

“I think a rule like that is good if you’re the likes of Leo Varadkar, and you’re with your college mates taking a few yokes,” says Martin Condon, a prominent cannabis activist who runs the ‘Martin’s World’ podcast and website. “If you get caught it’s just a slap on the wrist, but, if you’re a young [working-class] person like I was, and you get caught once, you’re targeted again and again.” 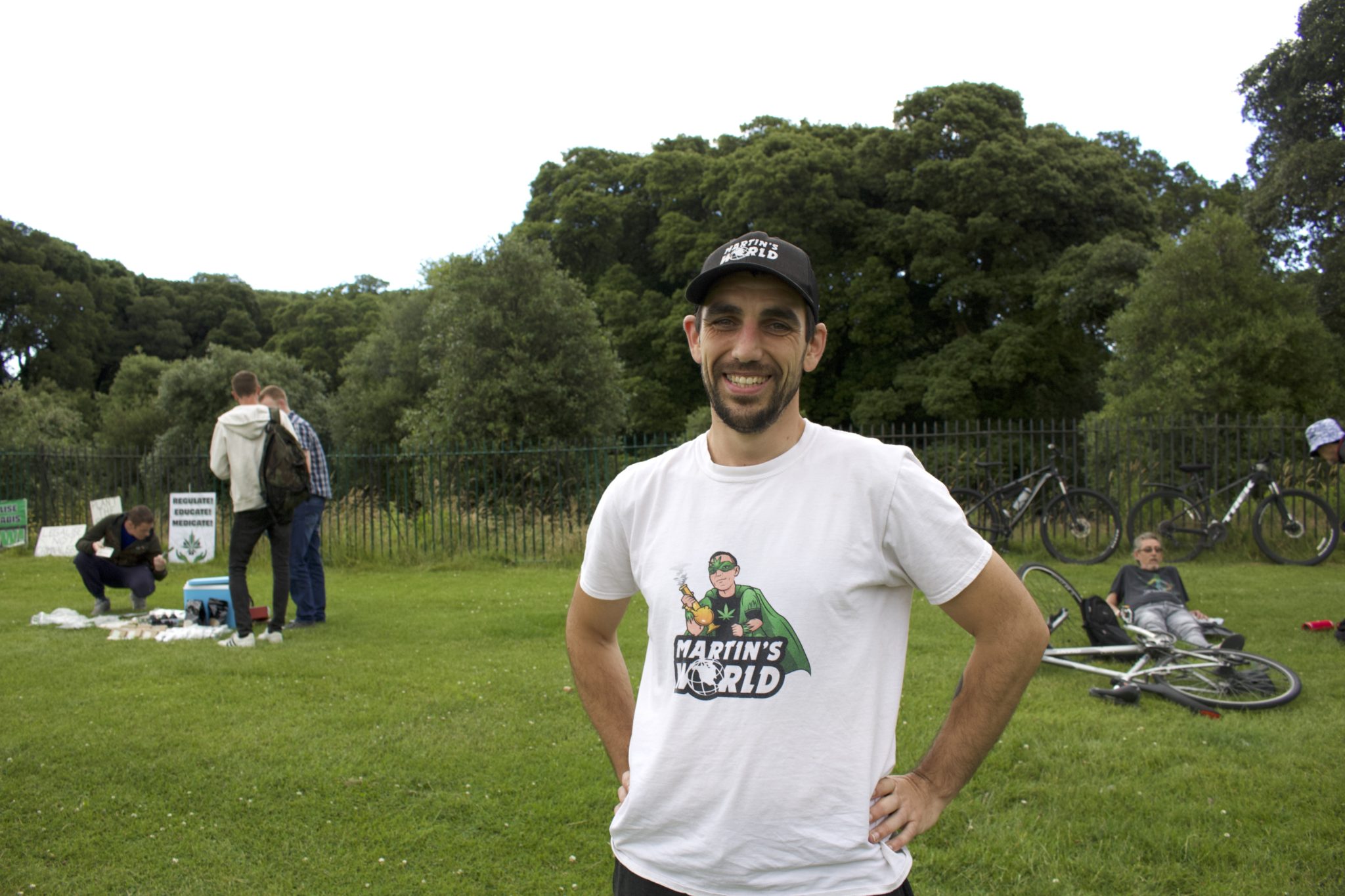 Condon feels there are even bigger issues at play here. Recent reports have confirmed that Irish criminal gangs are recruiting children as young as 11 into serious crime, using drugs, alcohol, and the notion of status to attract them.

There are different versions of what is called the ‘gateway theory’. The first – dismissed by cannabis campaigners – is that use of cannabis introduces people to harder drugs.

The alternative version is that buying cannabis illegally from a dealer is indeed a possible ‘gateway’ into crime, as it potentially puts users into the precarious position of becoming indebted to that dealer – who uses the opportunity to force individuals into dealing drugs or engaging in other criminal activity, to pay off the debt.

“Having cannabis as a prohibited drug is fulfilling this ‘gateway drug’ theory,” Martin says emphatically, the noises of a Saturday afternoon in the Phoenix Park a gentle hum in the background. “If you were to remove this criminality, you remove this hook that organised crime gangs have on our younger population, making it more difficult for young people to get into a life of crime.”

That is the view which is taken by the vast majority of people who work on the ground with disadvantaged youth.

“When I was going buying alcohol from an off-licence as a young person,” Martin adds, “there was no fear of being indebted to the owner because he wouldn’t even sell it to me. I had to get my cousin, who was 18, to go and buy it for me. There was no danger there except from the substance itself. Whereas, with cannabis, the dangers of buying it for young people are huge.” 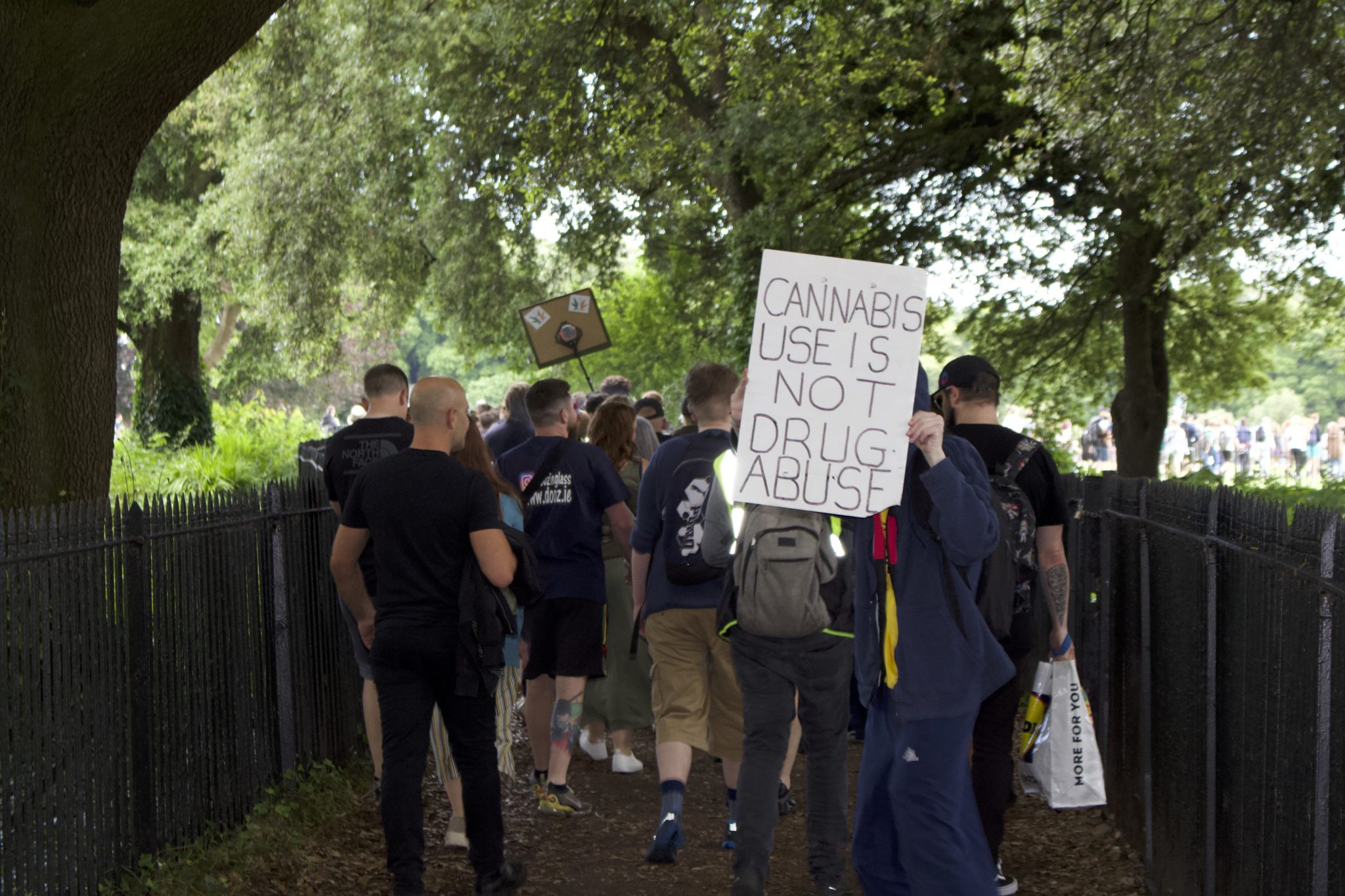 Protestors marching for their right to access cannabis legally.

Protestors in the Phoenix Park are not just concerned with recreational use: access to medical marijuana is another major issue. Currently in Ireland, it’s possible to be prescribed a cannabis-based treatment if you suffer from one of three things: ‘spasticity’ associated with multiple sclerosis; intractable nausea and vomiting associated with chemotherapy; or severe, refractory, treatment-resistant epilepsy.

Kenny Tynan is a representative for Patients for Safe Access, an organisation set up to ensure safe and legal access to cannabis for therapeutic use and research, to protect the rights of medical cannabis patients, and to promote scientifically valid information about cannabis use.

“We think the medicinal cannabis access program is very restrictive,” Ken says. “It doesn’t include patients, who, especially for chronic pain, could benefit from it.”

Tynan previously used medical marijuana to alleviate symptoms of an illness he was suffering from. He feels the cost of his treatment, at €4000 per month, is seriously prohibitive.

“I believe that patients deserve safe access. I suffer with endometriosis, which brings chronic pain and debilitating agony. It effects every aspect of my life and cannabis is the only thing that’s gotten me through,” she tells me.

“I already feel oppressed where women’s health is concerned, and then I’m further discriminated against for choosing to manage what is a debilitating condition with cannabis.”

Brown’s symptoms first appeared when she was 11, but it wasn’t until she was 21 that she finally received a diagnosis – a phenomenon common for endometriosis patients.

Brown tells me about a new study at the University of Pompeu Fabra of Barcelona, the initial results of which have shown that when treating endometriosis in mice with cannabis, the drug alleviates symptoms of the disease and is effective as pain relief.

“Where is this magic line that says it’s okay in one country and it works there, but it’s not legal here and I’m a criminal?” she asks.

The protestors chants are unlikely to make the headlines or to feature on the 9 o’clock news. But that doesn’t make them any less heartfelt – or important.

The Gardaí direct the protestors on their route – and then, leave them to it in Phoenix Park itself, as soon as the march is finished. Finally, the demonstrators can partake in their last act of civil disobedience for the day – getting high by the Wellington Monument.

Demi Moore documents sexual assault at age 15
Ritalin: They Call It The College Drug
SOAPBOX: The return of Reefer Madness

Frontlines: Rory Stokes Speaks Out About Big Pharma and Drug Addiction
Huge spike in STI cases reported since January 2022
The Hog - Drugs: "Is The World Finally Waking Up To Progressive Policy?"
Jenny Keane announces in-person sex education show in April 2023
MDMA could be available in US hospitals by 2024 after PTSD trial
Mind Magic - Using Psilocybin To Treat Mental Illness: "I've never had such a positive, immediate response to a therapy"