Polish LGBTIQ activist Bart Staszewski: "There is a price that you have to pay for activism, and I’m willing to pay that"
Shamim Malekmian

The EU has been declared an LGBTIQ "Freedom Zone". Sadly, however, the reality on the ground in places like Poland and Hungary involves a very different story. Which is why a LGBTIQ activist like Bart Staszewski is facing into an uncertain future. “I want to fight,” Staszewski says. The hope is that he won’t end up behind bars in the process…

Bart Staszewski is in a something of a pickle. There are about 20 ongoing police investigations into the his artivism-related work in Poland. He has already been charged. He may yet face a prison sentence.

But one thing is for certain: he is not leaving Warsaw.

“I have to fight the fight,” he says. “I mean, I stayed in Poland because I knew I wanted to change something, like so many other people here.”

The charges against Staszewski are designed to seem non-political, like one about ‘attaching a sign where it wasn’t allowed’.

That one relates to the artist’s most famous art project. For it, he travelled to six Polish towns that had declared themselves as so-called “LGBT-free zones”. He travelled around the areas, hanging yellow signs – like road signs – that read “LGBT-free zone” in several languages. Nothing says that ‘intolerance is now normal here’ more clearly than a simple street sign.

The European Union imposed a rare financial sanction on these Polish towns last year. But there has been no change in official policy as a result. 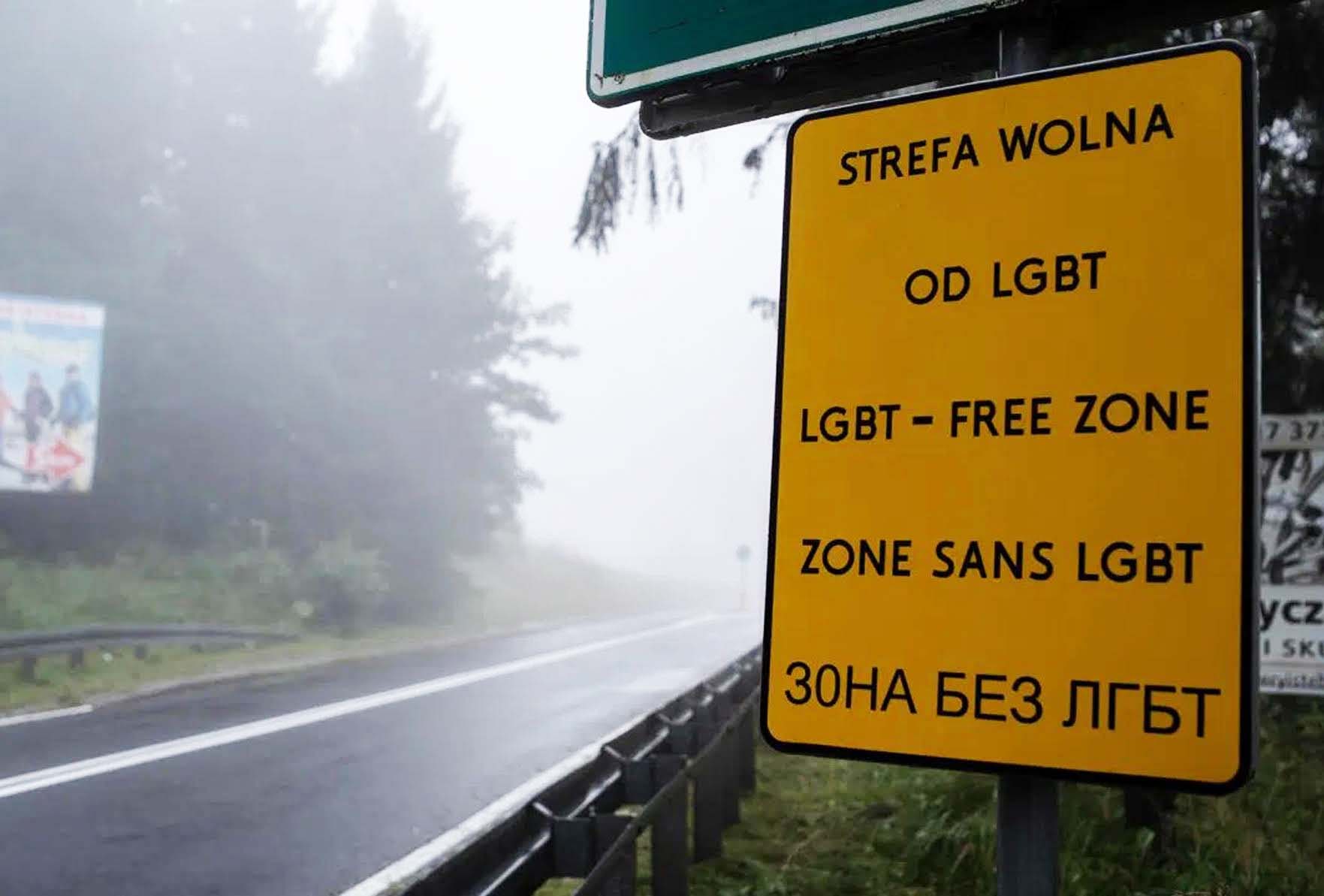 Sign hung near a road in an LGBT-ftee Polish town by Bart Staszewski.

Bart Staszewski is a queer documentary-maker and an artist. His work exposing Poland’s LGBT-free zones drew global admiration, winning a place for him in Time Magazine’s 2021 list of 100 Emerging Leaders.

He has travelled far and wide to expose the reality: that his Government not only marginalises queer people like himself but actively reviles them. In his latest documentary, titled Article 18 – after a clause in the Polish constitution that defines marriage as a union between a man and a woman – he follows a Polish queer couple to London, where they try to settle with their small homesick boy, in pursuit of happiness. Under Polish law, same-sex couples can’t raise a child together.

The Government and State-funded media channels grab every opportunity to discredit Staszewski. “Last year, the prime minister said that I was creating fake news about Poland,” he says.

Strangers online write to him telling him, he says, “that they want to kill me or want to punish me.” Going to the police about threats of that kind can be useless. Police officers in Poland are often homophobic themselves. It is hard being gay in Poland.

In response, the European Parliament recently made a symbolic gesture, declaring the EU an LGBTIQ “Freedom Zone”. The move was a riposte to Poland, Hungary and other member States that insist on discriminating against queer people. The brutal killing of a gay man in Brussels, the homeland of the European court of justice, was another motivating factor.

Despite its symbolic nature, moves of this kind help Staszewski in fighting the cases that have been taken against him. They bolster his argument in courts, he says.

But in reality, this is an arena in which the EU has conspicuously failed to go beyond symbolic moves. An EU-wide non-discriminatory directive that would end discrimination on the grounds of sexual orientation across the 27-nation bloc has been stymied since 2008 by eight European countries, including Germany.

BEHIND THE SCENES AGREEMENT

Rémy Bonny, a young political scientist and researcher from Belgium, who is queer, identifies nationalism and corporate greed as the two most significant obstacles in the way of legal protection for the rights of LGBTIQ people across Europe.

Germany’s tainted position on the issue might seem out of character. But German car manufacturers, the BMW Group and Audi, have large plants on the outskirts of Budapest, the capital of Hungary. There, the autocratic Prime Minister Viktor Orban has successfully fostered a hostile environment for marginalised groups.

In 2019, the New York Times reported that the anti-immigration policies pursued by Orban’s Government have led to a shortage of skilled labourers, prompting German auto-makers to hire “deaf people” to fill skill gaps at their plants. The decision not to provoke Orban may be a strategic one, with German economic interests being given priority.

Rémy Bonny believes that Western European powers have been too soft on the blatant discrimination evident in Poland and Hungary.

“We all know,” Bonny adds, “that behind the scenes, this is the agreement between all of them that if you don’t mingle too much in our local politics, you can have tax cuts for your companies.” 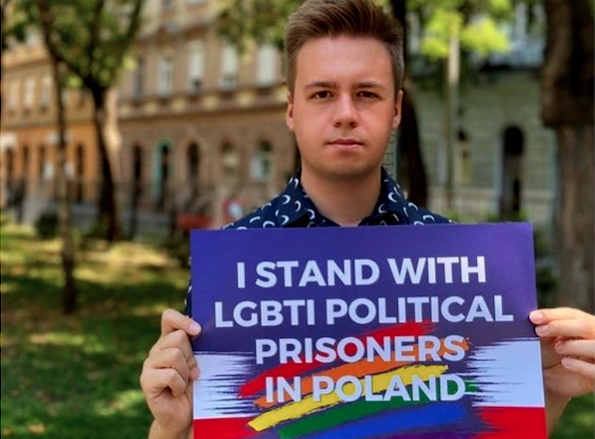 The recent post-crash rise of nationalism, and with it the brutally discriminatory policies of the far-right, have exposed other fault-lines in Europe, with some member states scrambling to please their own, local extremists. They want to turn the tide, Bonny says, on the depiction of the EU as a threat to member states’ national sovereignty and legal autonomy.

That explains why the anti-discrimination directive remains blocked at the European Council. But Bonny believes that the EU now has to show that it has teeth, and is willing to take on those who promote discrimination.

“The European Commission needs to have the guts to do something in these countries,” Bonny says.

Meanwhile, Staszewski, who describes himself as “a citizen of Europe”, argues that Poland cannot afford to leave the bloc.

“Poland will always try to tell the EU that no one can tell us what we can do,” he says.

But the reality may be different.

“They get a lot of money from the European Union,” he says, “especially in the countryside, so the decision can have bigger repercussions. Leaving the EU is the worst thing that can happen to Poland.”

There is a non-discrimination EU Directive for employment, Bonny says. That didn’t stop any Eastern European country from joining the bloc. In a similar vein, he is hoping that the Commission will adopt an EU-wide, legally-binding, hate crime policy to at least protect queer people.

In recent years, Ireland was the subject of an investigation by the European Commission for its lack of proper hate crime legislation, prompting the Department of Justice to introduce a new, comprehensive bill. While it is yet to become law, it demonstrates that the commission has a powerful influence if it uses it.

The planned law not only protects LGBTIQ people against hate crime and hate speech, but for the first time, includes Travellers as a protected group.

THE PRICE OF PERSISTENCE

In Staszewski’s documentary Article 18, a gay man says it is difficult to dream in Poland, especially if your dream involves having a partner and a child.

Leaving behind families, and a country that has proven unsupportive, is a reoccurring theme in Staszewski’s film.  But the film-maker himself is not going anywhere. While his friends, and the subjects of his art, are emigrating, he has stayed put.

Last year, when young people and students took to the streets of Polish cities to fight for women’s right to legal and safe abortion, they also stood up for queer people.

“I felt like we have achieved something,” Staszewski says.

Staszewski joined them, wearing a mask to shield him from potential harassment: it is not uncommon for people to stop him in the streets and denounce him as a “liar”.

“The public TV is the worst propaganda machine that you’d ever see,” says Staszewski.

Earlier this month – just before the European Commission announced its LGBTIQ freedom zone resolution – Staszewski was described as a “liar” on Polish State TV.

His inbox was immediately filled with hate mail. He understands, of course, that his identity as a queer man goes against some of his compatriots’ religious beliefs, and they write to him to blow off steam. But it is unsettling, he says, to have those in power attack you

Despite all of that, for him, to leave Poland would feel like “going backwards.” It would be giving up on dreams of sunnier days for his country.

“There is a price that you have to pay for activism, and I’m willing to pay that,” Bart Staszewski says. “I just want to go forward, I want to fight, and I want to make things happen.”

In the long run, Bart Staszewski might just do that.

A World Shrouded in Darkness And Evil: Hunger, War, Authoritarianism, and the Subversion of Women’s Rights
Paul Mescal among 160 artists condemning plans to overturn Roe v Wade in New York Times ad
Album Review: Ye Vagabonds, Nine Waves
National Maternity Hospital: It Is Time For A Rethink At The Top
As Long As The Guitar Plays: The Rolling Stones and Exile On Main St.
The Hotties: The Results Are In For The Hot Press Readers' Poll 2022