Niamh Campbell discusses her superb debut novel This Happy, a powerful exploration of sex, relationships, and the past’s influence on the present.

Niamh Campbell’s debut novel, This Happy, is yet another example of a young Irish female writer producing outstanding work, though Campbell has long written short stories and essays. Her writing has appeared in The Dublin Review, 3:AM, Banshee, Gorse and Tangerine, with her comedic tale of romantic woes, Love Many, recently receiving a nomination for the Sunday Times Audible Short Story Award 2020.

This Happy follows Alannah as she recounts her relationship with Harry, a married man 20 years her senior, at the age of 23. Meanwhile, the novel also tracks her relationship with another man, whom she eventually marries. Though Alannah is no victim, she brings a volatility to her romantic connections without repentance, becoming addicted to her sexual power over both men.

The brutally honest examination of Alannah’s flawed motivations will no doubt lead to comparisons between Campbell and fellow young Irish writers Naoise Dolan and Sally Rooney. The book’s erotically-charged moments have a similar feel to the hit TV adaptation of Rooney’s Normal People - which became a visceral example of how sex can display the internal workings of the mind.

“I really enjoyed Normal People,” says Campbell. “I loved the Lenny Abrahamson episodes in lockdown and their total lack of shame. It was like going back and imagining my college experience as a nicer time than it really was - it was nostalgic for anyone who came of age in Ireland in the noughties.

“I remember when Conversations With Friends came out, around the time that I was writing the first draft of this book. The rise of Sally Rooney completely changed the publishing landscape. Suddenly, the ‘young Irish female writer’ was marketable out of nowhere.”

Still, Campbell notes that marketing within the publishing industry can be very reductive.

“Ultimately, I don’t mind the comparison on a purely pragmatic level - it gets me noticed,” she says. “Some people might open it expecting Normal People, and may be surprised at how my view of the world is a bit darker. I think that if Exciting Times had come out first, there’s a possibility that we would all be referred to as ‘the new Naoise Dolan’ - it’s just a matter of staggering the time.”

Normal People has further helped erode conservative Irish society’s sense of shame and stigma around sex. Similarly, lust can often expose the moral misjudgements of the characters and where their true vulnerabilities lie in This Happy. The inclusion of such frank and unapologetic sex scenes may cause some readers to label them as “transgressive” - would Campbell agree?

“I wouldn’t use that word to describe these scenes,” she says. “Sex written very frankly from a female perspective can appear transgressive - not just in Ireland. I’m so interested in writing sex into literature, with lust as a genuine motivation for people’s behaviour. There’s a lust that comes from power: power is sexy. There’s a sexual thrill that comes from pursuing anything, so I see the libido as being this generalised thing.

“Alannah’s sexual attachment to both of these men is very powerful. It was important for me to write a female character with an appetite for sex, which is tied into the idea of power. It’s so easy to get nominated for the Bad Sex in Fiction Award or accused of being pervy, and I actually cut a lot of sex scenes out of the book. I consider it to be pretty puritanical now based on what it was before, but writing about sex can be tricky.”

The mixed reactions to Alannah have been “thrilling” for Campbell, with many readers seemingly torn as to whether to offer her sympathy, or to see her as a villain.

“I think that she’s very used to being ignored,” says Campbell. “Most of the time, people look the other way and she’s very lonely. She’s got this intense personality, but she doesn’t get a lot of attention from others. So when she finds this attention from Harry on a sexual basis, she just runs with it and becomes addicted.

“I really didn’t want her to be a villain, I wanted her to be real. That would require showing what I think is the power struggles of heterosexual relationships in particular. I also wanted to bring in a sneaky Anglo-Irish relations vibe, because I come from an Irish Studies background.”

“It was this idea about complicity and weakness within the power struggle; Alannah goes from initially being quite impressionable to quite conniving. I was writing someone who wasn’t going to let a negative experience happen to her again. If somebody is very wounded in their early life, they can be a dangerous person.

“I didn’t want Alannah to be likeable...but I certainly never intended for her to be monstrous. I think if she was a man, I’d imagine now that her character would be judged a lot more harshly as an abusive person.”

Many readers may wonder if the novel’s protagonist is based around the author’s own life experiences, but Campbell insists that there is very little autobiographical about the book.

“When I was developing her, I considered Alannah to be the most concentrated version of the worst parts of me explored in a person,” she says. “There are actually no consequences for this character, so she acts on wild impulses, because she doesn’t need to have them checked. I used my experiences from my twenties to link up the two lead male roles in extremes. (Laughs) I didn’t have an affair with a married man, though!”

• This Happy is out now, published by W&N. 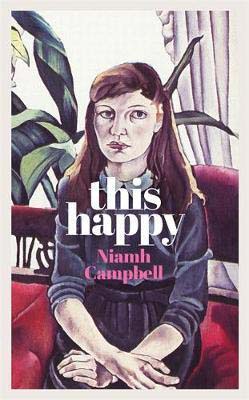