Music Network Delivers a Brilliant Night of Jazz at The Mermaid
Airelle Besson, Sebastian Sternal and Jonas Burgwinkel Trio at the Sugar Club

We sent Hot Press illustrator, and guitar-toting musician David Rooney to see the Airelle Besson, Sebastian Sternal & Jonas Burgwinkel Trio at the Mermaid Arts Centre in Bray. This is what he found…

The crowd is gathering at Bray’s Mermaid Theatre when I meet up with my accomplice for the evening, Irish jazz guitar legend, Tommy Halferty.

Given the task of reviewing instead of drawing by the editor, I'd thought it wise to call in some back-up. Remarkably, it turns out that Tommy taught Airelle Besson, the trumpet player in this evening’s trio, many years ago in Paris. “Where she shone like a star,” Tommy recalls.

The show begins with ‘Magnolia’ and already one senses that there’s a treat is in store. Delicate trumpet lines build and are harmonised so perfectly by the accompanying piano that I find myself searching the stage floor for an octave pedal or harmoniser for the horn. No sign. The drums sound full, flat and real… and already the indications are that percussion is going to be an aural and visual feast: Jonas Burgwinkel’s array of rattlebags, shakers and dampening devices are clearly visible thanks to his side-on stage positioning.

The first set develops through pieces of sweet and sour tumbling chords and delicate patterns from Sebastian Sternal’s piano, all the time responding to and acting on the prompts of Besson’s trumpet, which never seems to want to take centre stage but instead, like a consummate conversationalist, keeps the chat moving. The cumulative effect is spell-binding.

Ever inventive and playful, the idea of humour may seem rare in the jazz world, but more than once and perhaps to the surprise of some of the more hardcore jazz audience, you really get a sense that all we’re missing is a classic Looney Tunes cartoon. No sooner than this idea has materialised, however, than Sternal swaps the grand for the Rhodes and the bass lines we have been denied, in a typical trio, are provided with a tremolo-like effect in 'For W’; and in the closing number before the interval in a low valve amp-driven riff that has echoes of Stevie Wonder about it. ‘The Painter and Boxer’ ends in pugilistic form, with Burgwinkel hammering out a ferocious response to both Besson’s trumpet lines and the bass grooves offered by Sternal. We didn’t see that coming. The bell goes… 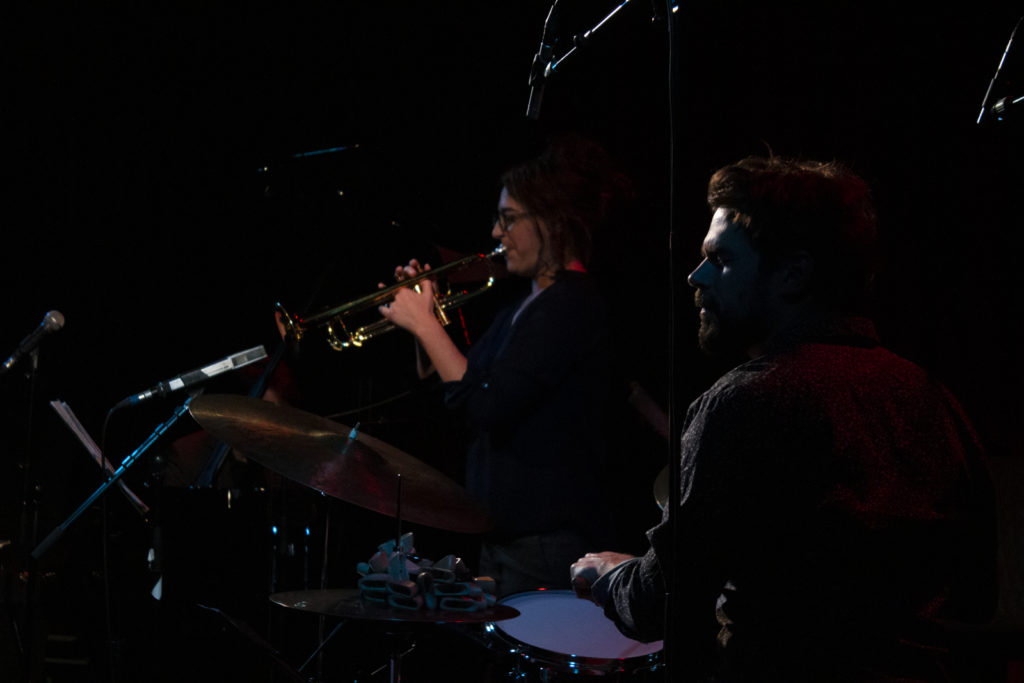 At the interval Tommy shines some light on the differences between European Jazz and it’s American cousin, where ‘Theme, solos…theme’ was the dominant feature. The European approach, where playing together offers simultaneous and spontaneous textures made up of multiple improvisations, is on display this evening.

The Music Network programme, with a foreword by Lyric FM’s former ‘Blue of the Night’ presenter, Carl Corcoran, quotes Besson. “Each time we create something new. Jonas is a musical drummer – he plays so colourfully and creates many sounds on his drums – a percussive way of playing while Sebastian creates such beautiful harmonic pictures – so rich, so precious, so refined.”

The second movement builds on what went before but, now that we have an idea what to expect, there is a real relish to it. So, by the time Sternal switches from piano to Rhodes, we understand where this might ‘Go’… and indeed that is the name of the piece. There’s insane bass lines on keys, and harder drums, with Besson blowing a storm above: I couldn’t help feeling that the cacophonous herring gulls down in Bray Harbour are missing a treat. This is followed by another teasingly animated track, written by Sternal, called ‘Sand’; and a sweet, melancholic composition by Besson that offers more complex melodic lines, gorgeous piano chords peppered with off-kilter high note patterns and a complex array of reserved percussive backing.

All of which sets us up for another almighty pummelling in the closing piece. My only wish here was that I could have spirited into some of the empty seats the jazz doubters I have in my circle, many of them music lovers. It is epic. Writing in the dark, I scrawl… “Mermaid will need to get the piano turner in tomorrow.”

Circling high above and then dipping into the maelstrom, Besson soars and dives, while Sternal – whose piano alternates between lightening and thunder – challenges Burgwinkel to respond to the percussion debate. It’s a perfect foil for Besson’s trumpet: like a shearwater, she allows her instinct to guide her, gliding a wingbeat above the heaving seas.

We leave the Mermaid well satiated. 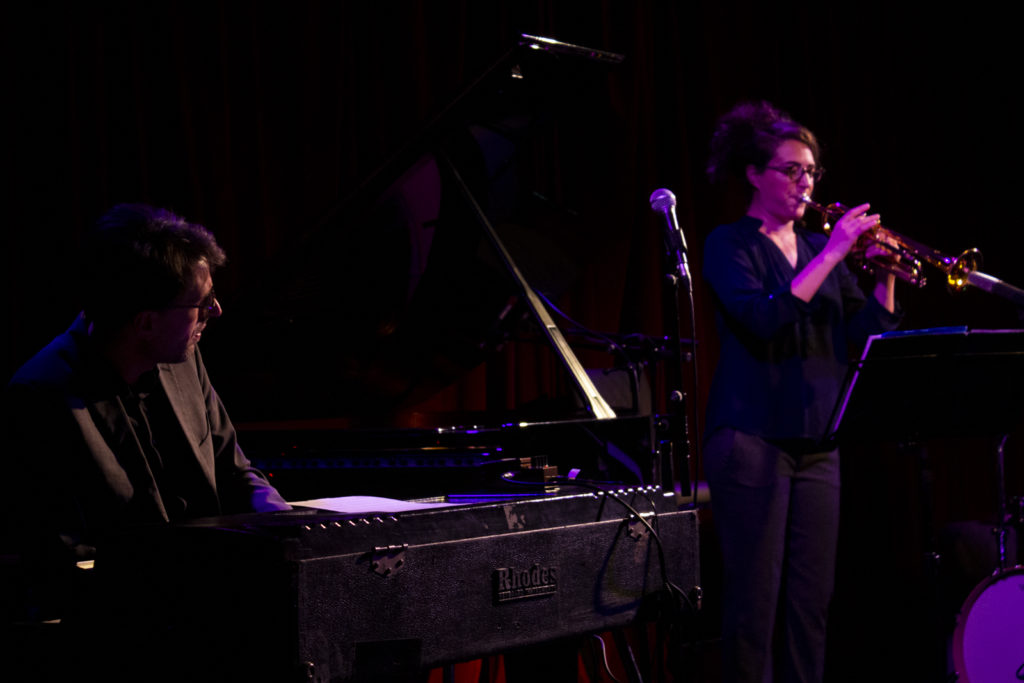