Stuart Clark got to see the stained-glass window that had the lyrics to 'Zombie' on it!

"The Cranberries' U.S. Coup" pronounced the headline that accompanied Dolores O'Riordan's first January 1994 appearance on the Hot Press cover, Dolores lying in front of a Stars 'N' Stripes with her hair newly cropped and covered by a beanie hat. Inside, she admitted to our man Joe Jackson that she was still trying to process the scale of the Cranberries' Stateside success. It was only a matter of months before Dolores was on the HP cover again, this time sporting a very glam peroxide 'do which suggested that she was adapting very nicely, thank you, to rock star life.
We shouldn't have favourites but we do love the 2000 cover which found Dolores donning a 'Psychobitch' t-shirt for her photo-shoot, which took place in her Kilmallock stud farm home. 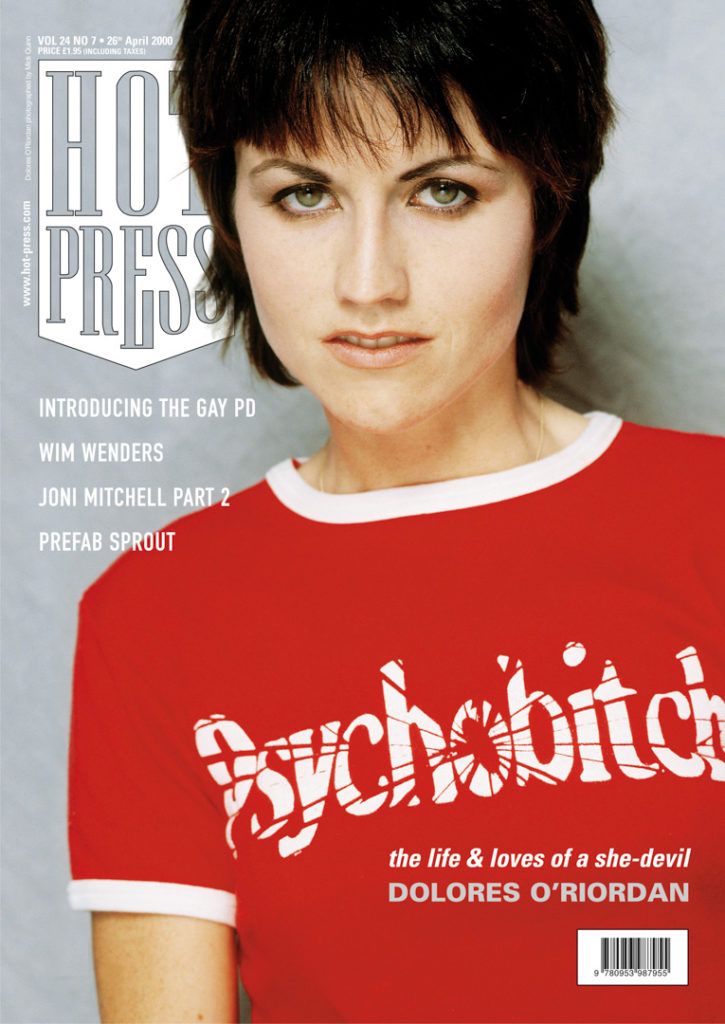 
"I remember her faux-berating us for turning up late - we got stuck behind a combine harvester - and then disappearing off into the kitchen to make us breakfast," our man Stuart Clark recalls. "While she was doing that, her then husband, Don, gave us a guided tour of the house which had its own 'Wild West' room, the centrepiece of which was a vintage wood bar stacked high with rare American whiskey and bourbon barrels that they'd had flown over. Instead of seats, the stools lined up in front of the bar had saddles. Outside, you could see the Harleys and quad bikes that Dolores loved zipping around the estate on. Being a self-confessed pizza nut, she'd also flown in a wood-fired pizza oven from Rome! Best of all, though, in terms of rock star indulgence was the stained glass window in the hallway that had the lyrics to 'Zombie' on it. That her fame bore a price was evidenced by the security guards patrolling the estate in golf buggies, with baseball bats discreetly tucked under the seats. At the time, Dolores and Don were dealing with a stalker and "other threats" that she didn't want to go into. My overriding memory of that day, though, are of lots of laughs - Dolores had a wicked sense of humour - and heading back up to Dublin knowing that we had a great interview in the bag."
Rarer than hen's teeth are copies of the Cranberries Hot Press Collectors' Series issue - we've seen 'em changing hands online for upwards of €300 - which included extensive interviews with Dolores, Noel, Mike and Ferg who gave us access to their personal archives. We'll be sharing some of the goodies included in it over the next few days on hotpress.com.
Share This Article:

Remembering Dolores O'Riordan: Our 2018 Tribute To The Irish Icon
The Cranberries: On Falling In Love With Dolores
Louis Walsh and Noel Hogan from the Cranberries join the Hot Press Xmas Round Table

An Post releases stamps themed after Irish musicians
Stunning Dolores O'Riordan mural goes up in Limerick
On this day in 1994: The Cranberries release No Need To Argue
The Cranberries talk about how they fell in love with Dolores O'Riordan in the new Hot Press
The Cranberries To Be Honoured With Stamp + Noel Hogan Reveals Documentary Plans
REMEMBERING DOLORES: The formative years and recording Everybody Else Is Doing It, So Why Can’t We?
We use cookies to ensure you get the best experience on our web site - by using this web site you consent to our use of cookies. Read more »