Alongside Graham Murphy and Alec Brown, Langford has blended modern production with ancient song on this festive release.

Limerick based folk singer-songwriter, Emma Langford, has recorded a breath-taking bilingual version of 'The Wexford Carol' for RTÉ's Christmas at the Castle show, releasing as a single tomorrow, December 8. Hot Press are delighted to premiere the single below.

Thought to be one of the oldest surviving carols, 'The Wexford Carol' can be dated as far back as 1684.

Forming part of Bishop Waddings of Ferns’ famous Kilmore Carols collection, the track would have traditionally been sung by an all-male choir, however, in recent years artists such as Loreena McKennitt, Alison Krauss, and Cara Dillon have all recorded versions of it, with Emma Langford now adding her name to the roster.

Murphy's keys twinkle in an understated manner - not grabbing all of the listeners attention, but backing up the vocal in a fantastically simple way. Much the same can be said for Brown's cello performance, although the deep bellowing notes do steal the ear from time to time.

Emma was approached by RTÉ to add her own spin to the song as part of their Christmas at the Castle broadcast - an annual celebration of much loved Christmas songs recorded for TV in the beautiful surrounds of Dublin Castle. 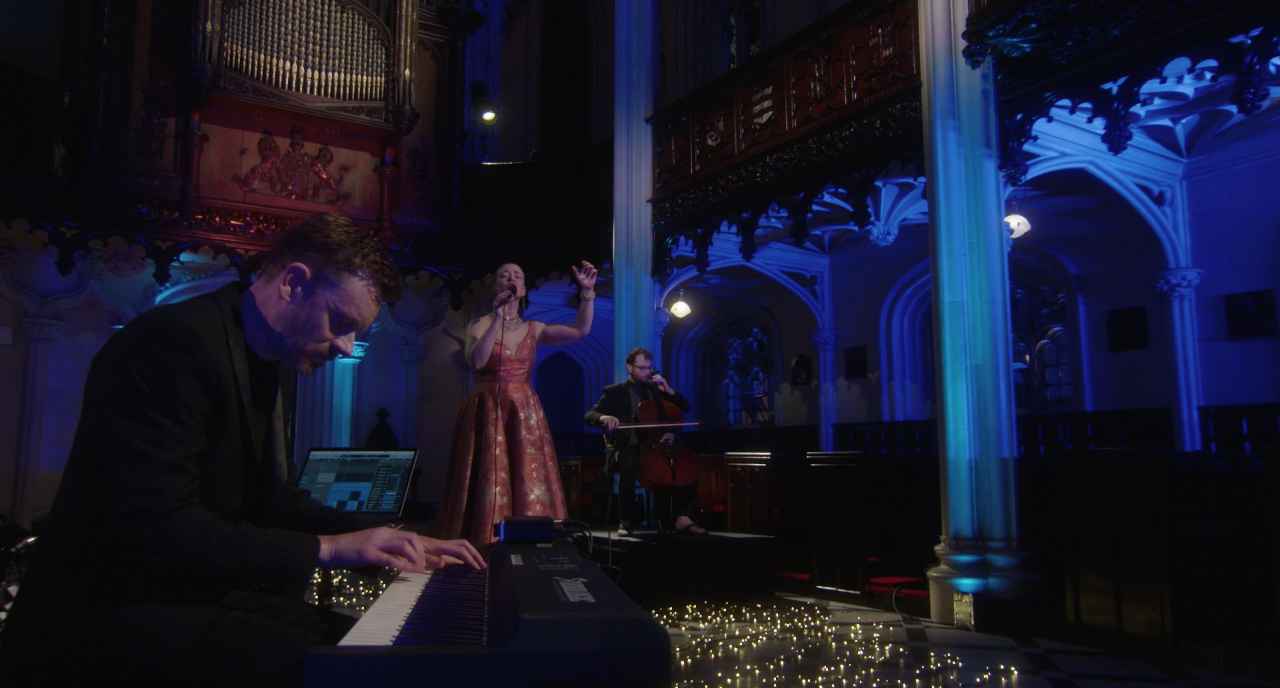 Emma, Graham and Alec at the recording of Christmas at the Castle

Langford first encountered 'The Wexford Carol' during her time with the vocal trio, Sionna, with whom she performed for a number of years following her undergraduate degree at the Irish World Academy of Music and Dance in Limerick.

During this time, she developed a fondness for the track.

“I was asked to create a bi-lingual spin on the old Irish classic, so I got to work figuring out how best to combine English and Irish without distracting too much from the song itself," Langford reminisced. "Graham Murphy joined me on keys then, creating an atmosphere that is just hauntingly beautiful. I can only describe him as a musical genius – he forms one half of The Production Suite, who have produced most of my releases. Together we came up with the sound you'll hear on this release – a perfect marriage of ancient tradition and modern production.”

Emma is also joined by her long-time collaborator Dr. Alec Brown, who's understated cello adds its own touch of magic to the track.

The singer drew inspiration from the likes of Sinéad O'Connor, Enya, and Eimear Quinn for the piece.

“It’s a beautiful re-telling of the nativity, and I wanted to capture the sensitivity, emotion and purity of voice I love in so many other vocal performances along these lines," the singer added.

Emma, Alec and Graham can be seen performing 'The Wexford Carol' live in The Chapel Royal in Dublin Castle on RTÉ on Christmas Eve and Christmas Day, however, Langford revealed she thought the arrangement was “too beautiful not to record and release as a single," and so it shall release on December 8.

The trio recruited the help of recording engineer Ben Wanders and met in his studio in Limerick City to re-capture the magic. The track was then mixed and produced by Graham Murphy and Chris O'Brien of The Production Suite, Dublin.

Check out the premiere of Emma Langford's 'The Wexford Carol' below.

National Concert Hall and ITMA announce ‘Drawing From The Well’ concert celebrating traditional Irish music
Ozzy Osbourne reacts to Grammy wins: "I was blessed to work with some of the greatest musicians in the world"
Slowthai drops fan-focused video for 'Feel Good'
Pulp will be supported in Dublin by Richard Hawley and The Orielles
Hot For 2023 Irish Acts: Love Command 0
Guests at DARE TO SHARE Galway with Paddy's Share (Photos)