Picture This launched their brand-new album MDRN LV yesterday with a special performance from The Empire State Building in New York City. The launch included a one hour special in association with The Eoghan McDermott Show on RTE 2FM, which will be broadcast today, Thursday, February 14 plus an acoustic performance from the 86th Floor Observatory level where they performed their hit 'Take My Hand' to global media and fans.

MDRN LV, the new album, is set to be released this Friday, February 15, 2019. Produced by Jayson Dezuzio [Imagine Dragons, X Ambassadors], the record represents a creative high watermark for the quartet as they expand their signature style and venture into uncharted sonic territory. The new album includes the current single 'One Drink' plus two previously released instant-grat tracks 'Everything Or Nothing' and 'If You Wanna Be Loved'. 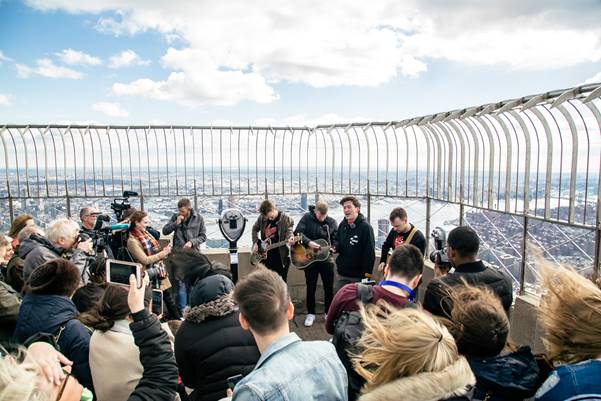 The biggest act in Ireland and the nation’s hottest musical export in decades, Picture This arrived as a phenomenon with their self-titled 2017 full-length debut, Picture This. Certified triple-platinum in Ireland, it held the #1 spot in the Irish Album Chart for four weeks, while topping the Streaming Chart for seven weeks. Moreover, it has been the most streamed album by an Irish act for two years in a row. Nearly three years since their formation, they’ve impressively sold over 300K tickets, concluding 2018 with the announcement of a five-night residency in Dublin’s 3Arena for this March. All five nights have subsequently sold out.

Picture This also grace the cover of the latest issue of Hot Press. You can buy it here:

PREMIERE: Galway rapper KY shares video for new single 'Foreign'
Jafaris unveils new single 'Haunted'
Over 500 live events workers gather in solidarity at Belfast's Custom House Square
Justin Bieber, Chance The Rapper and Run The Jewels dominate the Official Irish Charts
On this day in 1980: Led Zeppelin drummer John Bonham died, aged 32
The Paper Kites enlist Rosie Carney for 'By My Side'
We use cookies to ensure you get the best experience on our web site - by using this web site you consent to our use of cookies. Read more »