On this day in 1991: Nirvana release 'Smells Like Teen Spirit'
The Hot Press Newsdesk

29 years ago today, Nirvana released their classic single, 'Smells Like Teen Spirit', ahead of their second album Nevermind. To mark the occasion, we're revisiting Peter Murphy's reflections on the legacy of the iconic band, originally published in Hot Press in 2003.

To hear Kurt Cobain singing ‘You Know You’re Right’ on radio or MTV this winter was to witness Banquo’s ghost showing up at the Headbanger’s Ball looking for his voice back from the likes of Nickleback and Puddle Of Mudd and The Vines.

Granted, Nirvana themselves were not the most original band in the world so much as a meld of vintage UK punk 45s, ’80s straight-edge, itchy ’n’ scratchy Amerindie acts and melanchoholics like The Replacements. As Dave Grohl pointed out in these pages a few weeks ago, it could’ve happened to anyone: Hüsker Dü, Jane’s Addiction, The Pixies.

But it didn’t. It happened to Nirvana, in one of those once-a-decade package deals. The band had no real successors, mainly because their music was made luminous by the kind of spirit that doesn’t show up on a Xerox machine. Post Nevermind, the trio became one of the most cloned acts of the era, but the second X-generational acts who sounded most like them were least capable of tapping into their primal, Stooge-like thrust.

“I was getting tapes from bands that didn’t sound remotely like the Pumpkins or Nirvana, and (record companies) thought that I could somehow transform their artist into that sound,” remembers producer Butch Vig. “It was ludicrous in some ways.”

So, American hard rock in the ’90s was distinguished, if that’s the word, by depressingly generic recycling enterprises. Any major band spawns tadpoles of course, but post-grunge acts like Silverchair and Stone Temple Pilots and Fred Durst’s cabal of dullards and the Green Day/Blink 182 pension plan punks were the bottom of the barrel, mainly because they were copping off bands who themselves were revisionaries. It was a sort of musical inbreeding programme resulting in a whole slew of tattooed, short-trousered yokels, a gob-smacking number of whom lucked into platinum discs.

That said, the further we got from Kurt’s death, the more bands you could find mining Nirvana’s molten soul rather than merely aping their vital statistics. For example, At The Drive-In, And You Shall Know Us By The Trail Of Dead and Queens Of The Stone Age, the latter boasting direct Cobain connections via Dave Grohl and Mark Lanegan. As Queens’ singer Josh Homme explains, the crucial difference is being able to differentiate between the logo and the logos.

“You’re talking about bands that are pursuing the identical idea (as us): to play something they’re passionate about,” he says. “They realise the obligation that, if you’re lucky enough to be a musician, you better go as far out as you can go, don’t give me this half-assed crap, this homogenised two per cent milk. So we all have the same idea, it’s strangely close, but none of us sound the same. I think too much of the time people get caught on the example and not the idea. Calculus is an example of complex problem solving: separate, put in order of priority, and then put in a list of operations on how to solve it. (But) it’s not really the fuckin’ numbers; what I’m trying to explain to you is the idea.”

‘You Know You’re Right’ seemed illuminated from the inside by that idea; that spirit, that logos, whatever you want to call it. Hearing it for the first time was a minor shock, because spend any time away from a Nirvana record and unknown to oneself, you start to think of them in Reader’s Digest terms: “Oh yeah, Nirvana: loud/quiet, Kurt yowling, big drums, heroin, suicide, plaid shirts.” But ‘You Know You’re Right’ rejoiced in contradictions. It served both the band’s FM tendencies (big chorus, even bigger dynamic shifts) and their contrary aspects (a lame dog verse melody, dissonant Sonic Youth style guitar noises). Strangest of all, the whole thing seemed based around a chord progression almost as gnarled as the ‘Louie Louie’ figure on which ‘Teen Spirit’ was built.

The legal row over whether to put the song on a box set, as advocated by Krist and Dave, or to maximise its commercial potential by sticking it on a Best Of package, as prescribed by Courtney , represented Nirvana’s ethical conflicts in a microcosm: were they The Beatles or Shonen Knife? Sonic Youth or Cheap Trick?

Of course, the answer was/is all these and more. The hardcore Nerdvana brigade often profess In Utero the band’s masterpiece, the truest recorded representation of its sound via Steve Albini’s ribbon mics, but Nevermind was a more subversive record because it was more popular, a Trojan horse lesson in punk entryism. Even now, hearing a song like ‘In Bloom’ on the radio remains a Hamlet moment.

But even more than that, you can trace the various fringe developments in American rock ’n’ roll over the last 10 years by looking through the prism of Nirvana’s recorded legacy. After all, they had a ’60s garage band heritage to rival Detroit in the form of local Seattle heroes The Sonics and The Kingsmen – the 1990 single ‘Sliver’ or their cover of ‘The Vaselines’ ‘Molly’s Lips’ still slot right in beside The Hives, Ash and The White Stripes, while the posthumous Unplugged album revealed strange affinities with Neil Young and the alt-country/Now That’s What I Call Harry Smith Vol 5 lot.

So where does that leave us?

Well, Pearl Jam and Foo Fighters have manoeuvred themselves into comfortable holding patterns just as two of the more mercurial grunge alumni are preparing to relaunch. Billy Corgan has just signed his new band Zwan to Reprise, while Courtney Love has disbanded Hole, aborted Bastard, and is starting again on Alan McGee’s Poptones label. Meanwhile Butch Vig kept busy over his summer sick leave from Garbage by co-producing California punkers AFI, an outfit he reckons have the most kinetic relationship with their audience since Nirvana. 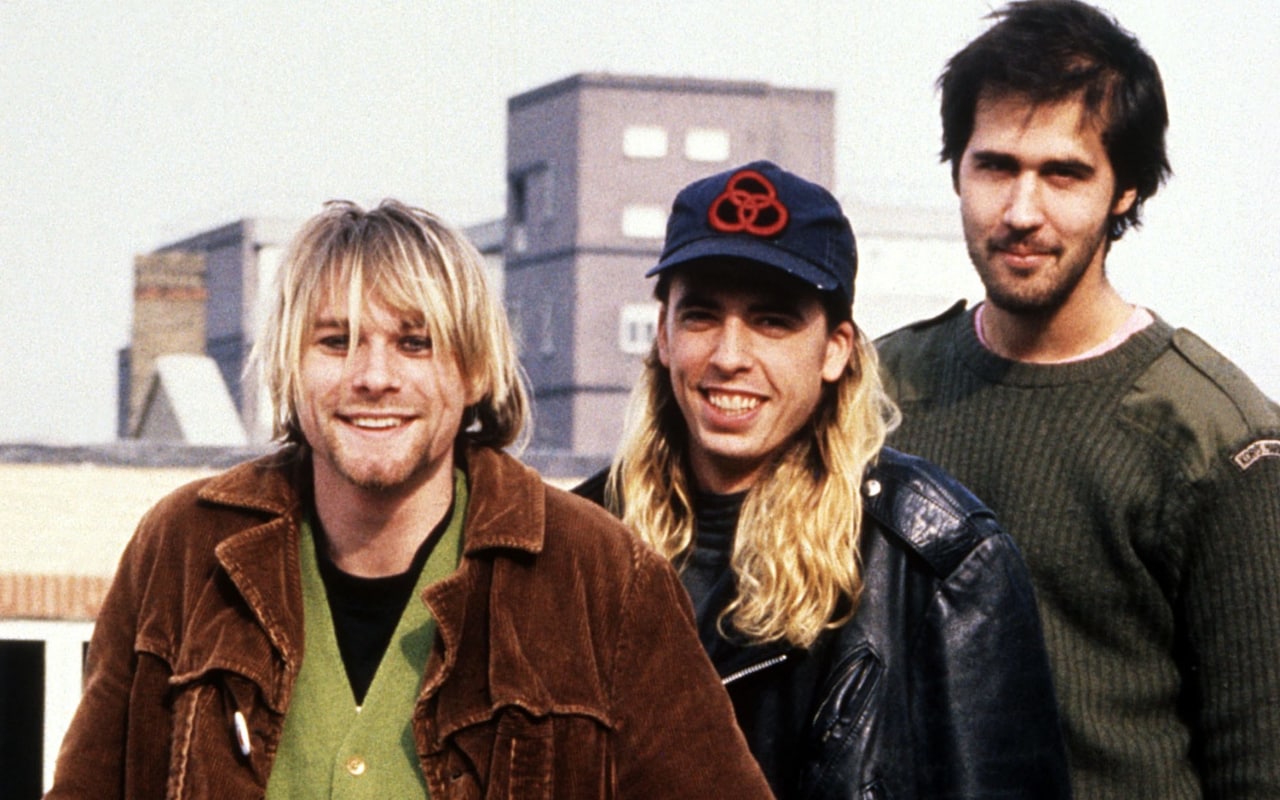 2. ‘Smells Like Teen Spirit’
Forget about generational touchstones, Kurt, Krist and Dave thought they were running through a nifty new joke tune that sounded like The Pixies playing ‘Louie Louie’ crossed with Boston’s ‘More Than A Feeling’. When producer Butch Vig heard them practising it, he got so excited all he could do was pace the room incessantly. They nailed it in Studio A, Sound City, Van Nuys. It was released on September 10, 1991. You know the rest.

3. Reading Festival, August 30, 1992
Rumours abounded: Kurt was a junkie; the band was on the verge of splitting; Kurt was dead. Cobain responded by coming onstage in a wheelchair and the band played what many regarded as one of their finest sets, topping a bill that included hand-picked acts like L7, Pavement, The Melvins and . . . Bjorn Again (!).

4. Recording Unplugged
November 18 1993. Many insiders in the Nirvana camp predicted that the band were a spent force, plagued by in-fighting, exhaustion and Cobain’s heroin habit. Nobody anticipated that they would morph into a weird alt-country band for Unplugged, opening a realm of musical possibilities that would never be explored.

5. ‘You Know You’re Right’
September 2002. More than eight years after Kurt Cobain’s death, that voice haunted the airwaves again, like kryptonite rendering leaden the endless fourth rate grunge clones clogging up what was left of the ‘alternative’ US scene. The publication of Cobain’s Journals filled in the rest of the blanks, revealing the singer as alternately neurotic, guilt racked, morbidly funny, dry, but even in his doldrums, conscious.