“This is a magical country and a magical place.” Guitarist John Frusciante reunites with Irish RHCP fans in Marlay Park on Wednesday night. The band ups the ante with a new and nostalgic setlist, alongside shining support from Thundercat & Anderson. Paak and the Free Nationals.

Signifying the start of Red Hot Chili Peppers’ riotous show at Marlay Park, their intro jam covets a warm embrace from John Frusciante himself. It’s been fifteen years since Reading and Leeds 2007, fifteen years since the blithe guitarist last toured Europe as part of the band – and an integral part he proved to be. They fit him right back in like a missing puzzle piece.

With Frusciante to the left of Anthony Kiedis and Flea doing cartwheels in a floor-length skirt, everything is in its rightful place for the Chili Peppers. 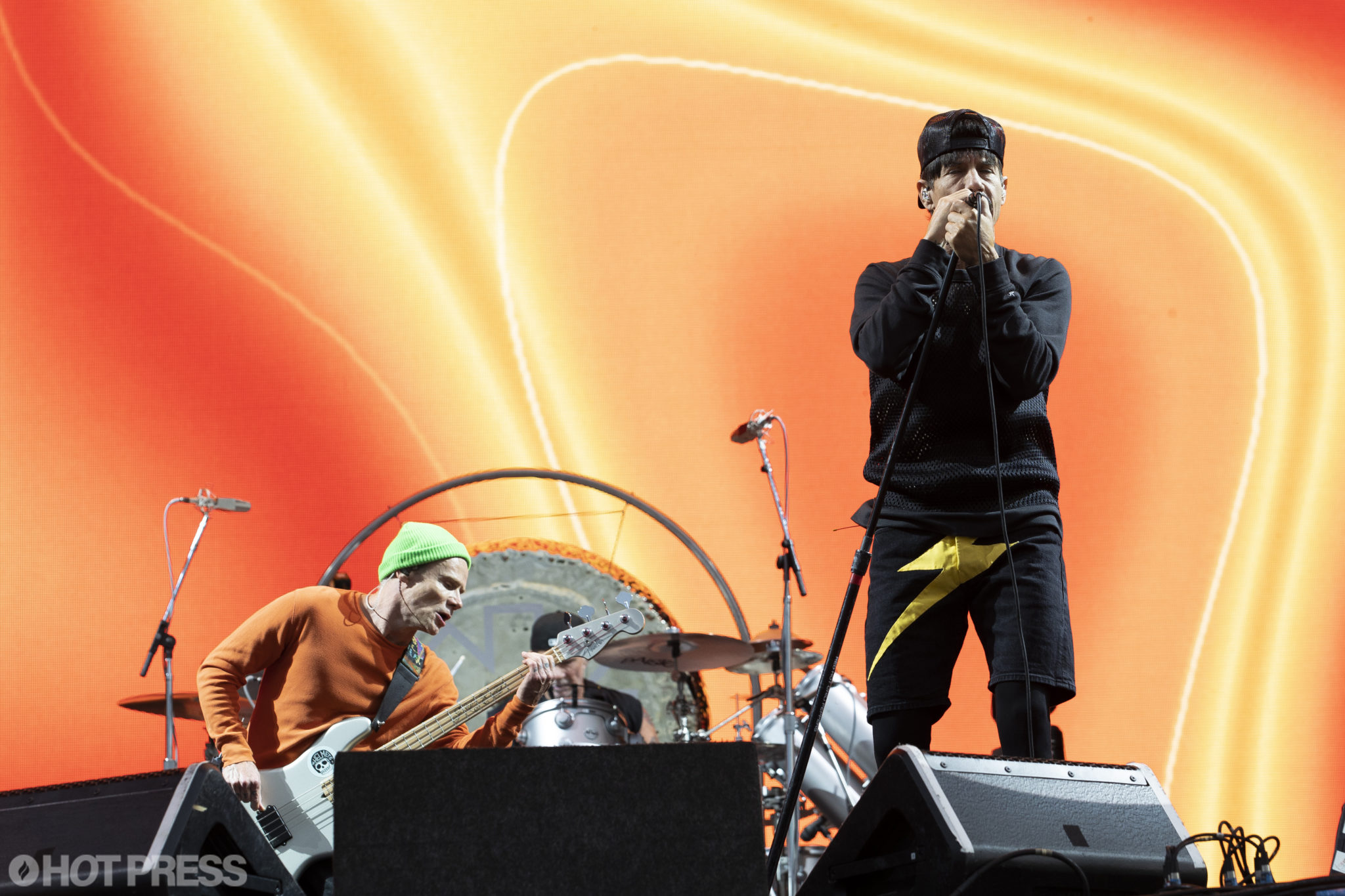 Before the Peppers take their places onstage, Thundercat amps up energy as the first support act of the night. Singing into a golden microphone, the syncopated frontman led a set infused with liquid funk, carried by a grounding six-string bass you could feel right through your bones.

Anderson .Paak and the Free Nationals emerge to the rally of a trumpet cry, .Paak taking a wide-legged seat behind the drums for ‘Heart Don’t Stand A Chance.’ He’s a born star no matter where the spotlight falls. He struts and glides across the stage floor like a reborn Jagger, yet he shines behind the drum kit. His kinetic energy radiates from his sticks to the crowd, breezing through a short, saturated setlist of freakishly groovy hits, leaving us just enough time to catch our breath before the main event.

With the exception of a few Unlimited Love additions, the night feels like a nostalgia trip. The Red Hot Chili Peppers seem to have rejected the wear and tear of rock ‘n’ roll and instead embraced the youthful energy of rock dads you wouldn’t mind picking you up from school. 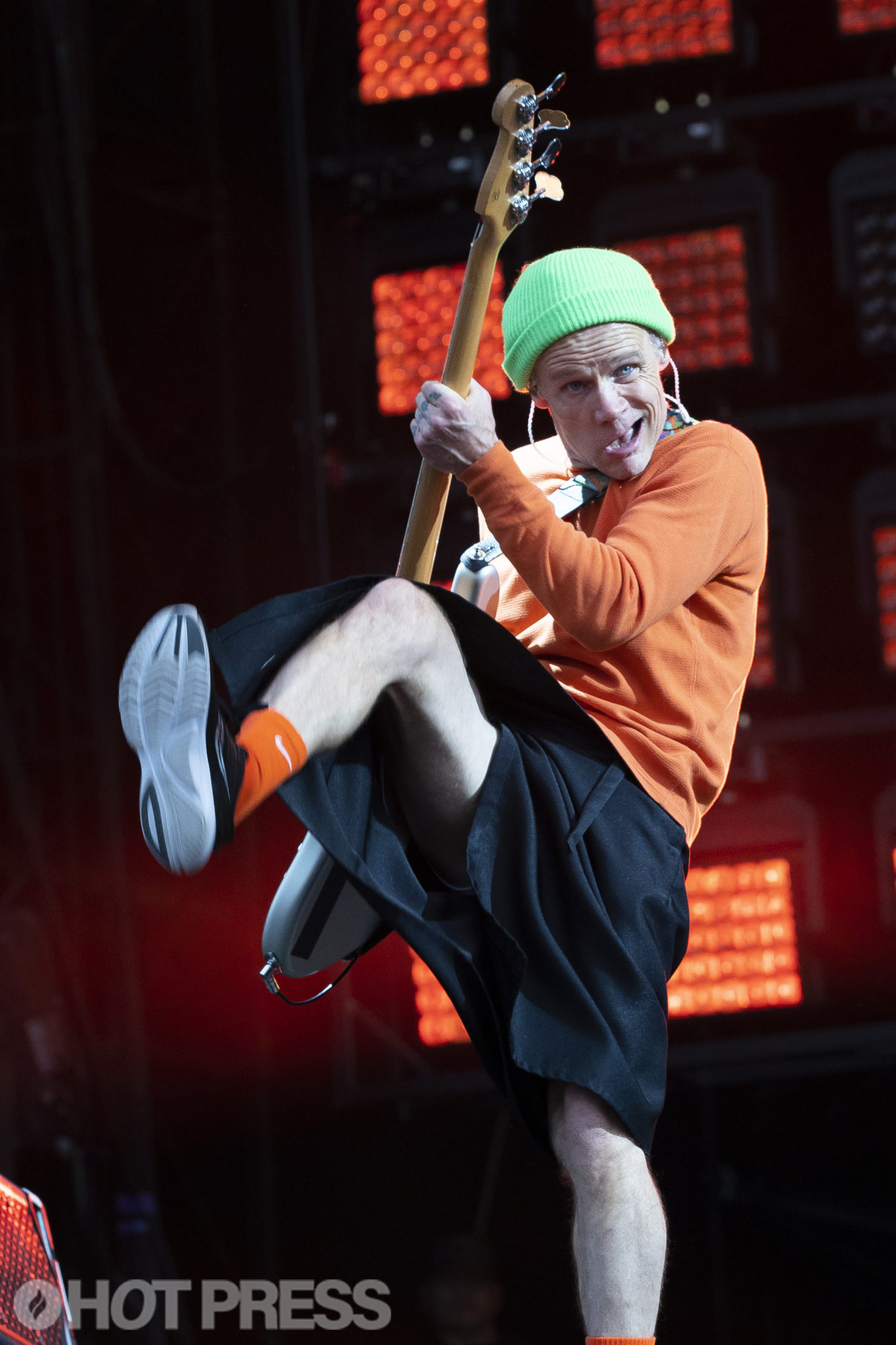 Flea is wilder for wear, hyperactively sprinting about the stage. Kiedis is eventually shirtless, Chad Smith lost in an affair with his drum set – you’ll never see one man love an instrument as intensely. Frusciante is simply having a blast, taking his time as the driving force in RHCP’s infamous choruses. He’s making it last.

The clock strikes nine and then rolls back twenty years as the addictive intro riff of ‘Can’t Stop’ sends the audience soaring. With its pumped-up verses and catchy guitar hook, the Pepper’s most-streamed track really carries itself – but their crowd is willingly along for the ride.

It’s in this way that the relationship between this band and their fanbase was built: on simple pleasures. The minuscule ecstasies of life, like jamming on your friend’s shoulders to a heavy-hitting guitar hook of the 2003 hit single or absolutely losing your mind when ‘Dani California’ succeeds. 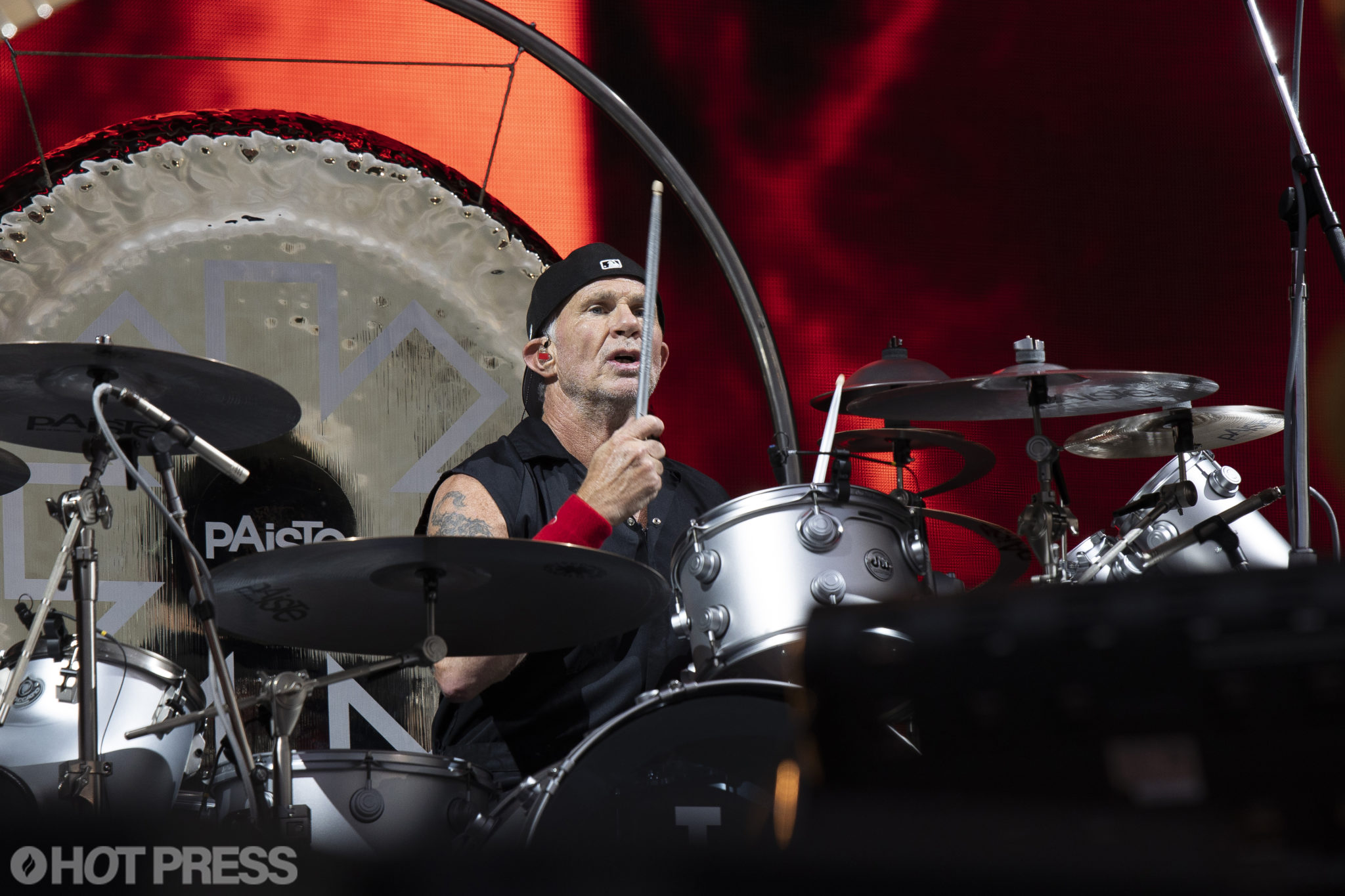 Everything that keeps RHCP great was once predicted with ‘Dani California.’ Smith’s drumwork encapsulates rock without verging on basic, while Frusciante’s echoing backing vocals enable the ‘stached frontman’s lyrical work to roll on.

The band bring back neo-psychedelia for ‘Universally Speaking’ and ‘These Are The Ways,’ as Frusciante’s finespun, alt-rock guitarwork meets Flea’s usual slap storm bass playing. He takes a more subtle turn on ‘If You Have To Ask,’ reverting to his funky, seductive bass licks, sublimely paired with Frusciante’s seductive guitar. “Add a little lust to the funky-ass Flea bass,” sings Keidis in his raspy baritone, sending off a coy look.

With its instantly recognisable, spiralling intro riff, ‘Snow ((Hey Oh))’ lays down a rough, rockier edge for the carefree, at-ease disposition of the band. The guitarist’s swallowing guitar riff files smoothly into a rolling chorus, where Keidis’ vocals ride the wave of “Hey, ohs” and “Whoa, whoa, whoas.”

Frusciante and Flea are a fiery duo throughout the show’s entirety, but especially on ‘Nobody Weird Like Me.’ It’s harder for a force like Flea to tone it down than to amp it up, but he manages well for the sake of the song, saving room for Frusciante to weave around the smooth bassline with his warped, grabby guitar hooks. 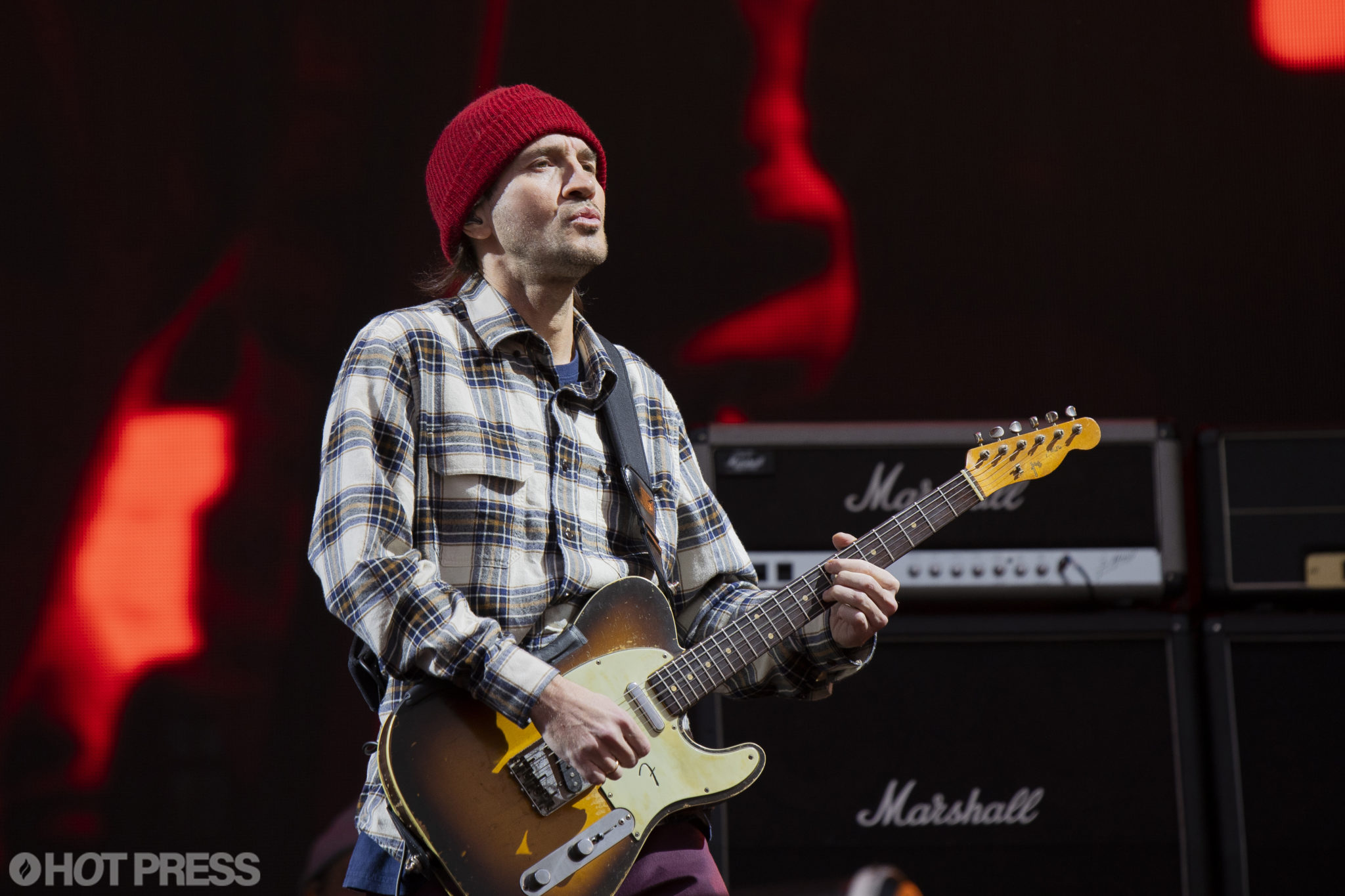 ‘Whatchu Thinkin’’ is one of the new ones, quickly becoming one of the good ones. Arguably the most fun moment on Unlimited Love, elevated by Frusciante’s statically charged guitar solo. Kiedis rides the beat of Flea’s undulating bassline, and the whole thing is one golden, dizzy picture as the sun takes its time setting behind the stage.

The crowd delights in bits of funk rock rhythm of ‘Suck My Kiss’ at the hands of the band’s string weavers. Thirty years since the track’s release, you’d think the Pepper’s vocalist would be tired of feigning a freestyle – yet Keidis’ vocals are as fresh as ever and as fun and imperfect as they were in the ‘90s.

“This band is, like, 155 percent Irish,” Keidis jokes. “I love the quarter of Flea that’s Irish. The rest can fuck off.”

Teased with the intro keys of Elton John’s ‘Your Song,’ the band diverts and jumps instead, head-on, into ‘Hard To Concentrate.’ The short span of silence between ‘Black Summer’ – proving that RHCP still got it, “it” being their eternally summer sound – and ‘Californication’ is filled with “Olè” chants from their Dublin audience. 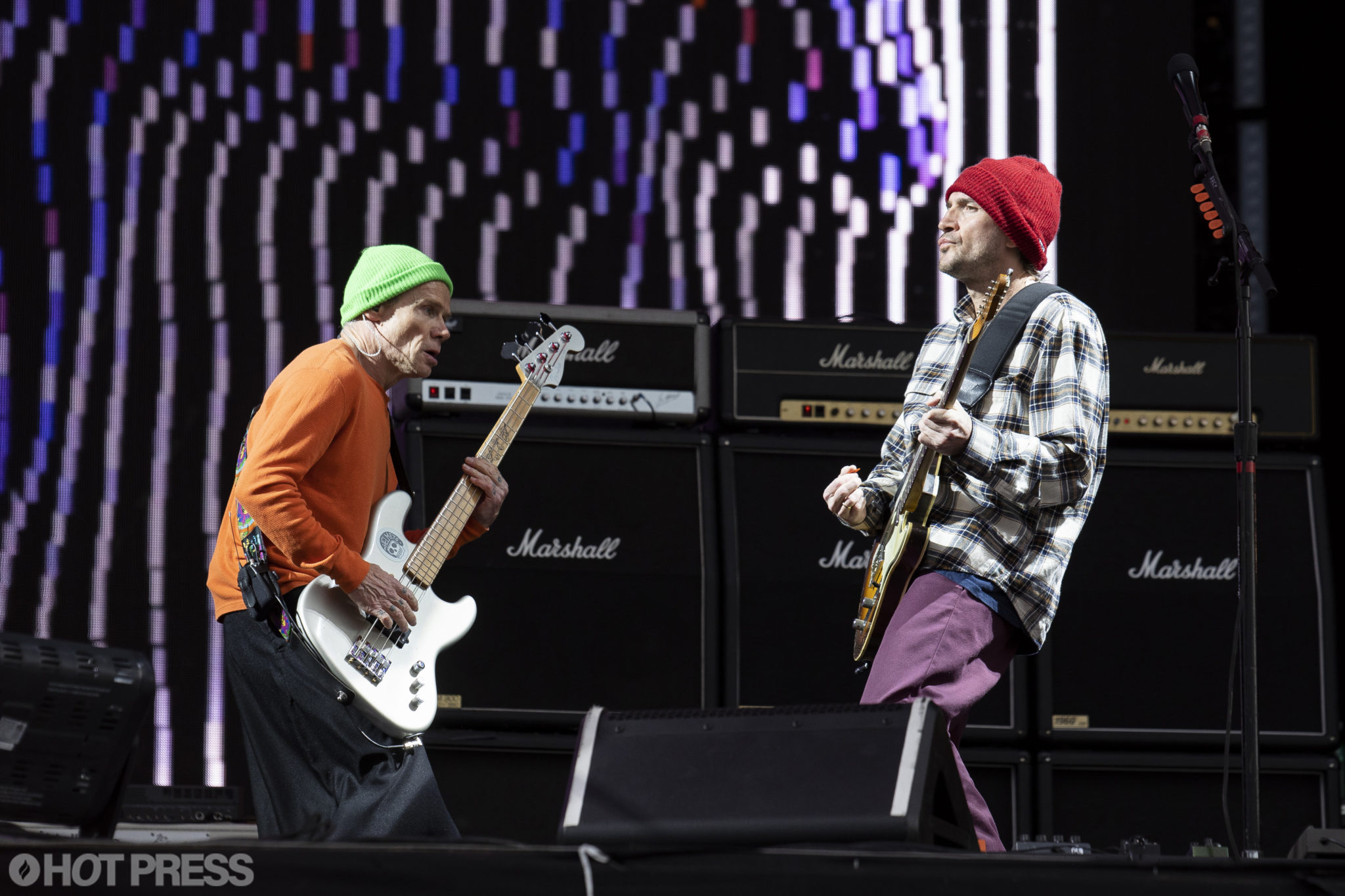 It’s become a tradition for the Chili Peppers’ to sneak Funkadelic’s ‘What Is Soul?’ into the occasional setlist, and this night was no exception. But they make sure to amp things up for a false finale with ‘Give It Away,’ setting off a chain of near-violent moshing among the dense crowd. Their instrumentation has an undeniable chemistry, making the rap-rock classic a fiery, intoxicatingly insistent ending. It is canon, classic RHCP. If it were the end.

They saunter offstage with the nonchalance of an undying band, as if each show brings them closer to a sort of eternal remembrance they’ve long ago achieved. But with the help of an unmoving crowd, Keidis and his crew were quick to return – Flea celebrating their comeback with a cartwheel across the platform. 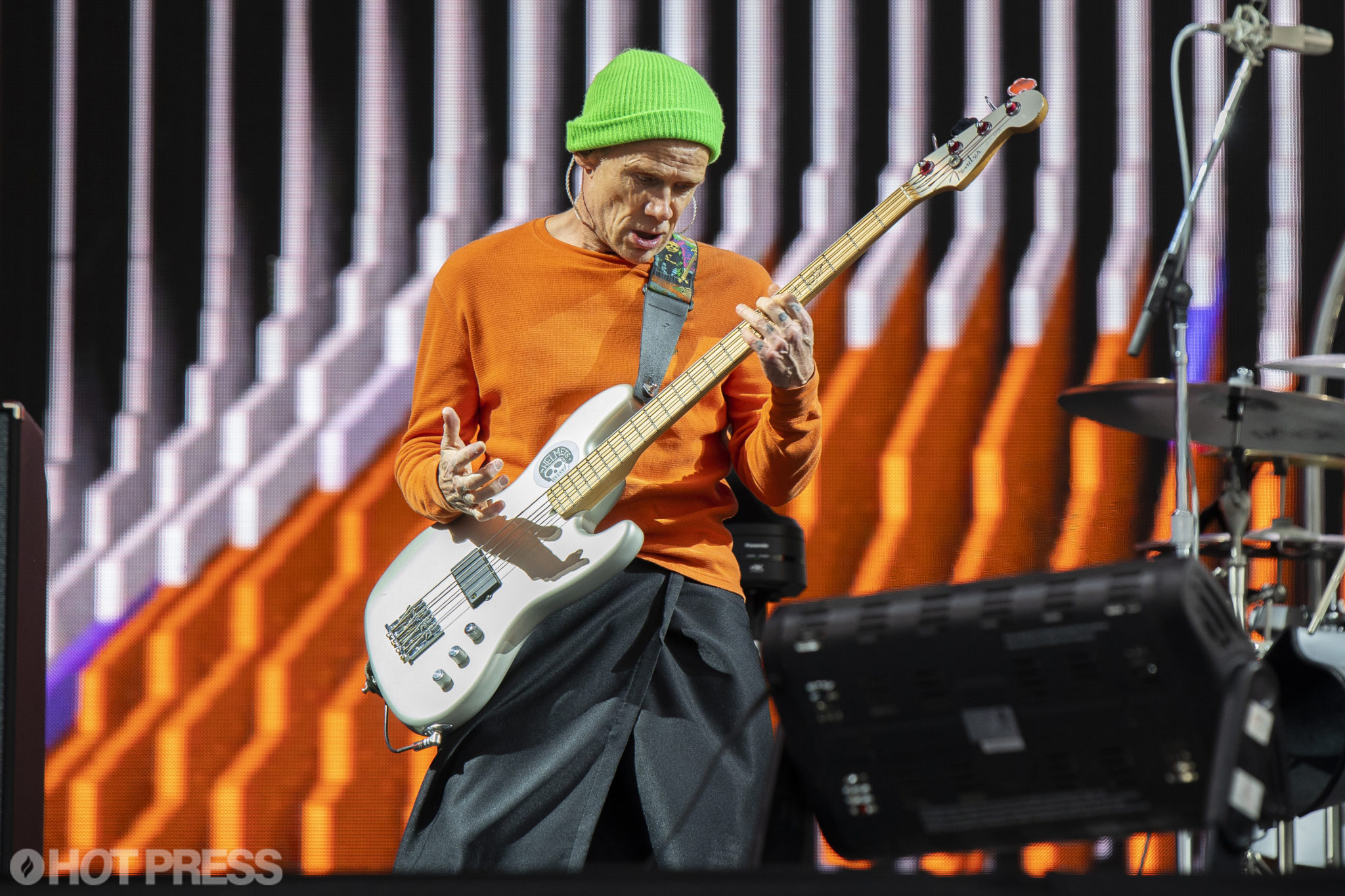 They have been persistent about disregarding ‘Under The Bridge’ this summer, but this tour’s debut of ‘Sir Psycho Sexy’ was a welcome replacement. The track carries a twisted funk, a low-end punch. It’s an embodiment of a younger, only slightly more youthful Keidis – though the frontman still manages to exert an overloading sexual energy in his late ‘50s. 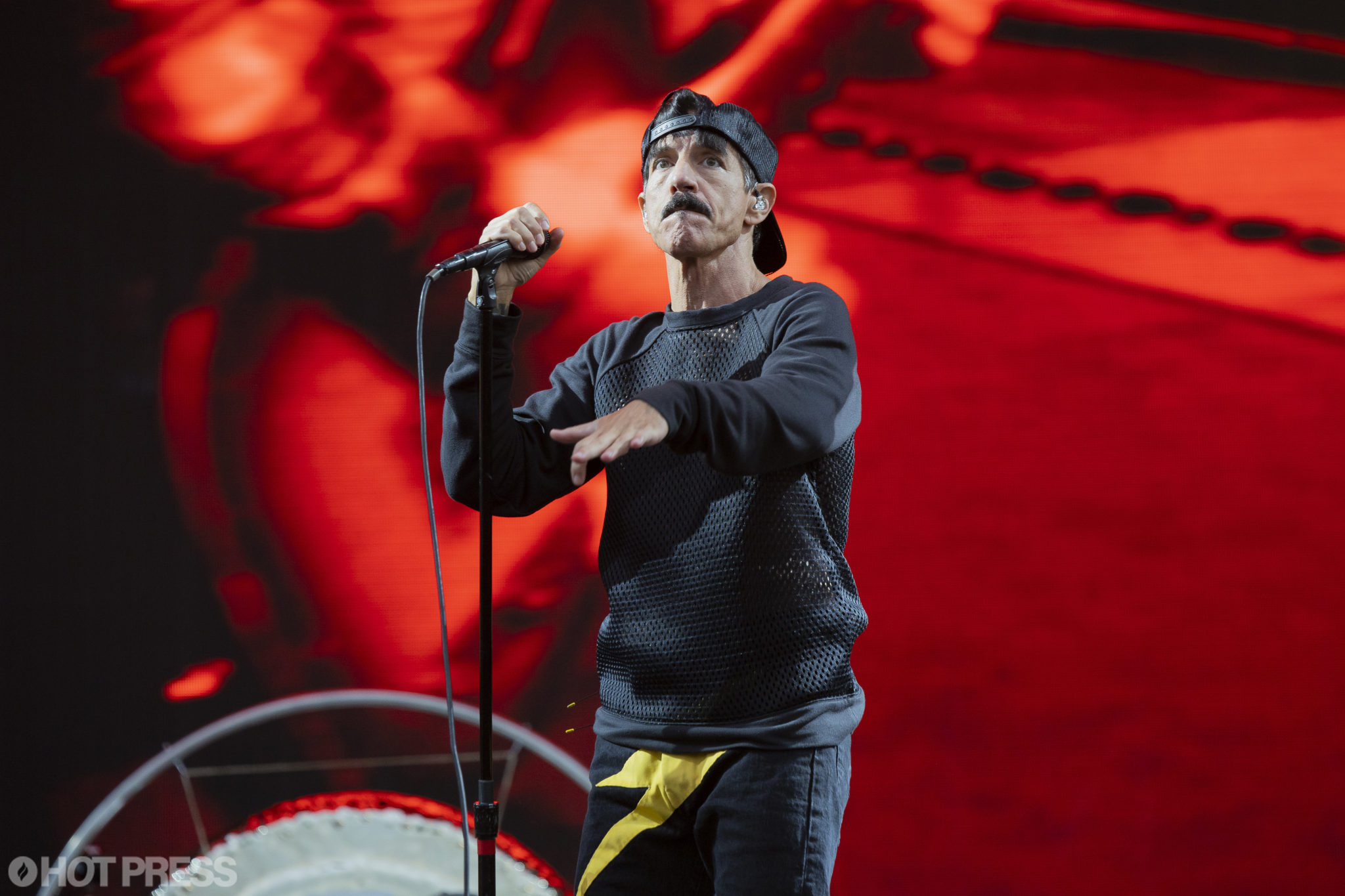 Following a fast-paced cover of Robert Johnson’s ‘They’re Red Hot,’ the band soars away for ‘By The Way.’ More than any song on the set list for the night, this one reeks of Frusciante’s necessity within RHCP. Keidis is candid on vocals, but the closing track leaves serves as a reminder – what sells the Red Hot Chili Peppers is the music, plain and simple. Always was, always will be.

Smith is the last to leave the stage, but our everlasting last image is of Flea, Keidis and Frusciante huddled in a circle over the fading vibrations of ‘By The Way.’ The vocalist leaves behind a final line of gratitude. “This is a magical country and a magical place.”

On their good days, this band is absolutely outstanding. On their bad days, Flea and Frusciante will still blow expectations out of the park. But on this day and in this park, the night could have gone on forever and not a soul would have noticed. With a foursome as infectious as Red Hot Chili Peppers, the antics are everlasting.