Night two stunned with a batch of captivating acts that traversed genres, and Hot Press was there to report on the best of the night.

Whelan’s are showcasing the best emerging Irish acts at their ‘Ones to Watch’ festival this weekend and Hot Press is here to scout out the best of the best every night. Thursday’s incredible performances proved just how great the year will be for Irish music.

The night started out on a fun note with the Belfast band Strange New Places, who rocked the upstairs stage with their energetic power punk. Their music, which deals with the “trauma of being anxious queers,” channelled the highlights of early 2010’s pop punk and emo as magical synth sounds mixed with jangly guitars. But the best part of the performance was the pure honesty and vulnerability. The lyrics were clear as day as the vocalist sang about anxiety, sex, gender dysphoria and the angst and confusion that accompanies all of it. She jumped off the stage to sing face-to-face with the crowd, shattering the barrier between performer and viewer and bringing smiles to everyone’s faces. Strange New Places’ angsty queer anthems are keeping emo alive for a new generation. 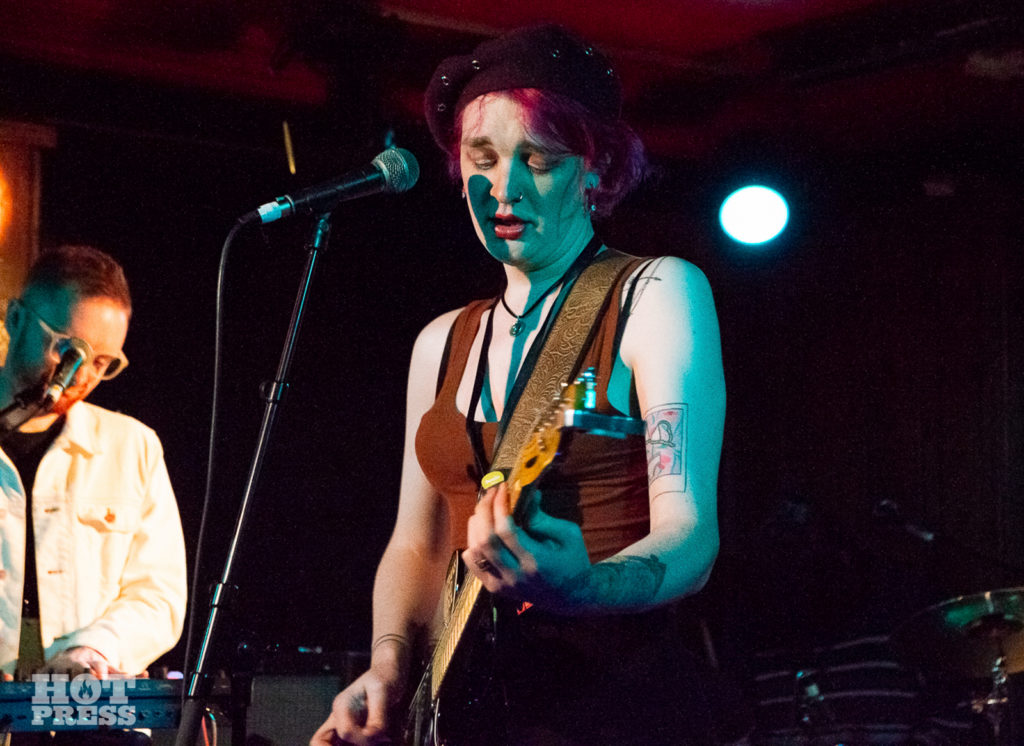 Strange New Places at Whelan's Ones To Watch Thursday 16/1/2020. Photos by Alison Kenny for Hotpress Magazine.

Down on the main stage, Chinese Newspaper turned the volume up a notch. Fuzzy guitars and pounding drums created a wall of sound accompanied by vocals that ranged from a half-sing-half-yell to a full passionate scream. Their post-punk blended psychedelic and surf rock, combining well-loved sounds into something more fresh. The crowd initially bobbed their heads in unison to sunny melodies, which quickly turned to head banging in the latter half of the set as the music got fuzzier and louder. ‘Sunday,’ off their latest EP Late Night Pharmacy had everyone, including myself, dancing. Chinese Newspaper is a shining example of the great post-punk music coming out of the Dublin scene and I can’t wait for another release. 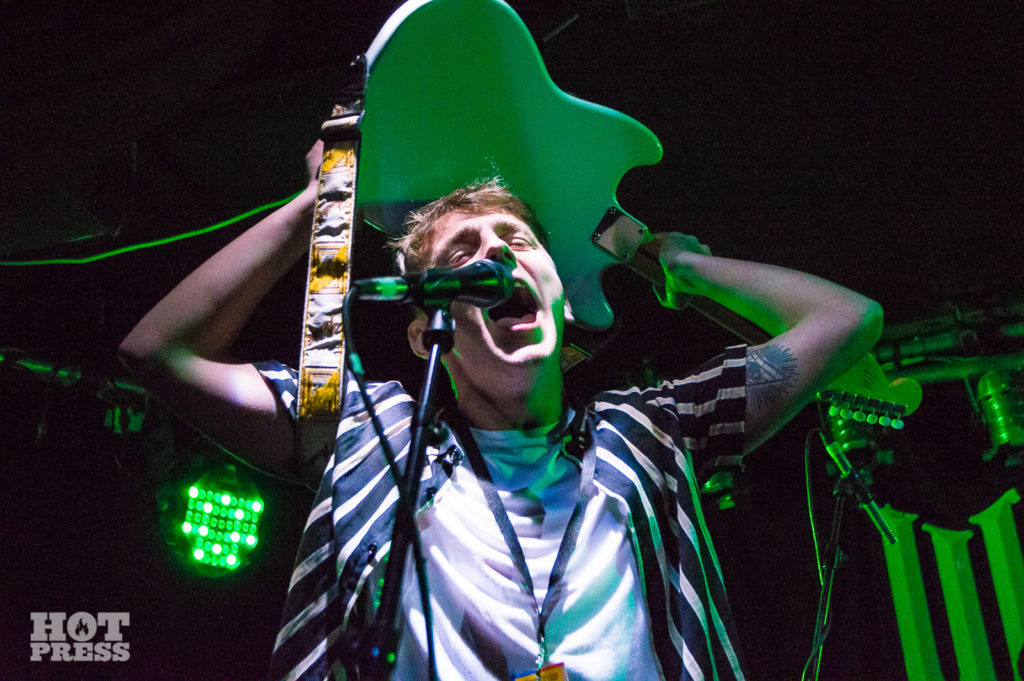 Chinese Newspaper at Whelan's Ones To Watch Thursday 16/1/2020. Photos by Alison Kenny for Hotpress Magazine.

If Chinese Newspaper turned the speaker dial up to 10, GREYFACE smashed it and bought a whole new sound system. When the four-piece walked on to the stage covered in black and white face paint, I knew I’d be in for a show, but there was no way to fully prepare for the insanity that ensued. The frontman’s whisper turned into a scream, the band launched into a breakdown and the floor turned into a mosh pit. Bodies were flung around the venue and a massive group of dedicated fans clung on to every lyric. Their sound was a bombastic Molotov cocktail of nu metal, screamo and post punk. By the time their set was over, the temperature in Whelan’s had quite literally increased and they definitely walked away with quite a few more fans. Between their striking image and commanding stage presence, GREYFACE is a force to be reckoned with. 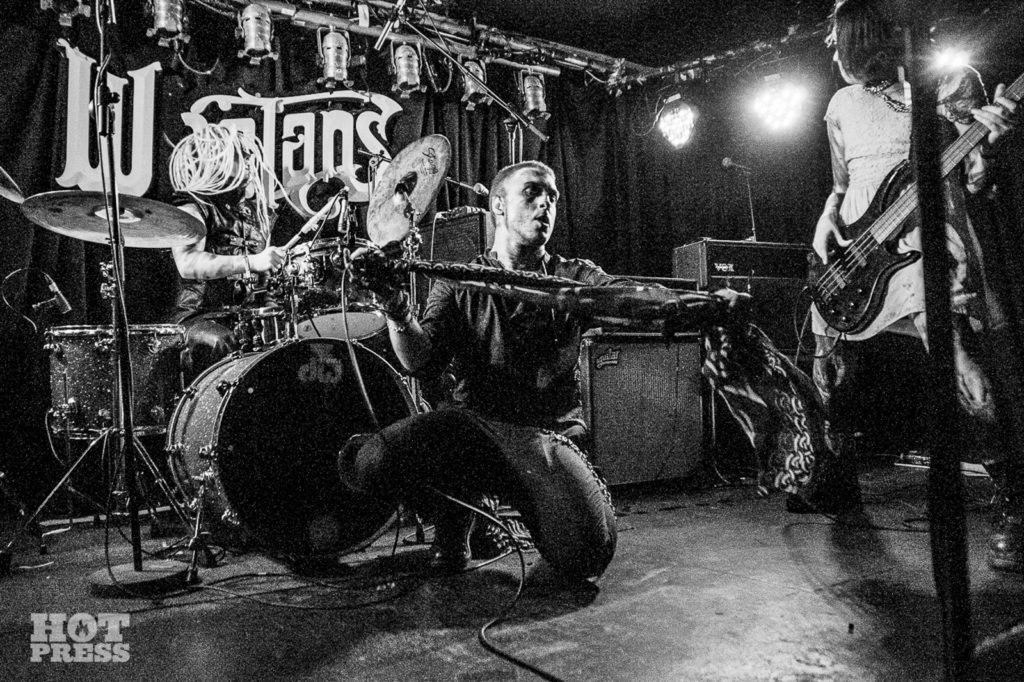 Greyface at Whelan's Ones To Watch Thursday 16/1/2020. Photos by Alison Kenny for Hotpress Magazine.

Naoise Roo brought some much-needed order when she took over the main stage. What was lacking in chaos, she made up for in pure talent. Her voice was an absolute powerhouse. It was dark and sultry, a bit bluesy, with a chilling vibrato. I could have listened to her just sing acapella for the whole set, but goth-tinged instrumentals played up the darkness of her voice to something even greater. She shone with the dark ballads, like her most recently released tune, ‘Falling Stars,’ about watching talented musicians around her quitting after getting discouraged. The pain in her voice was entrancing and heartbreaking. Her next EP, Sick Girlfriend, is out later this year and based on the samples she gave us at Whelan’s, it won't be one to miss. 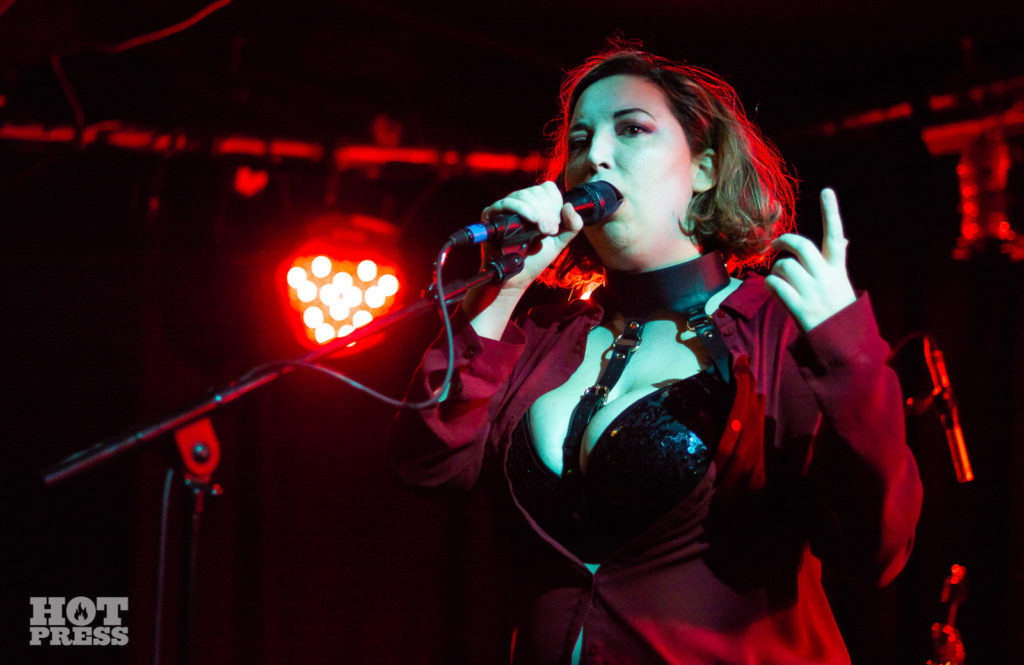 Naoise Roo at Whelan's Ones To Watch Thursday 16/1/2020. Photos by Alison Kenny for Hotpress Magazine.

Upstairs, the vibe had completely changed. Ma-Ka ditched the punk for some soulful R&B. Channelling the likes of Destiny’s Child and Ashanti, she swayed and body rolled her way through a mesmerising set. Her guitarist added an alternative edge that boosted the power of her personal lyrics. Ma-Ka was ready to bare her soul in a packed room full of mostly strangers (her brother was there to cheer her on). She earned the love of a captivated audience, who booed when she announced she only had time left for one song. Though she only has two singles out so far, she hinted at a new release coming soon. In the meantime, listen to 2019 single 'Where Were You.'

When I asked the person next to me what genre KASMS (pronounced “chasms”) played, he responded with “Dermot Kennedy.” As the six-piece band (equipped with not one, but three keyboards) started playing, the similarities were obvious, but the Dermot Kennedy comparison was too reductive. KASMS took the sounds of indie pop and transformed them into an explosive sound. The subdued front man came to life with one of the most powerful and emotional voices I’ve heard. The band perfected a formula – each song would start out relatively quiet, eventually building to an intricately layered climax. ‘Kind’ blew me away with its twinkling guitars that erupted into a chorus I could feel in my bones. Even without paying attention to the lyrics, the songs were striking and moving with their pure emotion and intensity. If KASMS is the future of indie, I can’t wait.

See the full gallery of photos here and check out Night 1 coverage here.

Keep checking Hot Press for our full coverage of the Ones to Watch festival throughout the weekend.

PREMIERE: Tadhg Williams shares highly anticipated debut single 'My Father's Clouds'
Lennon Stella at the Olympia (Photos)
Modernlove, Brooke Bentham, Yenkee and Emma McGrath added to Eastbound lineup
John Grant announces live show at St. Lukes, Cork
Gemma Bradley's top Irish tracks of the fortnight
Jane Willow is headlining The Cobblestone this Saturday
We use cookies to ensure you get the best experience on our web site - by using this web site you consent to our use of cookies. Read more »