Kneecap entered the Irish music sphere in much the same way as a housebreaker might enter a tree-lined residence in Malone. They didn’t tell you they were coming. They made a lot of noise. Not everyone approved. Then sooner or later you had to deal with the ruckus they’d caused.

2017 set them on the course they’re on now, with debut single ‘C.E.A.R.T.A’ acting as a lightning rod for thousands of Irish people to renew their interest in their native language.

Since then, they’ve found themselves kicked out of UCD, censored by RTE, profiled by the BBC over a ‘Get the Brits out’ chant at Belfast’s Empire Music Hall, and condemned by the DUP (which, let’s be honest, was a necessary rite of passage for them).

At Dublin’s Academy, Irish 1916 Proclamations are being handed out at the door for the gig, and are duly being brandished by the crowd as they wait for Kneecap to arrive. The band’s beatmaker – and their musical lynchpin – DJ Próvaí, is chanted onto the stage, coming out with his tricolour balaclava over his head. He sets things up for ‘Tá na Baggies ar an Talamh’, from the band’s debut mixtape 3cag. Mo Chara races onto the stage first, followed by Móglaí Bap. Their get-up: baseball caps, tracksuits, with 70cl bottles of Buckfast at hand. 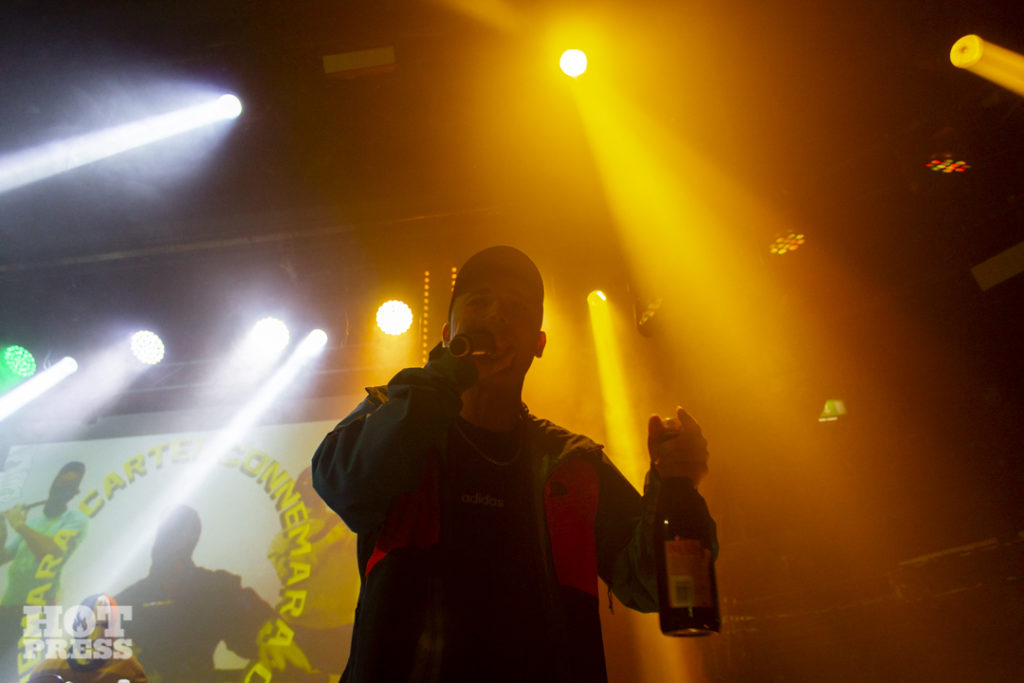 Kneecap at The Academy

Beyond the music itself, it’s easy to see why these two make for such a commanding rap duo. Móglaí Bap has a hard-edged, endless energetic delivery, whereas Mo Chara has an incredible rapid-fire flow (‘Your Sniffer Dogs Are Shite’ is the finest example of this). Their hilarious interchanges on ‘Gael-Gigolos’ – on top of the fact that they’re seamlessly blending Irish and English – are mind-blowing to witness.
Just before they launch into ‘Ceacht Mo Chara’ – their downbeat, trad-and-hip-hop-infused sex and drugs odyssey – Móglaí Bap draws attention to an incident at their Galway gig in Monroe’s, where a punter exposed himself and assaulted women in the crowd. He makes it clear that the band won’t stand for this and if it happens in the future, the guilty party will be duly reprimanded. There’s a heartening round of applause at this and nods of agreement. Fair play. Other performers should take note.

Those who aren’t fluent in Irish (I’ll count myself in that category) get a lesson during ‘Incognito’, a song that’s arguably done more legwork for disseminating the Irish language than the Leaving Cert and A-level curriculums combined. There’s also a certain local thrill in being from Belfast and hearing this song, with 800 people eating up lyrics about the Shankill buy-and-sell.

The second half of the set sees the group ratchet up the energy even further. Buckfast is skulled, Móglaí Bap’s Kneecap t-shirt finds its way into the audience, and the group unleash a pair of smoke machine guns on the crowd (they must’ve picked up a few tricks from their pals in King Kong Company). 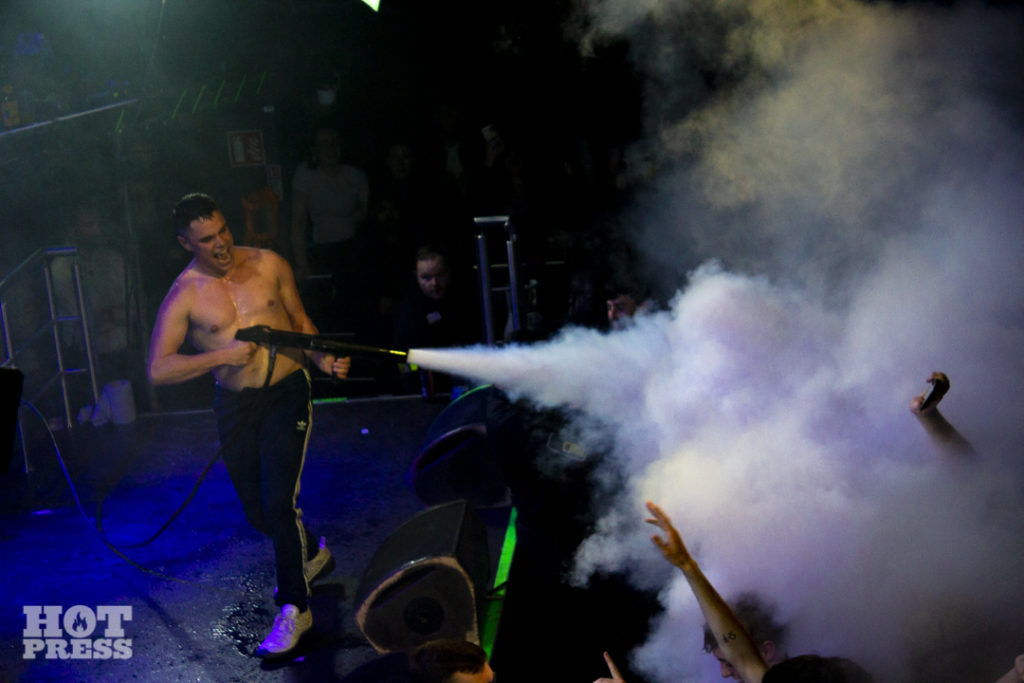 Kneecap at The Academy

Their new song, the marvellously titled ‘Get Your Brits Out’ goes down a stormer. But the best is saved for last. The double volley of ‘Amach Anocht’ (sped up in this instance by DJ Próvaí) and ‘H.O.O.D.’ sees the trio take it in turns to leap into the crowd. Sweat’s lashing. Tricolours are raised. Everyone’s clambering to get on top of someone else’s shoulders. The atmosphere’s electric.

The band finish the gig where it all started with their first ever release ‘C.E.A.R.T.A.’ It might not have the same intensity as the two songs preceding it, but this is mitigated by the fact that almost half the crowd know every word – “foc na riallacha atá ag RTÉ” gets belted out into the rafters.

As an indicator of how much this gig means to them, Kneecap return to the stage to play – according to themselves – their first ever encore. Not having any more songs in their back catalogue, they launch once again into ‘H.O.O.D’. And why not? It’s an out-and-out banger, their best weapon for a live set, and you’ll hardly find a better lyric this year than “‘Keep her lit the fuck or fucking fuck off,’ Jesus said on the cross.” Poetic. 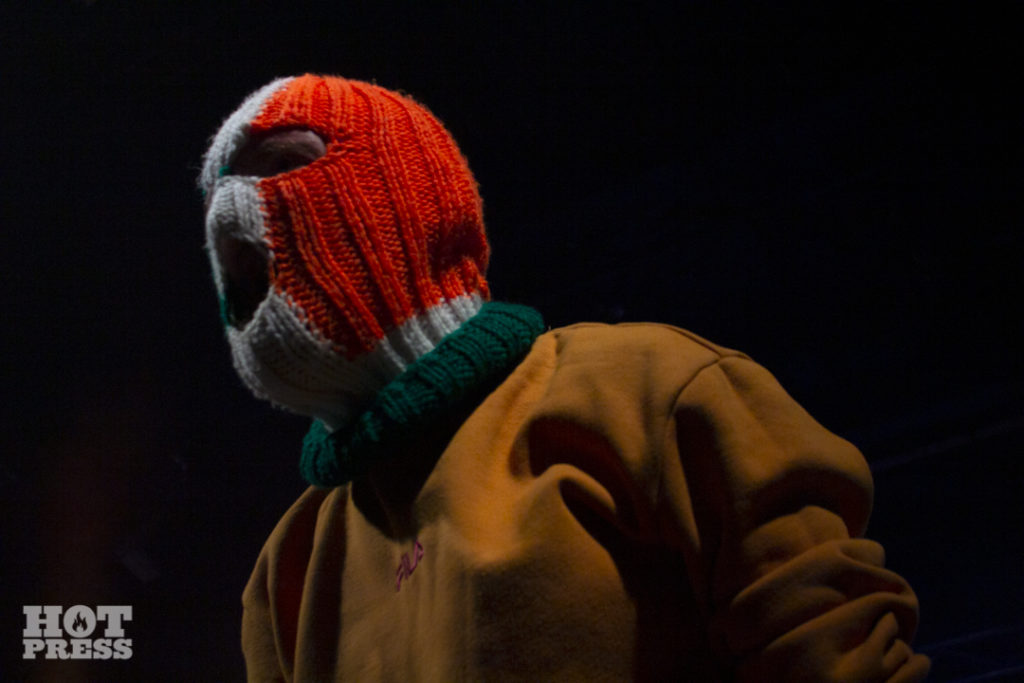 Jameson Connects Presents Kojaque
Kojaque explores grief and mental health in new video for 'No Hands'
Pale Waves: “I've come to terms with the realisation that I used to live a bit of a toxic lifestyle"
J Smith offers moving image of heartbreak in new video for 'I'm Sorry'
WATCH: Pale Waves unveil video for empowering track 'You Don’t Own Me’
WATCH: St. Vincent shares video teaser for new single 'Pay Your Way In Pain'
We use cookies to ensure you get the best experience on our web site - by using this web site you consent to our use of cookies. Read more »