In 2018, Ian Anderson and Jethro Tull celebrated their 50th Anniversary, beginning a series of tours across the world, now extending through 2019. Ian Anderson, known throughout the world of rock music as the voice and flute behind the legendary Jethro Tull, is celebrating his 51st year as a recording and performing musician. Anderson was born in 1947 in Dunfermline, Fife, Scotland. After attending primary school in Edinburgh, his family relocated to Blackpool in the north of England in 1959. Following a traditional Grammar school education, he moved on to Art college to study fine art before moving into his musical career.

The band formed in late 1967 through the union of the John Evan Band and McGregor's Engine, two blues-based local UK groups. Dubbed “Jethro Tull” by their agent in January 1968, they were awarded a residency at London's famous Marquee Club as a humble but unusual blues band—unusual for the central inclusion of the classical concert flute. Their ensuing releases would find the band blazing new musical trails, and their experimentation with sound and genre cemented them as legends of progressive rock.

Jethro Tull have released more than 30 studio and live albums, selling more than 60 million copies since their 1968 debut album This Was. After undertaking more than 3500 concerts in forty-something countries over four decades, Tull still performs up to 100 concerts each year to both new and longtime fans around the world.

Drawing mainly on the first two decades of Tull's influential output, the tour features a nostalgic sampling of musical highlights, performed by 36 members of the band who have played their parts over the years. The audience are taken on a musical journey from the band's foundational years through to the crazy days of arena and stadium concerts in the late 70s and 80s. 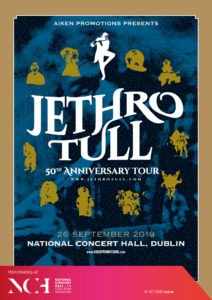 The Sultans of Ping are celebrating 30 years of Casual Sex in the Cineplex with a Cork Opera House show
WATCH: Rowan – Hot Press Rapid Fire Q&A Series
Rowan: “Watching Arctic Monkeys at Glastonbury in 2007 was a pivotal moment, I knew that's what I wanted to do"