From the Hot Press Archives: An Interview With Dusty Hill of ZZ Top
The Hot Press Newsdesk

It was the first time that ZZ Top played Dublin – and the Hot Press crew were there in force. The band’s legend had preceeded them: we know that they were an exceptional live outfit, who wrote great, crazy, blues-based music and that Rory Gallagher and Philip Lynott were among their peers – and admirers. The day after they had wowed the Dublin audience, Fiona H Stevenson (aka Fay Wolftree) went to their hotel to meet the band. As it turned out, she spoke mainly to Dusty Hill – whose death was announced yesterday by the remaining band members via Instagram. All these years later, it makes for fascinating and highly amusing reading.

Do ZZ Top sleep with their beards inside or outside the covers? And how do they manage to eat without getting food in their whiskers? These and other interesting questions are posed by Fiona H. Stevenson. 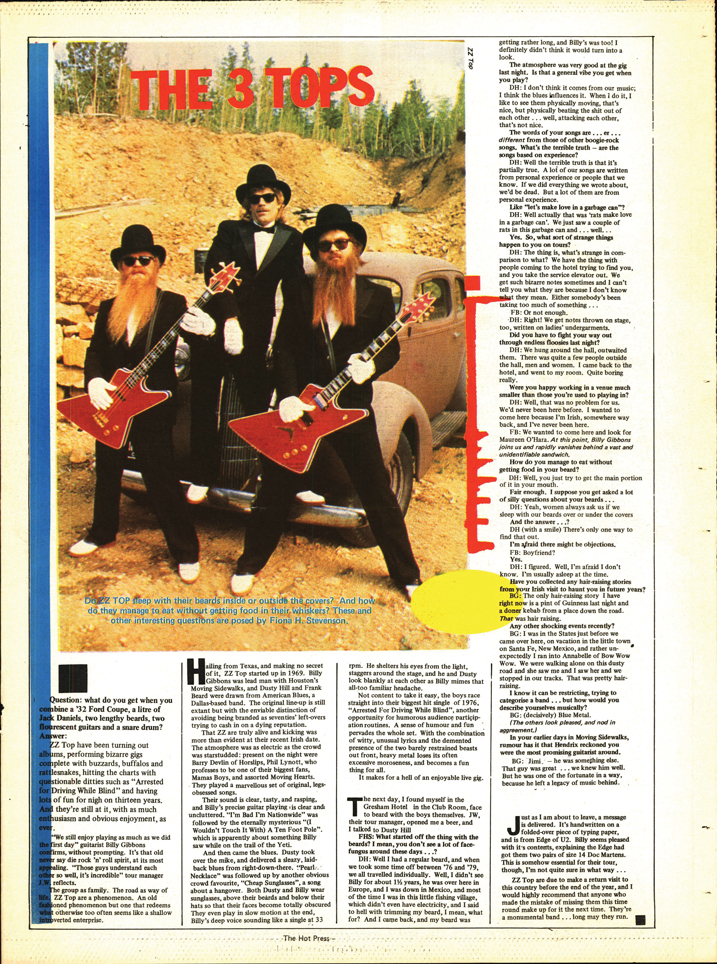 Question: what do you get when you combine a ’32 Ford Coupe, a litre of Jack Daniels, two lengthy beards, two fluorescent guitars and a snare drum?

ZZ Top have been turning out albums, performing bizarre gigs complete with buzzards, buffalos and rattlesnakes, hitting the charts with questionable ditties such as ‘Arrested for Driving While Blind’ and having lots of fun for nigh on thirteen years. And they are still at it, with as much enthusiasm and obvious enjoyment, as ever.

“We still enjoy playing as much as we did the first day,” guitarist Billy Gibbons confirms, without prompting. It’s that old never say die rock ’n’ roll spirit, at its most appealing.

“Those guys understand each other so well, it’s incredible,” tour manager J.W. reflects.

The group as family. The road as way of life. ZZ Top are a phenomenon. An old-fashioned phenomenon but one that redeems what otherwise too often seems like a shallow, introverted enterprise.

Hailing from Texas, and making no secret of it, ZZ Top started up in 1969. Billy Gibbons was lead man with Houston's Moving Sidewalks, and Dusty Hill and Frank Beard were drawn from American Blues, a Dallas-based band. The original line-up is still extant, but with the enviable distinction of avoiding being branded as seventies left-overs trying to cash in on a dying reputation.

That ZZ are truly alive and kicking was more than evident at their recent Irish date. The atmosphere was as electric as the crowd was star-studded: present on the night were Barry Devlin of Horslips, Phil Lynott, who professes to be one of their biggest fans, Mamas Boys and assorted Moving Hearts. They played a marvellous set of original, legs-obsessed songs.

Their sound is clear, tasty, and rasping, and Billy's precise guitar-playing is clear and uncluttered. ‘I'm Bad I'm Nationwide’ was followed by the eternally mysterious ‘(I Wouldn't Touch It With) A Ten Foot Pole’, which is apparently about something Billy saw while on the trail of the Yeti.

And then came the blues. Dusty took over the mike, and delivered a sleazy, laid­ back blues from right-down-there. ‘Pearl Necklace’ was followed up by another obvious crowd favourite, ‘Cheap Sunglasses’, a song about a hangover. Both Dusty and Billy wear sunglasses, above their beards and below their hats so that their faces become totally obscured. They even play in slow motion at the end, Billy's deep voice sounding like a single at 33 rpm. He shelters his eyes from the light, staggers around the stage, and he and Dusty look blankly at each other as Billy mimes that all too familiar headache.

Not content to take it easy, the boys race straight into their biggest hit single of 1976, ‘Arrested For Driving While Blind’, another opportunity for humorous audience participation routines. A sense of humour and fun pervades the whole set. With the combination of witty, unusual lyrics and the demented presence of the two barely restrained beasts out front, heavy metal loses its often excessive moroseness, and becomes a fun thing for all.

It makes for a hell of an enjoyable live gig.

The next day, I find myself in the Gresham Hotel in the Club Room, face to beard with the boys themselves. JW, their tour manager, opens me a beer, and I talk to Dusty Hill (DH) – with occasional interventions from Frank Beard (FB) and, eventually, Billy Gibbons (BG).

FHS: What started off the thing with the beards? I mean, you don't see a lot of face-fungus around these days?

DH: Well, I had a regular beard, and when we took some time off between '76 and '79, we all travelled individually. I didn't see Billy for about 1¼ years – he was over here in Europe, and I was down in Mexico. Most of the time I was in this little fishing village, which didn't even have electricity, and I said to hell with trimming my beard, I mean, what for? And I came back, and my beard was getting rather long, and Billy's was too! I definitely didn't think it would turn into a look.

The atmosphere was very good at the gig last night. Is that a general vibe you get when you play?

DH: I don't think it comes from our music; I think the blues influences it. When I do it, I like to see them physically moving, that's nice, but physically beating the shit out of each other… well, attacking each other, that's not nice.

The words of your songs are… er… different from those of other boogie-rock songs. What's the terrible truth – are the songs based on experience?

DH: Well, actually that was 'Rats make love in a garbage can'. We just saw a couple of rats in this garbage can and... well...

Yes. So, what sort of strange things happen to you on tours?

DH: The thing is, what's strange in comparison to what? We have the thing with people coming to the hotel trying to find you, and you take the service elevator out. We get such bizarre notes sometimes and I can't tell you what they are because I don't know what they mean. Either somebody's been taking too much of something...

FB: Or not enough.

DH: Right! We get notes thrown on stage, too, written on ladies' undergarments.

Did you have to fight your way out through endless floosies last night?

DH: We hung around the hall, outwaited them. There was quite a few people outside the hall, men and women. I came back to the hotel and went to my room. Quite boring really.

Were you happy working in a venue much smaller than those you're used to playing in?

DH: Well, that was no problem for us. We'd never been here before. I wanted to come here because I'm Irish, somewhere way back, and I've never been here.

FB: We wanted to come here and look for Maureen O'Hara.

At this point, Billy Gibbons joins us and rapidly vanishes behind a vast and unidentifiable sandwich.

How do you manage to eat without getting food in your beard?

DH: Well, you just try to get the main portion of it in your mouth.

Fair enough. I suppose you get asked a lot of silly questions about your beards.

DH: Yeah, women always ask us if we sleep with our beards over or under the covers.

DH (with a smile) There's only one way to find that out.

Have you collected any hair-raising stories from your Irish visit to haunt you in future years?

BG: The only hair-raising story I have right now is a pint of Guinness last night and a doner kebab from a place down the road. That was hair-raising.

Any other shocking events recently?

BG: I was in the States just before we came over here, on vacation in the little town on Santa Fe, New Mexico, and rather unexpectedly I ran into Annabelle of Bow Wow Wow. We were walking alone on this dusty road and she saw me and I saw her and we stopped in our tracks. That was pretty hair­-raising.

I know it can be restricting, trying to categorise a band… but how would you describe yourselves musically?

(The others look pleased, and nod in agreement.)

In your earlier days in Moving Sidewalks, rumour has it that Hendrix reckoned you were the most promising guitarist around.

BG: Jimi – he was something else. That guy was great … we knew him well. But he was one of the fortunate in a way, because he left a legacy of music behind.

Just as I am about to leave, a message is delivered. It's handwritten on a folded-over piece of typing-paper – and is from Edge of U2.

Billy seems pleased with its contents, explaining the Edge had got them two pairs of size 14 Doc Martens. This is somehow essential for their tour, though, I'm not quite sure in what way ...

ZZ Top are due to make a return visit to this country before the end of the year, and I would highly recommend that anyone who made the mistake of missing them this time ‘round make up for it the next time. They're a monumental band… long may they run.