On this day in 1983: Madonna released her self-titled debut album
Colm O'Hare

Strangely, there was talk of Madonna appearing at Slane long before she finally made her long-awaited Irish debut in 2004. Even back in the late ’80s, when the venue was strictly associated with major rock acts, unlikely rumours had circulated annually about Ms Ciccone headlining Lord Henry’s back garden. As such, it was probably inevitable that she would eventually make a headline appearance. Besides, her critically acclaimed Ray Of Light had widened her audience, expanding out from pop to encompass the indie and dance crowds. The Re-Invention World Tour, where she had once more decided to reinterpret her back catalogue, had been well-received in the US earlier that year. It had all the makings of another unforgettable Slane spectacular.

It was announced in April – quite late for such a major headliner. There was also some discussion about the fact that it was taking place on the last Sunday in August – the day before the kids go back to school – and the effect this might have on ticket sales.

In the end, though, it was a sell-out. The line-up on the day was curious, if not downright bizarre. While Paul Oakenfold spinning his 12” remixes made some sense, the inclusion of Iggy Pop and the reunited – if not reformed etc – Stooges made none at all. It’s no exaggeration to say that diehard Madonna fans were bewildered at the sight of the bare-torsoed Pop marauding around the stage, screaming expletives.

Oh, and it rained. And it rained again. Not just light summer showers, but monsoon-like downpours, the biggest coming just as the headliner was due to appear. Notably, a clip from the tour documentary features an almost tearful Madonna “pleading with God” to delay the rain for just two hours. Later, she said she couldn’t believe that 80,000 people stood for six hours in the rain. “It was pelting down,” she said. “It was so difficult to do my show, I felt like I was in a warzone.” 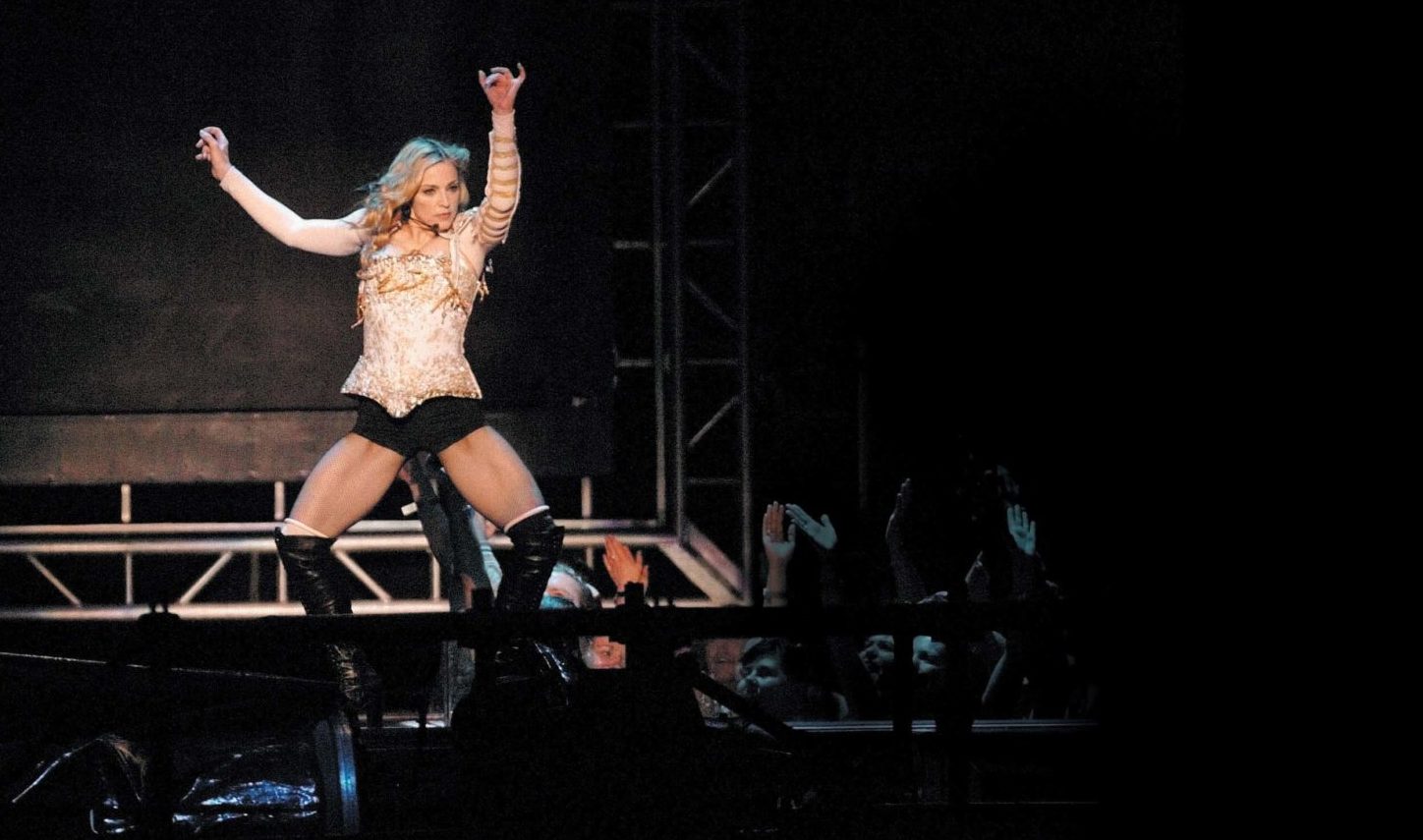 Her appearance was delayed by at least 40 minutes, with stage crew using brushes and towels to sweep cascades of water off the stage. Amidst a blaze of flashing lights, lasers and a giant video backdrop, Madge finally appeared well after 9pm, with her sparkly tight corset, a Marilyn Monroe hairstyle, and an army of dancers. Kicking off with the clubby textures of ‘Vogue’, she put on a pretty spectacular display, with themed segments and multiple costume changes. The big hits warmed up the saturated hordes, with energetic versions of ‘Into The Groove’, ‘Material Girl’ and ‘Papa Don’t Preach’.

There were bagpipes and kilts, and an unexpected cover of John Lennon’s ‘Imagine’ had everyone singing along. And while she didn’t include two personal favourites (‘Borderline’ and ‘Live To Tell’), Madonna almost made up for it with a wonderful, emotionally-charged ‘Crazy For You’, before finally concluding with her earliest hit, ‘Holiday’. A fireworks spectacular ensued, as she and her entourage made their escape via the road to Navan. It would be three years before another Slane concert – and normal service resumed with the second Slane appearance of The Rolling Stones in 2007!