They may be one of the hottest bands of the year, but Las Vegas synth fiends The Killers are planning to cool off this Christmas with some well-earned down-time and a skiing holiday in Utah. But not before they’ve discussed texting Charlize Theron, hanging with Elton John and that David Bowie tribute with Stuart Clark.

If I could've asked Santa for just one thing this year, it would have been a €895.45 British Airways ticket to The States on December 19. Why? Because that particular flight lands in Seattle two hours before The Killers, Franz Ferdinand, Snow Patrol, The Shins, Modest Mouse and Keane join forces for KNDD Radio’s Deck The Hall Ball in The Key Arena.

While I’d rather be savaged by a rabid rottweiler than have to endure Tim Oxley-Smith and his blandmates, the rest of the bill is so up yours truly’s alley that it ought to be re-christened Clarkstock.

“I didn’t realise all of those guys were playing, wow!” enthuses Killers singer and one-fingered synth wizz Brandon Flowers who, I’m sorry to inform you ladies, has recently become engaged to a 23-year-old Urban Outfitters manageress called Tana Munbkowsky. Acquiring a fiancé isn’t the only reason why Flowers would like 2004 to go on forever.

“It’s been one amazing thing after another,” he resumes. “Gold discs, being sat between Sarah Michelle Gellar and Geri Halliwell on The Jonathan Ross Show and looking up at Irving Plaza in New York and seeing David Bowie singing along to ‘Mr. Brightside’. I couldn’t believe it! Afterwards he complimented every single one of us individually, and said that he could hear the whole history of rock ‘n’ roll in our songs. He’s a hell of a musician and a hell of a nice guy. Elton John’s the same – he’s actually coming to our Manchester show tomorrow which is a follow on from us doing a TV special with him in Paris.”

Reg isn’t the only superstar who’s asked to be put on The Killers’ guest-list.

“Charlize Theron is hoping to make the London gig,” drummer Ronnie Vannucci beams. “We’ve become text buddies since meeting at an after-show party in Berlin which, I hasten to add, my wife and her husband both know about!”

“Going on tour in the States with Morrissey was another mindblower,” Flowers reflects. “Watching Smiths videos with my brother when I was 12 and hearing ‘Just What I Needed’ by The Cars on the radio are the two main reasons I got into music. As far as I’m concerned Ric Ocasek is god!”

Relations haven’t been quite so cordial with Franz Ferdinand and The Strokes.

“Franz sort of blanked us when we played together in Paris but that’s because they’d had a fight,” he says referring to the fisticuffs Alex Kapranos and Nick McCarthy came to last month. “The Strokes are pissed with us because we stole their live sound man while they were in the studio. It’s a dog eat dog rock ‘n’ roll world!” 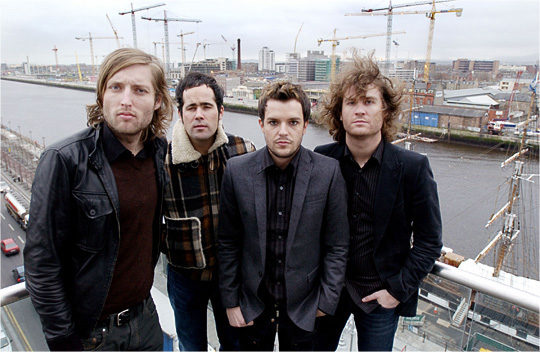 The Killers by Liam Sweeney.

If you’ve any money left over after buying me that return-ticket to Seattle, young Brandon is desperate for Santy to bring him a U2 iPOD.

“Man, that’d be so fucking cool! The first thing I’d stick on it is The U2 Digital Complete Works followed by John Lennon Imagine, David Bowie Hunky Dory, Morrissey Vauxhall & I and The Cure Head On The Door. Those are the records I’d go into a burning house to rescue.”

The only thing that’s blighted his 2004 is Europe’s Ryder Cup rogering of the United States. Ha-ha!

“That was embarrassing,” he rues. “I don’t have time for golf at the moment, but at my best I played to a five-handicap. I was 16 and thought that maybe I could make it as a pro. I’m glad I didn’t because I really don’t like those sweaters they wear!”

For the fashionistas among you, I should point out that Flowers is sporting the same dress-shirt, parachute trousers and badly applied eye-liner (miaow!) he has on five hours later when The Killers take to the stage at the Olympia.

“I couldn’t find a decent mirror to do my make-up in,” he complains. “I’m gonna have to ask the crew to put one in a flight-case for me. Never mind the backline, a boy’s got to look good!”

If second albums are difficult no one’s bothered telling Brandon who already has half of The Killers’ sophomore effort nailed.

“I’ve got a new cellphone which records for a couple of minutes, so any ideas I have go straight on to that. A couple are better than anything on Hot Fuss, so I’m really looking forward to March when we’re going to record some demos with Flood and Alan Moulder who did most of the Smashing Pumpkins records.”

And also engineered My Bloody Valentine’s Loveless masterpiece. The singer’s enthusiasm for going back into the studio is shared by Vannucci who notes that, “We’ve always been really good at jamming out ideas. ‘Smile Like You Mean It’ and ‘Midnight Show’ were both written on the spot in under 20 minutes. We do a little bit of screwing around at soundcheck, but it’s not the day in/day out messing we’re used to. The stuff that Brandon’s come up with on his own, though, is awesome.”

While Flowers was a hotel bellhop, Ronnie kept a pre-Hot Fuss roof over his head by taking photos in a Las Vegas wedding chapel.

“That was my job up till 18 years ago. I’ve done Elvis weddings – ‘Do you promise to love her tender and never return her to sender?’; Tom Jones weddings; and ones where the bride and groom were so hammered they would’ve been like Homer Simpson and Ned Flanders waking up the next day and going, ‘ Oh my god, I got married last night!’”

Okay chaps, what are The Killers doing for Christmas?? “Buying my wife a really expensive present to make-up for us spending two weeks together all year,” Vannucci laughs.

“Skiing in Utah where they had the 2002 Winter Olympics,” is the Flowers plan. “The record company are petrified I’ll break something but I’m pretty good on the slopes.”

Amy Winehouse: Revisiting her 2004 interview with Hot Press
On this day in 2004: Ray Charles died, aged 73
Electric Picnic at Home: Revisiting our original review of the inaugural EP in '04

Happy Birthday Madonna: Revisiting her sensational performance at Slane in 2004
WATCH: The Murder Capital release dreamlike video for 'Only Good Things'
Early bird rates available now for Marathon Coaches to Electric Picnic
A$AP Rocky pleads not guilty to firearm assault
On this day in 1980: U2 released 'A Day Without Me', the lead single from Boy
Mariah Carey's application to trademark "Queen of Christmas" criticised