"Those boots were how much?!?" Hot Press had decided to invest in some serious footwear - tax deductible - the week before Electric Picnic '18, knowing from experience how much ground needed to be covered in order to take in even some of the myriad delights on offer. It's always the reviewer's dilemma at these affairs - what do you leave out? Armed with nothing but a hastily scribbled list and a pen, I set off.

First stop, The Salty Dog. This ship in the forest - remember, we're in Stradbally, Laois, it's hard to get further from the sea on this island - will always be the symbol of the Picnic for me, where I've spent so many hours laughing my head off with a can in my hand. No time for such wistfulness now though, State Lights are kicking things off. The Dublin four-piece have been lauded a fair bit this year, and it's deserved. If the sound was any more eighties, it would be sporting shoulder pads and guest starring on Dynasty - think Simple Minds around the time they were starting to make the jump to stadiums, or early(ish) U2. Guitarist Joe Regan could easily be The Edge's stunt double - it's his chiming guitar that turns the A-ha classic, 'Take On Me', into a rousing, hands-in-the-air challenge, and he moves from guitar to keyboards in a familiar way. A song like 'In The Name Of The Father' might leave Bono's lawyers positively tumescent: there's the title for a start, which Mr Hewson has already used, as well as the 'Acrobat' guitar solo and the harmonica from 'Running To Stand Still', but the thing is, it all works. They've got the songs, they've got the chops, and, in  Shobsy O'Brien, they've got the proper front man. If anything the stage is too small for him, he's out on the lip one minute, up in the crow's nest the next. He brings Craig Fitzgerald from The Academic on for a run through The Strokes' 'You Only Live Once', quotes Bowie, Sings 'On Raglan Road', and proudly waves the rainbow flag. There's a starman waiting in this guy. Go and see them.

I caught ten minutes - festival reviewing is all about cutting and running - of Irish rock royalty in the form of The Unelectables - a new venture featuring Nick Kelly (The Fat Lady Sings), Paul Byrne (In Tua Nua), Dr Sean Millar (The Cute Hoors), Les Keye (Wilde Oscars), and the overly-talented Daragh O'Toole. The jangling Rickenbacker of the opener was enough to convince me, they've got my vote. I couldn't hang about though, I needed to be all the way over the other side of the sprawling site for Gomez on the main stage.

It's now an unbelievable twenty years since they took home the Mercury Prize with their debut album, 'Bring It On', but time has not withered its many charms - blues and soul with just a hint of Beeheartian weirdness thrown in. Ben Ottewell still has the pipes too, think of Howling' Wolf, if he had been born in Bonsall Derbyshire. 'Miles Away' rocks, and 'Tijuana Lady' is just the right amount of swaying for this warm afternoon. Pity I can't stay.

Back to the Hot Press Chatroom to talk to David Keenan, who is good enough to sing us a new song, 'Animals', and bring his mate Gareth Quinn Redmond up for 'Swimming River Road'. Everyone from George Best to Dante Alighieri got a mention in the interview. It was like a remake of Frost/Nixon only with more handsome leading men.

"This festival's been running fifteen years, what took y'all so long to invite me?" It's a valid question when it's coming from Mavis Staples, a 24 karat soul legend. 'If You're Ready (Come Go With Me)' - the crowd at the main stage are ready, and they do. A crack band, in the same way that the Grand Canyon is a crack in the ground, led by the master of the telecaster Rick Holmstrom, allow Mavis to storm through Talking Heads' 'Slippery People', 'Respect Yourself', and 'Freedom Highway'. There's a mighty version of  Jeff Tweedy's 'You Are Not Alone' from 2010 before the immortal intro to 'The Weight' rings out. Not that she needs him, or anyone else for that matter, but Hozier steps out on stage to offer his voice up at this altar of soul. Mavis finishes things off with 'I'll Take You There' which she most definitely did.

The magic boots then transported me to the Jerry Fish stage to catch the last two songs of David Keenan's set to a packed house (tent). 'Love In A Snug' and its 'rain, rain go away' refrain has become a clarion call for a sea of upraised hands, but it's closer 'Evidence Of Living' that really takes home the medals. A piano led almost stream of consciousness sound that reminds you of Patti Smith's quieter moments, it swells up as Keenan steps into the crowd, young women weeping around him. He clambers back on stage and beats his chest in thanks, but this is no swaggering braggadocio, it's euphoric passion. As much as Mavis before him, this is soul music. 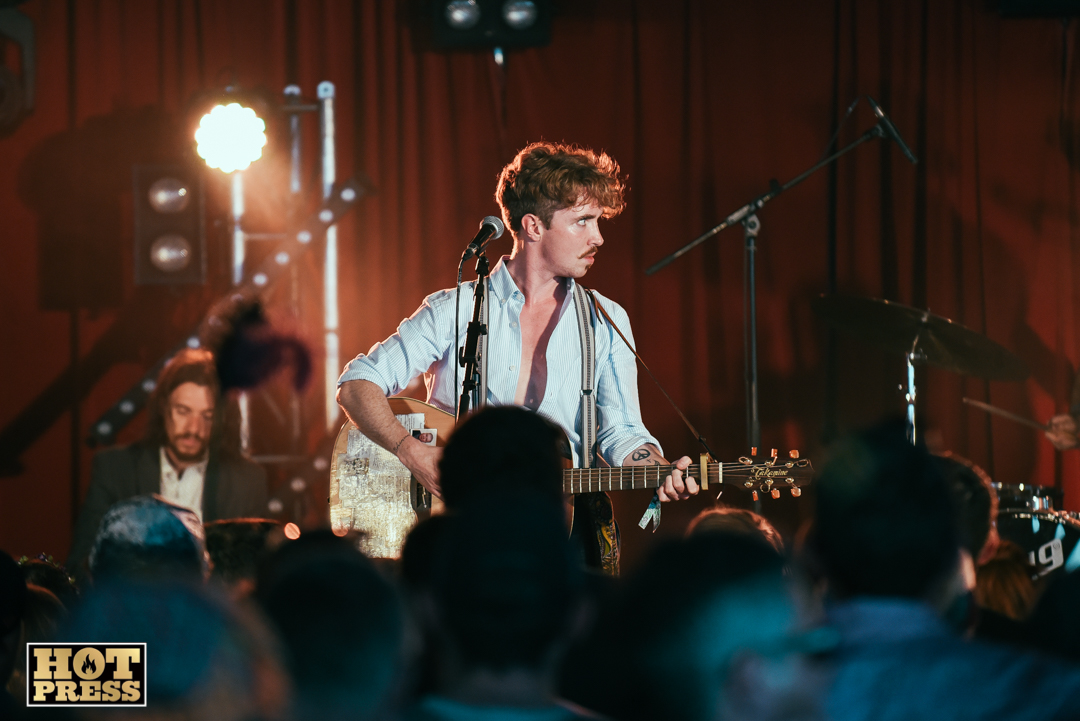 I passed by Wolf Alice in the Electric Arena, they were making a fantastic racket, calling up the spirits of Sonic Youth and Hole, Ellie Rowsell has an almost supernatural voice. I, however, needed a sit down, so I went to the My Lovely Ranch area in the Trailer Park section to catch blues from the Suir Delta (well, Clonmel) in the form of road warriors Crow Black Chicken. What a fool I was to hope for respite, for there is no sitting down when you are assaulted by the boogie being begot by Ireland's own ZZ Top, beards n' all. The bales of hay on the ground suit the sound of 'The Cool Mojo' and the frankly bitchin' 'Snake Farm'.

A quick nip back out the gate then, and back to the Salty Dog for These Charming Men. Lead by "Handsome" Dave McGuinness (Lir), this Smiths/Morrissey tribute act is so eerily spot-on that I feared to close my eyes lest I be hit across the head by a bunch of gladioli. 'Stop Me', 'The Boy With The Thorn In His Side, 'Girlfriend In A Coma', they even made solo Morrissey sound alright, especially on 'Suedehead'.

Fuzz, feedback, white light, and a raised middle finger from Mark Austin. That's how The Minutes get going on the Jerry Fish stage with a fucking monumental version of 'In My Time Of Dying'. They're angry tonight - Austin calls out lesser, "nicer" bands more than once - "think of my angry face while you're watching that shit!" and then gives out a lesson. By the time they get to 'Cherry Bomb' it's something akin to being run over by AC/DC's 'Rock N' Roll Train' after it had been hot-wired by The Stooges and The Glitter Band, and then the bastards back it up to finish the job. There's a quasi-psychedelic freak out, Austin throws his guitar at the amp and then kicks the defenceless instrument while it's down, and by the closing number, they've morphed into a pulsing, malevolent organism. Those other bands should run and hide.

I was looking forward to catching Ben Howard, but, thanks to getting battered by The Minutes, I was late and the Electric Arena was as stuffed as a gut after a Christmas dinner. I hung around to catch a song or two from this year's brilliant Noonday Dream album, before crying off for a bit of sustenance, soundtracked from a distance by N.E.R.D. shouting something about $100 bill and chill. Lost on me.

As appealing as the rock-by-numbers of Oasis, and the knees-up-Mother Brown-isms of Parklife era Blur were, the real britpop revolution was supplied by Massive Attack. 1991's Blue Lines, a mash-up of hip-hop, dub, and soul - is one of those albums that the word 'seminal' was invented for. Their set opens with an industrial update of that record's 'Five Man Army', main men Grantley "Daddy G" Marshall, and Robert "3D" "I'm definitely not Banksy" Del Naja stood centre stage, bathed in white light. That's about as much movement as we get, but it's not the kind of show. There's a school of whales opening to 'Risingson' before that savage vibrating sound kicks in - "see me run, now you're gone.. dream on". Azekel brings soul to 'Ritual Spirit', Young Fathers carry 'Voodoo In My Blood', there's a discordant crash in 'Angel', and the strangled sitar/guitar into that gives way to the almost Burundi drums makes for a brilliant run through 'Inertia Creeps', but the highlight must be the presence of Deborah Miller on vocals.  She carried 'Safe From Harm' - which comes compete with a wild slide guitar solo that sounds like Led Zep's 'Whole Lotta Love' and U2's 'Bullet The Blue Sky' having a scrap - and the inevitable closer, 'Unfinished Sympathy', it's familiar hi-hat intro raising the hairs on every arm. It was a mesmerising set from a truly unique band.

Exhausted, but happy, I head for my bed. I shall arise again, on the third day, and appear to many.