Confessin' The Blues
By: Pat Carty

A New Compilation, Selected By The Rolling Stones, Celebrates The Power Of The Blues. Pat Carty Gets His Mojo Workin'

Tutwiler, a small town in Tallahatchie County, Mississippi, 1903. Alabamian bandleader and music teacher William Christopher (W.C.) Handy is waiting for a train. A vagabond, holes-in-his-shoes guitar player is also on the platform. He places a blade against the strings of his battered guitar, and moans along “Goin’ where the Southern cross the dog”. Handy is struck by this other worldly sound; he would refer to it in his 1941 autobiography, Father Of The Blues, as “the weirdest music I ever heard”. Two years later and about thirty miles south, Handy’s band is playing a dance in Cleveland, MS. A local band are allowed to play a few numbers on guitar, mandolin and bass, strumming a steady rhythm over repeated memories of sugar cane and work camps. Handy began to incorporate these new rhythms into compositions like ‘The Memphis Blues’ and ‘Saint Louis Blues’ earning himself the nickname “Father Of The Blues” and kick starting the first blues craze.

Room 414, The Gunter Hotel, San Antonio, Texas, November 23rd, 1936. Robert Johnson sits facing the corner, starting off the first of only two recording sessions in his lifetime, he’ll be in the ground less than two years later, put there by a poisoned bottle of whiskey, probably. There’s another, better story. The devil finally came to collect his due. The hellhound that had been on Johnson’s trail since he went down to the crossroads near the Dockery Plantation, not far from Cleveland, MS. –a place that Charlie Patton and Howlin’ Wolf also called home for a while – finally caught up with him. In the dead of the rural night, a large black man walked out of the darkness, tuned his guitar, played a few songs and supernaturally conferred mastery of the instrument on the young Johnson. Don’t believe me? This is what Muddy Waters had to say when Johnson spooked him the one time he saw him play in Friar’s Point, MS. “people were crowdin’ round him, and I stopped and peaked over. I got back in the car and left, because he was a dangerous man. I crawled away and pulled out, because it was too heavy for me.” 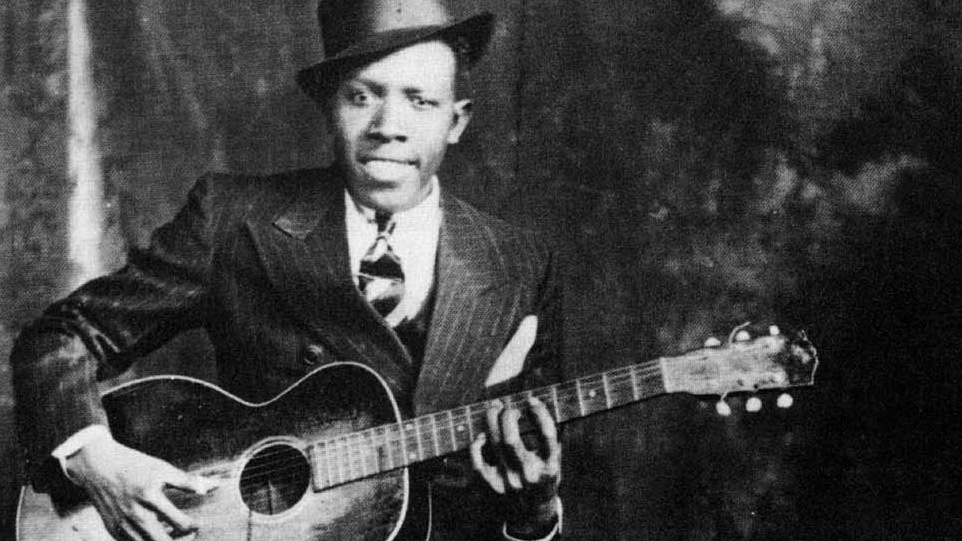 One of the two known photos of Robert Johnson. This portrait was taken by the Hooks Bros. Photography Company in Memphis, Tenn., circa 1935.

October 17th, 1961. Another train station, another crossroads. Platform Two, in Dartford, about 20 miles from central London. Mick Jagger and Keith Richards had played together as children but had drifted apart as they attended separate schools. Jagger was heading to classes in the London School of Economics, Richards was most likely going to Sidcup Art College, to doss off, play guitar and smoke cigarettes. The meeting would have meant little except for the records that Jagger had under his arm: The Best Of Muddy Waters and Chuck Berry’s Rockin’ At The Hops. Richards, a hopeless music nut already, is fascinated. He knows Berry, but he’s only heard of Muddy Waters at this stage. Jagger, as always the more organised, had written to Chess Records in Chicago to order the records. The two friends reconnect, Jagger invites Richards for tea, and this is the very moment The Rolling Stones are born.

Richards probably still claims to this day that all he ever wanted The Stones to be was a blues band, and indeed this “weird” music has been at the backbone of everything they’ve done. They’ve incorporated soul, country, gospel, reggae, even disco into their sound, but they’ve always been about the blues, stretching from their debut album in 1964, which featured covers from Muddy Waters, Slim Harpo, Jimmy Reed, Bo Diddley and Chuck Berry, up to 2016’s pretty fantastic Blue & Lonesome which found room for no less than four numbers by the mighty Coltrane of the gob iron, Little Walter.

Which brings us to Confessin’ The Blues, a new compilation selected by The Stones themselves. Spread across a double cd, or two double LPs, or even more desirable, a five 10” records box set, it’s an attempt to sum up the blues as a genre and explain why it had the effect it had on these young boys nearly sixty years ago.

It’s hard to fathom now, but one of the most far reaching effects of the Stones early career was how they, more than any other British band, managed to sell America back its own music. There probably wasn’t a huge amount of white teenagers listening to Howlin’ Wolf records in America in 1965 but there were plenty of them listening to The Rolling Stones, Now! where they could find The Stones’ version of ‘Little Red Rooster’, still the only pure blues song to ever hit number one in the U.K. charts. It’s one of four Wolf tracks included here, alongside the rollicking ‘Just Like I Treat You’, ‘Commit A Crime’ which The Stones covered on Blue & Lonesome, and the brilliant ‘Little Baby. No less an authority than Sam Phillips, the man who gave Elvis to the world, described Wolf’s voice like this; “He wasn’t just a Blues singer, he was a commander of your soul, whatever you heard come out of his mouth, it had that magic charm of ‘I believe this, I just believe it’” He went further to say of Wolf’s sound “This is where the soul of man never dies.”

May, 1965. The Stones are booked to appear on the popular US tv show Shindig! They insist that The Wolf is allowed to appear too. As strange as the Stones talking to the impossibly square looking host must have appeared to the viewing audience, God knows what they must have thought as this gigantic black man pointed his finger at the camera, demanding to know “How many more years, Do I have to let you dog me around?” You want an example of The Stones implementing social change, or the unstoppable power of the blues? Look no further. I wouldn’t be at all surprised to hear that the young Tom Waits was watching from somewhere.

A year earlier, The Stones had turned up at Chess Recording Studios, located at 2120 South Michigan Avenue in Chicago to try and capture some of this magic sound for themselves. Keith Richards likes to remember that Muddy Waters was painting the ceiling as they arrived but this is generally accepted as bollocks. Marshall Chess, the son of Leonard Chess, one of the co-founders of Chess Records, who would go on to work with the band on Their Rolling Stones Record label, claimed he laughed in Keith’s face any time he told that tale. Muddy is at the centre of this story though, it was his ‘Rollin’ Stone’, the first track here, that gave the band their name. He doesn’t really get the credit for it, but after he moved to Chicago from the country, he pretty much invented the form we now know as the rock n’ roll band, playing the clubs with electric guitar, bass, piano (where possible), drums and harmonica. His Chess sides are as powerful now as the day they were cut. ‘I want To Be Loved’, ‘I Just Wanna Make Love To You’, and ‘Mannish Boy’ are here in case you need reminding.

Little Walter might not be quite as well known as Muddy or Wolf but, if anything, his inclusions might be even better. ‘I Hate To See You Go’, ‘Just You Fool’ and ‘I Got To Go’ all rattle along at a ferocious clip, powered by his preternatural harmonica playing, and his ‘Blue And Lonesome’ is one of the heaviest things here. Naturally, Jimmy Reed, Bo Diddley and Chuck Berry all feature, Richards’ guitar playing owes a great debt to all three, but there’s lesser cited names too – Big Maceo, Mississippi Fred McDowell, Little Johnny Taylor, Billy Boy Arnold, Amos Milburn, Lightnin’ Slim, The Rev. Robert Wilkins, Slim Harpo, Magic Sam. The names on their own should be enough to get you at least a bit curious.

Forward and backward. John Lee Hooker’s ‘Boogie Chillen’ stretches all the way back, past Johnson in the hotel room, past Handy at the train station, back across the sea to the Africa where this music’s deoxyribonucleic acid lies buried. Put on any record from Mali, from Ali Farka Touré to Tinariwen, and the connection is obvious. Shoot back to 1991, Buddy Guy releases ‘Damn Right I Got The Blues’, the most recent recording included here, and gives a lesson to all the Claptons, Mayers and Bonamassas in this world. The blues doesn’t belong under some boring glass case. There’s fire in it, it is soul music. Sam Phillips again, “I think the Blues is the most powerful force. I think that the Blues has absolutely been the elixir that has made the world understand that music is so akin to the soul.”

Robert Johnson, the man Keith Richards thought was two guitar players when he heard him first, sits in a hotel room: “The stuff I got'll bust your brains out, baby. Ooh, it'll make you lose your mind.”

Confessin’ The Blues is out now.