Australian bushfire aid concert to be held at Whelan's this Friday
Mundy at A NIGHT FOR JOE, Monday 8th of July 2019. Copyright Miguel Ruiz.

The charity gig will include performances from Mundy, The Young Folk, Ailbhe Reddy, Uly, Lemon Cello, Niall Thomas and more.

I Heart Gigs has organised a special performance at Dublin's iconic Whelan's on Friday, January 24 in aid of the Australian Firefighters and Wildlife.

The gig will include performances from Mundy, The Young Folk, Ailbhie Reddy, Uly, Lemon Cello, Niall Thomas and more. Doors are at 8pm and tickets are €10.00.

Record-breaking temperatures and severe droughts fuelled a series of massive bushfires throughout Australia, burning over 18 million hectares of land. The effects have been devastating. An estimated one billion animals were killed in the fires and some endangered species may have been driven to extinction. At least 30 people have also been killed due to the bushfires. Recent rain has helped firefighters contain the spread, but the crisis still isn't over.

Musicians and other celebrities have come together to raise money for Australia through direct donations, benefit gigs and more. Elton John pledged $1 million "to support the bushfire relief fund" at a recent concert in Sydney, Metallica pledged $750,000 to fire fighting services and Nick Cave pledged $500,000 to relief efforts. Even the Wiggles came together with their original line-up for a bushfire relief concert last week.

The full line-up for "I Heart a Land Down Under" can be found below. 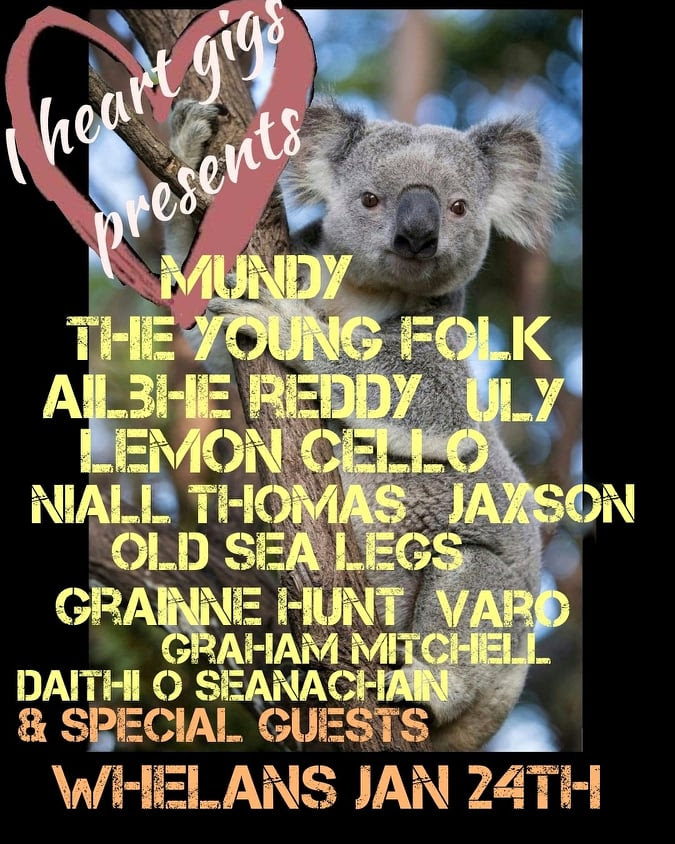