Four days of fantastic music from Northern Ireland will be celebrated during the eleventh annual Atlantic Sessions festival, from 14-17 November.

Last year saw the 10th Anniversary of Atlantic Sessions and its sell-out success was proof that the festival continues to grow from strength to strength. Audiences travelled from right across the province and further afield to hear musicians play throughout the four days of music, curated by Snow Water. Restaurants, hotels, pubs, coffee shops, music venues and the Town Hall were packed with the festival attracting new customers for them.

“Northern Ireland is extraordinary in the richness of its talent and our artists are receiving international awards and acclaim," said Snow Water Director Carolyn Mathers. "We look forward to hosting premieres of single, EP and albums, new collaborations that have been curated for the festival, all with the backdrop of incredible coastal scenery.”

This year’s festival will be headlined by Ryan McMullan in Kelly’s. McMullan has received praise from fellow northerner, Gary Lightbody of Snow Patrol, who has cited Ryan as one of Northern Ireland’s most exciting artists.

Although headline events are ticketed, Atlantic Sessions offers over 40 free gigs every hour throughout the weekend, making a music trail across Portstewart and Portrush. Audiences will have the chance to hear some of Northern Ireland’s rising talents, including over 10 of the 2019 NI Music Prize nominees, in unique, intimate venues.

New locations have been added this year, including the Causeway Lass Boat, Holy Trinity Parish, Star of the Sea Chapel, alongside favourites such as the Arcadia, Yacht Club, Harry’s Shack on the beach, the Anchor and Atlantic.

Festival Pass and individual tickets are sale online, or can be purchased from Visitor Information Centres in Ballycastle, Coleraine, Ballymoney & Limavady.

All others are admission free but early arrival is recommended.

A very special opening will celebrate Coleraine born Sam Henry and his remarkable collection of over 800 songs gathered from across the North Coast and beyond. Sam Henry - Songs of the People, a new documentary will be screened examining how Sam’s pioneering approach - in an official capacity and later when song collecting - placed him at the heart of rural communities and inspired his greatest work. It will be followed by a Q&A with the producer and live performances.

Also on Thursday, The Muscle Shoals Sessions Album Launch Party celebrates the acclaimed Alabama venue which was founded in 1969 and which was made famous by the likes of Aretha Franklin, Rolling Stones, Elton John, Boz Scaggs, Willie Nelson, Paul Simon and Bob Dylan. Amanda St John and her band will be joined by Tony Villiers. Amanda became the first independent Northern Irish/Irish artist in history to record in the legendary Muscle Shoals and her songs and performance style have been heavily influenced by these artists.

‘When The Mountains Meet The Sea’ will bring together an all-star band featuring Matt McGinn, Wilfie Gilbert, John McCullough, Nicky Scott, Matt Weir and Matt Curran, curated especially for Atlantic Sessions. Matt will be releasing his fourth album in 2020 and will be premiering many of these songs. An outstanding blend of soulful passion and melody that will haunt and inspire.

Gemma Bradley in Me and Mrs Jones meshes pop with the finest hand-picked sounds from R&B and soul. Her debut single ‘Berserk’ earned her the title of the winner of the Christie Hennessy Contest and her sound has earned her slots on BBC Introducing and RTE. Alice La will bring her colourful pop to the Anchor Complex, Dani will perform in Harry’s Shack on the Strand beach and the incredible 6-piece Runabay, who have been nominated for Best Album this year, will bring their alt-rock to the Springhill.

Friday will culminate in a showcase with Problem Patterns and New Pagans in the Atlantic Bar, and no punk night would be complete without the Godfather of Punk himself, Terri Hooley, bringing his DJ set. Nominated for Best Album and Best Live Act this year, New Pagans create music that is vivid and engaged. The songs have massive riffs and rare dynamics. Problem Patterns is Ciara King, Beverley Boal, Bethany Crooks and Alanah Smith. While often lyrically tongue-in-cheek, no subject is off limits.

Saturday opens at 1pm with NI Music Prize nominee Joel Harkin in Koko. Tour Alaska will launch their new album at 2pm in the stunning Arcadia – the solo project of A Plastic Rose frontman Gerry Norman, he has toured across Europe multiple times and has supported Biffy Clyro and Twenty One Pilots.

This is followed by one of the biggest voices in the North, as Ken Haddock brings a magical performance to Holy Trinity Parish at 4pm. At 5pm, the stunning Darkling Air will be joined by their long-time collaborators, Arco String Quartet to launch their new album in Portrush Town Hall. The band are back with their latest LP Ancestor and during The Atlantic Sessions 2019, attendees can expect a night of filmic folk-noir coupled with poetic lyrics, piano, guitar and strings producing a richly emotive and melancholic sound. In Portstewart, Reevah who has been played on RTE, BBC Introducing and 6 Music, will bring her distinctive Americana and new release to Me and Mrs Jones.

Ryan McMullan, fresh off his tour with Snow Patrol, will headline this year’s festival. McMullan has already earned a formidable reputation in the European live music scene. After spending many years developing a dedicated local following, in 2017 he supported Ed Sheeran. 2019 saw his first Glastonbury performance and his largest Belfast show in front of 5000 fans.

Saturday will culminate with a party in the Atlantic featuring The Sabrejets and festival favourite The Bonnevilles with their garage punk blues.

Holywood Record Fair will be partnering with Atlantic Sessions for the first time, bringing a wide range of new and pre-loved vinyl to Portstewart Town Hall from 10am.

Sunday will open with a lunchtime ‘In the Round’ featuring the extraordinary Gareth Dunlop, Eilidh Patterson and Brigid O'Neill, hosted by BBC’s Ralph McLean. Dunlop/s poetic vulnerability in his songs and distinctive, soulful voice has led to his music being featured in a wide array of television shows including Bones, House, Lucifer, Switched at Birth, One Tree Hill, and Nashville, to name a few. Over the years Dunlop has toured in the UK, Europe and US opening for a diverse group of artists including Van Morrison, The Stereophonics, James Morrison and more.

This will be followed with M. Cambridge's acclaimed Sea Song album which will be performed at 3pm on the Causeway Lass boat in Portrush Harbour. The album features sea songs based on old shanties, Ulster weaver-poet poems, traditional ballads and original compositions.

Best album nominee Conor Mason will play the Star of the Sea Chapel – the master of hook, harmony and heart, his air of richness and comforting warmth are perfect for a Sunday afternoon. Rory Nellis, one of the country’s most respected songwriting voices, will play his new album in the Anchor.

The festival will culminate with a closing party in the Anchor with trad band Tippin it Up – expect a roaring turf fire and some special guests! 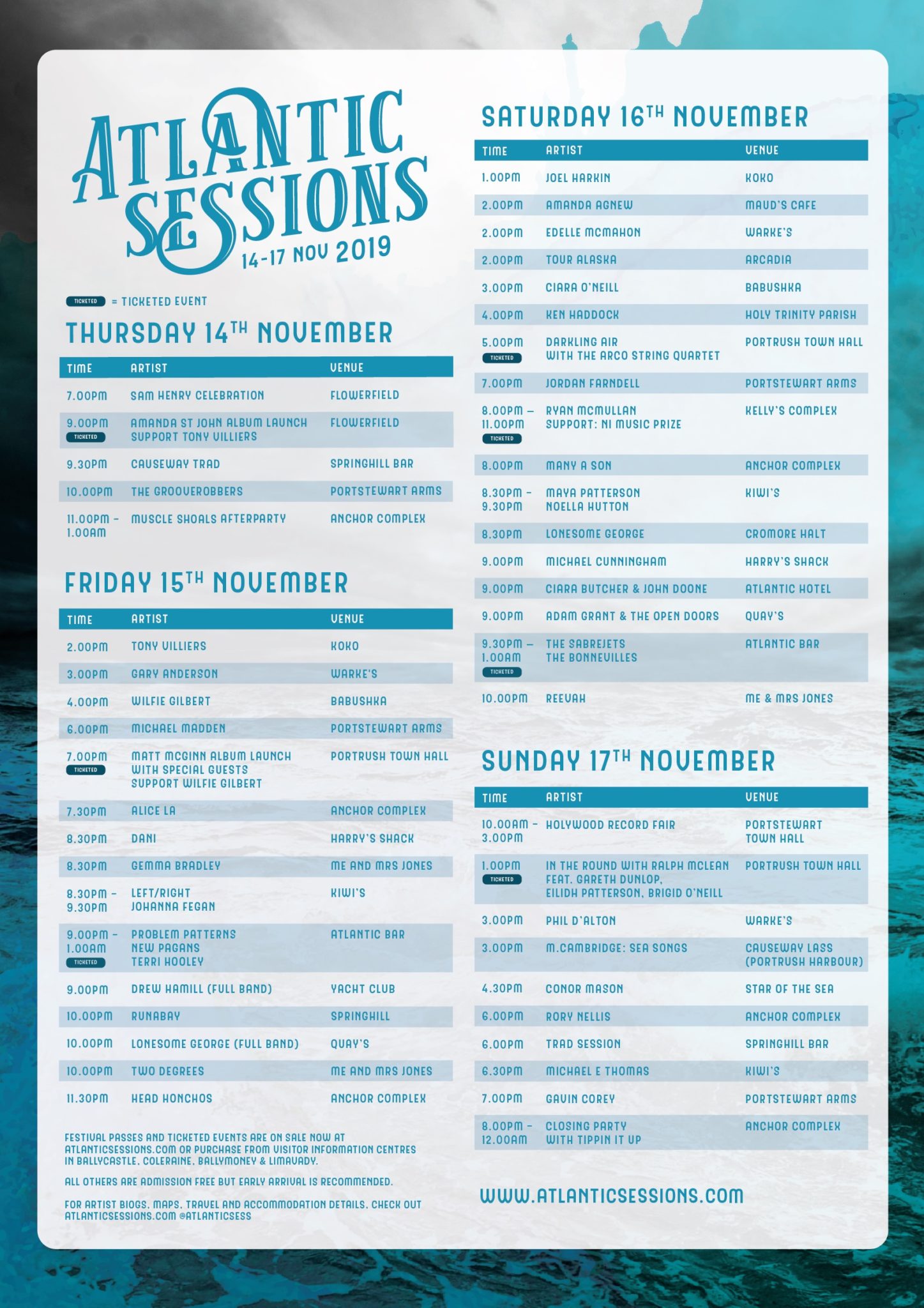 Third Bar's 'The Fight Is Not Over' EP will donate proceeds to feminist queer arts space in Belfast
Guests at Nothing Compares: A Celebration of Irish Women Artists (Photos)
Live Report: Nothing Compares – Brigid’s Day celebrated in Naas with star-studded night of music