How’s this for a record? Seventeen consecutive top 20 hits and six - count them, six! – number ones in the British singles charts, and I’m talking about the seventies so this was when you actually had a to flog a bit of vinyl to get to number one, not just have everyone doing that performing arts degree with you download it twice. I’m talking about the mighty Slade, one of the crucial links between the sixties and punk, and creators of some of the finest rock n’ roll singles known to man or woman, the very best of which have been collected in this gorgeous package (Madam!).

Noddy and the gang had been knocking around for a few years without much success in various permutations. They were known as Ambrose Slade before ex-Animal and Jimi Hendrix manager Chas Chandler came on board to try and set things right. He wisely advised them to drop their skinhead look – let’s be honest, we’re not talking about God’s most beautiful creatures here, they didn’t need any help looking scary - but it was still a couple of years before a cover of Little Richard’s ‘Get Down And Get With It’ finally broke the top 20 in 1971, and Slade were off to the races.

This was a strange and wonderful time in popular music. Men of all shapes and sizes put on a bit of slap, wrapped a feather boa around the neck, and, lo, glam rock was unleashed. Mind you, Jim and Dave and Noddy and Don were never, ever going to be mistaken for Marc Bolan. Alright, they weren’t quite the hod carriers in blusher that made up The Sweet, but they were no oil paintings either. To make up for this, they played it for laughs. Noddy in his mirrored top hat and the kacks he nicked from Rupert The Bear, and Dave Hill on guitar dressed like someone having a bad trip at a pantomime. Jim Lea was slightly more subdued and as for Don Powell behind the drums? Well, Don was a hardy looking bastard so he could wear what he wanted. No one was ever going to give him any shit. Frankly, any photo of Slade brings a smile because they look fantastic. Yes, your Bowies and your Ferrys and your Enos were perhaps better able to carry off the look, but Slade were probably a lot more fun down the pub.

After the success of ‘Get Down’ Chandler, wisely, put the foot down and insisted Holder and Lea write the follow-up. ‘Coz I Luv You’ is where this box kicks off, with the band’s first number one single. Lea later said they wrote this odd, violin driven stomp in about half an hour but it doesn’t show. It’s also the first track to boast the band’s lousy spelling trademark. Next up is the second number one ‘Take Me Bak ‘Ome’ which opens with a riff that Keith Richards himself would have been proud of, driven by Don’s snare abuse. Apparently, Holder did a bit of improvising during the recording, Lea heard something he liked, and held it over until the next one. 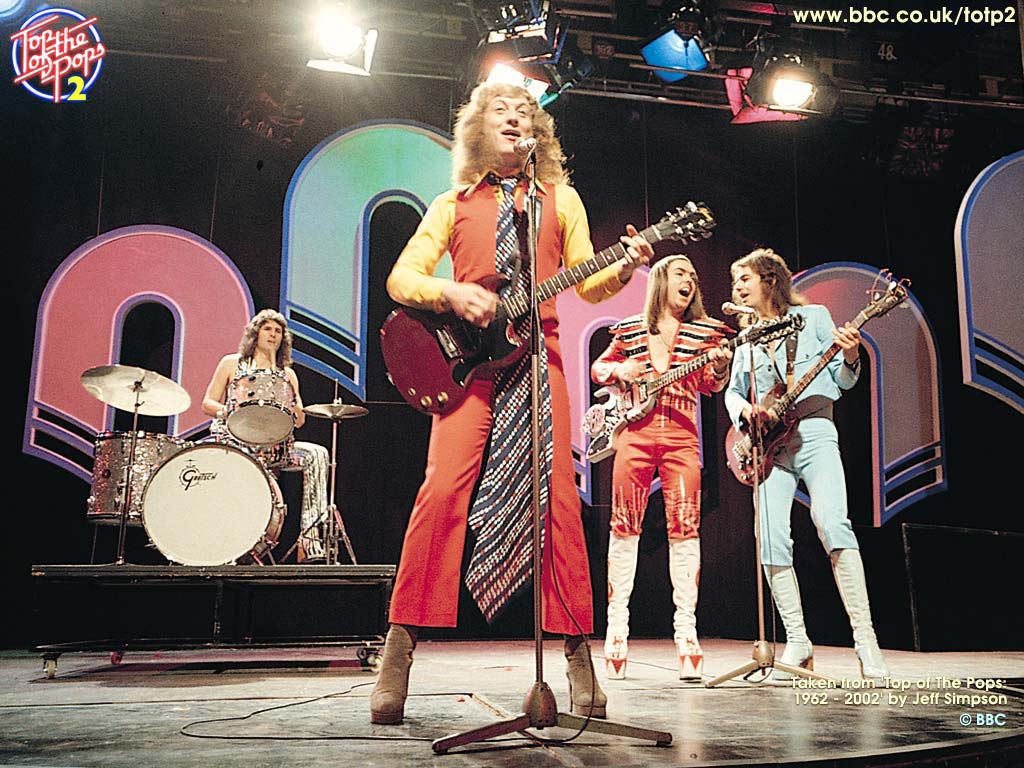 Released in August, 1972, ‘Mama Weer All Crazee Now’ is simply one of the finest bits of sleezy, tongue-in-cheek rockin’ out ever stuck on to a bit of plastic. Powell is working hard again at the back, and the verse lyrics about filling shoes with whiskey are just an excuse to get to the big chorus that seems purpose built to be roared out while drunk. It wasn’t broke, so they didn’t fix it for the follow up. ‘Gudbuy T’Jane’ stalled at number two but it’s hard to know why because the chorus is just as good and headbanging along when it comes on is downright de rigueur, although you wouldn’t get far with those “so young” lyrics in this day and age.

It had to be down-hill after that but there’s nothing wrong with ‘Skweeze Me, Pleeze Me’, another number one. ‘My Friend Stan’ is a bit of a left turn, a pub sing-along knees up mother brown kind of thing, but it sticks in the brain all the same. ‘Everyday’ is a plaintive, piano led beauty on the verses and then Noddy’s roar comes in from the chorus like some loon shouting in your ear at the bus stop. ‘Far, Far Away’ was one of their last great moments, a road song where Noddy describes all he’s seen over Jim Lea’s nagging bass riff. Noel Gallagher has tried to re-write this tune a few times, but he never got near it.

The box should have stopped there. Why, oh why (instead of ‘My Oh My’) is the awful ‘Night Starvation’ from 1981 included instead of, say, ‘The Bangin’ Man’, ‘How Does It Feel’, ‘Look Wot You Dun’ or even the obvious Christmas cracker? Who knows, but it’s a shame. Ignoring that, let’s doff a cap to those b-sides. This beautifully presented box  contains 10 seven-inch singles, with “international artwork” if that’s what you’re in to, and eight of the B-sides are well worth the flip over. Ignore ‘When I’m Dancin’ I Ain’t Fightin’ and the Django Reinhardt-ish ‘Kill ‘Em At The Hot Club Tonite’ and go instead for the Mott The Hoople-like ‘Wonderin’ Y’, the hard rockin’ ‘Man Who Speeks Evil’, ‘I Won’t Let It Happen Again’ or ‘I’m Mee, I’m Now, An’ That’s Orl’.

If there was ever a band designed with the seven-inch single in mind then surely it was Slade. You could argue that they never made a classic album - although Slayed? (72) and Slade In Flame (74) take a fair run at it - but their best singles will live forever, and echoes of them can be heard in everyone from The Clash to The Darkness. The immortal cuts in this box leap off the turntable, grab you by the lapels, and shove your head through the window. They’re still bringing the house down.

James Blake shares preview clip of new single 'Are You Even Real?'
Irish band Power of Dreams release new singles 'America' and 'Across the Shannon'
Album Review: Willie Nelson - First Rose Of Spring
Album Review: Paul Weller - On Sunset
Katie Melua Releases New Single and Announces ALBUM No. 8
Rough and Rowdy Ways by Bob Dylan: The Event Album Is Back!
We use cookies to ensure you get the best experience on our web site - by using this web site you consent to our use of cookies. Read more »