As he prepares to travel to Kenya with the Ray Of Sunshine foundation, Tipp hurler Niall O’Meara talks about All-Ireland glory, the importance of the parish, Bob Marley and his beloved brother Paul who died from suicide.

The next time you find yourself complaining about an ache or pain – and I’m a Master of the Self-Pitying Grandad Noise – spare a thought for Niall O’Meara who when scoring Tipperary’s first goal in their All-Ireland smiting of Kilkenny in August was in dire need of a hernia operation.

It was the latest in a recent list of injuries that also included a busted shoulder, punctured lung (ouch!) and a recurring hamstring problem.

Niall admits that but for the season ending on the high of his club side, Kilruane MacDonaghs, winning the North Tipperary Senior Hurling Championship, he might very well have thrown in the towel.

“I was beginning to think, ‘What am I getting out of this aside from injuries and constant trips to hospital and being prodded by consultants?’” Niall reflects. “You’re not a professional so it has to work symbiotically with your job – I’m a primary school teacher – and I was wracked with frustration thinking, ‘Is anything ever going to go my way again?’

“Winning that final against Kiladangan was so important because I’d grown up with the Kilruane MacDonaghs lads. You’d have slagged them, they’d have slagged you. The friendships run deep. I listened to Brendan Maher’s interview the other day when he said that winning the Munster Final with Borrisoleigh was better than winning the All Ireland with Tipp. I can totally see where he’s coming from in terms of being able to enjoy it more. You’re straight away back to your family and parish. I only started driving again today following my hernia operation so I didn’t make the game in Cork, but I’m delighted for Brendan who’s a great friend of mine and Borrisoleigh who’d have good representation with Tipp.”

In his stirring “This is what we live for” speech afterwards, Maher, who provided Niall with his All-Ireland Final goal assist, spoke of the victory lifting the parish following a spate of recent tragedies involving current and former players and their families..

“Yeah, that’s the power of hurling and football at club level,” Niall nods solemnly. “There’s an extended family giving you all this kindness and support. Winning’s not going to make it go away, but it does ease the pain for a few hours.”

“Liam’s a brilliant man manager. He understands that first and foremost I’m a teacher and that some of the others work in accountancy or insurance. He’d always ask, ‘How’s your job going?’ because he knows how your wellbeing off the pitch can have an impact on your hurling. Some managers are a bit, ‘Leave your problems on the touchline’ – and to a degree they’re right – but Liam genuinely wants to know what’s going on in your life, which makes it easier to train and play at the weekend.

“He’s very good at gauging the different strengths lads have, which is what helped us get over the line this year,” Niall continues. “On a personal level, I came off against Cork in the first game with a hamstring spasm. The following week I was on the mend and getting ready to go out against Clare when I tweaked it badly in training. Brendan Maher and myself jumped for a ball and landed in a tangle of legs. When I went to push off from it I could feel my hamstring straining. Liam Sheedy spoke to me straight away after training saying, ‘Don’t worry, it’s a long season’, which mentally put me in the right place to recover. There wasn’t a hint of negativity.”

By the time the All-Ireland Quarter-Final came around in July, Niall was back in the starting line-up feeling fresh and fit.

“It’s an amateur sport but, being a teacher who has the whole summer off, I’m able to train the same way as a professional athlete,” he explains. “If we train on a Sunday, I can do as much recovery as I want on a Monday unlike some of the other lads who are into their jobs at nine o’clock. I’ve time to cook the right food instead of grabbing a breakfast roll. I go back into training on Tuesday feeling totally re-energised. It’s a massive advantage.”

One of the first names onto the team-sheet for August 18’s Croke Park showdown against The Cats, Niall felt from the get-go that it was going to be Tipp’s year.

“To maintain a sense of normality, we stayed in our own homes the night before the final. Being a bit meticulous/obsessive, I checked my gear bag three times and did all the carb loading recommended by the dietician. There are certain foods you eat at certain times, which gives the day before a bit of structure and stops you getting nervous. There was some back and forth on the group WhatsApp reminding each other to go through the various routines. Travelling up on the bus I felt that, compared to the two previous All-Irelands I was involved in, we were less tense. When we arrived and walked round the pitch there were smiles rather than serious poker faces. The likes of Noel McGrath and Seamus Callanan had been in six or seven All-Irelands, so their experience alone helped the younger lads. We had every box ticked in terms of preparation – the backroom staff is top class – but you still have to do the job on the day.”

With Kilkenny three points up at the time, Niall’s 25th minute goal was a decisive moment in what wasn’t the prettiest of games.

“Oh, it was a real war of attrition,” he admits. “Our coach Eamon O’Shea, who’s a brilliant man, always says victory comes from seizing the big moments. We hadn’t been going great, but I was able to sidestep and shoot into the back of the net. I’d started the game off as centre forward and then after 15, 20 minutes came deeper – it was a plan we’d had to change things up a bit – hence me being in the position to make that big play. The goal gave everyone a 10% energy boost. After the break we were definitely the best team.” 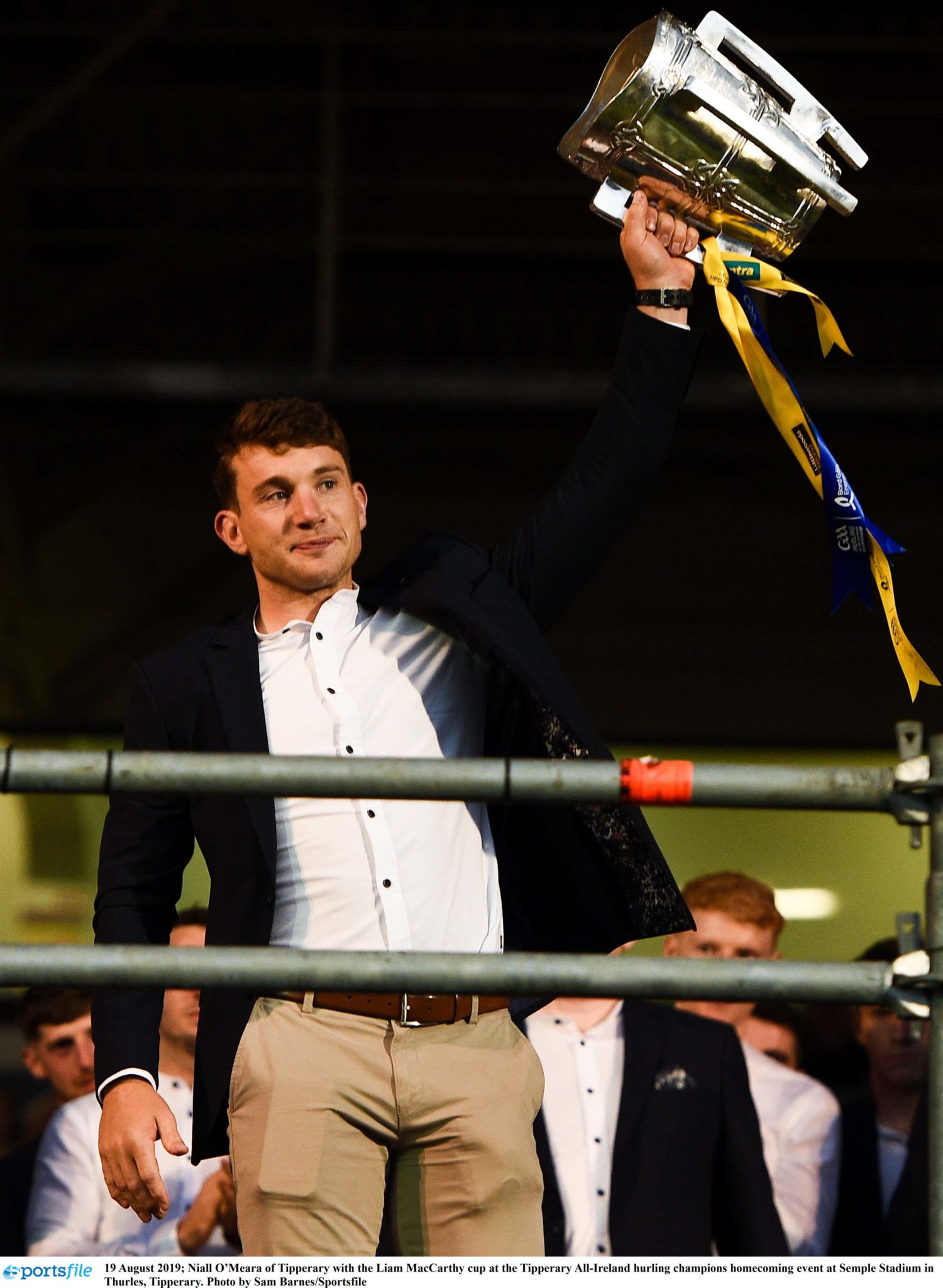 Who are Tipperary’s big talkers and leaders on the pitch?

“There’s a stat that over a ten-year span Padraic Maher missed only 23 minutes of Championship game time, and most of that as a result of blood subs, which automatically makes him somebody you look up to,” Niall says with barely concealed awe. “Then you have Noel McGrath coming back from his cancer battle in 2015. On and off the pitch he’s an inspiration. You have the guys who’d speak consistently and then there are the ones who’d give you that moment of inspiration, probably when you’re least expecting it.”

This being Hot Press I’m contractually obliged to ask what soundtracked Tipp’s successful All-Ireland campaign?
“We have a playlist on shuffle that each of the lads contributes a couple of songs to,” he smiles. “You’d hear everything from Oasis to EDM. Bob Marley’s ‘Redemption Song’ comes up a good bit; it’s really inspiring. Responsibility for the music ultimately falls to Brian Stakelum, our kit-man, who’ll pull out a lot of worldies. He told us about Sam Fender and Post Malone ages before they were in the charts. Corner-backs aren’t known for their style but Cathal Barrett is another good man for a song.”

Before picking a hurley up in anger again, Niall is heading to Mombasa with the Ray Of Sunshine foundation.

“A group, which includes myself, a local priest and three or four of the founders, is heading over on December 30th,” he concludes. “Last Christmas we did a sort of summer camp for the kids, this year we’re building an extension to a school in two weeks. I’ve just fallen in love with them and Kenya as a whole. It’s humbling to see what they go through whilst remaining so positive. We had a pub fundraiser the other day that brought in over €6,000, which was amazing, but a lot more is needed. You can donate to the project or sponsor a child at rayofsunshine.ie.”

You heard the man…

Quotes of the Year 2019: Highlights from our conversations with athletes
My 2019: Tara Stewart
In The New Hot Press: Stephanie Roche talks about that goal, equal pay in football, and much more
The Whole Hog: Exploiting The Cracks
The Whole Hog: Deja Vu for Irish Rugby
Sports Team of the Year: Irish Women's Hockey
We use cookies to ensure you get the best experience on our web site - by using this web site you consent to our use of cookies. Read more »