A large protest took place at DCU today after a lecturer at the college was criticised by a number of students for political statements on his personal blog.

DCU Students, staff - including other lecturers at the college - and members of other universities turned out on a chilly November afternoon to endorse the Black Lives Matter protest.

The protest was sparked when writings on Dr Mark Humphreys' blog, a faculty member at the School of Computing, came to larger public attention on social media this week.

Dr Humphreys has since defended himself on Twitter: "This week some students discovered my views on the Black Lives Matter movement of last year and got offended. I never showed these thoughts to any student. I do not discuss politics with students ever."

In his blog, he had stated that George Floyd, a Black man killed by Minneapolis policeman Derek Chauvin in May 2020, was "another useless criminal who dug his own grave."

"Floyd, a black career criminal (armed robber), was stopped by police after using forged money while high on drugs. He physically resisted arrest and was held to the ground where he died," he wrote. 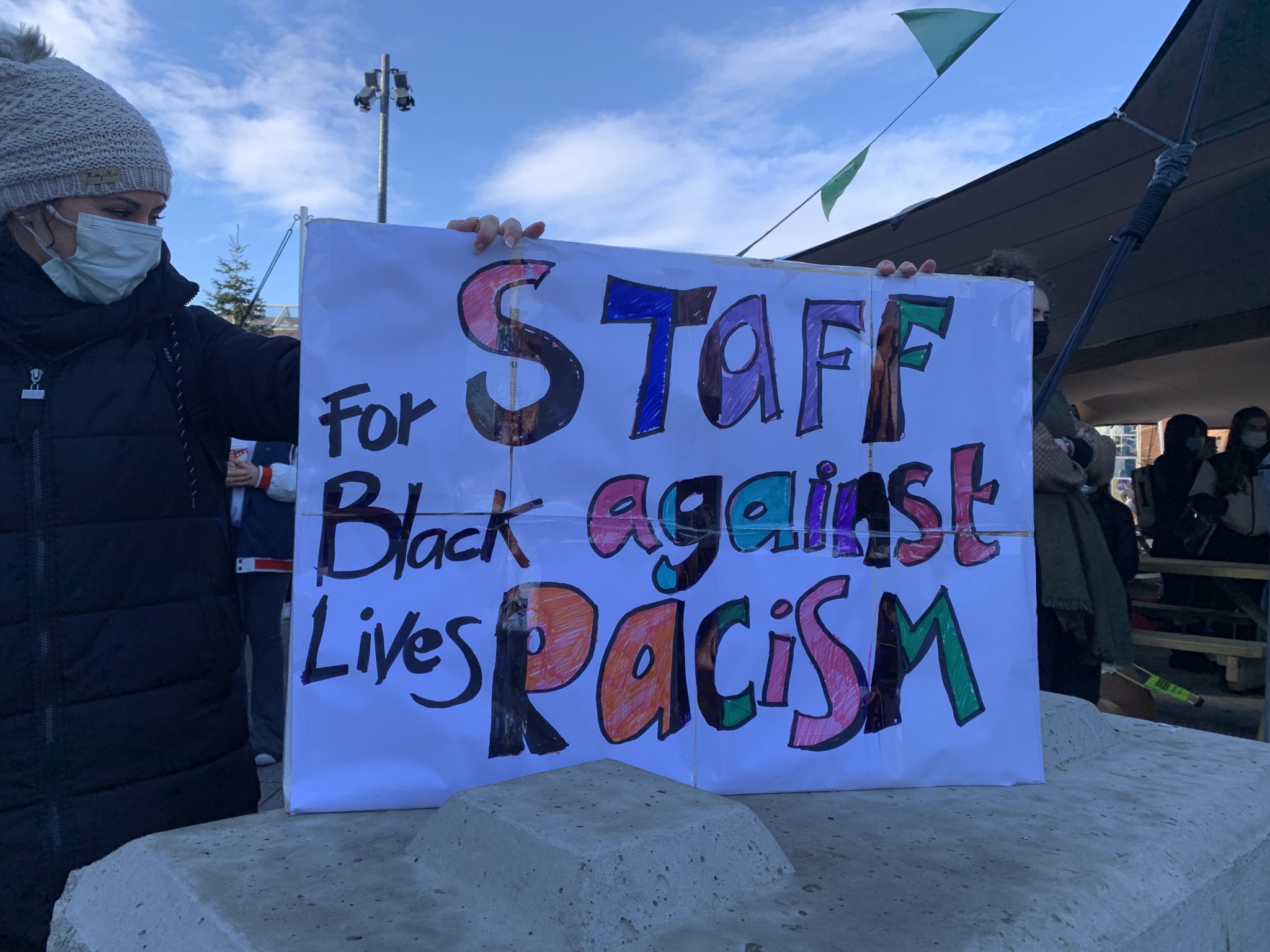 Speaker and one of the protest organisers, Christine O'Mahony, said at the event that "All these 'free speech warriors' didn't want our protest to go ahead."

"We have many white allies. But generally, if you are white, you cannot dictate what is racist. Free speech shall not be used as an excuse for racism and Islamophobia."

After speaking of his own personal experience of dealing with Dr Mark Humphreys, political activist Ibrahim Halawa, who also stated that he rejected an opportunity to study at DCU due to Humphreys' presence at the university, queried: "We usually tell those who are racist to educate themselves, but what do you do when it's an educator?"

Halawa had been arrested in Egypt in August 2013 after taking part in a pro-democracy rally following the ousting of president Mohamed Morsi in a military coup. After spending four years in jail, he was finally released in October 2017 after being acquitted of all charges.

Humphreys had written about the case on his blog in the past, saying that Halawa is "Muslim Brotherhood royalty."

One of the speakers at the protest later made the point that it was organised to say simply that "Black Lives Matter" and that they were "not asking for anyone to be fired."

"I'm really happy with the turnout considering that there were exams going on," organiser and DCU student Darragh Adelaide told Hot Press.

"There is a community at DCU here that does say Black Lives Matter. Black students here know that they're welcome and for every racist that there is there are 1000 people here that are going to stand up to that and say that those type of views aren't welcome."

The protest was organised today with the full support of the DCU Student's Union.

"Privately held racism is racism," the student body announced in a statement pledging their support.

"DCU SU will not perpetuate the lie that racism can be left at the door. We believe that racist views, whether expressed publicly or in a classroom, affect our students' learning experience. In fact, they have told us that they do."

DCU had released their own statement earlier this week regarding Dr Humphreys' blog:

"We understand acknowledge that people will find parts of this blog offensive. DCU is deeply committed to promoting equality, diversity and inclusion. The university does not endorse any of the viewpoints expressed in this blog and they do not reflect the views of the university, its staff or student body."

We are anti-racist. Today, tomorrow, and always.

See you all outside the U on Friday at 1pm. pic.twitter.com/z3o3b9GGhA