Parents at Lacken N.S., Blessington, have previously requested that RSE “should be free from the influence of a religious ethos". The Education Equality’s petition to move religious faith formation to the end of the school day has so far collected over 7,000 signatures. Photo: Unsplash/Ivan Aleksic.

A Wicklow school has garnered controversy following the exclusion of “same sex friendships” and contraception from its relationships and sexuality education (RSE) programme .

On April 5th, parents of children attending Lacken National School received a letter in relation to the school’s RSE Programme, encouraging parents to answer questions on queer relationships and contraception at home.

The letter stated that: “Teachers do not cover topics such as contraception and same sex friendships” and advises that: “Children who ask questions in class on content outside the designated curriculum are encouraged to discuss the issue with their parents.” Catholic schools are not obliged to exclude same-sex relationships in this way and some Catholic schools take part in the INTO’s “Different Families, Same Love” competition. 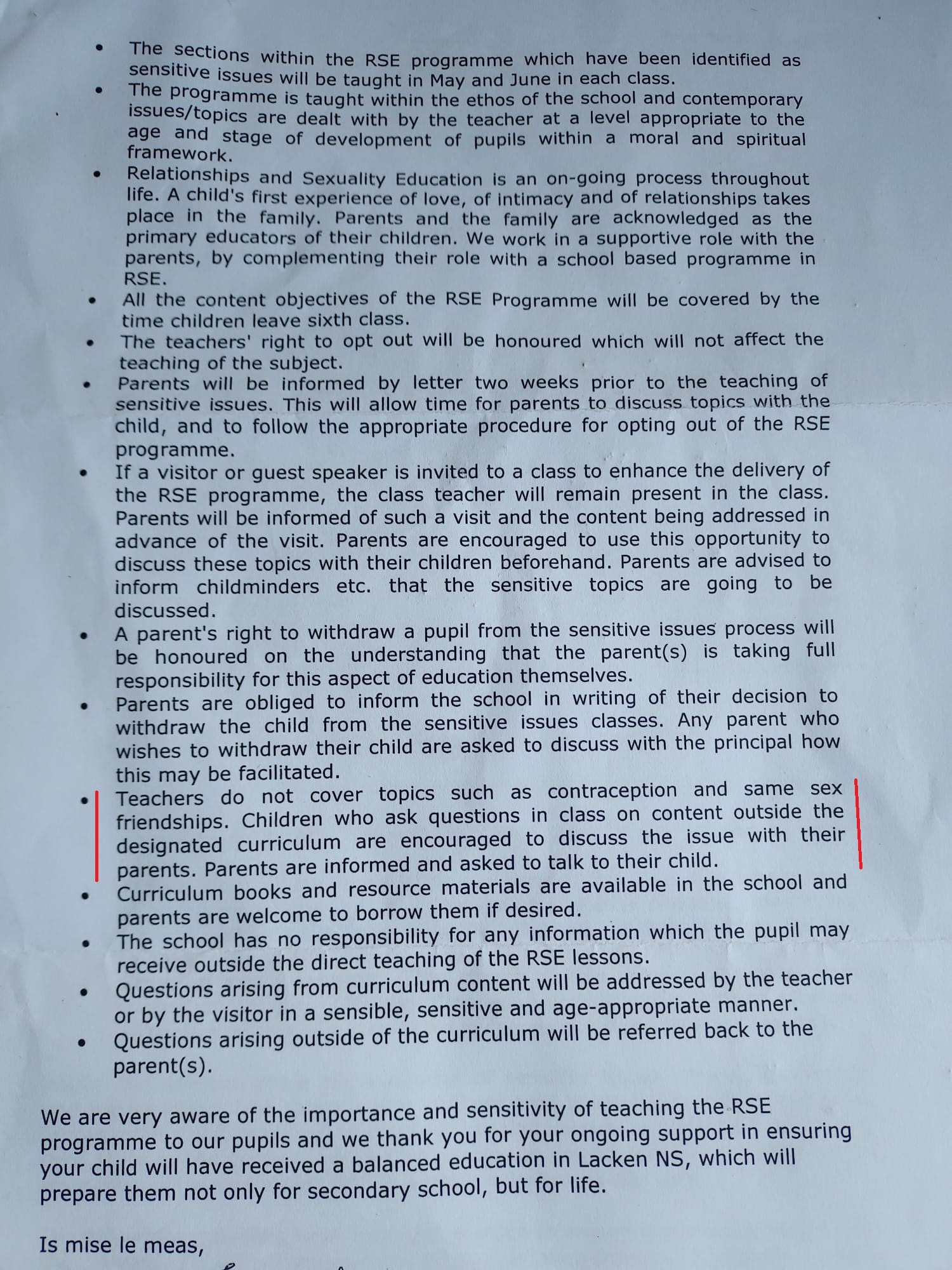 Last June, parents representing a majority of the children at this school wrote to the Principal and Board of Management to oppose the introduction of the Catholic ‘Flourish’ RSE programme. They said the teaching was “discriminatory to LGBTQ+ children and families and does not reflect the Constitutional position on marriage”.

The parents also wrote that: “What is taught to all children in Ireland, particularly with regard to sexual education, should be fact-based: everything that the children hear should be free from the influence of a religious ethos.”

“Parents representing a majority of children at this school have requested that the school’s approach to RSE be inclusive of LGBTQ+ relationships and free from a religious ethos. By excluding any discussion of same-sex relationships in its classrooms, Lacken NS is compounding the sense of stigma and exclusion already felt by many LGBTQ+ children and families in the Irish education system.

"A survey by BeLongTo in 2019 found that 73% of LGBTI+ students feel unsafe at school," Graham added. "This is a clear denial of education for Irish children and a denial of dignity for same-sex couples. Taxpayers’ money is being used to deny the kind of factual and inclusive education that parents have explicitly called for.”

“68.4% of voters in Wicklow voted in favour of allowing same-sex couples the right to marry, significantly higher than the national average of 62%," David added.

"There is overwhelming local support for rights for same-sex couples. Yet the local school pretends that these relationships do not exist. Minister for Education Norma Foley has previously claimed that RSE policy in each school “is developed in consultation with the entire school community”. However, this is a clear case where the express wishes of the school community have been completely ignored.”

The Education Equality is urgently calling on the Government to remove religious influence from the school curriculum, particularly in the area of RSE.

The group believe that schools should be compelled to confine religious instruction and worship to a period at the end of the school day, outside core school hours – on an opt-in basis rather than on an opt-out basis – in order to uphold families’ constitutional and human rights to freedom of religion and belief.

Education Equality’s petition to move religious faith formation to the end of the school day has collected over 7,000 signatures, which you can sign here.

The Catholic Church has long been accused of utilising public education as a tool to indoctrinate children, regardless of their faith or religious preferences.

“95% of Ireland’s publicly funded schools remain under private religious control, with 90% run by the Catholic Church,” David Graham explains in a wide-ranging article written for Hot Press. “Most Irish children’s education still comprises religious evangelisation, dogma, and prayer. To pass the school gate is to step back in time.”