All restaurants, bars and live music is being shut down again from 3pm on December 24, following the introduction of a waft of new restrictions to combat the surge in the number of coronavirus cases. But we’re not in as bad a place as the UK, with countries all over the world imposing a travel ban on anyone coming from the UK.

Level 5 lockdown restrictions will be re-introduced in Ireland in a staggered process, beginning from midnight on Christmas Eve.

The decision was announced by the Government following the meeting of the Cabinet this morning. The re-imposition of extreme lockdown measures had been widely predicted, with the very significant increase in the number of cases being confirmed on a daily basis in Ireland over the past two weeks.

While the measures are initially designed to last until January 12th, there is no guarantee that they will end then, with the Tánaiste, Leo Varadkar, forecasting that they might potentially last for two months – that is until towards the end of February.

The most dramatic effect of the government decision is that the hospitality sector – restaurants and bars – will close again, except for takeaway, effectively until further notice. That means also that live gigs have also been put back on complete hold, with a sea of uncertainty surrounding the whole live music industry sector again.

In a sweeping move that will upset many, indoor mingling of households will be limited to two, from December 27th – the likelihood being that all mingling will be banned from January 1st.

The government has also announced an extended travel ban from the UK, to run till December 31st. This is in response to the emergence in the UK of a new strain of coronavirus, which is said to be more infectious than the existing strain. This hypothesis had been used to explain the huge surge in the number of positive tests in the UK. However, many scientists remain sceptical about the issue of infectiousness, the underlying suggestion being that the spin may be a political one, designed to mask the reality that a major surge may have been a direct outcome of the policies being pursued by the UK government under Boris Johnson. 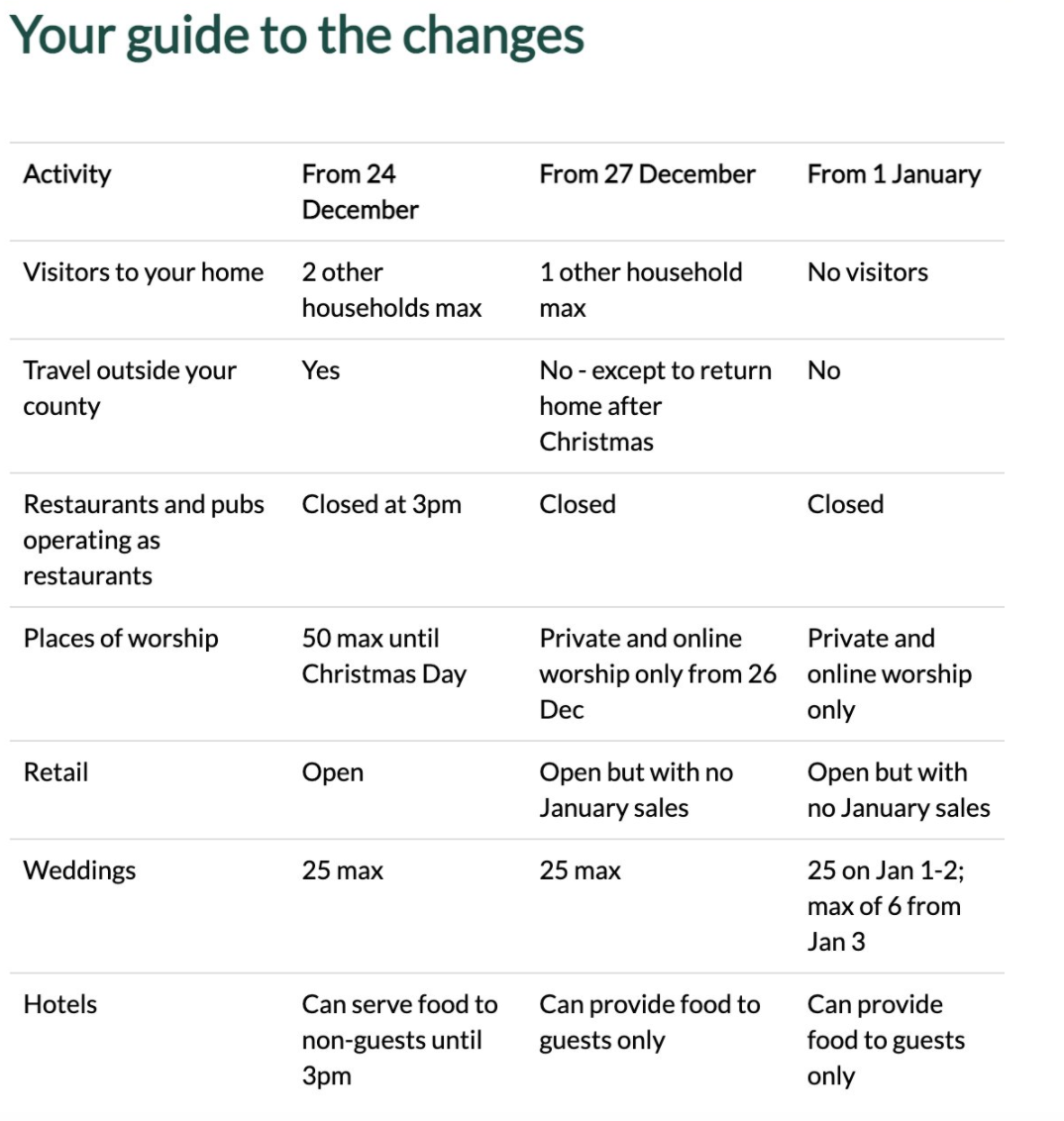 Speaking at Government Buildings today, the Taoiseach Micheál Martin confirmed that there is no evidence yet that the more virulent strain of the coronavirus identified in the UK is here. However, he stated that "the safest and most responsible thing to do is to proceed on the assumption that it is already here.” He added that the Government would meet the new threat “aggressively and head-on."

Many in the UK, meanwhile, seem to be waking up to the reality that Britain’s management of the threat of Covid-19 has been among the worst in the world, in terms of both the number of infections, and the number of deaths, per capita. Indeed it remains the case, that if all of the deaths as a result of Covid-19 are included – rather than those officially acknowledged in the Government figures – then Britain indeed well be bottom of the world table, despite being the fifth richest country.

Across the world, in media Britain has – perhaps unfairly – been renamed Plague Island, but there is no disputing the appalling statistics. Daily cases in the UK have risen from just over 22,000 to 33,364, with the average number of daily deaths running at 255. Northern Ireland remains a real trouble spot, with an average of 555 cases daily – approximately the equivalent of 1,500 cases in the 26 counties.

Not that the Republic can afford to be complacent. The word is that new cases in Ireland are likely to top 900 today – and indication that worse may yet be to come before the new restrictions announced by the Government have a chance to take effect. A rise at the rate which has applied over the past week would see the number approach – or even exceed – 1,000 on Christmas Eve.

Under the new restrictions announced today, people are allowed to travel beyond country boundaries – but only until December 26th. The government has also effectively cancelled the post-Christmas annual sales in retail outlets all over Ireland.

The new restrictions announced by the government are broadly in line with what was recommended by NPHET, according to the Minister for Health Stephen Donnelly. He added that they were "a mark of how quickly the situation is changing.”

The first vaccination in the Republic will take place on December 30.

There has been reassurance from the CEO of the HSE Paul Reid that the health service is not being over-run, and the number of patients in ICU has remained relatively stable. However, that may change. All in all, it does not have the makings of a Happy New Year...

Taoiseach Micheál Martin says there is light at the end of the tunnel and vaccines are on the way. "Vaccinating millions of people will take time and in the meantime, we have to be very vigilant," he says | https://t.co/YYqGprOD9w pic.twitter.com/7f3Yz812it

The Whole Hog: The 10 Big Issues We’ll Wrestle With In 2022
England’s to end mandatory face coverings in public places & Covid passes
Biden and Boris Johnson agree to hold G7 summit on Afghanistan
Peugeot 308: "The French manufacturer bursts out of the gates with a five-door hatchback"
Man arrested for murder of 87-year-old Clare man in London
Budget 2023 will reduce college costs says Minister Harris